More than ten years ago, after engaging in almost three years of fruitless warfare with a particularly cunning neighborhood squirrel (nicknamed Macgyver), I was inspired to pen this little poem out of a sense of utter and complete frustration. The illustration accompanying it is an original watercolor by a very talented Pembrokeshire artist, Gareth Hughes. 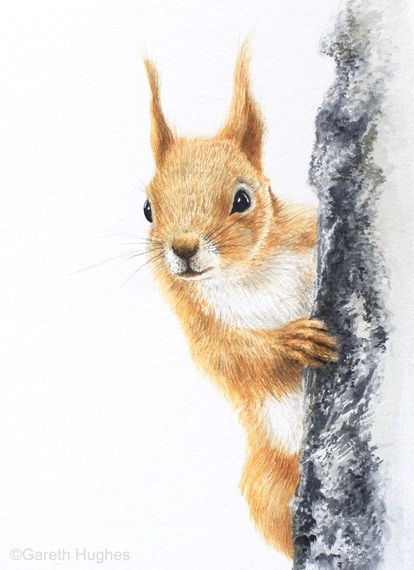 ODE TO A SQUIRREL

With beady eyes and bushy tail
My garden beds thou doth assail
And busy little furry paws
Tipped with Wolverine-ish claws
Through every day, from break of dawn,
Dig holes by hundreds in my lawn.

In autumn while I’m planting out
My bulbs in borders ’round about,
Though far away you seem to be
I know you’re spying from a tree
For when I’m done, it’s always fated:
Those nice new bulbs get excavated!

Each year when summer’s bounty ends
I try to feed my feathered friends
But it should come as no surprise
That it’s a futile exercise
For there’s no feeder yet conceivable
That any squirrel has found un-thievable.

Though I don’t mean to sound contentious
I just don’t care for things rodentious.
What evil plots, what plans insane,
Are hatched within that squirrelly brain??
I swear that all you little beggars
Are mini Arnold Schwarzeneggers!

I’m certain, when this earth is headin’
At full-tilt speed toward Armageddon,
Who’ll survive the ending of the world:
‘Twill be the Cockroach and… the Squirrel.

4 thoughts on “Ode to a Squirrel”