What’s even better than a beautiful garden? A beautiful garden with beautiful cats! Longwood Gardens in Kennett Square, PA, one of America’s best display gardens, fits that description perfectly. What amazes me is that until recently I didn’t know about the famed Longwood Cats.

Cats have been a feature of Longwood ever since 1984, when its director Fred Roberts decided that the staff could not only keep a pregnant stray female found on the grounds but also that having a permanent group of resident cats would be a great approach to rodent control. The dozen or so cats – all of them originally strays or ferals – have specific areas and/or buildings within the Gardens and are fed, housed and cared for there by assigned human staff members. They receive veterinary services including spaying, neutering and vaccinations, and are beloved by Longwood employees and visitors alike.  Let’s meet a few of them (past and present.) 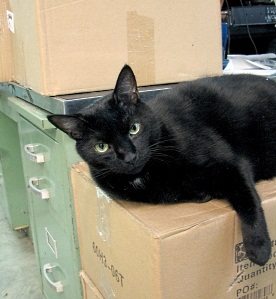 You can find Boca, with his sleek black fur and piercing green eyes, in and near the Longwood Gardens Gift Shop. He’s a sociable cat who politely greets visitors with a “hello” meow. In fact, he’s so vocal that he was named for it: “boca” is the Spanish word for “mouth.” Clearly he’s also a born supervisor, as shown in these photos. Gotta keep that inventory up! 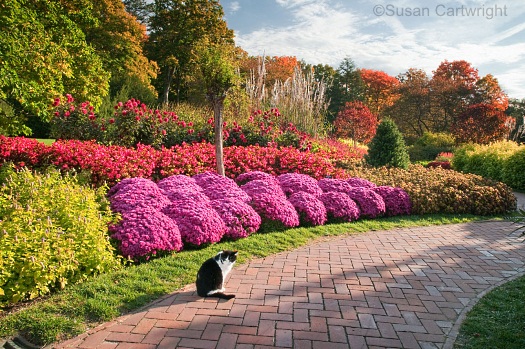 Such a sharp dresser as the tuxedo cat Iggy would look great anywhere, but he makes a particularly arresting picture along the blazing-with-color Flower Walk. He was named after Baby-Boomer rocker Iggy Pop, and claims the Gardeners’ Shed as his personal bedding-down domain.

A “longhair” of a different type is Vincenzo, who stands out even more because most or all of the Longwood cats tend to be shorthairs. 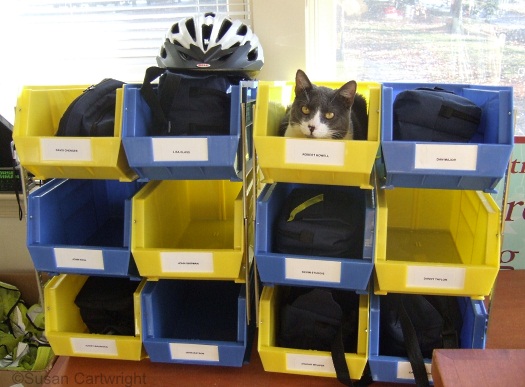 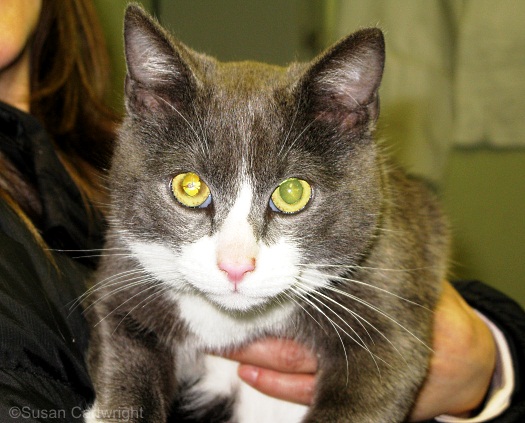 Although easily confused with Sarge whom he almost identically resembles, Jerry has a pink nose whereas Sarge’s is dark. Jerry has a partner-in-crime named Ben (of course!) but apparantly he is camera-shy and so I could find no photo of him.

Noel is a longtime resident and patroller of the Idea Garden and the Conservatory. Susan Cartwright is the caretaker of Noel and her “work partner” Smokey. 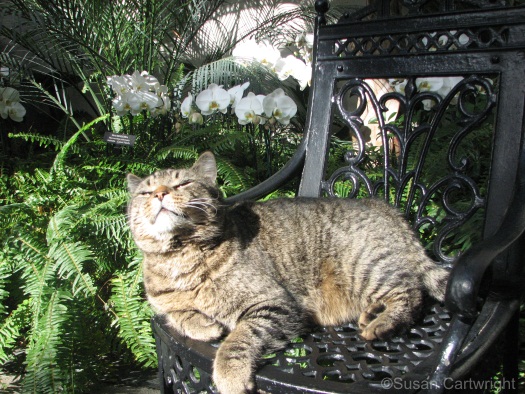 Although not identified by name in the photograph, I have a very strong hunch that this may be Noel also, sunbathing in the Conservatory.

And speaking of Smokey, here he is, looking picturesque with a backdrop of golden autumn leaves. 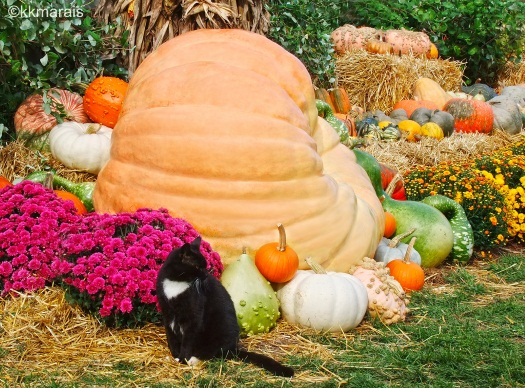 Very similar to Smokey but caring for another area of Longwood’s 1000+ acres is Jojo, another tuxedo cat but this time a female. She and her sister Smitty patrol the nursery area. 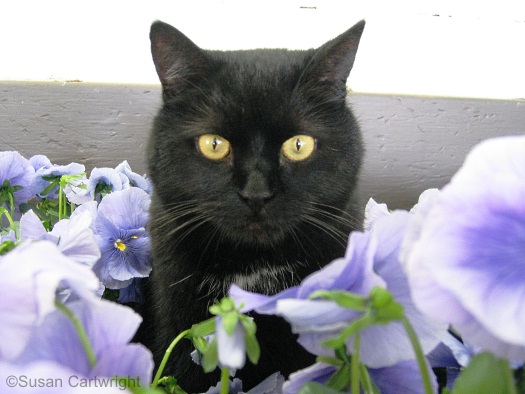 Here’s Smitty proving once again that basic black goes with anything and everything. 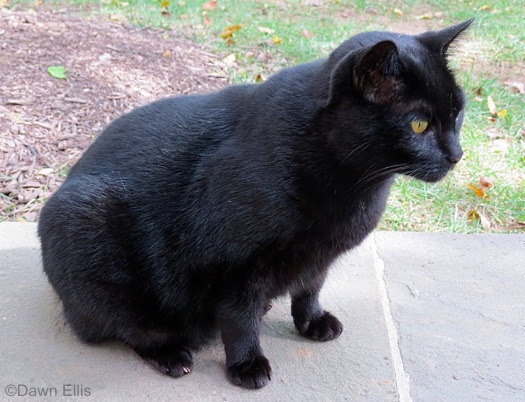 You can’t get more “basic black” than Spooky! This is one dramatic feline for sure. 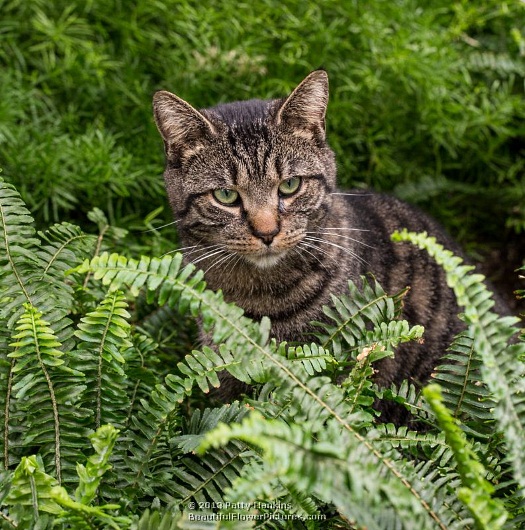 The brown tabby Mulligan makes an artistic composition among the ferns.

Persimmon is easy to spot anywhere because of her luscious coloring. 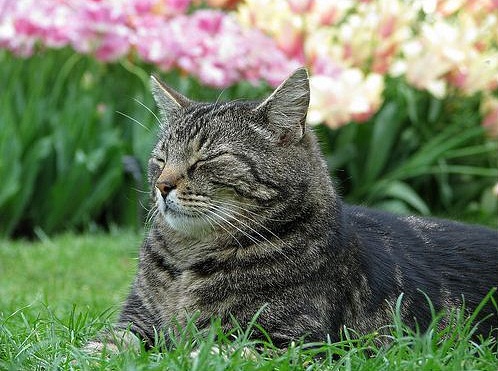 Paulie enjoys soaking up the sun amidst the spring floral displays.

The Hillside Garden, located adjacent to the Chimes Tower and its nearby stream and waterfall, was the favorite haunt of the little tuxedo Rebar.

The next three cats (a tortoiseshell, a silver grey, and a white) were not identified by name. 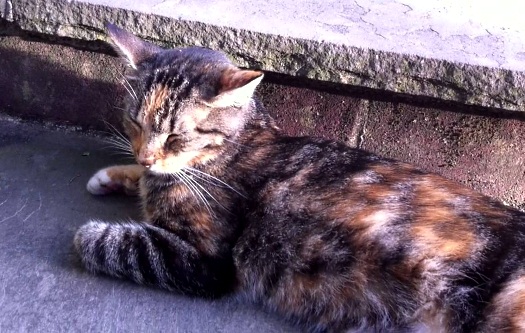 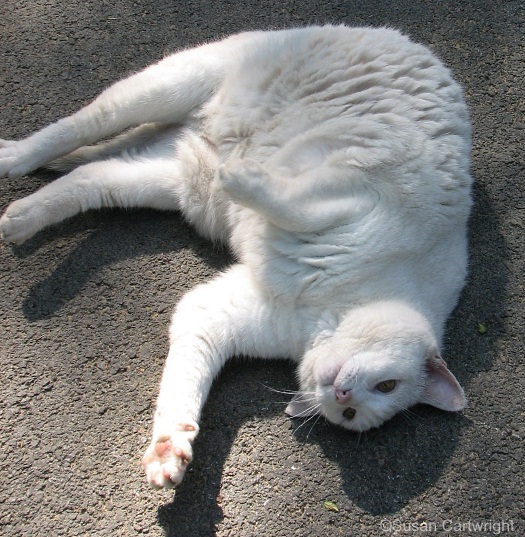 Perhaps the most famous Longwood Cat was Belin whose purview was the Pierce-Dupont House. Named after Pierre Dupont’s wife Alice whose maiden name was Belin, this male tabby was generally regarded as the “head resident Longwood cat.” Incredibly mellow and gentle, he was rescued from a dumpster as a kitten in 2004. Although he did not approach or greet visitors, he took continual petting and fussing-over in stride without ever a whisper (whisker?) of complaint or resistance – even from rambunctious youngsters. In fact, a favorite place was right near the entrance door to the House, where visitors could not fail to notice and pet him. Sadly, Belin passed away in November 2015 after a short illness.

Although this sign on the Longwood grounds states that none of the cats wear collars, this policy was changed in 2015 as a result of an incident involving Belin. In March of that year Belin was taken from the grounds by a woman visitor who put him in her backpack and brought him home with her. One version of the story has it that upon telling her friend of the “rescue of a stray cat at Longwood” she learned that the cats there do belong to the Gardens and promptly returned him the next day. The other version has Belin traced via the security staff and cameras that are set up on the grounds. Either way, he was returned safe and sound within 24 hours. But the Garden then decided that such misunderstandings are best avoided and as a result all of the Longwood Cats now wear a nametag collar identifying them as such.

3 thoughts on “The Cats of Longwood Gardens”