In order to keep from being driven insane this summer trying to maintain a beachhead against the hordes of weeds infesting the Temporary Garden, there were only two alternatives: chemicals constantly applied, or a budget-busting amount of mulch. Once the humidity and mosquitoes arrive with a vengeance in June (ours feast all day long, not just morning/evening) my daily gardening time limit shrinks to about an hour which would be totally useless under the current weed-circumstances.

I’d already gone through three gallons of Spectracide in an effort to keep the spring weeds from going to seed, and now the “boys of summer” are beginning to appear; so, mulching was clearly the next step.

My lawn cutting guy quoted me $850 to supposedly “mulch everything” after I made it clear (or hopefully clear; he has little English and I have zero Spanish) that I wanted shredded 100% bark mulch that is absolutely not dyed. Never having ordered mulch before, this sounded pricey to me and I was also very concerned that he hadn’t really understood what I wanted, nor my insistence that the mulch not come from the Town facilities – a practice rampant among lawn services hereabouts because it can be obtained much cheaper than anything sold commercially but is not something you want to apply anywhere close to a residence.

Next I got a quote from the service who did the fall cleanup here last year (which generated 47 large bags of oak leaves, plus the three giant grasses, which is why I couldn’t even begin to attempt it myself). He told me I’d need a good eight yards, quoted a price of $640 for what he called “triple shredded bark” and assured me that it was neither dyed nor from the Town’s supply. I figured that was about $200 less than the fellow I had qualms about, so said okay. He said I should indicate the areas to be mulched in order of priority and “we’ll see how far it goes”. The job was done on Friday morning.

Well, he certainly wasn’t kidding about “triple shredded”… this is two-thirds of the way to being topsoil, in my opinion.

But with eight yards of it having been dumped in my driveway I was hardly in a position to tell him to take the stuff back.

Oh well, I thought, at least I won’t need to worry about it containing the plastic-bag shreds and other foreign matter with which the Town product is loaded. It took three men three hours to spread the mulch over all of the front yard beds plus four of the planting beds in the backyard. Problem was, there was nothing left for any of the raised beds, nor for the beds along any of the perimeters, nor for the remaining other four planting areas. After they left, the closer I looked at the mulch the more I was convinced that it will probably break down and disappear entirely in less than six months. Applied, it looks far more like soil than mulch. If this mulch were to be given a commercial name it would probably be called ‘Repeat Business’! It was clear I needed to get more mulch, but definitely not from him.

One of the local nurseries had a very nice shredded cedar bark mulch in bulk at $43/yard. I hoped that three yards would take care of all the remaining beds in the backyard, plus perhaps the most problematic part of one of the three perimeter beds. Delivery would be $45 additional. The truck arrived to dump it in the driveway on Saturday midday. Now this was what I’d been hoping to have gotten from the landscape guy! Nice and clean, substantial enough to last a while, and smelled lovely as well.

So… now to move the stuff to where it needed to go. I do not have a wheelbarrow – have never in my life been able to master driving those things – but do have a garden cart. Nothing wheeled can get into the raised beds anyhow, so I devised a method of filling my two flexible plastic tub-trugs (eight shovelfuls of mulch into each) which I then trundled in the cart to the various beds, lifted and dumped out, and spread properly around the inhabitants. 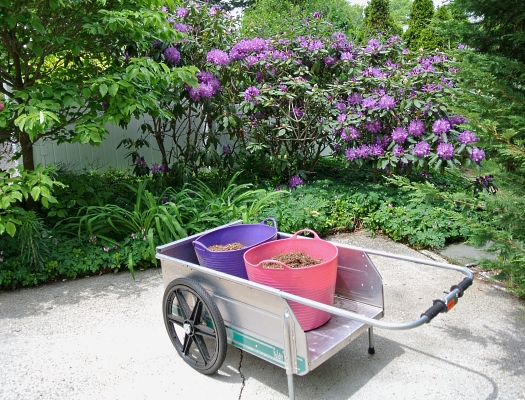 My high-tech mulch-delivery method, posed fetchingly near a color-coordinated rhododendron.

It took 6 ½ hours for me to distribute the three yards (okay, so I’m not the Incredible Hulk.) Long story short, it covered all the remaining individual beds but there was nothing left for the perimeter beds which would probably have eaten up another two yards themselves. Those areas will get sprayed, because neither my back nor my budget can stand the alternative, LOL.

You know, it’s fascinating what six-plus hours of doing nothing but hauling mulch can do to the human brain. By hour #3 I was inventing cute little ditties such as “I’ve been working on the mulch pile/All the livelong day/I’ve been working on the mulch pile/Just to make it go away…” and by hour #4 I was counting the steps from mulch pile to whatever bed I was working on, out of morbid curiosity as to how many miles I was logging (too damn many).

Next I decided to mentally calculate the cost-effectiveness of hired versus self-installed mulch:

Of course, the only thing that really matters in the end is how well either product will suppress weeds for at least the next 12 months; everything else is just mulch ado about nothing. 🙂

2017 UPDATE: I came to bitterly regret the endeavor described above. See my December 2017 post (The Phantom Mulch Menace) and remember it as a cautionary tale!