Recently I learned that the house at which I made my first garden (also the scene of the Great Greenhouse Debacle described here and here) had just been put up for sale; a public open house was an irresistible opportunity to see the place I sold twelve years ago. There were some interior photos in the online listing but there were no shots of the back yard/garden; that house was cursed/blessed (depending on your point of view) with a semi-inground swimming pool plus poor drainage – the entire development was built on filled-in marshland during the early 1960s – and thus the garden was entirely in raised beds. I already knew that my gorgeous big silver willow (Salix alba sericea) had been cut down immediately after the place was sold, but otherwise I had no idea if any of my other plantings were still there.

Although I brought my camera I stupidly forgot to check to make sure the memory card was in it; of course it wasn’t, and so I ended up snapping pictures with my ten-year-old LG flip-phone. 😦 Although I don’t have a “photo log” of my garden there, I did make a year-long video of it back in 1988; so I was able to grab a few screenshots of some areas to compare some things then versus now. (The resulting photos below are not good quality, due to the antiquated early 1980s video camera that recorded directly onto a VHS tape, which in the 1990s I transferred onto a DVD by now-obsolete software …. seriously, it’s a wonder that anything can be distinguished at all!)

This small cutleaf Japanese maple (Acer dissectum atropurpureum ‘Garnet’) shown soon after planting in 1988 subsequently survived Hurricane Sandy and two recent winters from hell – somewhat the worse for wear, admittedly – and has grown up into this 5-foot-tall teenager:

The current owners replaced the original pressure-treated railroad ties (which themselves had replaced the circa-1960s creosote-coated ones, ugh!) with brick in the mid-2000s. Of course back then we had no idea that the CCA used in the “better” pressure treated ties wasn’t much healthier than the stuff it replaced; luckily I never grew any kind of food at this garden.

This is Cotinus ‘Royal Purple’ in 1988, which at that time had been in the ground for only a couple of years as a very small plant… you can just about make it out behind the light pole. 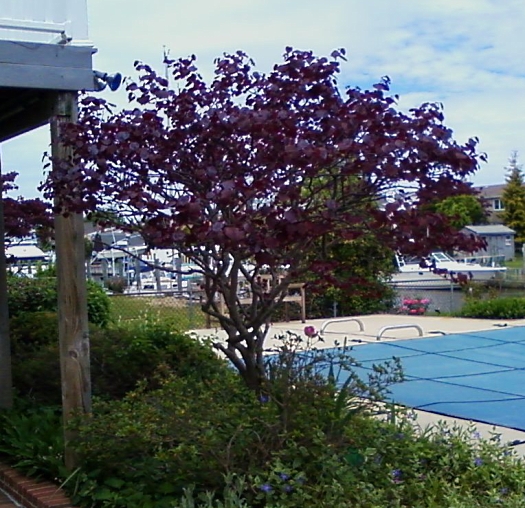 In the intervening almost-30 years it has developed interesting multiple twisty trunks. The top of the slightly raised bed it’s planted in is just about two feet above ground level; the bottom of the second-story sundeck seen to the left is eight feet high. Frankly I’m surprised the cotinus isn’t taller but perhaps the owners kept it cut to this height to as to preserve their view of the canal from the sundeck. 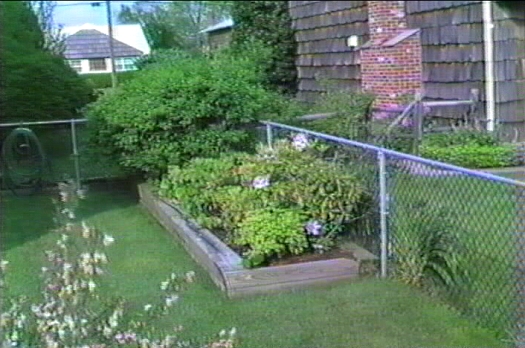 When filmed in 1988, this planting was all rhododendrons with a couple of clematis at their bases. In the late 1990s the outermost rhody (it was the variety ‘A. Bedford’ according to the narration on my video) died and I decided to put a young katsura, Cercidiphyllum japonicum ‘Strawberry’, in its place.

And this is how that same spot, and katsura, looks today! Quite by accident, one of the realtors at the open house happened to be walking past and thus gives a great idea of size/scale. A conservative estimate (because it is taller than the second-floor ceiling) is a 20-foot height; when planted, the katsura was only about 2 ft tall.

This is the white rhododendron ‘The Bride’ in 1988. The top of the chainlink fence behind it is 36″ high.

Here is ‘The Bride’ today. I’m not surprised that it’s leggy because this is a north exposure and between two houses to boot; but considering the shade cast by the houses, deck, and the massive katsura elbowing it, I am surprised it has gotten this big and flowers this well.

I planted up this area in the early 1990s (post-video) in an effort to fill an otherwise nondescript and completely shaded north-exposure utilitarian spot having soil that that took forever to warm up and dry out in spring. I bought some hostas and ferns on sale, interplanted them with with a few Vinca minor, and figured they could all just slug it out among themselves for territory – survival of the fittest! I’d say it ended up being a draw between the ferns and hostas.

I noticed that the southeast corner that once housed my first (huge mistake) sweetgum is now empty and couldn’t blame the owners at all for that decision; they probably hated the sweeetgum balls as much as I do. A yellow dinghy occupies that area now. As for the perennials that once filled the sloped raised beds surrounding the swimming pool, I didn’t see much that was mine but that may be because the owners replaced the original wood ties that formed the beds with brick-and-masonry; they left the existing shrubs but most of the original perennials probably did not survive the process. Or perhaps they simply didn’t like what was there.

The south property line which had this chainlink fence has been replaced by a solid white vinyl one, and so I wasn’t surprised to see that this 1988 bed with its planting of evergreen azaleas, Cornus alba ‘Elegantissima’, Asiatic lily hybrids, violas and dwarf Korean lilac is no longer there; that fence would have needed a lot of digging to install.

There were some changes to the inside of the house as well, naturally. The vintage Axminster wool carpeting had been removed (after 40 years of service it deserved retirement, even though it was just then beginning to show a little wear along some seams) and the oak floors beneath refinished, but the varnished wood eight-panel interior doors with brass hardware are still there, as is the solid oak door to the sundeck. I’d designed the door, and its stained glass insert which was made by a local artisan, back in the 1970s but didn’t take into consideration the fact that the door faces north and is under an eave as well; thus it never got the direct sun required to really light up the glass! The design is meant to be a stylized paphiopedilum with a fleur-de-lys in the center (well, it seemed like a good concept at the time). I’d forgotten to take a photo of the door before I sold the house, so was glad to have this second opportunity.

I was also amazed to see that all of the light fixtures I’d originally installed had been kept, including this dining room chandelier. Twice a year – in late April and early November – I removed every single piece of crystal, carefully washed and rinsed them, dried and polished them with a lint-free cloth, and reassembled them on the chandelier. It killed the better part of a day but when it was all done and the light switch was flipped, those Swarovski lead crystals were absolutely dazzling! I couldn’t help noticing that the current owners have not done a similar “spring cleaning”. 😉 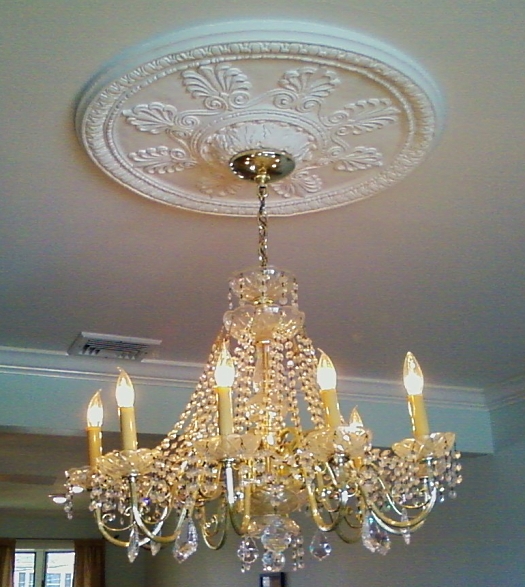 It was a bit odd to be inside the house that I’d left with very mixed feelings at the time. If you’d asked me then, I’d have said that I wouldn’t want to see it again and so I wasn’t entirely sure how I would react to a revisit. Surprisingly, only the good memories came back and none of the bad ones. There was enough of “my” garden left to be recognizable, which was a relief because to have found the entire thing ripped out without a trace would have been difficult; I spent about 18 years making that garden, little by little, and learning through experience all the time. On the way out I noticed that the custom-made house address sign that my parents had once given us as a Christmas present was still there and so my final snapshot was of that. It seemed an appropriate goodbye. 🙂

11 comments for “Revisiting a Former House and Garden”