My sort-of-success in pulling out video stills of my first garden inspired me to try the same for my second garden, which I created from a blank slate over a span of three years. Because I no longer had a video camera, the only record I have is some snapshots taken with an under-one-megapixel camera and which were later converted into a DVD slideshow….from which these captures were taken. [End of disclaimer/apology for embarassingly bad photo quality!]

The property was just a tad more than 1/8 acre (100 ft wide and 66 ft deep) and situated on a corner. The house was a small ranch built in 1950, about 950 sq ft plus a small one-car garage, being offered for sale by an elderly widow. Two huge Magnolia soulangeana dominated the front yard; according to the seller the larger one had been planted to celebrate their first anniversary in the house, and the other tree when their child was born a year or two later. I bought the house in late summer and so didn’t see them bloom for about six months….and they were spectacular! Encircling the property was a chainlink fence, probably also dating from the 1950s by its condition – and yes, the grass really was dead-brown.

The photo below was taken not long after purchasing it in August 1998. Many of the photos below have captions that I added during the transfer to the DVD slideshow. 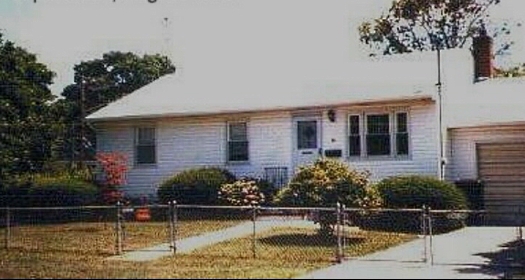 My original plan was to have a mixed border anchored by fragrant roses. This bed was 30 ft long and about 3 ft wide, running along the south property line abutting my neighbor’s driveway. I should mention that I was operating on a ridiculously small budget, which meant that to buy anything at full price was a “splurge”; there was a chain store at the time named Frank’s Nursery and Crafts (imagine a JoAnn’s of today but with plants as well) that always had a 30%-50%-off table of plants that were past their blooming prime. This was a franchise and every store manager ordered whatever plants he/she wished; some stores had better markdown rates but others had more unusual plant varieties at a smaller discount. I’d make a circuit of the various stores to see what had been freshly put on clearance and saved quite a bit of money on nice plants. Unfortunately the company went out of business by the early 2000s. 😦

Looking pretty good, only about three months later! I ended up with only two roses: Therese Bugnet and a yellow hybrid tea whose name I forget other than that it was more trouble than the eventual flowers were worth!

Of course by the following spring (2000) the border was overflowing and needed to be widened! That’s a small cotinus (‘Royal Purple’ if memory serves) at the near end.

Disaster struck the following spring in the form of my next-door neighbor getting a variance to more than double the size of their house, with most of the new square footage built over what had been their driveway. I wonder who in the Town they paid off in order to get approval for the huge monstrosity that they ended up erecting? Needless to say, the structure (two stories plus a high roof) completely eliminated my nice southern exposure and threw almost the entire side yard into perpetual shade. The side of the new addition was a mere 4 ft from the property line (which is legal in that township).

At the same time that I started digging the south border (spring 1999) I also decided that something must be done about the front yard. I’d already had someone remove the chainlink fence across the front because I couldn’t stand looking at it a moment longer. So I dug out both borders pretty much at the same time (March/April 1999). I was much younger and still had a healthy back (both statuses long gone by now!).

See the mulch piles? I thought I’d lucked out when some people around the corner had trees cut down and put up a sign “free wood mulch”. About three weeks later, carpenter ants were everywhere! They’d apparantly been infesting the trees (probably why the homeowner got rid of them) and of course I was terrified they’d migrate the short distance to my house. I spent an entire day shoveling the mulch into black plastic trash bags but now what do to with them? Luckily that neighborhood was served by a motorized trash pickup of 64-gallon containers with a 250-lb load limit, and so in less than three weeks (thanks to the twice-weekly pickup) the mulch was gone. I’m sure the carpenter ant population had a jolly time in the local landfill!

I invested in a black aluminum arch, planning to eventually have roses and clematis climbing up it. In the meanwhile I planted seeds of a Japanese morning glory which took off like the proverbial rocket. Most of the plants in the front border were shrubs and perennials but I did augment with some annuals, either from seed or flats on sale.

Naturally by the following summer (2000) I needed a little more room. A pretty sage grown entirely for its lovely foliage was the low mound of Salvia ‘Beggarten’; just past that is a dwarf pennisetum (tender here but it did survive one winter). You can see one of the magnolias in the background.

Well, of course I needed more room by the border’s third summer! Besides, I had to compensate for the ruination (sunwise) of the south border from the construction of “Trump Towers” next door. And that silly pointy curvy edge (what was I thinking??) was a nuisance to mow around.

Snapdragons and petunias filled the new space nicely, didn’t they?

Once I had the front borders up and running, so to speak, I decided to do something with the one and only private part of the property that I had.

I started by buying another arch (Smith & Hawken, on sale, free shipping, yay!) and envisioned letting a combination of honeysuckle and Clematis jackmanii duke it out on this one.

A double whammy: north wall, and shaded on the other three sides by shrubbery. At least they were all deciduous, but still… 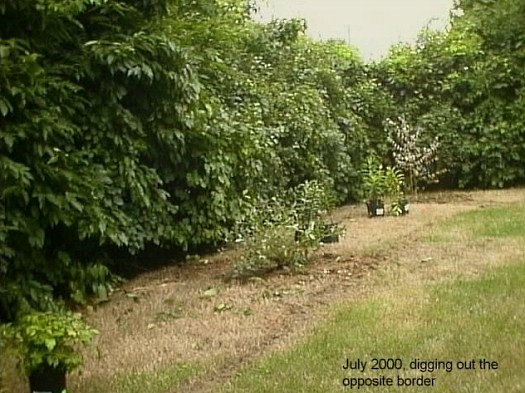 The opposite site of the garden got more light, but even with a south exposure the house and shrubbery only allowed about a half day of full sun at best. 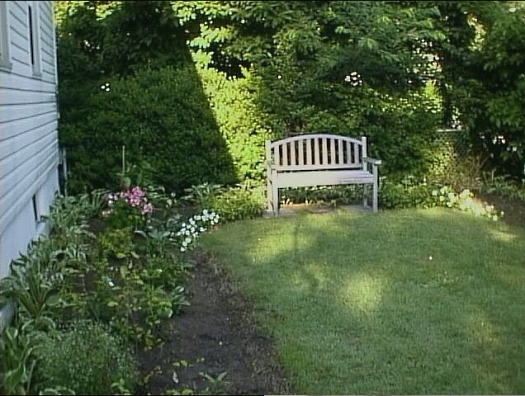 This was definitely ferns-and-hostas country but I found some phlox on sale and thought “what the heck, a few blooms are better than none!” Someone advertised “free hostas, dig your own” in a local paper and so I came, I saw, and I dug. They were big clumps, and that was when my back first began to not-so-gently inquire what the hell I thought I was doing? This photo was taken in 2000, the year after the border was dug.

Spring on the opposite side of the Secret Garden was cheerful even though I didn’t have as many bulbs as I would have liked. Nor was I able to plant them in groups as I wanted to, because the soil in front of the shrubs was absolutely filled with roots. There was no way I could get any tool even an inch into the dirt until coming out at least as far as the “military review row” distance shown in this photo.

The opposite end of the same side.

A month later, all is serene, peaceful and green.

I didn’t know it at the time but this ended up being my last photograph of the Secret Garden. A few months later my life circumstances suddenly changed dramatically and I had to sell the house as quickly as possible. In all the chaos I completely forgot to take a “final portfolio” of the garden areas. For some reason this photo ended up with a misty, dreamlike effect which for a Secret Garden I think is surely the most appropriate anyway!

The house was bought by a single working mom with a young son. I knew in my heart that she probably would have no time to care for a garden, and I was right: When I drove past the house a couple of years later the front beds were completely overgrown with weeds. Another drive-by about seven years after selling revealed that the Secret Garden area was no more: the oldfashioned shrubs had all been ripped out and replaced by a high stockade fence. And now, thanks to Google Street View, we see that things have apparantly come full circle (except for a chainlink fence) within 15 years. Well, maybe not entirely: almost all of the foundation plantings are now gone as well, for some reason. But….the magnolia’s still there….

Ah, well. To give a gardening twist to the classic Latin phrase: Sic transit gloria hortum!