I’ve discovered that there are three feral cats that frequent the Temporary Garden. Even though I can never own or even handle a cat (mega-allergies) I’m hoping to encourage these to visit more often. The reason? One word: rodents.

One of the more unpleasant surprises of the Money Pit was the fact that this very nice neighborhood has a high rat and mouse population, mostly due to the proximity of a small row of stores that includes a pizzeria, a Chinese restaurant, a bagel shop and a delicatessen. The attendant dumpsters are a permanent rodent attractant and from there they move into the surrounding residential yards. I will save the nightmare story of what happened to the Money Pit as a result of this situation, for another day; but the fact is that it’s impossible to adequately rodent-proof the house without massive deconstruction/rebuilding which I cannot remotely afford. Therefore, anything (i.e., patrolling cats) that might discourage rodents from hanging out on my property is most welcome!

I’m assuming that my furry visitors are feral because my one conversation with the next-door neighbor included his comment that there are “many feral cats” in the neighborhood. Despite his description of “many”, I’ve only seen three. They are all bicolors of one sort or another and it wouldn’t surprise me if they’re related. I’ve taken some photos, albeit always through my kitchen window glass and at distances anywhere from 50 to 70 feet from same. As far as gender, one is definitely a male but the jury is still out re: the other two! So, herewith are the Cats of the Temporary Garden:

I began seeing this cat occasionally during the recent Winter from Hell, ‘snowshoeing’ on top of some of the frozen drifts. After the big thaw I noticed that in the late afternoon, when the sun had nicely warmed the bricks of the west-facing patio, a favorite spot to rest/nap was at the base of the single step down (which probably formed a very nice warm ‘chair’ effect). One day I grabbed my camera and took a few shots through the window. 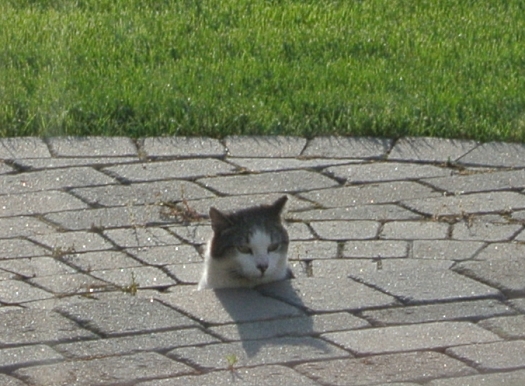 My first view of Kitty 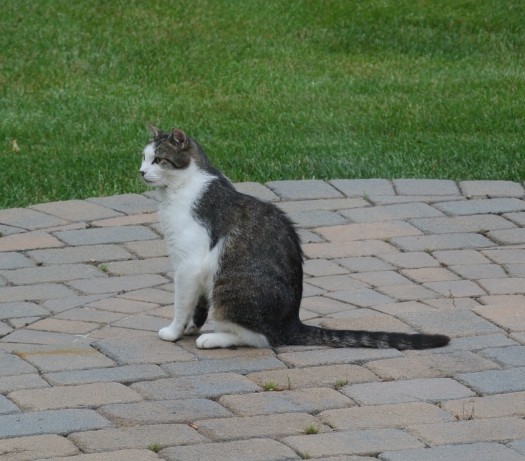 As the weather got nicer I’d sometimes find her(?) on the patio if I was weeding in the furthest part of the garden. If I give her a very wide berth, move slowly and speak softly she will tolerate my presence. When I addressed her as Kitty I seemed to get some recognition – probably because everyone in the world has probably said “Here, kitty” to her, LOL – so Kitty it is. No clue as to gender but this cat looks like a girl to me. 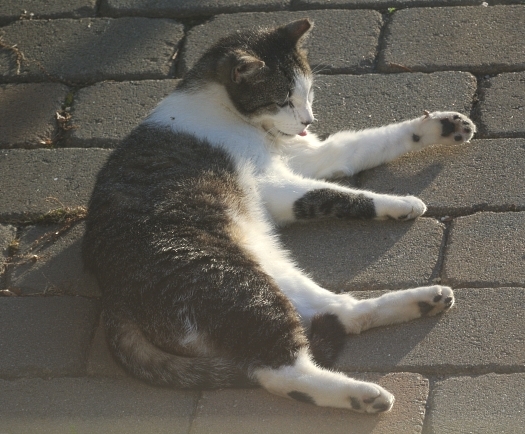 One day she decided to do her grooming very close to the kitchen window so I was able to get a nice picture of her coat pattern. She is a classic bicolor but the rather blurry cropped shot below seems to show a faint tabby “M” of sorts. According to google, her face color pattern is called a “mask and blaze”. 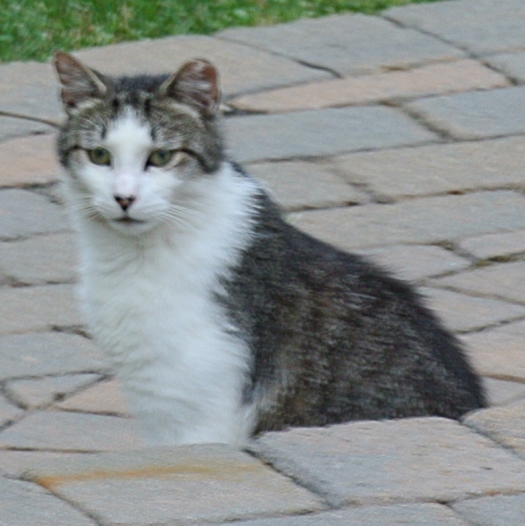 Early on I bought a packet of kitty treats called ‘Tumblers’ because they are round and roll-able, with an idea of perhaps establishing a routine of the cat(s) visiting the garden and associating me with something nice to eat (and hopefully returning at night to dispatch some rodents!) Kitty notices the treats but doesn’t seem inclined to sample any.

She does seem okay with coming right up to the house as long as she doesn’t realize I am watching from the window. One day she peered in through the glass door to the sunroom where I have some silk plants and two decorative cat statues!

I looked out the window one afternoon to see this fellow doing a veritable ‘breakdance’ of rolls and twists on the half-circle portion of the brick patio – clearly announcing to the world at large that “This is my spot!” He kept it up almost nonstop for close to a half hour! Put him in NYC’s Times Square or along Central Park and he’d make a fortune. During one of his very brief intermissions I snapped this through a window. He’s pure black except for this one white spot, which is why some people call them “locket cats”. 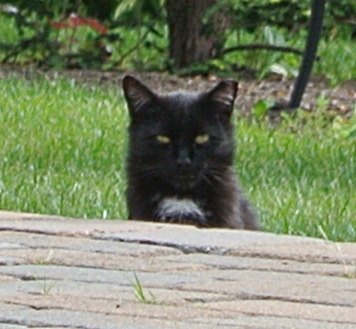 On another day I caught him in this pose before he disappeared under the nearby Japanese maple. I hadn’t come up with a name for him at that point. 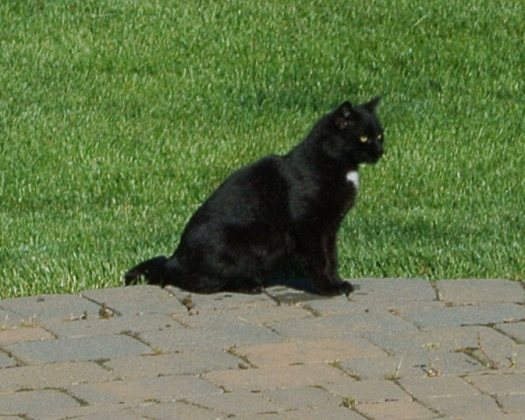 Let me tell you, this is one very smart cat. Not long afterward, I was working in the garden when we surprised each other due to my passing near an area where he was resting (FYI, an all-black cat is impossible to see when it’s napping in a shady area). He went directly to his spot on the patio and glared balefully – no other way to describe the intense and disconcerting yellow-eyed stare – at me. I carefully went to the garage and fetched the treat packet, making a show of putting several on top of the small stone bench next to the magnolia before retreating to the house to see what he’d do. I’d done the same thing several times with Kitty but with no result.

By the time I got to the window he was already circling and checking out the bench from below, then jumped on it, investigated the treats and wolfed them down. He then stared at the house intently for several minutes before departing the premises for the day.

I didn’t see him again for about five days and again it was an encounter in the garden. I was wearing my usual gardening clothes and wondered if he would recognize me. Definitely, because after a few moments of staring he went directly to the stone bench, jumped up and examined it. Not finding any treats there, he then fixed me with an accusatory Piercing Glare. Naturally I apologized for the lousy room service and went to fetch the treat package forthwith. By that time he’d gone to his spot on the patio and watched as I carefully rolled some treats toward him, remained for a few moment and then walked away. As I made my way back to the garage door I glanced backward was was amazed to see him slowly and hesitantly following me at a distance. He was clearly too nervous to come closer than about 6 feet (spraying several hostas during his halting approach, which is how I know he’s a male, LOL)

I was so impressed with his mental prowess of recognizing me and connecting me with food after only a single encounter (supposedly a cat’s short-term memory is about 16 hours, certainly not a span of several days) that I named him Sheldon, after the Big Bang Theory character. This seemed especially appropriate given the whole “this is my spot” routine and his apparant personality: brilliant but rather skittish!

Sheldon visits far less often than Kitty but when he does, he will tolerate my presence at a closer range than she will. He hasn’t yet repeated the following-me act yet, although he absolutely recognizes the sight and sound of the treat packet.

I’d seen this cat very very rarely and always from a window as it trotted quickly along the far back property line shrubbery. From that distance of about 130 ft it was hard to see anything but white. However, just the other day I surprised him in a grassy area – he almost bolted but when I when back to the garage and then returned with the treat packet, he stayed put…..but just barely. I left a few treats which he didn’t seem at all curious about, so I went into the house and to the window with my camera. 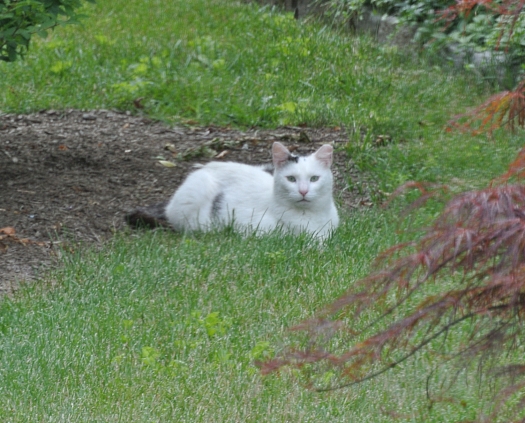 After a short time he left to utilize a likely-looking “facilities” spot in the side border, which luckily is not a place that I have to weed, LOL. This allowed a better view of his coat pattern which is sometimes called ‘magpie’, ‘harlequin’ or ‘van’ (as is this head color pattern) but are generally grouped under the heading of “piebald” patterned cats. 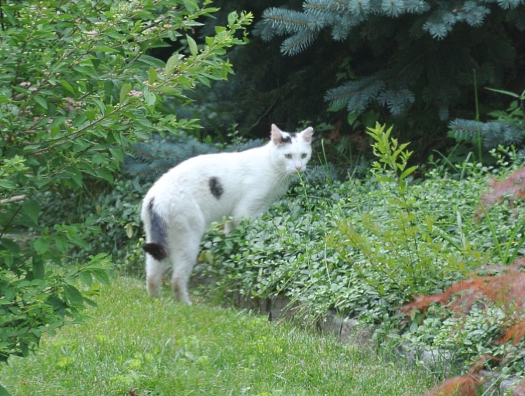 I was so intrigued by the color pattern that I did some research; the book Genetics for Cat Breeders by Roy Robinson (1999) mentions that: “….the almost all-white cat of genotype aaSS, with a black tail and one or two spots of black fur on the head and body, is quite an attractive animal and one which some people consider should be recognized as a breed.”

It’s definitely unusual and so I decided to name this gender-unknown cat ‘Pie’ (another stunningly unimaginative name but oh well, at least it’s unisex LOL). 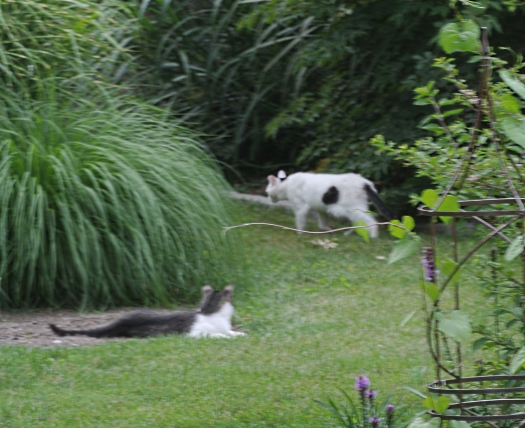 It’s interesting that I’ve only once seen more than one cat in the garden at the same time. It was the same afternoon that I snapped the pictures of Pie and was just about to leave the window when I saw Kitty emerging from the side shrubbery. She approached Pie but they didn’t touch – my sense was that they know each other but aren’t constant companions. Kitty settled down in front of the miscanthus clumps, which seem to be a favorite sheltering spot for her, but when Pie ambled off toward the back of the garden she followed, and they both investigated the rearmost raised bed…..Pie settling down near a group of balloon flower (mostly likely Platycodon grandiflorus ‘Mariesii’ from the color and size) while Kitty enjoyed an early-evening snack of nearby catmint! 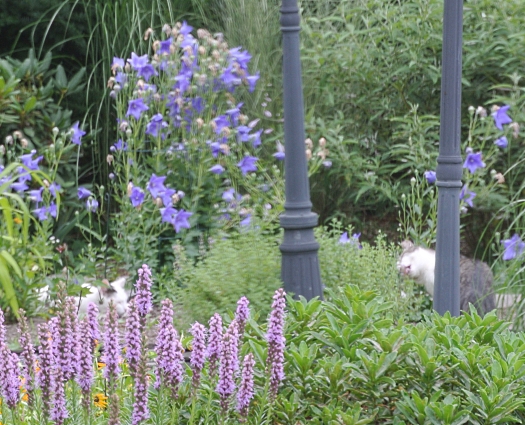