More than a month has passed since my last photographic walkabout, and here we are at midsummer already – where does the time go?? These photos were taken at various times between mid-June and the end of July. 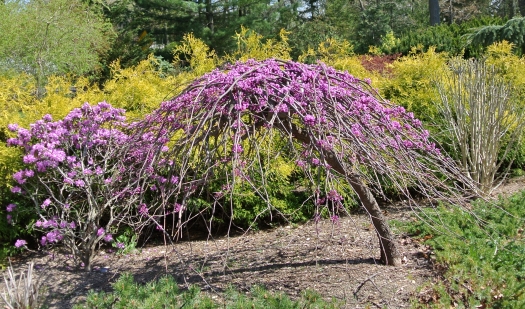 I’ll begin by rewinding the clock to early May’s photo of what I’m almost certain is Cercis ‘Lavender Twist’. Its height, by the way, is just a skootch over 3 feet. 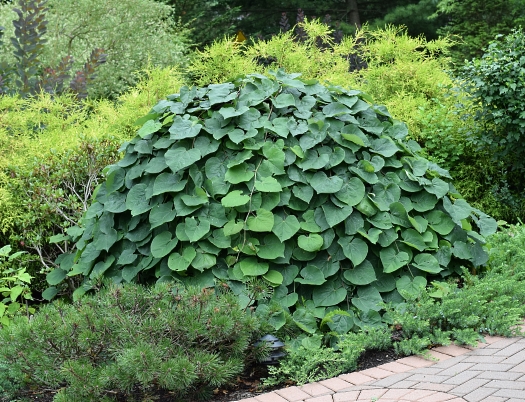 By the end of June, however, it could have auditioned for the title role in ‘Under the Dome’!

The individual leaves are rather large (7”x7”) especially considering the shrub’s small stature. The layered and overlapping habit means that this is probably as close as the plant kingdom can get to mimicking “house siding”! Rain literally rolls off the leaf surfaces and away, yet the shrub shows no sign of dehydration even though the only watering it gets is provided by Mother Nature. And somehow I have a feeling that anything could be lurking under there…

Why the POs (prior owners) would deliberately put a shrub like this in such a restricted/crowded place – hemmed in by a chamaecyparis hedge, shouldered by a rhododendron and a hyperactive Hibiscus syriacus, and with pines and junipers nipping at its heels – is beyond me. I’ve had to repeatedly save the latter two from impending death-by-smothering, because the redbud doesn’t seem to realize that it isn’t getting any taller. Or maybe it has an identity crisis and thinks it’s a groundcover. In any case, it would have been much better served if it had been planted as a specimen. 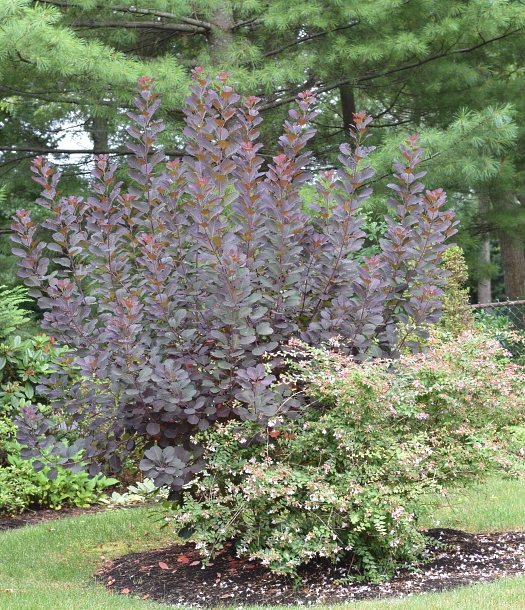 Speaking of foliage, I had a wonderful photo of glowing, backlit cotinus leaves which has apparantly disappeared into a black hole. (The photo, not the shrub.) I do have this one of the smaller of the two cotinus in the front yard. That’s a variegated abelia in front of it… probably either ‘Kaleidoscope’ or ‘Confetti’. 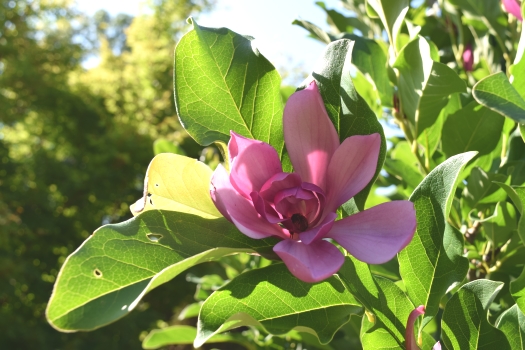 The small (about 6 ft tall) Magnolia soulangeana has unaccountably decided to produce about a half dozen surprise flowers on the very tips of the topmost growth. Perhaps the nearby late June/early July tardy Cornus kousa inspired it? 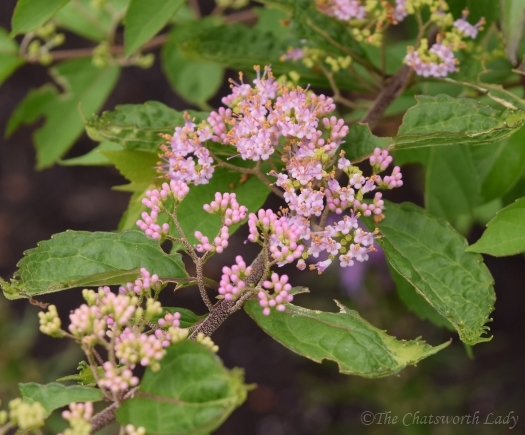 At least I know (from seeing last year’s berries) that this is Callicarpa bodinieri var. giraldii ‘Profusion’. Besides, I’ve grown it twice before, LOL Here the flower buds are just beginning to open. 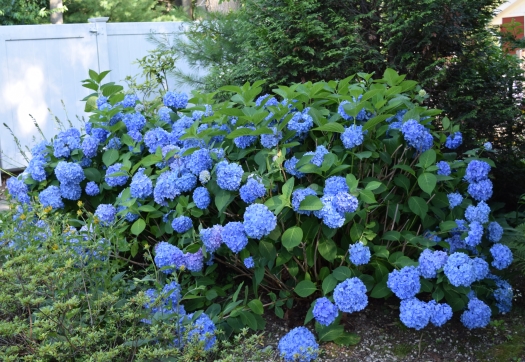 The first of the several hydrangeas to flower, and by far the bluest. It’s also the largest and probably the oldest. This really is a super-rich solid blue, and I don’t add a thing to the soil. Best guess as to variety? Enziadom, or Blue Billow. The photo was taken on July 10th. 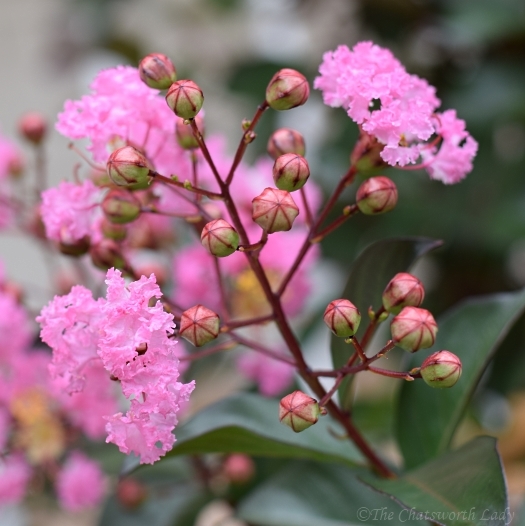 I think the buds of crape myrtle (Lagerstroemia) are just as interesting as their flowers. 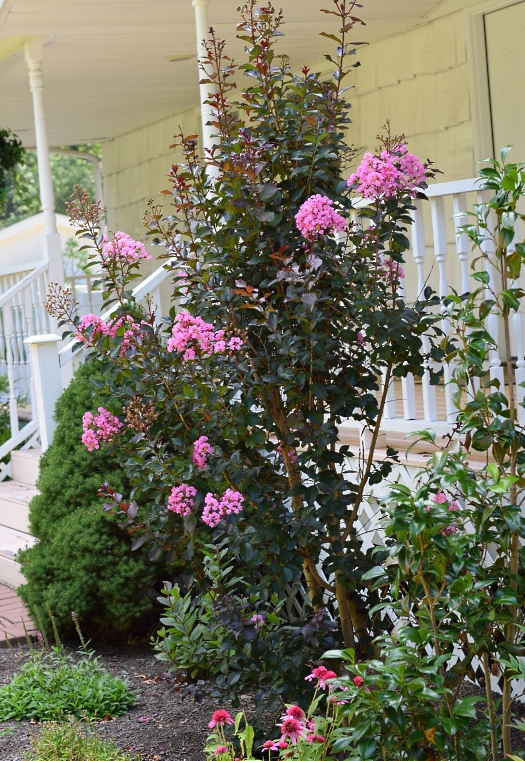 There are three crape myrtles on the property; this one is directly in front of the east-facing porch and gets the fewest hours of direct sun. It’s also the only one that is even thinking about flowering! 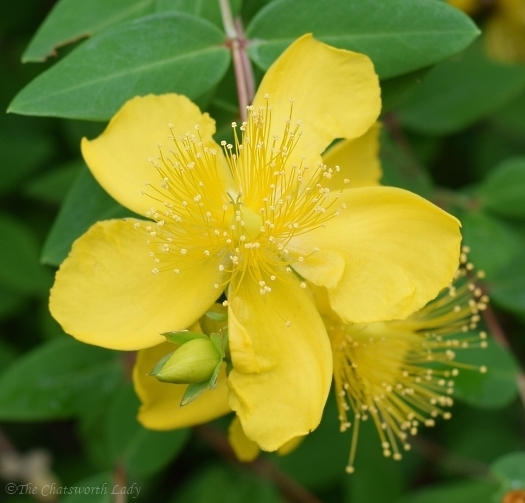 Although I’m aware that many gardeners don’t like Hypericum calycinum, I absolutely love the form and color of its flowers. There are very few yellows that I like, and this is one of them. The fact that the shrub itself looks like hell (in my zone) from the first frost until early June, and can be killed to the ground in even a semi-harsh winter, is something I conveniently forget while admiring the flowers and subsequent bright red fruits. 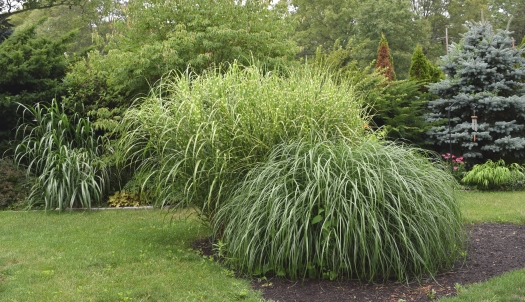 The POs liked grasses. Big grasses. Humongous grasses. That is fine and dandy for a big husky male who is handy with a chainsaw, but neither description applies to yours truly. This means having to pay somebody to cut down these hulks in the fall, and if I was intending to stay here they would be history. (I had no idea they were here, having seen/bought the place when under 3 feet of snow and after they’d been cut down). Vining euonymus have self-sown into the middle of all three of these; I let them be, because I know an impossible task when I see it. 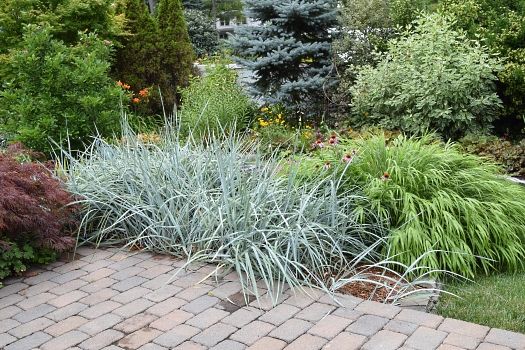 There are also a few smaller grasses that at least I can deal with myself, such as this exuberant blue lyme grass. Another case of ridiculous botanical nomenclature-changing: What was wrong with the original Elymus glaucus? Now we must call it Leymus arenarius. “Leymus” sounds like something that should be jumping about in the jungles of Madagascar. And to dump “blue” (glaucus) in favor of “sand dweller” (arenarius)? Bah humbug! Oh well. I do love blue, especially powder- or steel-blue, and so I can even forgive this plant’s sloppy-floppy nature. 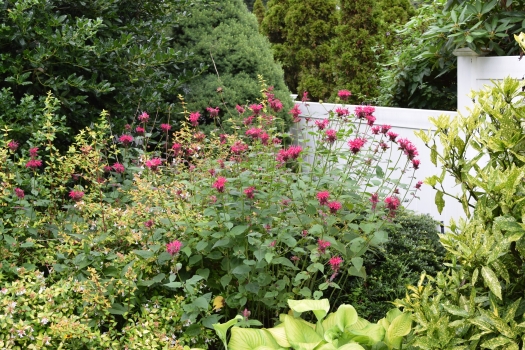 Walking through the gate to the side and back of the property, there’s a stand of monarda. Jacob Cline? Probably. I’m surprised it’s doing this well, because this is the north side of the house and this corner gets very little direct sun due to the surrounding fences, large shrubs, trees, and the neighbor’s house. Love the fragrance of Earl Grey tea that emanates from the foliage; it would probably be stronger if the plants were growing in full sun. 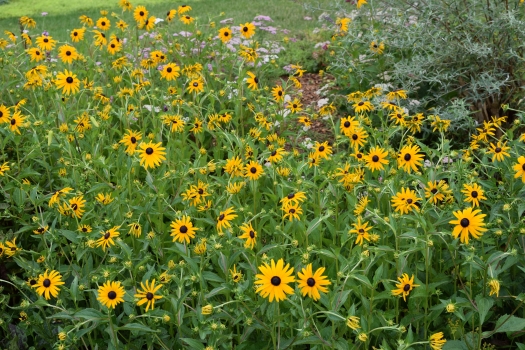 It’s July, and so there is rudbeckia. Elsewhere there’s also Coreopsis grandiflora and far, far too many tawny daylilies. In fact the place is loaded with them. *sigh* It’s also stuffed with another invasive orange flower which I consider even worse. And of course my least favorite flower color has always been – you guessed it – orange. I don’t mind the rudbeckias (much) although my own choice would have been ‘Chocolate Orange’ which is very heavy on the “chocolate” part of the name (you can see it in my Chocolate Garden post). But these are undoubtedly cheerful. 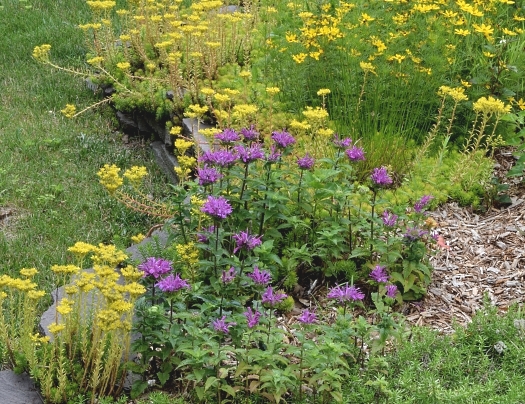 Along the side of one of the raised beds is this pretty combination of a dwarf magenta-purple monarda (which is probably Monarda didyma because it flowered almost a month earlier than its’ tall red relative even thought of starting) and yellow sedum. The sedum is probably S. reflexum, and no doubt that’s Coreopsis ‘Moonbeam’ at the 12-to-1 o’clock position. That coreopsis is another yellow I do like. 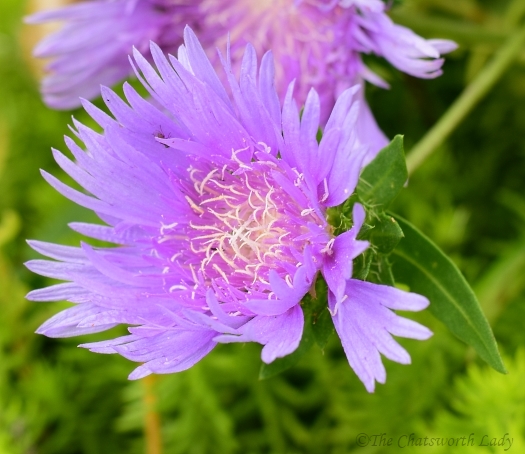 Elsewhere in the same bed and also surrounded by the yellow sedum, is Stokesia laevis. I love the feathery effect that the flower has, as well as its color. 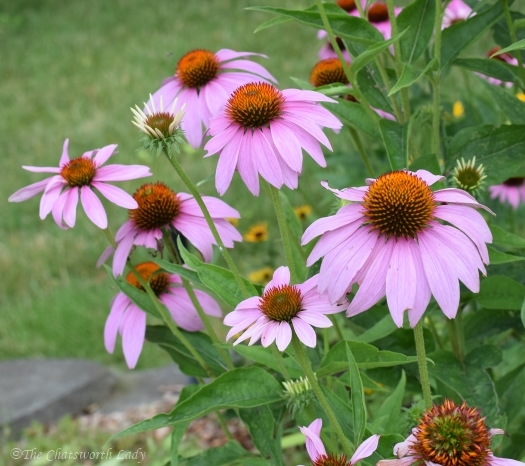 I realized after I took this photo of the echinaceas that it displays every stage of the flower’s development, from initial bud-opening to cone formation. 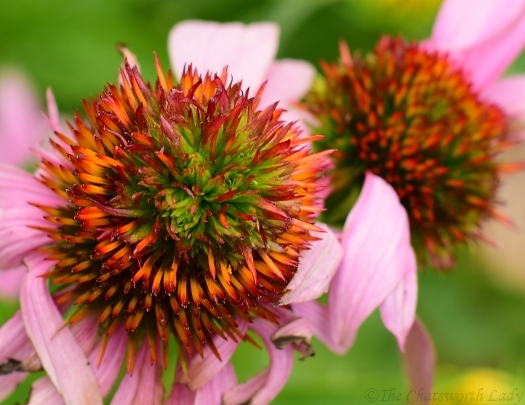 And speaking of those amazing cones… what an explosion of texture and color! 🙂 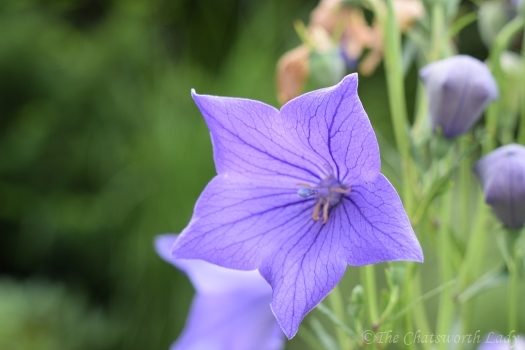 What’s not to like about balloonflowers? I’ve grown the doubles in the past, and they are pretty, but to my mind the classic single blue is the best. 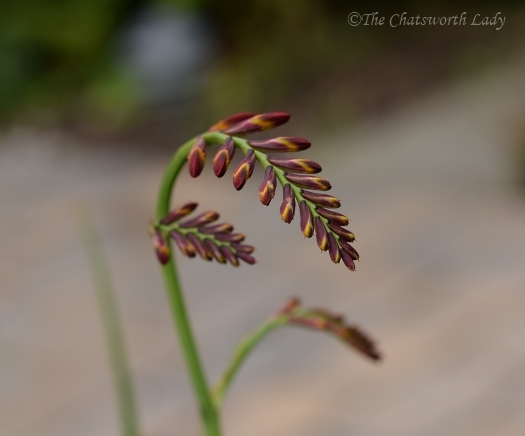 Ah, we  have the promise of crocosmias – but what color will they be?? My money’s on red, and my cultivar guess is ‘Lucifer’; what do you think? 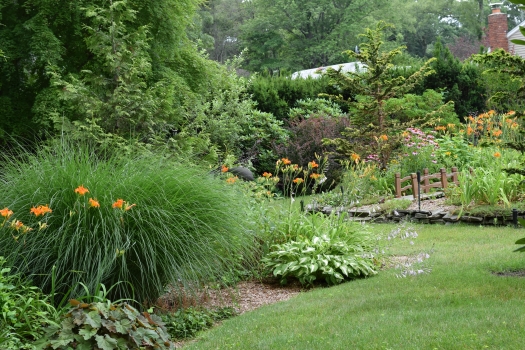 This photo shows another of the midsize grasses, which is nevertheless intimidating a rather wimpy yellow buddleia adjacent to it. The buddleia was the lankiest, scrawniest thing imaginable and so I cut it back severely last fall. It has sulked, to the extent of not even producing the slightest bit of new growth until mid-June. It had better get a move on, before the grass decides to swallow it up!

The little wooden bridge, left by the POs, takes the place of an opening between the two raised beds on either side. 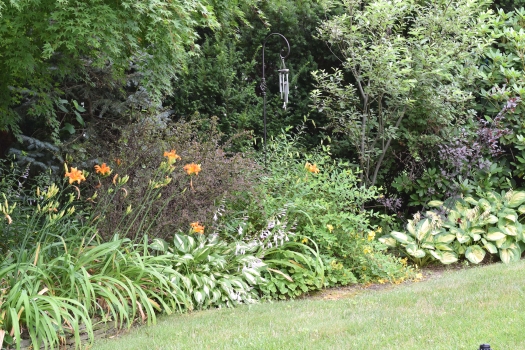 This is the section of the rear property line that contains the hypericum; it’s directly below the wind chime. To its left is Berberis atropurpurea and to its immediate right is the pussy willow that produced such giant catkins early in the year. A bit further down is a purple-leaved sandcherry and then a rhododendron which is probably ‘PJM’. The yew hedge running behind the entire rear property line belongs to the neighbor – thank goodness, because I would definitely not want the cost of keeping that monster’s height in bounds!