The old saying ‘you win some, you lose some’ certainly applies to this update of my 1930s mystery jewelry maker series. It includes four new colorways, two new design elements, and one huge source of frustration for yours truly. They are all necklaces, which I’ve grouped by length. 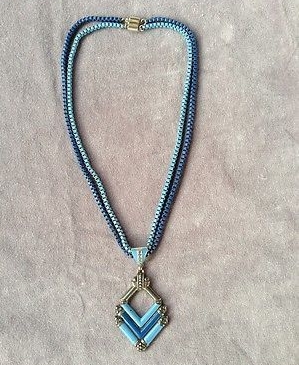 We’ll begin with The One That Got Away. It is the blue version of my mom’s red necklace seen at the beginning of Part One – the piece of jewelry that started this 5+ year (to date) research journey. I’ve loved my mom’s necklace since childhood but have always thought how absolutely perfect it would be if they’d also made it in my favorite color, blue. Well, they did and it’s as lovely as I imagined…..and I missed it!

You would think that after checking online venues on a daily basis for years I’d be sure to eventually find one if that colorway ever existed in this design which, based on my research, I had high hopes of. Lo and behold one finally appeared on eBay last September (2014.) Of course Murphy’s Law dictated that this would happen during several months when my internet access was severely limited. I won’t ruin my ladylike image by repeating here what I said when I accidentally found the listing, a full year after the fact, while researching something entirely different (alright, I confess: the words I said would probably have made a longshoreman blush.) It is a miniscule comfort to reflect that yes, I was right about them having made it in blue….. *sigh* 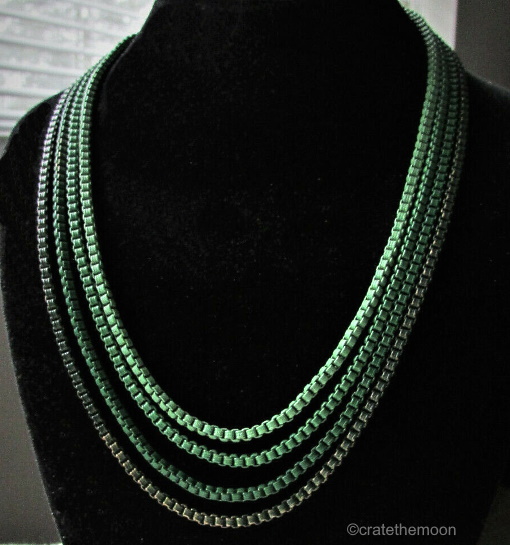 A sibling of sorts to the triple-snake-chains necklace seen in Is It Jakob Bengel? this quadruple box chain necklace is likewise in their “signature” shades of green. 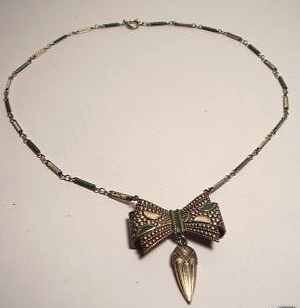 Here’s a green-and-cream/white version of the brown-and-cream bow/drop/lozenge chain necklace seen in Several New 1930s Mystery Maker Finds. It is 17” long, and both sides of the lozenges are painted.

In this necklace the same textured bow has been paired with three snake chains in the same shades of red used for my mom’s necklace. This necklace is 16”long and is the fifth colorway that I have found for this design (textured bow + triple snake chains). The other colorways thus far are: Brown/orange/yellow, seen in Part One with its matching bracelet; Black/yellow/white, seen in Part Three; “triple greens” seen as a necklace in The Mystery Jewelry Maker Returns, with its matching bracelet illustrated in Yet More Mystery Maker Jewelry; and a “triple blues” bracelet. Thus this “triple reds” is the fifth known colorway for this exact necklace. It’s reasonable to assume that every colorway in this design was produced as a necklace and matching bracelet, which means that Somewhere Out There is a triple-reds bracelet for this necklace. Whether they were originally sold separately or together as a set is yet another mystery!

Here is a far better-photographed alternate colorway of the blue-and-silvertone mesh necklace seen in The Mystery Maker Returns (illustration #11). In this example the metal is goldtone and the color is a creamy salmon pink. We can now assign a length to this necklace which is 16.25” long; the mesh chain is their ‘watchband’ style and the faux marcasite findings and stations are classic “Mystery Maker” elements.

Something a bit different in their plain flat mesh 15″ choker: a moveable center station! The “tails” are from their large bow typically seen with a drop and on their longer necklaces, but this time paired with a Greco-Roman(or Gaelic?) circular element. This example seems to combine two different metal colors: brass and silvertone.

However, this one is all brass. Many thanks to Etsy seller Alice Lily Co. for bringing this example to my attention; it somehow made its way “across The Pond” to England!

Here’s their ‘watchband’ choker again, paired with their versatile tailored bow. The brass version of this necklace can be seen in my very first Mystery Maker post, although with a box clasp rather than the thumb ring used here. See that tiny loop on the bow element? One would assume that there originally was a ‘drop’ of some sort (which has been seen on a few designs using this bow) which had gone missing over time… but the brass example also has that same tiny loop. What are the odds that both of these would be lacking the drop?? Hmm. On the other hand, if there wasn’t ever a drop, then why have the loop? Another mystery from the Mystery Jewelry Maker. 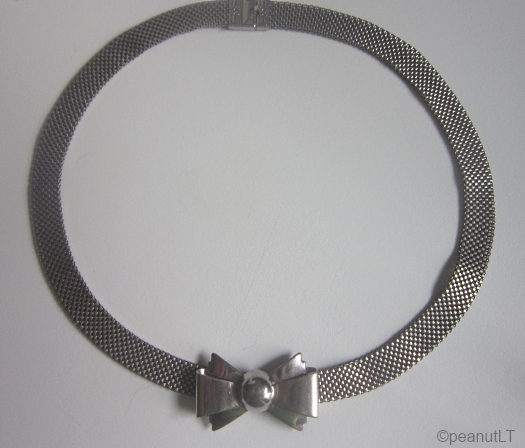 Here we have the same bow but as a “blank” and with a dome in the center. Compare this necklace with the one below which they produced as a souvenir piece for the 1934 Chicago Worlds Fair; that necklace has the ‘watchband’ flat mesh whereas this choker uses the plain one, the WF bow has a combination of polished and matte metal surfaces, and of course the Century of Progress logo in the middle. 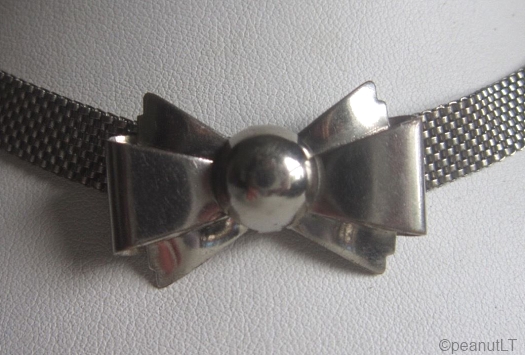 This maker may have cast (or at least stamped) most of their findings themselves rather than buying them as readymade wholesale pieces because we’ve seen so many different variations created from the single design – their chevron is one-half (side) of this same bow. By varying the stamping and the finish they produced quite a number of different looks!

This is the first time I’ve seen them use this ‘dome’ as a decorative element. By the way, the seller of this necklace gave the material as “chrome” and set a starting bid of $225 along with the magic phrase “Jakob Bengel style”. Just a bit over-enthusiastic on both counts! 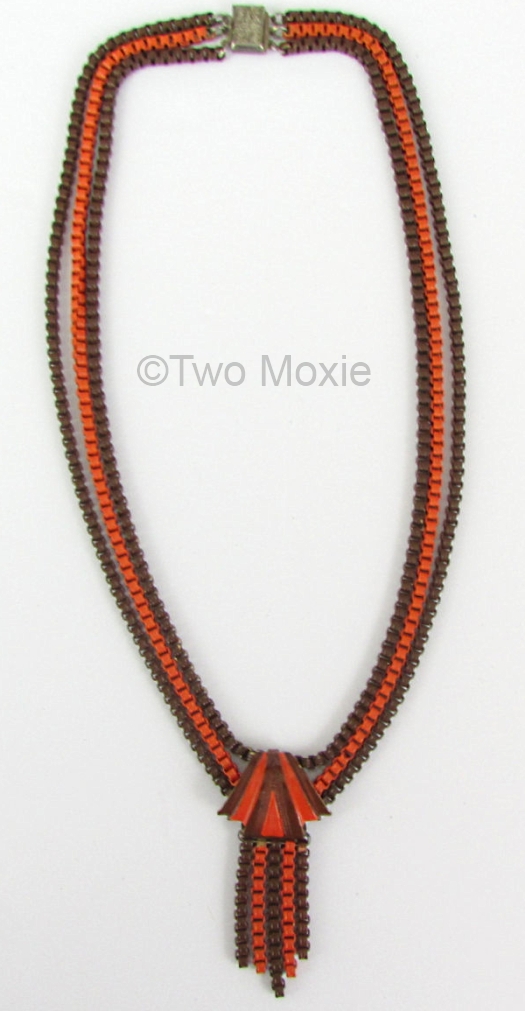 It’s always nice to find one of my favorite necklace styles in a new colorway. The colors are very similar to (possibly the same as) one of the examples seen in A New Mystery Maker Style. It is the usual length of 15” (not including the chevron’s fringe.) To me this colorway immediately suggests a box of chocolate-covered cherries! This particular necklace must have been very well cared for because there seems to be almost no wear to the enameling – quite a feat after 80 or so years. To paraphrase Yoda: “When eighty years old I reach, look as good I will not!”

Speaking of that New Mystery Maker Style review, here is an additional colorway for that design. This time it is in black and white, which I’m glad to see because there doesn’t seem to have been as many items in that colorway (or at least, not yet unearthed.) Like the others, it is slightly over 15″ long and is 5/8” wide. I was surprised at the brightness of the gold finish, so I inquired of the seller as to whether it really is that bright or whether it was perhaps a result of the photo lighting; she responded that yes it really does look like that. Having sold several of this maker’s pieces previously, she too noticed that it was brighter than their ‘usual’. Perhaps someday a black/white version in their silvertone finish – which they did use for this style, as I’ve found one in green/white – will appear as well.

And the Mystery Maker research hunt goes on! If you have any information about this jewelry or photographs of examples that do not yet appear in this blog series, I would be delighted to include them in a future post. Please use the Contact Form on the About the Chatsworth Lady page.

← The Great Dogwood Mystery, Solved
A Glossary for Orchidists →