During the several years of research into my mysterious 1930s jewelry maker’s wares, I’ve puzzled over the apparent lack of one popular Art Deco style: flat mesh chokers and bracelets decorated in a geometric pattern (typically of triangles, zigzags or diagonal lines.) In fact, I have a file containing numerous such images but thus far none of them have been firmly connected to my Mystery Jewelry Maker.

The bracelet above is the first example I have found of the MJM having produced a truly “patterned” mesh item. This is their fine-mesh chain which, the seller mentions in her listing, has a tiny bit of “stretch” to it which their other flat chains do not.

The bracelet has a second surprise which is this newly discovered stamping of their tailored bow. In this version it has the effect of narrow strips of ribbon and also has ‘cutouts’ which is also something new. It is 6 ¾” long and the mesh is 3/8” wide which was their standard width for all of their flat-chain bracelets; it is extremely likely that a matching necklace was also produced.

It has the same clasp that the MJM typically used for virtually all of their flat chain (flat mesh, ‘watchband’ style, and fine mesh) necklaces and bracelets. It is also seen on the watchband-style choker below which, by the way, I do not consider “patterned” because it is simply alternating green and white accents just as they did on a number of their other chains.

This particular clasp may become a key to determining whether or not an entire range of other patterned mesh necklaces were or were not produced by the MJM. It is true that I have never yet found a flat mesh necklace definitely made by them that did not also have this exact same clasp. Later this month I will publish a new post showing patterned-mesh necklaces that have an extremely similar – but not precisely the same – clasp as this.

The second exciting discovery about the MJM’s designs is that they occasionally added a glass stone decoration. Until the appearance of the two necklaces below, I had never seen them using any decorative element other than enamel paint on any of their original (meaning not subsequently altered) pieces. However, I recently found two examples that torpedoed my assumption that they never used glass stones. 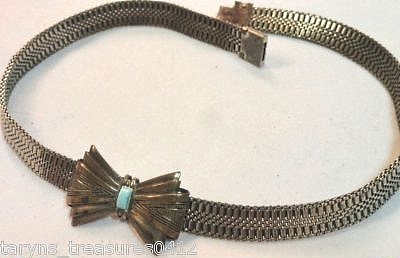 This is unquestionably a MJM necklace: their chain, their bow, and their clasp… but the new element is the faux-turquoise glass baguette added to the center of the bow! The recess in which the stone sits is further evidence that the MJM may well have done their own casting; the ‘normal’ tailored bow has no such recess. 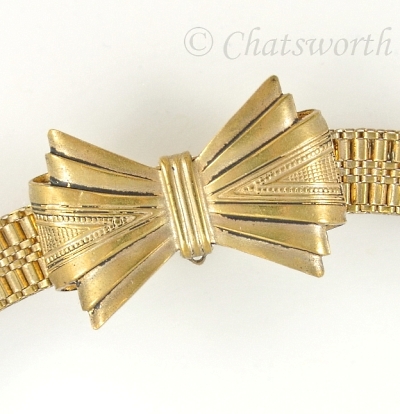 Here is the same bow stamping on the goldtone version, showing its typical central “tie” which appears very similar to the one used on the ‘new’ necklace. It’s very unfortunate that there’s only the one photo of the new example! Zooming was of minimal help, due to pixelation, but it looks as if the glass stone itself is almost as wide as the vertical center section. This presents only two possibilities; either (a) the stone was simply stuck atop the bow with glue by a later owner (hardly likely with the design shown above) or (b) this was a bow stamping made specifically to accommodate that faux stone in that spot. My educated guess is that it’s (b).

But one swallow does not make a summer, as the saying goes, which is why I had set this photo aside and waited to see if any other glass-stone-decorated MJM examples would ever show up.

Et voilá! The center station, a new-to-me design, in some ways reminds me of the bracelet-turned-necklace shown in The Mystery Jewelry Maker Returns. I also couldn’t help noticing the repetition of the exact same ribbed motif in the clasp and the center station which, lo and behold! also contains a ribbed glass stone which is unquestionably original to the necklace. The length is 15” and width is 5/8”; the center station measures 1 3/8” x 1 1/4” and the finish is silvertone over brass… again typical of their work.

Obviously the Mystery Jewelry Maker did sometimes use a glass stone as a decorative accent. I still do think, though, that the vast majority of their designs were either painted enamel on metal, or metal with no added decoration at all. It will be very interesting to see if other stone-accented designs eventually come to light!
Addendum: See not one but two “Sumerian” style pendants with glass stone accents in the Spring 2017 Update.

The next example leads the way to yet another link in the “great mystery maker mystery”. 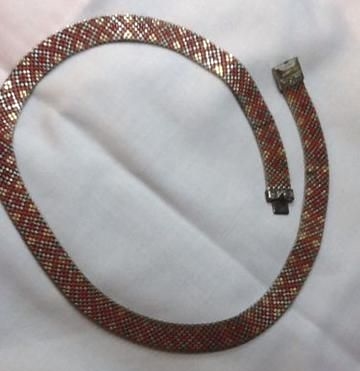 The 15” long choker above, patterned in red over silvertone, is from a 2013 eBay listing with only these three photos. It was advertised by the seller as being “probably 100 years old” and with a “red Art Deco design enameled on it. There are no markings but it tests sterling.” Close examination of the photos show that it definitely has the Mystery Jewelry Maker’s clasp. The patterning dovetails very nicely with the necklaces shown in my next post.

As far as the seller’s assertion that this necklace (as well as several examples of the MJM’s large-bow necklace offered for sale online in the past) “tests [as] sterling”, it’s important to know that there are two widely used methods for determining whether a piece of jewelry is real silver or simply a silver(ed) base metal but only one of those methods is accurate.

The correct way to test for sterling is with a chemical kit; it is cheap, quick, and reliable once you learn how to do it. Silver test solutions are usually included in kits that also test for 10K, 14K and 18K gold.

Unfortunately, what many people use instead – especially when browsing tag sales etc. looking for “finds” to buy or to resell and/or don’t want to risk damaging any part of the piece – is the magnet method. It is true that silver is so very weakly magnetic (it’s diamagnetic, actually) that it’s considered to be non-magnetic. There are two problems with the magnet test. Problem #1 is that any old magnet won’t do; you need one of the very strong neodymium rare-earth magnets. Problem #2 is that there are a number of silvery metals that also do not stick to a magnet, such as 18/8 and 18/10 stainless steel, plated copper, plated brass, aluminum and zinc. Electroplated brass, which is what the majority of “silvertone” vintage costume jewelry was, will not stick to a magnet… just as a real silver piece would not. (Nickel is highly magnetic, which is why nickel plated brass sticks to a magnet.

We can probably quite safely dismiss the claim that the red patterned necklace above was sterling (as well as claims by a few other eBay sellers that their example of the MJM’s silvertone large-bow necklace was “unmarked sterling”). The question is, does it have any “relatives” and if so… how many? The first of the two Patterned Enamel Necklaces posts begins to answer that question.

2 comments for “A Trio of New Mystery Jewelry Maker Discoveries”