For some time now I’ve been wondering if a particular range of 1930s patterned mesh necklaces were made by my mysterious Art Deco designer. However, when trying to positively identify unsigned vintage costume jewelry, hunches aren’t enough; multiple pieces of evidence are required.

One thing that jewelry researchers always look at is the clasp. Without having access to any 1930s wholesale jewelry findings catalogs it’s impossible to know whether a given clasp was available trade-wide or was proprietary to only one company. Some of the necklaces below have a box clasp that is not the exact same one that my MJM (Mystery Jewelry Maker) used on the many examples I’d previously found  – which is one reason why I originally hesitated to attribute this patterned mesh jewelry to them.

All of the first eleven necklaces shown below use the exact same flat mesh chain, which is an exact match for one of the three that were used by my MJM although – like the clasp – this is not by itself a positive identifier. All of these are between 15” and 16” in length and (with only one exception) the mesh is 5/8” wide. Some have enamel paint on both sides while others are decorated only on the top.

This sweet pink-and-blue-on-white 15” choker is extremely feminine despite the geometric zigzag design. The reverse side is solid white, and the box clasp has a “ribbed” center section.

Here is the same necklace but giving an entirely different effect in two shades of green. It is 16” long, is solid green on the reverse, and has the same ribbed-center box clasp. 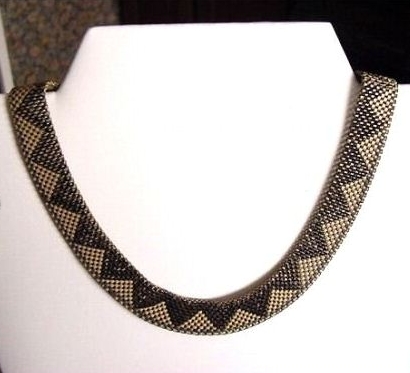 Here’s an adaptation of the same zigzag motif with one side being filled with color to form triangles. This time only black is used, to fill in the top triangles and to create a two-row black (or perhaps dark grey?) outside border. The reverse is plain metal; the length is 15” and the ribbed-center box clasp appears to have originally had black trim, now partly worn away. (The MJM did occasionally accent the clasp to match the necklace.)

Another example of the contrasting-triangles motif, this time using medium green and cream. Although difficult to see in this photo, the outer edges were left as the brass metal surface. The reverse is plain metal. Like the previous necklace it is 15 ½” long but the seller cited it as being 3/8” wide which would account for the slight difference in the shape of the triangles. No photo of the clasp but the seller stated that its spring-ring clasp was not definitely not original to the necklace and so it probably did once have a typical box clasp as seen in the other examples.

This unfortunately small photograph shows a matching necklace and bracelet in two shades of pink in the same pattern as the first two zigzag motifs above. The necklace is 15 ½” long and the bracelet is 7”; they are both the same 5/8” width. As per the seller decription, they are “made of a brass colored metal with a silver[tone] plated finish…..front and backs are enamel painted…..The plating is tarnished and also missing in some spots where the base metal shows through.” Following the format of the other necklaces in this design, the back must be solid pink. An eye-blurring zoom confirms that the box clasp is the ribbed-center type, just as in the first and second examples. 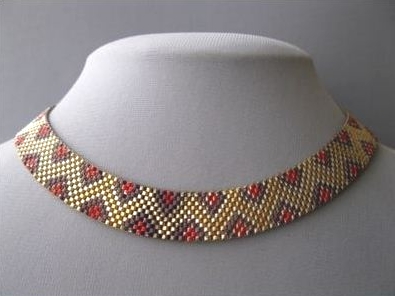 Here is a slightly different triangle pattern – almost a snakeskin effect – in red and dark brown accenting the brass metal. This design has no outer border. Those colors do exactly match three confirmed Mystery Jewelry Maker pieces. The necklace length was not provided, nor any photo other than this one. Clasp was not pictured nor described.

Back to three colors again, with medium green, golden yellow, and white. This one is 16” long. The reverse is solid white. Although there is only this one photo, the description cites “closes securely with its original push box clasp”.

Simple diagonal lines can be quite effective, too. This 15” choker sports salmon-pink lines flanked by white ones; again this is a color combo found in two verified MJM items. The other areas are the goldtone/brass metal mesh of the necklace. Only the top of the necklace is decorated. No photo of the clasp but description says, as the previous, “original push box clasp.”

Here’s an unusual “night and day” design, again using black over the silvertone metal. This one was described as being 14 ½” long.  This necklace shown above was sold on eBay in 2010; a different example, in chocolate brown and school-bus yellow, was cited as being 16” long, so perhap one of those listings was a typo.  Both examples have the same clasp.

The following two necklaces depart from the zigzag/triangle motif entirely, and both have/had a decorative element in the center.

This necklace intrigues me on several levels. Not only do I find the pale sage green and white colorway attractive, but the interesting center station echoes the ribbed design of the box clasp. This isn’t the first time I’ve seen this design matchup; the silvertone/green-glass-insert choker seen near the end of the Trio of New Discoveries post does the same. My MJM did have a penchant for coordinating their clasp with either the chain or the central element that they used (though not every single time). This necklace is 15” long, and the center motif is 1” high. The reverse side is plain. 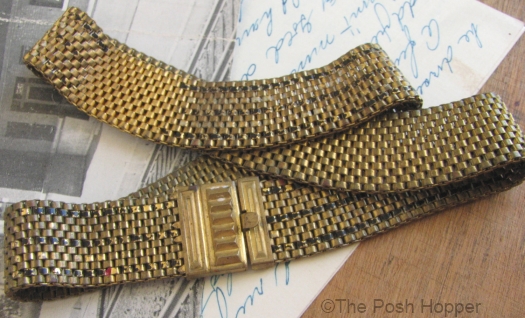 This necklace once had a center station, as evidenced by the second photo. It too is 15” and 5/8” wide, and I strongly suspect that it is an alternate colorway of the green necklace above. The three rows of black occur in the same locations as that necklace, and I’ve confirmed with the seller that there are faint traces of two rows of white in the same locations also. The ‘blank’ area in the center is about 7/8” wide and slightly oval in shape; if you look at the detail photo of the green medallion it can be seen that the painted lines stop in exactly the same pattern (painting was done after the necklace was assembled.) So if this necklace didn’t have the exact same medallion as the green one, it definitely had another (undiscovered) one of very similar shape.

If there’s one thing that has been consistent through my several years of research, it’s this: whoever the Mystery Jewelry Maker was, they were addicted to using certain clasps and it’s possible that at least one of those clasps may have actually been produced by them. We do know that they either cast or commissioned several of their jewelry elements such as their smaller bow, for instance, because of the numerous variations – none of which have ever been found on items other than theirs.

This is the clasp that appears on the patterned mesh items shown above.

This is the clasp that the MJM regularly used on their “watchband style” flat mesh chain, and as seen in this closeup, its design cleverly continues the construction motif of that particular chain. They used this clasp on many of their non-watchband style flat chains as well, but one thing has been consistent: This is the only box clasp that I have found on any of their flat chain designs. This same box clasp is found on the red-patterned necklace shown at the end of the Trio of New Mystery Maker Discoveries post. It is also found on both colorways of the necklace below.

This red-on-silvertone geometric lozenge pattern necklace is 15” long; there was no photo or mention of the reverse side. The photo was too small to positively determine exactly what kind of flat mesh chain this is; however…..

Here is the green colorway of the same necklace. It is the same size as the red colorway (15” long and 5/8” wide). Happily the seller’s photos do show the chain very well, which turns out to be the Mystery Jewelry Maker’s “fine flat mesh” (chain comparison photos appear in the Index) as well as the clasp, and I confirmed with her that the reverse side is plain. This supports the theory that the only designs with a painted reverse were the ones where the background is a color rather than the brass or silvertone surface. For those items the chain may have first been ‘dipped’ or spray-painted and then the design was applied by hand over that layer.

Where Are These in the Mystery Jewelry Maker’s Timeline?

Because we don’t know the specific retail years of any of the Mystery Maker pieces other than the 1934 Chicago World’s Fair items (and my mom’s necklace which was purchased between 1934 and 1936) it’s impossible to create a timeline of their ‘style evolution.’ Clearly they produced many designs over a yet-unknown span of seasons. Could these patterned mesh necklaces have been part of their earliest output as a newcomer to the market? Very possibly. It’s also possible (though remote, given the apparent exclusivity of these two box clasp designs to the MJM) that these patterned necklaces could have been made by another company entirely, and the matching paint colors/combinations were simply a coincidence spurred by that year’s color trends.

And just to thicken the plot even more, there exists a small sub-genre of these patterned mesh necklaces as well. They are easily identifiable as absolutely all being from the same design source and they also offer two brand new clues to the mystery. Those necklaces make their debut in my next post.