A small sub-group of the Art Deco era enamel mesh necklaces seen in Part One all have a fascinating attribute in common: each has one of three unique front hidden clasps. They also provide new clues to the identity of my 1930s Mystery Jewelry Maker. Here are the three front closure designs discovered thus far, to which I’ve given my own nicknames as per style. 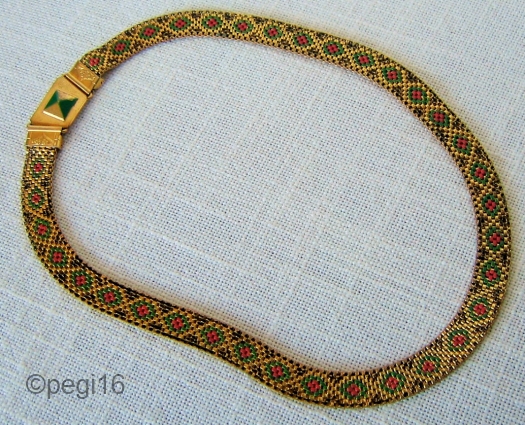 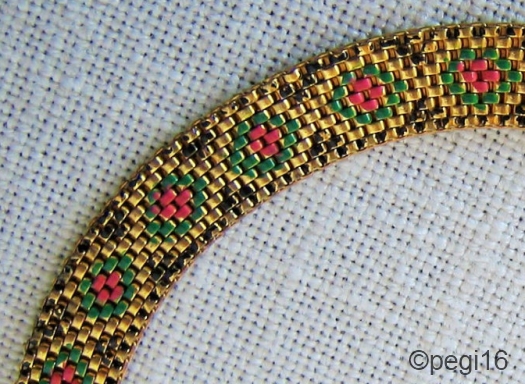 This intricate pattern is hand painted in red, green and black enamel on the 3/8” wide brass flat mesh. It is 15” long including the front closure. The necklace itself – like the others, including all of the verified MJM (Mystery Jewelry Maker) pieces – is unsigned but for the first time there is a mark! On both of the clasp’s side pieces that attach directly to the mesh chain there appears Pat.Pend. (Patent Pending)

I asked the seller of this necklace if she would please describe the clasp’s workings because I was curious as to whether it has a moving part or some type of locking mechanism. She replied that there is no safety lock/catch but that “One side of the necklace has a rectangular-shaped ring where the other side, with a rectangular curled hook, will attach. The weight and suspension of the necklace keeps it from detaching. (If you have ski boots, it is somewhat like those closures without the locking feature.)” Many thanks, Peggy, and also for the excellent follow-up photograph of the back of the clasp.

Here is another necklace using the same clasp, with an “arrow” pattern in dark grey and showing traces of dark chocolate brown paint as well.  This appears to be the same grey as seen on the third necklace in Part One, and dark brown is certainly no stranger to several of my MJM’s designs. Nice how the pattern on the clasp attachment continues the arrow motif! This necklace is 15 ½” long and 3/8” wide. Its description did not mention a mark on the clasp but that may have been an omission on the part of the seller. 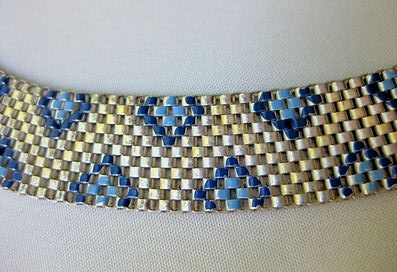 Here we have an unmistakable match: this ‘snakeskin’ pattern is a light/dark blue alternate colorway of the sixth (red and dark brown) necklace shown in Part One. The description of that necklace did not mention its clasp but it was photographed in such a way that it must have been just the typical rear closure. So it’s clear that the same manufacturer produced both versions (rear box clasp, plus decorative front hidden clasp) of this necklaces. Dare I point out that these exact two shades of blue are also found on numerous known MJM items?

This necklace is 16” long and 5/8” wide; that width is interesting and not only because it matches most of the necklaces in Part One as well as the majority of confirmed MJM necklaces. The seller of this necklace did not mention a Pat.Pend mark but commented “The central motif with a raised “rivet” connects the two ends invisibly.” The areas in the second and third photos that appear to be yellowish are probably where the silvertone plating has worn away from the brass metal beneath.

This pattern is very prettily done in blue, red and black. It is 16” long. The seller did not mention the width but did say that the clasp ends are marked Pat.Pend. Notice that the stamping (design) on these side pieces is different from that seen on the ‘Deco Pyramid’ style closure.

Here’s a multicolor pattern that at first glance looks the same as the one in the first (red/green/black) example but is a bit different in the shapes of the lozenges. This slight alteration is probably because the chain is a different width; this chain is 5/8” wide, while the Deco Pyramid clasp necklaces are 3/8” wide. This necklace is 15 ½” long; there was no mention of any mark on the clasp but we can assume the Pat.Pend was there.

Here is a necklace that clearly once had the Rococo Pyramid clasp because the design on the side connectors matches the previous six examples; the original 1930s front has been replaced by a modern foldover and relegated to the rear – no problem with these exceptionally comfortable and flexible mesh necklaces. The pattern is an alternate (green and black) colorway of the black-on-silver third necklace in Part One whose ribbed-center box clasp is also shown. So we have yet another proof that the same company made all of these necklaces, regardless of clasp type. The dimensions of this necklace were not given but because of the side pieces we know it must have been 5/8” wide. 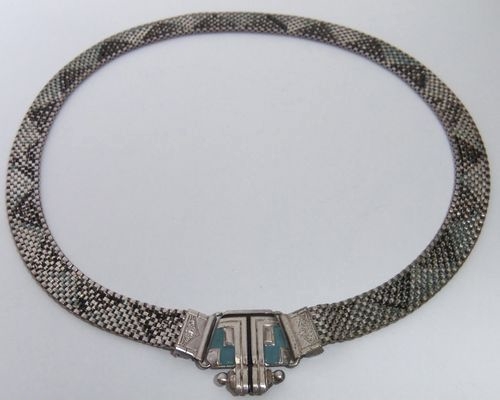 Doesn’t this third clasp design just scream “1930s Machine Age”? The flat mesh chain is the 3/8” wide version but the pattern follows the one seen in the replaced-clasp necklace above. This time the triangle colors are black and turquoise (oh so deco!!) instead of black and green. This necklace was obviously much worn and loved but traces of turquoise on the mesh do remain. Notice that the clasp side stamping is the same as they paired with the Deco Pyramid front. The necklace is 15 ¾” long and the central motif is about ¾” high. The seller did not mention the clasp sides having a mark but because they are the same as the ones used on the Deco Pyramid front, the Pat.Pend was surely there. 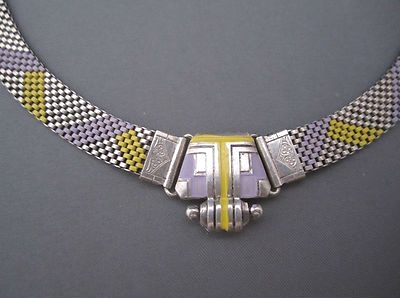 And finally we have the “smoking gun” that connects all of these patterned mesh necklaces and bracelets definitively to the Mystery Jewelry Maker. And it’s not merely because this matched set has the exact same pattern as the Part One necklace, shown again below, in a different colorway. 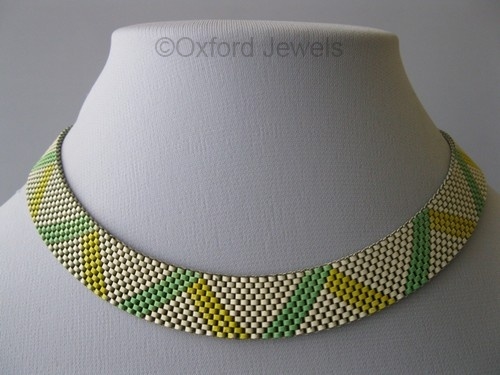 The seller’s description of the green-and-yellow necklace said “closes securely with its original push box clasp.” Here we have the same necklace in the same pattern but in lavender and yellow, and with the Machine Age Motif proprietary front closure. The set has a white “background” just as does the green/yellow rear-box-clasp version. So now third time’s the charm: Same manufacturer undoubtedly made all of these patterned mesh pieces.

The description of the necklace/bracelet set cites the necklace as being about 15 ¾” long and the bracelet as 7”, and both being 3/8” wide mesh. It’s the bracelet that provides the final proof, because it has the Mystery Maker’s smooth-centered watchband-style box clasp. This is a clasp that I have never found on any other Deco era manufacturer’s necklaces or bracelets at any time during my several years of continuous research. There are now enough shared design elements — clasps, identical chains, and enamel paint colors/pairings —  to show that these patterned mesh pieces were indeed also produced by them. The ‘red herring’ of the other (ribbed-center) box clasp seems to have been exactly that, and it is also true that I’ve never found the ribbed box clasp on any items that were positively not made by the MJM; they have only been found on the Part One items plus the second necklace in this post.

And so all of these patterned mesh necklaces and bracelets can now be confidently added to the roster of the Mystery Jewelry Maker’s designs.

UPDATE: Additional examples of these necklaces (and bracelets!) can be found in the third and fourth posts about these designs. The fourth post also shows that an online seller has erroneously attributed them to the noted German maker Jakob Bengel. These were definitely not made by him.

About that ‘Patent Pending’….

I was so excited when I saw the Pat.Pend mark on these pieces now found to be from the Mystery Maker – all I’d need to do, in order to finally find out who they were, would be to locate the patent applications! Of course that would be much easier if any of the clasps had a patent number, but hey: they did file patent applications, and I know what the clasps look like, right? I’d only need to figure out whether it would have been filed as a Utility Patent or as a Design Patent and then look into the archived application records…

Well, that hope was shot down when I discovered that the US Patent Office only began publishing patent applications starting in the year 2000 ….which is a good seventy years too late for my purposes. Just because someone applies for a patent doesn’t mean it will be approved (assigned a patent number), nor does it mean that the patent application wasn’t abandoned; it may have been approved eventually but if the company was no longer in business by that time, the final fees wouldn’t have been paid and a patent number never issued. [*cue the off-the-cliff/smashing-on-rocks sound effect here*]

Thus Pat.Pend represents a dead end. As for searching for the actual patents visually, well… there were 485,236 patents issued between 1930 and 1940. The likelihood of me searching through almost a half million archived illustrations, on the chance that the MJM may have been granted these patents, is about the same as finding the Lost Tomb of the Pharaoh Akhenaten beneath one of the buddleias in my backyard.

However, if any blog reader happens to come across one of these clasps bearing a patent number instead of Pat.Pend, to say that you would have my eternal and undying gratitude would be an understatement! (Please use the Contact Form on the About the Chatsworth Lady page in the event of such a miracle.)

If you have any information about this jewelry or photographs of examples (designs, enamel mesh patterns, or additional front clasp motics) that do not yet appear in this blog series, I would be delighted to include them in a future post! Please use the Contact Form on the About the Chatsworth Lady page.