Never let it be said that my mysterious 1930s jewelry maker allows me to get bored! Here are four more of their patterned-mesh designs using the unique front clasp – including a newfound style.

This is a black-on-silvertone colorway of what appears to be the same pattern as the multicolor-on-goldtone necklace shown as the fourth example in Patterned Mesh Necklaces Part Two. The front clasp (the “Rococo Square Pyramid”) is the same, and the flat chain is likewise 5/8” wide. The necklace is 16” long.

That same Part Two post also shows an alternate colorway (black and dark green) of this necklace; that one had a replacement clasp, but this one is all original – and a newly discovered clasp design to boot! This is a great research find not only for that reason but because it is clearly a ‘design match’ for one of the box clasps seen on other Mystery Maker pieces. The photo above shows the necklace in reverse orientation rather than with the clasp in front. Also, although in the photo it appears as if the width of the chain tapers toward the clasp, it does not; there are 11 rows of mesh link throughout, and it is 5/8” wide. 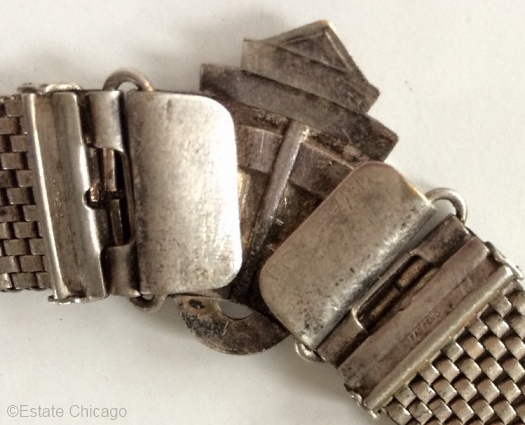 This clasp is fascinating because although in the main photo it looks as if it separates in the center, that’s merely an illusion. As shown in the reverse-side photo, and just like their other designs, one side of the clasp is attached to one sidepiece while the other side of it hooks onto the opposite ‘loop’. I’m going to call this fifth clasp their “Ribbed Architectural” motif. Notice how the ribbed portion exactly matches the casting of the box clasp below which is found on other Mystery Maker necklaces and bracelets. These findings clearly all came from the same manufacturer. 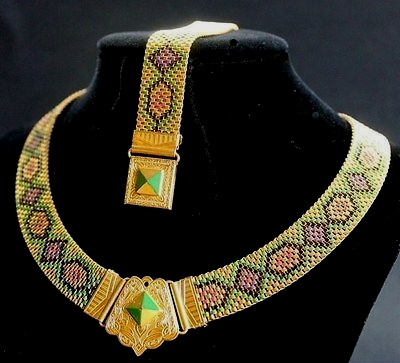 An eye-popping set in their vibrant multicolor lozenge-and-diamond pattern. An identical necklace appears as the sixth example in Part Two but here it’s accompanied by its matching bracelet. It seems they often used this square shaped clasp when they chose to pair a bracelet with one of these necklaces; Part Three shows the same clasp on a differently-patterned bracelet. The necklace is 16” long and the seller mentioned that the clasp ends are marked Pat.Pend … as expected! 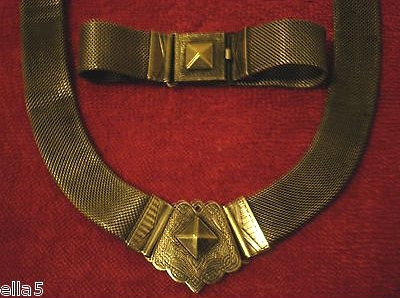 Here’s another necklace/bracelet set but with two big surprises. The obvious one is that unlike all of the others seen so far with these unique clasps, this set is not patterned at all! However, because of the clasps I’ve included them here. No details with supplied with the photo but the bracelet clasp is the Floral Square Pyramid and the necklace has the Rococo Square Pyramid one. There is no evidence of any traces of enamel paint anywhere in the photo. The second surprise is the mesh chain itself because it appears, from my best examination of the image, that this is not the same flat link mesh chain that is seen on every one of the patterned examples with these particular clasps discovered thus far. Instead it appears to be their third mesh chain type which is the “fine flat mesh chain”, which is also seen in the final two examples of Patterned Mesh Necklaces Part One (the red and green colorways) as well as the bracelet shown first in A Trio of New Mystery Maker Discoveries. Those other examples used one of their two standard box clasps, but here they have used the same chain for this ornate clasp set. My guesstimate for the dimensions is that they are probably both 5/8” wide – because of the clasp ends used – and that the bracelet is between 7”–7.25” long. The necklace could be anywhere from 15” to 16” long.

ADDENDUM:
A sharp-eyed reader has made me aware of a gross misidentification of these necklaces as supposedly being by Jakob Bengel.

The necklace above is currently being offered by the seller with the following description: “Chrome mesh collar necklace, made by Jakob Bengel in the late 1920’s. With typical Bengel chatelain type panel to the centre. Does up behind the panel. It measures 16 inches from end to end” at a price of £265. What completely gobsmacks me is the fact that there is NO MENTION whatsoever of the Pat.Pend. mark on both of the side pieces, which my four blog posts (to date) on these necklaces have shown! Riight… Jakob Bengel created these front closures in Germany during the Great Depression but applied only for an American patent for them? When none of his verified jewelry was signed or marked in any way whatsoever? Hardly likely. Sadly this is not the first time that the Art Deco Emporium has caused confusion in the online marketplace by misattributing a Mystery Maker item; see my Is It Jakob Bengel? post for the debunking.

I have no idea why the Art Deco Emporium does not cite the marks on the clasp, which are mentioned — and often photographed, as above — by virtually every other online seller of these particular necklaces and bracelets. I should also mention that the necklace is not listed within the Emporium’s “Jakob Bengel” section but is instead within the “Period and Vintage Necklaces” section. That section states that the items therein are “most made in the 1930s, or from parts manufactured in the 1930s.” Therefore the title and description of this necklace seem to contradict its placement on that site, or vice versa. I also discovered that in the almost 700 examples of Bengel jewelry offered there, not one other piece shows a center clasp of this type; nor have I found any other reference to Bengel having used such a clasp — making the adjective “typical” even more puzzling. 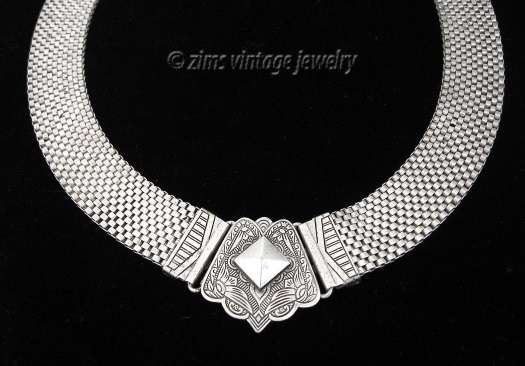 Here is another example of the same all-silvertone necklace but unlike the one at Sheryl’s the finish on the clasp and on the mesh is identical. This necklace has obviously been cleaned (normal oxidation removed) prior to being offered for sale.

The next “Mystery Jewelry Maker” post will contain several brand-new discoveries within their other design genres.