Continuing last week’s before/after tour of my 2003–2014 garden, the next three planting beds were all in the backyard as well.

The back of the house faced south although structurally it was not a continuous straight line. The most immediate planting problem was at the west end.

Something absolutely had to be done to screen those large mechanicals, and my first choice was a row of tough-as-nails euonymus. (The pair of posts supported a small deck outside a second floor bedroom.)

After Plan A didn’t work out all that well (don’t ask) the above became Plan B. The bed in front of the trellis went through several different iterations including a veggie garden one year (don’t ask about that either) but this 2009 version worked best. The flowering vine changed each year; here it was a pink mandevillea. The front row is the non-flowering Stachys ‘Silver Carpet’ with a row of bearded iris behind, in colors arranged for a rainbow effect but naturally they never all bloomed at the same time! As for the trees, the silver was Eleagnus ‘Quicksilver’ and the others were ‘Bad Mistakes’. The mistake was letting someone else obtain them. Because I needed a decent size ASAP; I told the lawn maintenance guy in 2006 that I wanted two almost-mature dwarf Lawson cypress that would not reach more than 6 ft tall… soemthing like ‘Blue Surprise’ which nobody was selling at that time. He assured me that what he obtained from the wholesale nursery would “absolutely not” grow taller than 8 ft .. okay, I could live with that. By 2011 they were 12 ft tall and showing no signs of stopping. Hurricane Sandy sent one of them into a rapid decline and by the time the house was sold in 2014 it was completely brown and dead; the other was halfway there. Moral of the story: always buy the plants yourself! 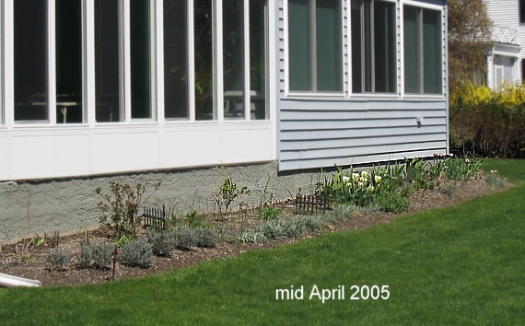 The opposite end had an enclosed patio and a sitting room. The windows and exterior materials on these separate rooms were different, so it seemed like a good idea to divide the adjacent planting area into a Fragrance Border and a Cutting Border at the same point. This is how it looked in 2005; lavender and dianthus in front, the rugosa hybrid rose ‘Earth Song’ to the left of that first small divider and Lonicera fragrantissima to the right, plus Oriental lilies and tall phlox. Next year a mock orange (Philadelphus ‘Bouquet Blanc’) was added to the left of the rose.

For the first few years this end was populated entirely by tulips, lilies, iris and various annuals. Unfortunately I kept cutting the Cutting Garden flowers (tulips, bearded iris, Asiatic lilies, and annuals) so often that I rarely stopped to photograph them!

The mock orange and rose in summer 2011; that green hulk just past the rose is the winter honeysuckle. The lavender had been removed (don’t-ask #3.)

The biggest project in the backyard was the central planting, which began in spring 2005 as a roughly kidney-shaped island bed. The sapling in the middle is a katsura, Cercidiphyllum japonicum ‘Strawberry’. There’s a small buddleia ‘Ellen’s Blue’ in the western end, as well as various bearded iris. 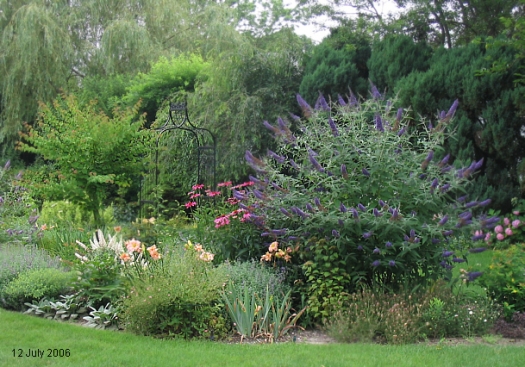 Here’s the west end of the same bed in July of the following year. The buddleia took off the like proverbial rocket! There’s also a very dwarf white buddleia; perennials include daylily ‘Catherine Woodbery’, Echinacea ‘Magnus’, lambs ears, baptisia, peonies and potentilla.

The next year I decided to connect the island bed to the outer “pathway” border, and dug out the intervening space. This is a view from the second floor; the larger of the two leafless shrubs is the buddleia Ellen’s Blue.

Here’s the same overhead view a bit later. White ‘Immortality’ iris to the left, and a row of white ‘Irish Cream’ evergreen azaleas to the right; the larger bronze-foliage shrub in the pathway border is the crape myrtle and the smaller one is Physocarpus ‘Summer Wine’. (yes I do document everything I ever plant! 🙂 )

A ground-level view of the original island-bed area, taken the following summer (2008.)

And back to the overhead in August, with the crape myrtle now in flower and the ninebark burgeoning. The bed at the lower right is the one at the entrance to the backyard from the driveway (seen in Part One.) 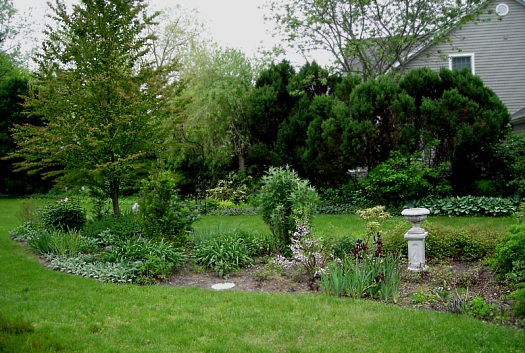 This was taken in spring 2011. How the katsura has grown in six years!! The leaves really do smell of caramel in the fall, by the way; it’s not a knock-you-over fragrance but it’s there. I had to significantly cut back the buddleia twice each year because otherwise it would have swamped everything. The small pale lilac shrub was Daphne genkwa ‘Hackenberry’ near a group of very early border-bearded iris ‘Cranapple’ in maroon-red.

This is a brief lesson on What Not To Do With a Driveway (other than installing white pavers.) I wanted a non-fence separation from the neighbor’s driveway and so I planted five Miscanthus that spring and plopped a few chrysanthemum ‘Ryan’s Pink’ and Coreopsis ‘Moonbeam’ between them. And just for good measure I added a few burgundy foliage cannas. Why not? 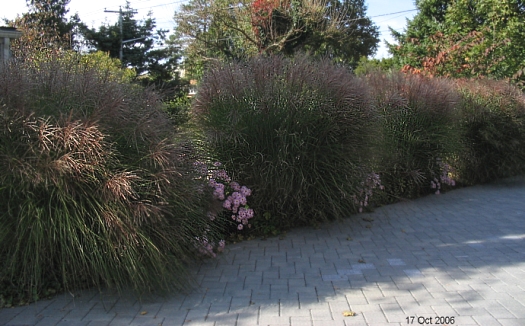 This is why not. Within twelve months the coreopsis had been smothered to death and the mums were barely holding their own against the grasses which looked as if they were about to cross the Rubicon (driveway) and invade the house. I nearly killed myself trying to cut those monsters back!

The following year I paid the lawn guy a ridiculous amount of money to completely remove the incredible-hulk grasses and replace them with three neat and tidy Juniper ‘Skyrocket’. Now it was the mums’ turn to claim territory, along with the ivy invading from the neighboring property. This was taken in September 2009 which was the last year that I was able to do any meaningful work on the garden. 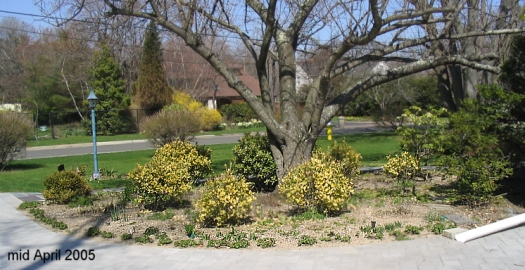 Speaking of the driveway, this was the section near the garage where the front walkway joined it. The big ‘Kwanzan’ cherry came with the house, as did the variegated euonymus which I promptly hacked back, ummm, “judiciously shaped” and added a row of Geranium ‘Biokova’ along the front edge along with a few other perennials wherever I could manage to tuck them among the cherry’s roots. 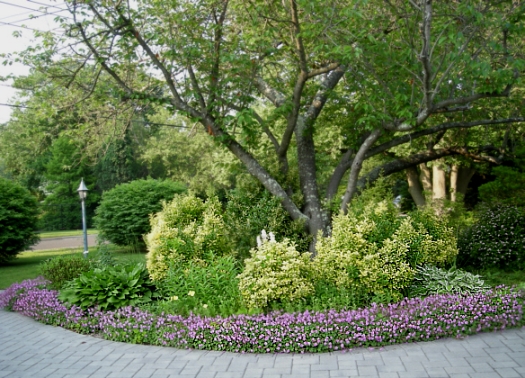 A few odds and ends

There were a few other areas that I either didn’t photograph often, or have only boring photos of…. such as the tree-shaded north-facing bed under the living room window within which not even hostas and ferns did well; the east house wall which looked okay when the three lilacs (blue, pink, and white) were in bloom but, other than the Chocolate Garden section, was pretty much a snoozefest the rest of the year; and the existing front foundation plantings, of which I only took individual-plant photos. However, there are a few final shots to share.

Daffodils under the linden trees during my third spring there. I bought the house from the original owner and have no idea how long ago the narcissus were planted but they were a mix of large-cups in solid yellow, solid white, and white/yellow cup. They came up and increased every year even though I never even fed them!

A view of the northeast side property line, taken from a second story window. This was another tangle of brush and trees belonging to the neighbor, with a wisteria amidst it that I had no chance of ever eliminating. So I planted a “thug” of my own choosing – one small, innocent-looking Clematis terniflora – gave it a good long drink, patted it on its little head and said “Go, do your thing, have fun.” And so it did… and because of the orientation, the avalanche of white September flowers faced my house instead of theirs. 🙂  This photo was taken toward the end of the bloom period! To give an idea of scale, the row of sea oats (Chasmanthium latifolium) along the lower left is about 2 ½ ft tall. When the neighbor’s house was sold in 2010 and the new owners stripped most of the property and installed aluminum fencing, the clematis also got ripped out. (They thought they’d gotten rid of the wisteria too. Nope.)

This is the only part of the front yard, other than the driveway and the flowering-cherry corner, that got decent sun, because it was next to the street. The four Euonymus alata came with the house and this is how they looked in autumn. The color intensity varied exactly as is shown here — from scarlet to mahogany — because the two at the far end were shaded by the lindens (whose branches reached all the way through the utility lines along the street) while the other two were not.

This is the one and only flower that was ever produced, after six years of coddling and cajoling, by my young Franklinia alatahama. Hurricane Sandy cancelled all repeat performances. *sigh*

A view of about two-thirds of the rear property line, from the second floor deck, in 2008. The massive weeping willow is in the neighbor’s yard but caused a fine mess every time we had a windstorm, which was often. All of the trees were there when I bought the house, although there were no planting beds other than some ivy which originated next door. From this angle the central bed cannot be seen.

This photo was taken (summer 2007) while standing at the end of the Timberlite pathway and looking across the backyard toward the east property line. The neighbor’s hedgerow of honeysuckle and forsythia is still there, and you can see a bit of the west end of my back border which was mostly shaded so I populated it with hostas, ferns and hydrangeas. The black scrollwork bench seen in Part One was just past my right shoulder, and the full-sun center bed is at the left.

This somewhat misty-dreamy photo was an accident but it’s one of my favorite shots of the garden. Taken in 2011 from the center of the backyard and looking west this time, toward the center bed. The south-wall roses peek in along the right edge, and the white clematis ‘Henryi’ climbing up the arch has just opened a flower or two at the top… “all on a golden afternoon”.