My first holiday surprise was the discovery of a third “finish” on their chains. The basic (naked) chains are brass, and the alternate finish was a silvertone. However, it turns out that they also sometimes used a ‘coppertone’/bronze plating as well, which is unusual and I think quite pretty.

Here is their fine-mesh necklace with this coppertone finish, paired with a center station in their typical brass. An alternate colorway (“finishway”??) of this same necklace can be seen in the More Mystery Maker Discoveries post; that necklace had the brass mesh paired with a silvertone center piece. The photos above clearly show the difference in the brass versus coppertone. The necklace is 15 ½” long. 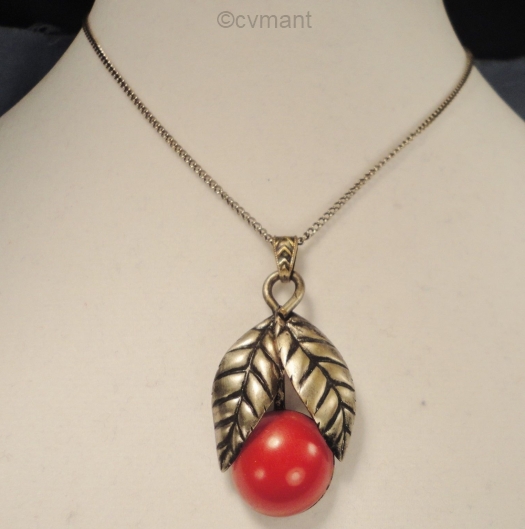 My initial doubts about whether the MJM did indeed sometimes incorporate a glass stone into their designs were dispelled by finding this double-leaf pendant with a red glass “berry.” A single one of these leaves was used in the mesh-chain leaf-and-flower necklace shown in green/white in The Mystery Jewelry Maker Returns and in brown/yellow in Several New Finds. What I am curious about, with this necklace, is whether the fine chain is original. I’ve only found one other pendant on this kind of chain (the green chevron shown first in my third post about this jewelry) and wondered the same thing . The chain is 15” long and the pendant/bale is 2” from top to bottom. (Note: Although the seller described the stone as ‘glass’, the presence of the rivet makes me wonder if it is Bakelite instead.)

The MJM’s chocolate/mocha colorway is one of my favorites, and here it is in a bracelet. The center station is the same rectangular-octagon as the green necklace/bracelet set shown in Yet More Mystery Maker Jewelry. Undoubtedly there was a necklace to match this bracelet, which is 6 1/2” long and fastens with their usual box clasp.

Here’s a totally new design, using their ‘narrow’ watchband-style flat chain. Although I’ve found the lobed/fan element on two other pieces, the small round medallion is a newcomer. Of course this is one of their typical green shades. I confess I almost bought this necklace for myself but then realized that the medallions would sit directly atop my prominent collarbones, a situation which I know from past experience would be unbearably annoying! The necklace was cited as 16” long which I assume means the green chain rather than the white.

A New Link Chain and Clasp 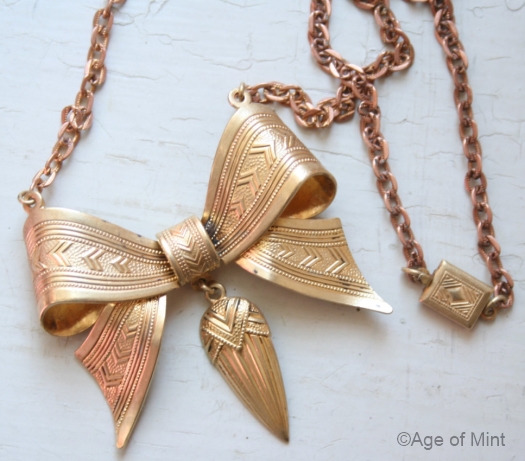 Because the vast majority of their large bow necklaces use their rectangular link, heavy oval link, or snake chain – all rather substantial – the first time I saw one of these necklaces I assumed the daintier chain was a replacement… and discounted it as a legitimate MJM style, especially since the box clasp was also unfamiliar. As luck would have it, I discovered the coppertone-finish choker and this necklace with the lighter chain also in that finish, within two weeks of each other! A quick revisit of old notes and images turned up the identical necklace (bow, chain, and clasp) in all three MJM finishes. It’s now been added to the roster of their confirmed designs. This necklace is 15” long; the clasp has the brass finish. 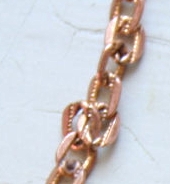 Unlike their heavier link chain which is plain, these links are prettily stamped in a milgrain pattern. Because I don’t yet know if the fine link chain mentioned above was also one of theirs, I’m calling this their “medium” oval/round link chain… just in case! 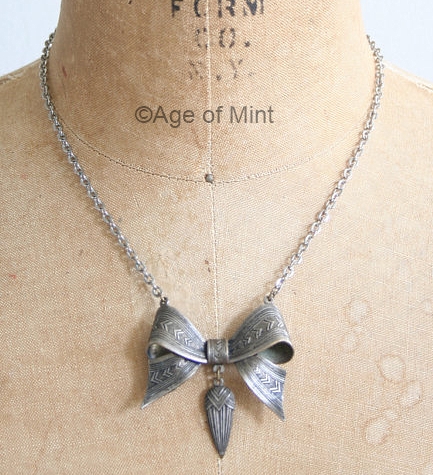 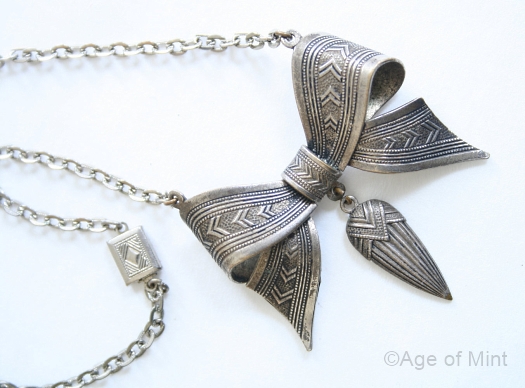 Here is the identical necklace but in the silvertone finish overall. It is 14 ½” long. It may well be that this particular clasp was only available in brass or silvertone, thus the coppertone chain got the brass clasp. 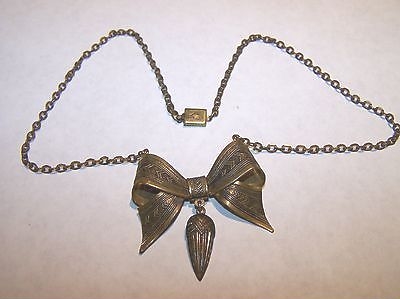 And lastly, here is the all-brass version. No specifications were available but it’s safe to assume it was about 15” long, like the others. 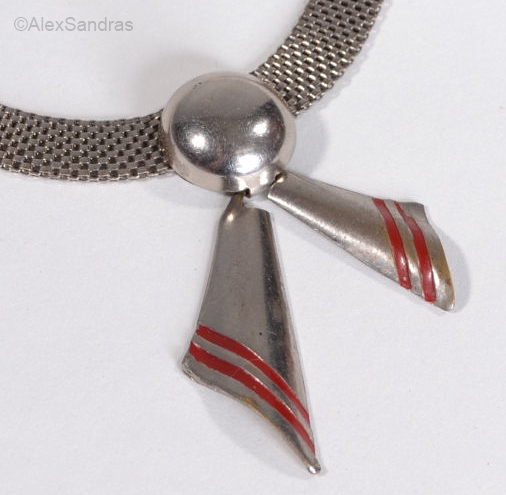 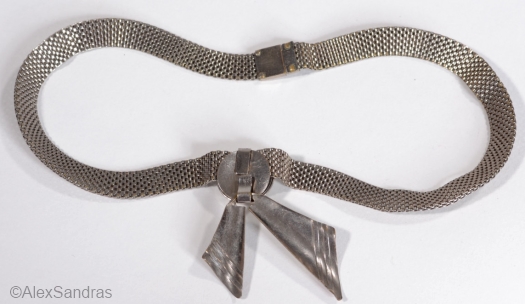 This silvertone necklace incorporates three known and one newfound design elements. The flat link chain is 16 ¼” long and fastens with their smooth-center box clasp. The plain dome in the center station appears to be the same as the one used for the tailored-bow ‘blank’ silvertone necklace shown near the end of the More Mystery Maker Discoveries post. The new element is the red-accented bow tails, which hang down 1 ¼” from the chain. The excellent photos clearly show that the tails are moveable.The design is very sleek and oh so Art Deco!

Of course the appearance of these new bow-tails immediately made me wonder whether there was a “full bow” version, as is the case with the large bow’s tails used in the coppertone choker’s element above. Nevertheless there was something about these bow tails that seemed slightly familiar, so I went on a new hunt and found something (two things, actually) quite unexpected. 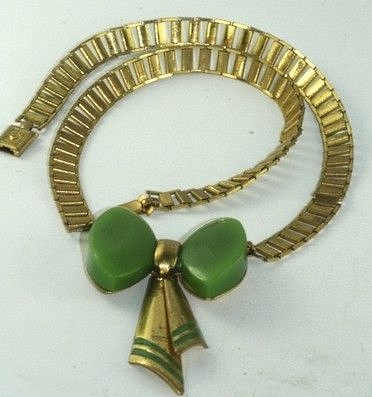 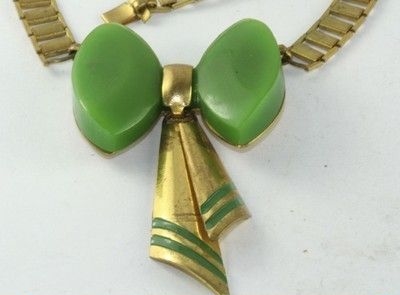 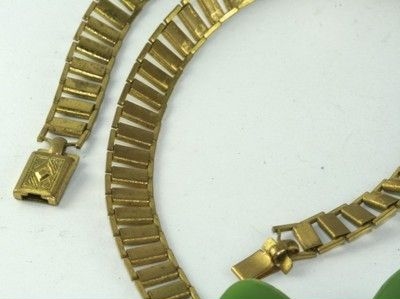 Here we have the identical bow tails, in brass with green accents, suspended from a bow formed by two pieces of green Bakelite atop a brass base. In this case the tails are positioned closer together than in the flat mesh necklace. The overall size of the bow is 1 ¼” across and 2 ¼” high. This ladder chain is another new find for this maker; it is 16” long and about ¼” wide. The seller cited the bow material as being Simichrome-tested positive for Bakelite. 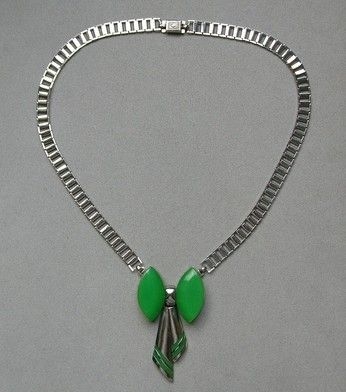 Here is the same necklace in silvertone. Noteice that the clasp on these necklaces is the same one used by the MJM with the ‘medium’ oval link chain shown in the previous section. That makes two specific chains that particular box clasp was used with. This necklace was cited as being 16 ½” long.

In this example the bow tails completely overlap each other instead of being very slightly separated; was it made this way, or did a previous owner bend the upper section to deliberately reposition them?? Unfortunately none of the photos of this necklace found to date included a view of the reverse, but the seller of this piece noted the “green galalith bow which is riveted to the back” rather than simply being glued. This is particularly interesting in view of the rivet seen on the back of the leaves/cherry pendant above! Like the others, this chain is 16” long.

And here’s a red colorway for the bow…although in this example the tails have gone missing. The seller noted that “the original box clasp was broken and has been replaced with a secure chrome spring clasp.” The chain’s cited length of 17” reflects the clasp change; with the original clasp it would have been 16” like the others.

One wonders what other Bakelite colors (if any) these bow necklaces were produced in!

Descriptions were evenly split between “bakelite” and “galalith” for the actual bow material. I am citing it as Bakelite because the seller of the first example actually tested it (see Vintage Plastic Jewelry: What It Is and Isn’t for the characteristics of these materials), whereas the others opted to call it galalith/’French bakelite’ instead, probably because they did not actually test it.

The fact that the Mystery Jewelry Maker occasionally used Bakelite as well as glass stones as a decorative accent opens up some intriguing possibilities among some other 1930s jewelry items sometimes seen in the vintage market. Nevertheless, I don’t think they used those materials often; the vast majority of their pieces used enamel paint as the decorative medium. I have never yet found an all-original item containing any sort of beads, faux pearls, or rhinestones, and don’t ever expect to; that would be totally at odds with their design aesthetic.

What new surprises will 2016 hold in store??