The first major 1930s Mystery Jewelry Maker (known here as the MJM) “update” for 2016 begins with some newfound examples of their bow-motif necklaces and bracelets; recent posts examined their small bow brooch and large bow brooch.

Because their chevron is actually a half-bow (or vice versa!) I am including these first two pieces here. This is a newfound colorway (black/white/grey) of their popular chevron/triple box chain necklace. It is 16″ long. 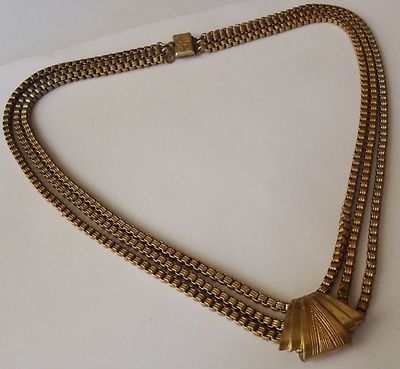 This is the first time I’ve seen their chevron/triple box chain necklace in plain brass – all other examples have at least some enamel paint decoration – and made completely without the box chain “fringe.” It too is 16″ long. 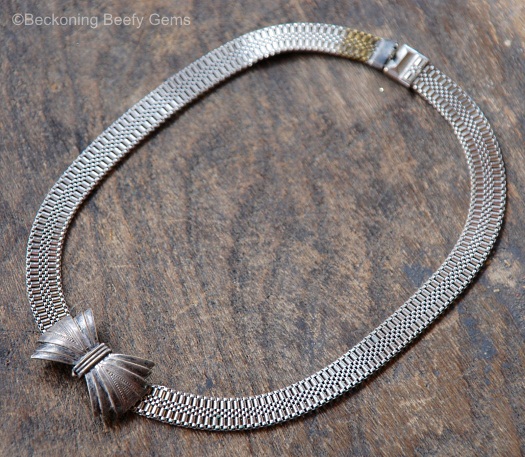 My very first Mystery Jewelry Maker post showed this same necklace in brass. The silvertone version was included in More Mystery Maker Discoveries but with a slight difference: the clasp ends of the chain came to a point and the closure was a spring ring instead of their typical box clasp shown here and on the brass version. This choker necklace is 15″ long.

Another colorway of their 1933/34 Chicago Worlds Fair commemorative necklace. The mesh chain is brass but the bow looks like and was described as silvertone. Part of the bow is painted red, and the Century of Progress medallion in the center is accented yellow (confirmed by description.) It was described as being 17″ long but that is probably a typo because I’ve never seen a flat mesh chain necklace from them in that long a length. The seller did not bother to properly reposition the bow in the center for the photograph (it can slide on the chain.) 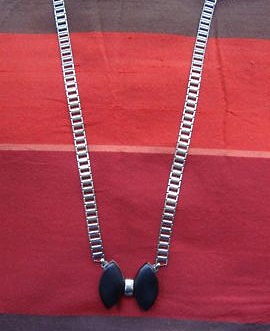 This Bakelite bow was shown in the Holiday Surprises post in red and in green, and here it is in black. The second photo shows how the Bakelite was attached with a rivet. The necklace is actually a choker (15 1/4″ long); the bow itself measures 1 5/16″ wide and just over 1″ high. No bow tails on this version.

Here is their large bow necklace on a newfound chain. Because I hadn’t seen them use this chain before and wondered if it might be a replacement, I waited until I found at least two other examples before adding this style to the list of chains they used. Like their other large-bow necklaces using the box, flat-link, and snake chains this one is also 16″ long.

Here’s the same black/white/grey colorway seen in the first necklace but this time as a bracelet using their “nubbly” bow and triple snake chain. One chain end has detached from the clasp. The bracelet is 7 1/4″ long.

This bracelet uses triple box chains instead of triple snake chains, and in a green/silvertone colorway. In a slight departure from their normal metal/color combo, the two outer chains were enamel-paint-dipped instead of only the inner one. 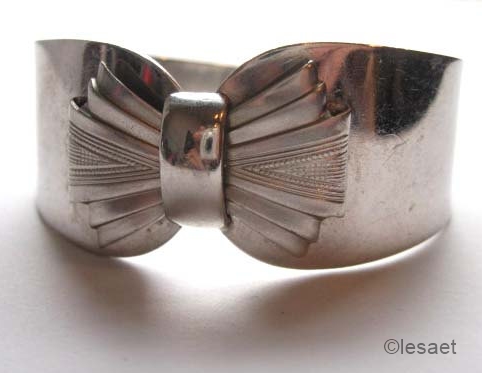 I never knew the MJM made any cuff bracelets until I found this one. This is, of course, their “tailored” bow and with a heavier center ‘tie’ which is in proportion/style to the solid cuff. I was surprised to see that the bracelet is only 1 1/8″ high (tall). It is slightly oval in shape, so the interior diameters are 2 3/8″ x 2″. I wonder if they used any of their other small-bow stampings for cuff bracelets; perhaps the smooth blank bow such as used for their Worlds Fair pieces?

The next Mystery Jewelry Maker post will contain some surprising new style discoveries!