When I first encountered operculum jewelry, my reaction was ‘What the heck is that?’ It certainly didn’t resemble anything I’d ever seen before; for one thing, they looked almost eerily like “eyes” of some sort. But were they manmade or natural?

They are indeed natural; in fact, they are part of a special type of snail’s shell. The word operculum (pronounced oh-PER-kew-lum; plural, opercula) is Latin for a lid or cover, and is typically used in reference to the body part of a living creature or plant. In this case it refers to a certain group of freshwater or marine snails. The operculum is located across the opening of the shell, so that when the snail retracts its body inside, this “trapdoor” closes as a protective barrier against predators or to avoid drying out in times of heat and drought. While the snail is alive the operculum is a flexible membrane, but afterwards it hardens and becomes just like a typical calcareous “seashell.” The appearance of opercula can vary (flattish, rounded, etc) depending on the species of snail but the type used in jewelry is shaped like a cabochon: a rounded colorful top and a flat reverse showing a delicate brown spiral pattern on creamy white. Because of their eye-like appearance these are sometimes called “cat’s eye”, “evil eye” or “Shiva’s eye” shells or jewelry.

Operculum jewelry became a huge fad during the Victorian era, with many designs using gold (usually 9kt) or sterling silver mountings. They were used in necklaces, bracelets, brooches, earrings and even cufflinks. Some particularly fine examples are shown below. 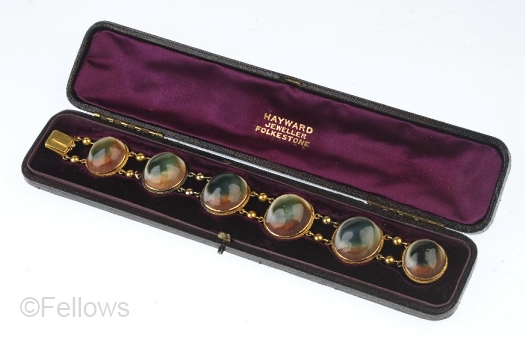 This lovely gold-and-opercula bracelet in its original case is about 7.5″ long. It weighs 45 grams which is a bit more than 1.5 ounces.

This 1880s bracelet in 9k gold has graceful scroll-shaped links and a safety chain. It too is about 7.5″ long.

Surprisingly, this bracelet is 18k gold… something you’d only expect to see in a fine jewelry/gemstone piece! The seven opercula are graduated in size. This must have been made for a somewhat smaller wrist, as it is only 6.8″ long.

This Victorian brooch, probably in 9k gold, is about an inch and a half long. Some crazing can be seen in the opercula, especially the lefthand one. 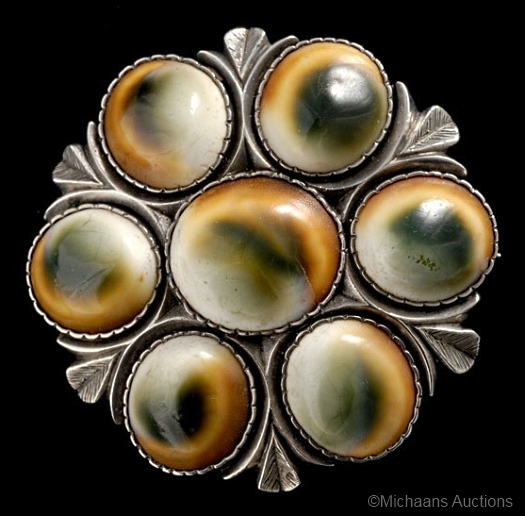 Set in sterling silver, this brooch is almost 2″ in diameter.

No information was provided about either of these brooches other than an approximate date of early 19th century. They appear to be set in silver, probably sterling.

Here’s a simple but elegant necklace and earring set in 9k gold. The opercula seem to be subtly graduated in size, to the largest (13th) central shell.

These are also set in 9k gold. Because of the lanyard style of the brooch, the operculum could be detached and used as a pendant on a fine chain. 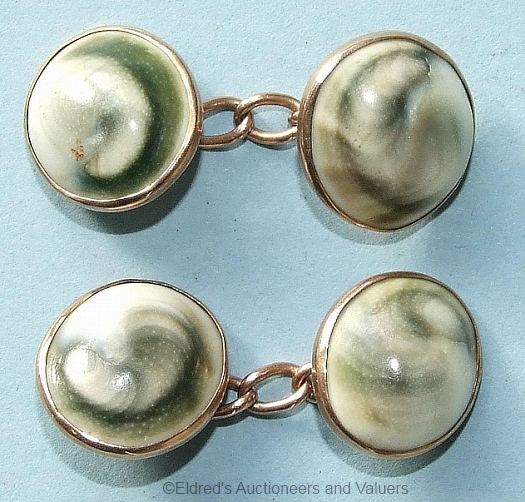 These gold-mounted cufflinks show how the color of opercula can vary; perhaps these were from a slightly different snail species, or from environmental conditions they simply developed more green coloration than brown.

This very unusual necklace used matrix turquoise as well as opercula. The “holes” visible on the short end(s) of the turquoise cabochons make me wonder if those were originally beads that were later incorporated into this necklace.

Although this gold and operculum ring is very pretty with its floral motif, I would worry a bit about potential damage to the shell if the wearer wasn’t careful. It seems to have survived quite nicely thus far, though!

There are 18 opercula in this gold-mounted necklace, and the smaller ones look very well matched in color. The accompanying simple bar brooch is a classic. 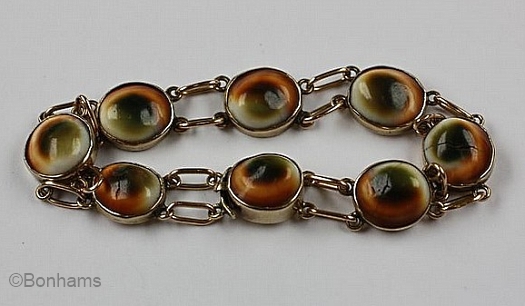 This collet-set bracelet is just 7″ long. The operculum at the far right is cracked; a reminder that these are shells, after all, and prone to damage.

Such a pretty combination of ornamentation and simplicity in this 9k gold bar brooch. 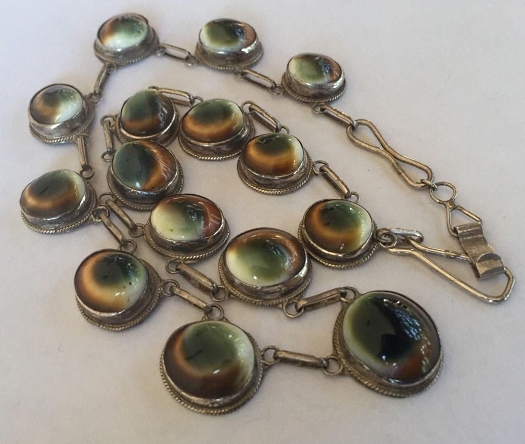 This sadly tarnished sterling necklace is 16″ long. The seller mentioned a hallmark which she could not quite make out. The opercula are graduated in size from 12mm at the clasp end to 18mm at the center. This necklace is a bit unusual in that it doesn’t have the typical hidden clasp

Another graduated opercula (14mm to 23 mm) necklace in silver, this time in a festoon style using 15 shells.

This sterling necklace is simple but stylish, and I can attest that it is extremely comfortable to wear. Sixteen inches long, the biggest operculum is about 3/4″ high. Notice that even though the opercula do not extend all the way to the ends, the necklace still has the typical hidden clasp.

Operculum jewelry was by no means confined to the Victorian era; there are other popular styles and examples dating from various decades of the 20th century. Several of these will be the subject of upcoming posts.

Leave a Reply to The Chatsworth Lady Cancel reply