The fourth popular motif in Victorian era Essex crystal jewelry was the nautical theme, particularly that of pennants which denoted specific yacht clubs or even spelled out words using the nautical alphabet. Boats and ships themselves were also represented.

This pair of flag (I’ll use the word “flag” here even though some of them are properly “pennants”) cufflinks have four crystals set into 18k gold. The first flag on the left is the Belgian diplomatic flag but I was unable to find out what the other three represent. Perhaps a reader of this blog can recognize them? Some or all might be yacht club pennants; such a flag is called a “burgee.”

This unusual brooch spells out “I love u” in alphabet/signal flags. It is set in 14k gold and is 2.25″ wide. This page has a list of all the alphabet flags and also the International Signal meaning for each one as well. For example, the signal (message) meaning of this flag brooch would be, from left to right: I am altering my course to port; You should stop, I have something important to communicate; Man overboard; I require assistance but am not in distress; I am altering my course to starboard; and You are heading into danger. (Upon reflection, perhaps the flag meanings aren’t all that unrelated to the spelled-out message!)

This flag motif ring is set in 18k gold and features rose-cut diamonds.

The entire flag alphabet is displayed in this 18k gold bracelet which is 7.5″ long and slightly less than 1/4″ wide. 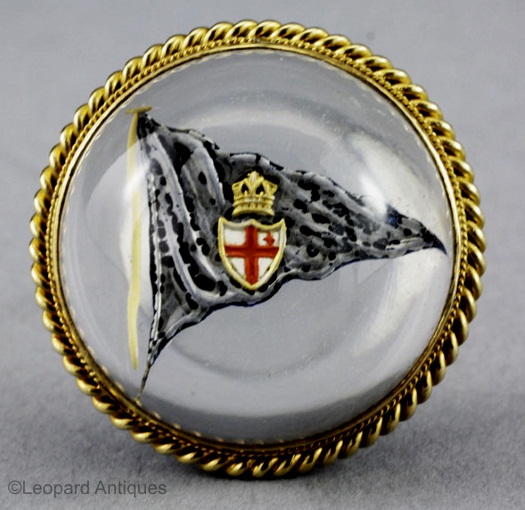 This Victorian brooch shows the burgee of the Royal London Yacht Club. It is 18k gold and measures just over an inch in diameter. Hallmarks identify it as being made by Richard Neville of Birmingham (1880-1917.)

The meaning/significance of this flag brooch design featuring a world globe and gate is unclear. Perhaps someone will recognize the design and let me know? The 15k gold content points to it being Victorian. It is a bit shy of being 1″ in diameter.

The burgee of the Royal Victoria Yacht Club is displayed in this bar pin which is 1.5″ long with a 3/8″ diameter crystal. It is unmarked but the seller noted that it “tested as 9k gold filled.”

This 14k gold brooch depicts a sailboat with a colorful spinnaker breasting the waves. It is fairly large at 1.75″ and has an appropriately themed ropework border. You can almost smell the salt air!

This brooch is hallmarked for Enos Richardson & Company, an American jewelry manufacturer who operated from the late 1890s through the Art Deco era. The Essex crystal sailing ship is mounted in 14k gold accented with deep blue and crisp white enameling. It is 1.5″ wide.

These cufflinks pair a sailboat with a ships wheel; age, gold content, and dimensions are unknown.

This turn of the century pendant depicts the Victorian steam yacht Ophelie and has three dates engraved on the back: June 5th 1900, June 16th 1900, April 11th 1901. I was curious about these dates and guessed that these might be races which the Ophelie participated in or won, so I did some cursory googling. No luck on the specific dates but did find a Forest and Stream entry dated in July 1900 mentioning the following:

The Department of State has presented a magnificent silver vase to Emmanuel F. Marguerite, owner of the French yacht Ophelie, for his humane conduct in saving the Captain, his family, and the crew of the American bark Rebecca Crowell, of Bath, Me. The Crowell was dismasted, unmanageable and sinking in the Mediterranean when overhauled by the Ophelie. The captain of the latter vessel lowered a boat, in charge of Paul Sabatier, his guest, and with great difficulty and in great peril a line was passed to the bark and she was towed to a safe place. The State Department has also awarded a gold medal to Mr. Sabatier and $20 to each member of the crew of the boat, in recognition of their heroic conduct.

In addition I discovered an excerpt from the 1903 book My Travels in China, Japan and Java in which the author mentions that he “visited my acquaintances M. and Madame Marguerite on board their delightful 500-ton yacht the Ophelie, in which they had come all the way from Marseilles, and in which they were returning after visiting India.” The size of the ship confirms that this pendant does indeed show the yacht that belonged to the Marguerite family.

Another yacht, although this time anonymous, is shown in this Victorian brooch signed by Benzie of Cowes, circa 1880. Further details were not given to accompany this unfortunately small photo.

Other posts in this series about Essex crystal:
Animals
Birds
Flowers

← Flower Designs in Antique Essex Crystal
A Delicate Balance, and (Un)Truth in Advertising →