You’d think, after going through the process five times already, that the process of house-hunting would by now feel less aggravating? Or at least that I’d be more blasé about it than not. Right?

Well, to borrow a word from a certain Presidential candidate: Wrong!

A recent showing of yet another disappointing entry into the local real estate market ended up inspiring this official, on-the-record whine of my top pet peeves regarding houses for sale… with apologies to Samuel Taylor Coleridge for the adaptation of his poem’s title.

Peeve #1: Fragrance Candles
These may not bother some people but for the many allergy sufferers like myself they can almost guarantee a swift exit from the house being seen. It’s hard to feel positive about the surroundings when your eyes are stinging and your sinuses are sending 3-alarm-fire signals to your brain. The house I saw last week had four of the misery-causing things aflame at the same time: one in the living room, one in the bathroom, one in the master bedroom, and the fourth in the downstairs den. Worse yet, they were all different scents! Even my realtor, whose sense of smell has been practically deadened by decades of smoking, noticed it.  Aside from the olfactory assault, a buyer’s first thought is likely to be “what horrible odor is the seller trying to cover up with all this?”  Plug-in air “fresheners”, incense sticks, and bowls of potpourri fall into this category too.

Peeve #2: The “Yuck” Factor
One would think that cleanliness would be a given, but you’d be surprised. A house I recently saw had a very nice oak stair rail, which was definitely needed because the stair was a bit on the steep side. Besides, I’m not such a spring chicken anymore that I can go up or down stairs without at least a hand laid lightly on the rail. In this particular house the entire length of the stair rail felt sticky (no kids in the house either.) So did the handles on the kitchen cabinets and the one closet door I risked opening. Ugh. How can a homeowner not realize when surfaces are frankly disgusting?

Peeve #3: Let There (Not) be Light
There have been houses where the owners must either be cats or have x-ray vision, based on the grossly inadequate lighting therein. This is usually encountered in basements and garages, especially if they are of the “overstuffed” variety. Call me picky but I don’t think I should need to wear a miner’s helmet to a house showing in order to avoid falling over something in the dark.

Peeve #4: Deliberate Obtuseness
Before I even ask to see a house for sale I’ve already done a fair amount of research; looked at the online listing photos, looked up the address on Google Maps’ aerial view to see what’s adjacent geographically, doublechecked the correctness of the property taxes with the Town’s online database (what the realtor has put into the listing is incorrectly low about 30% of the time) and done a drive-by of the house and neighborhood. I’ve also looked up the last sale date of the property to find out how long the seller has lived there. Nevertheless there are always a few questions that come up either during or right after the showing and it’s amazing how obtuse some sellers/seller’s realtors can be.

Take a simple question like “Is the septic system original or has it been replaced?” This is an important item because all the original ones were installed in either the 1940s, 1950s or 1960s which means their collapse date is already seriously overdue. Replacement is messy (ripping up a large part of the property) and expensive, so it’s not something a homeowner forgets. And there’s official paperwork for a replacement that is normally given to the next owner. But you wouldn’t believe how many times a seller’s answer to this question is “I don’t know.” This means the only way to find out is for the prospective buyer to hire someone (about $200) to inspect the system with a camera to see if the walls are cinderblock (original type, banned since 1970) or precast concrete (post-1970 and not subject to collapse.)  Often the “I don’t know” response means the seller or their realtor knows darn well it’s an oldie and just hopes the buyer won’t spend the extra $$ to find that out.

Other verbal gymnastics are more subtle. A “yes” answer to “are the floors hardwood beneath the carpeting?” doesn’t tell you that the condition of said wood floor is beyond repair due to cracks and/or water damage….as I learned to my considerable cost in The Money Pit. Likewise an “I don’t know” answer to “What’s underneath the kitchen flooring?” can cover anything from bare plywood to crumbling 1960s asbestos tile (ditto the previous flooring comment.) This sort of thing happens a lot when you live in a state that does not have a viable seller’s disclosure law; here it’s known colloquially as the $500 Get Out Of Jail Free card. Or more accurately, the Avoid Jail Entirely card!

I confess to always asking at least one question to which I already know the answer and know that the seller MUST also know the answer, simply as a veracity test if I am considering making an offer. If the answer is either “I don’t know” or something that I already know is untrue, my antennae go up and instead of treating any further progress on a “trust, but verify” basis, I switch to “distrust, then verify.” (Not unlike the USA and Iran lately.) 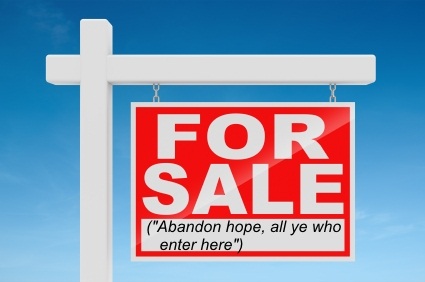 In a way I envy people who manage to find a house within only a few months; that’s never been my experience even when I was the only buyer and didn’t have to take another person’s preferences or opinions into account. It took a year and half to find the first house I lived in, even though there were fewer criteria back then. House #2 took six months to find the land and then 3 years to finish building (don’t ask.) House #3 took eight months to find, and then just over a year for House #4. I was still looking for house #5 (which unfortunately turned out to be The Money Pit) at the four-year mark but that was because outside events caused several breaks in the search. How long have I been looking for house #6? Two years, as of this week. If nothing else, I am persistent!

← Ode to a Squirrel
Perseverance Pays Off →

2 comments for “The Whine of the Anxious Househunter”