Merriam-Webster defines ‘serendipity’ as “luck that takes the form of finding valuable or pleasant things that are not looked for” and that certainly describes my accidental discovery of Royal Vienna portraiture in the early 2000s. I had gone to the Manhattan Art & Antiques Center one day in search of something entirely different, and….but before launching into that story, let’s first pause to examine the question of what “Royal Vienna” actually is.

The term Royal Vienna does not refer to a specific  manufacturer but instead to a style of painting and decorating porcelain items that was popular during the late Victorian period through the Art Deco era – roughly late 1800s-1920s. The items, which included plaques, decorative plates, vases, boxes and decorative serving pieces, were almost always copies of classic oil portraits. Many different manufacturers are grouped under the general heading of “Royal Vienna” makers. As expected when dealing with such a large group, there was considerable variation in quality but several makers stood out as exceptional such as KPM, Hutschenreuther, Dresden, etc. Also, the studios were not limited only to Vienna or even to Austria; Germany, France, and other parts of central Europe are also represented.

Most Royal Vienna pieces are not signed by the artist but the presence of a signature doesn’t necessarily make the piece better quality or more valuable than an unsigned one. However, one recognizable signature on Royal Vienna wares is Wagner, which doesn’t refer to an individual artist but instead to a family of them who worked for several different German manufacturers including KPM. Wagner pieces do tend to be near the top in terms of quality in the genre.

A common misconception is that the so-called beehive mark indicates an “original” Royal Vienna item. Actually it doesn’t represent a beehive at all, but rather an upside-down rendering of the shield found in the center of the coat of arms of the Hapsburg royal family during the 18th century. From 1718 to 1864 that royal family supported the Imperial & Royal Porcelain Manufactory located in Vienna, which produced some of the finest porcelain ever created – easily the equal of luminaries such as Sevres in France and Meissen in Germany. The pieces that were actually made during the Hapsburg era are beyond the reach of all but the most well-heeled of collectors. What is available as “Royal Vienna” today are all later items based on the originals’ style and technique.

There were and still are many iterations of the beehive mark, some genuine and some not. A quick google of “fake beehive marks” will generate a plethora of helpful guidance. The actual 18th century pieces bearing a beehive mark will always have them underneath the glaze, but modern pieces are still being produced today by importers and mass producers in Asia. Because the mark appears on so many thousands of pieces which are of widely varying ages and quality, its influence on the overall value of a piece is not very significant. Several of the most respected studios such as KPM and Hutschenreuther didn’t even use the beehive mark at all; they used their own mark(s) instead.

A quick word about KPM is probably in order. The original factory (named Königliche Porzellan-Manufaktur Berlin) was founded in 1761 but only lasted two years under the aegis of its original owner; King Frederick of Prussia then took over the works made it literally worldfamous via his patronage. It remained in the hands of the monarchy until 1918 when Prussia came under the dominance of Germany and its royal rule ended. The KPM factory survived under a new name of the State Porcelain Manufactory but was allowed to keep using the same marks as when it was under royal ownership. A unique characteristic of KPM porcelain items was that each was signed by the painter (who was often a Wagner.) KPM pieces have been a prime source for modern reproductions and/or outright fakes. Many of them are sold as “KPM style” and are often nothing more than transferware/decals but some have had phony brush strokes added in order to simulate the hand painted originals. Unfortunately the original marks are often also duplicated.

So with that background I’ll return to my serendipity story. I arrived at the Art & Antiques Center at 11 am on a Sunday but had forgotten that the shops don’t open until noon on that day. So I wandered around for an hour, looking through the openwork security doors trying to get an idea of which of the 100 or so dealer shops I might have the best luck in first, based on what I was looking for. Peering into one shop, an oval portrait on a wall about halfway inside caught my eye. It was too far away to see clearly with the store only partially lit, but there was something about it that made me decide that this was going to be my first stop when the clock finally struck twelve.

When I did enter the shop, I was surprised to find that what I’d thought was an oil painting was instead a Wagner-signed portrait on a KPM porcelain plaque, set in a gilt wood frame. Knowing nothing about Royal Vienna at that point, I was somewhat unprepared for the price; let’s just say that if a comic strip artist had drawn the scene, there’d have been a balloon over my head with the word *gulp* inside it. I thanked the proprietor and told him I’d need to “think about it for a bit” and might return. After spending the next three hours looking at other items and not being able to get the portrait plaque out of my head, I went back and bought it.

As he was wrapping my purchase the owner asked me “You know who she is, don’t you?” to which I shook my head. He replied that the subject was Queen Louise of Prussia, after the famous portrait of her by Gustav Richter in 1879. Since then I have seen numerous versions of that portrait but still think that the one I serendipitously discovered is one of the nicest. Although I’d love to own more Royal Vienna pieces, fiscal responsibility seriously works against that… but it is always fun to admire other fine examples!

The following is a selection of Royal Vienna portraits on porcelain plaques. Future posts will include vases and other items in this genre.

The title of this unframed Wagner-signed KPM portrait is “Amoritta”. Size is small at only 6″ x 9″. 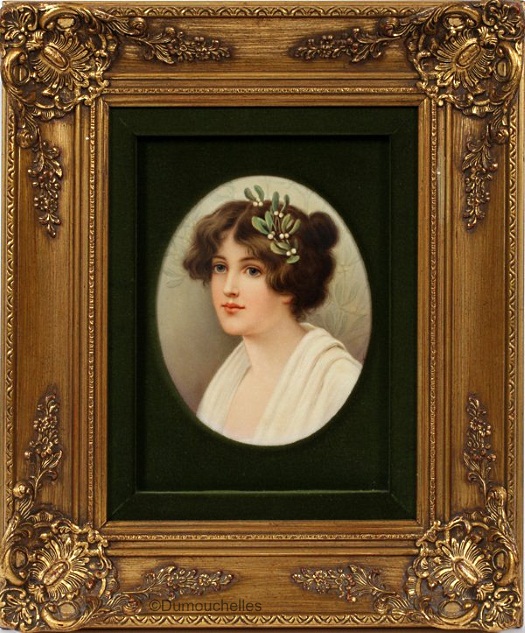 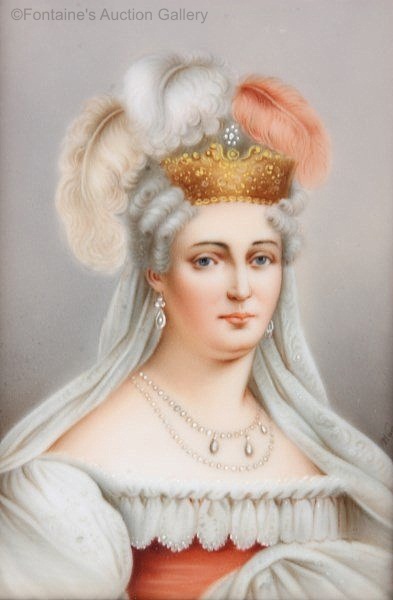 This portrait of Marie-Therese, Duchess of Angouleme is signed Wagner but there are no factory marks. The plaque itself is 6″ high x 4″ wide; including its gilt frame it is 11″ x 9. Known first as Madame Royale before her marriage to the Duke, Marie-Therese was the daughter of Louis XVI and Marie Antoinette. 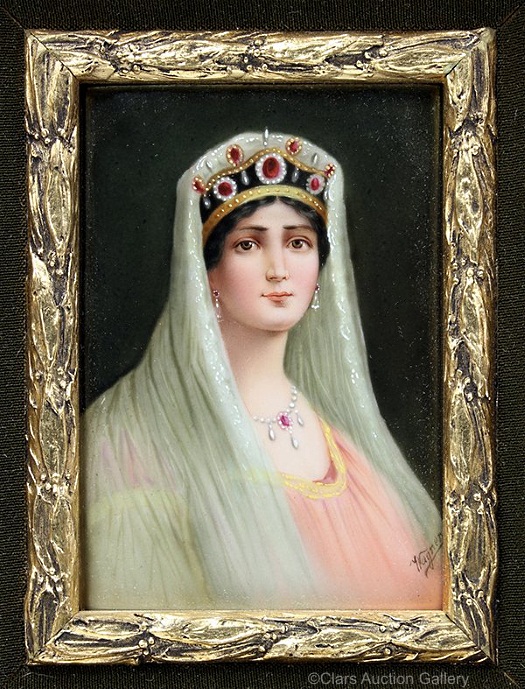 Another Wagner portrait from an unknown German factory although this one does bear some marks: an impressed crown shield with the letters C M H, and also an impressed number 107. I feel as if I should recognize the subject of the portrait but am drawing a complete blank. Size was cited as 14″ h x 12″ wide but no clarification as to whether that includes the frame. 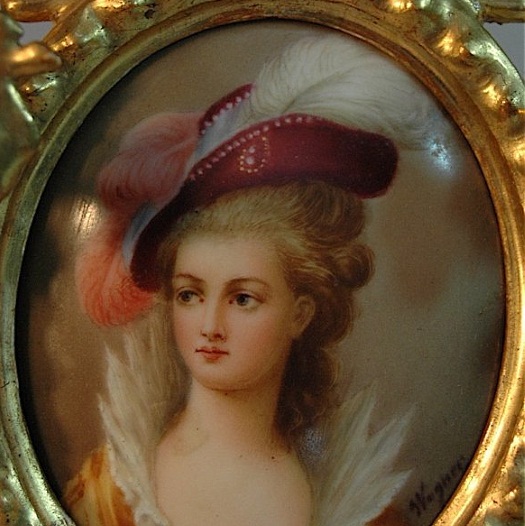 It’s somewhat unusual to see Royal Vienna portraits of males but this KPM model is an exception. Marked as circa 1900, it is also signed Wagner. The plaque measures 11″ x 9″ unframed. For some reason this portrait reminds me very much of the late actor John Colicos in his role as Thomas Cromwell in the 1969 movie Anne of the Thousand Days. 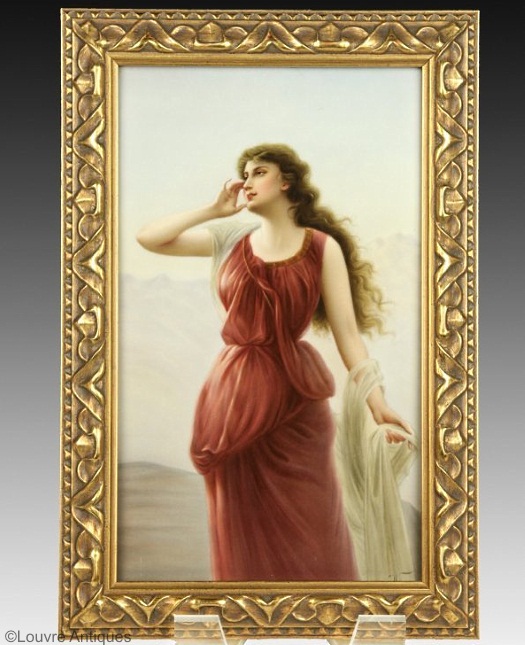 A somewhat larger Wagner which is 15″ x 9.75″ not including the frame. No factory marks. 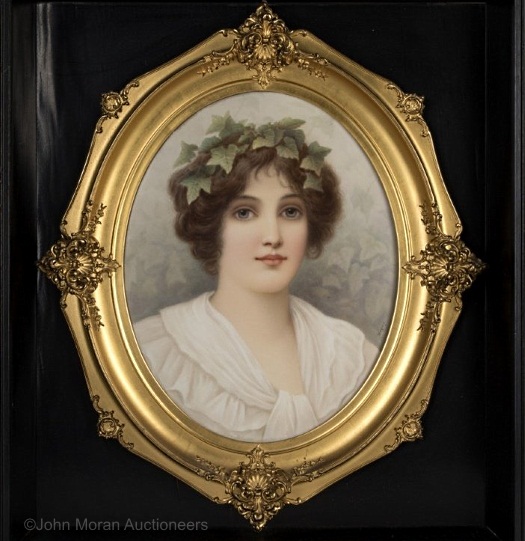 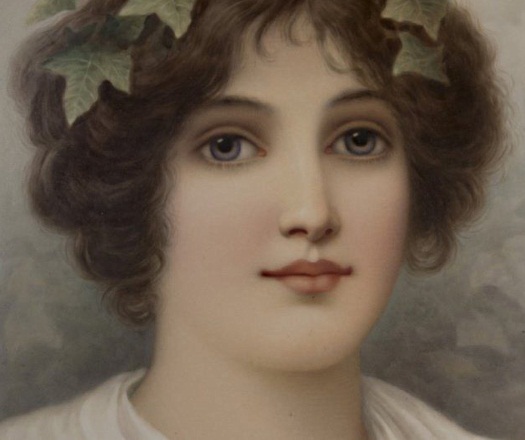 This is extremely similar to the second example but not exactly the same. It too is a Wagner for KPM. It is a larger scale than the foregoing, with the plaque itself being 16.75″  high and slightly more than 13″ wide. The framing is a bit unusual because the oval gilt frame was mounted into a black lacquered wood shadow box.

While the portrait plaques were generally of a smallish to moderate size, some of the vases shown in my next Royal Vienna post are very hefty indeed!

← A Quiz You May Ace (or not, depending upon how old you are)
A Mystery Jewelry Maker Update for the New Year →