Launching into 2017 with an update on my 1930s mystery jewelry maker, including four newfound designs and several new colorways. All examples are necklaces; there seems to be a dearth of MJM bracelets lately! 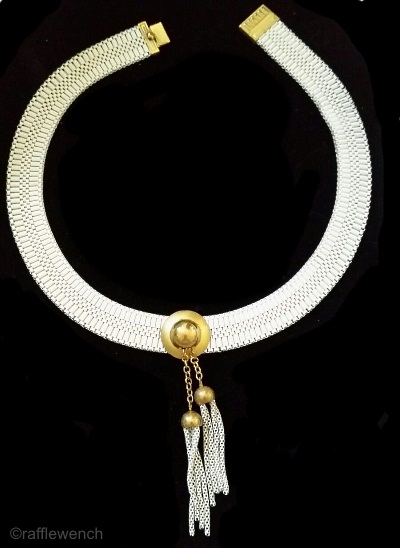 Although the mesh is their familiar ‘watchband style’, the color – pure white – and the central-station tassel is definitely new. A long choker/short necklace at 15 1/2″ and 5/8″ wide, the longer of the two tassels drops 3 1/2″ … great for a deep decollete!

This one’s strictly a choker at 15″ long, in their other mesh style (the wider 5/8″ version.) Although the three X-motif stations are new, the ribbed pattern coordinates with their box clasp and also evoke one of the unique front clasps (the one I’ve dubbed the “architectural”)  used in their patterned mesh necklaces. This example is all brass but I wouldn’t be surprised to someday discover an enameled version.

Because this necklace utilizes four tubular mesh strands it is wider than most MJM styles, at 3/4″. Length is 16 1/2″. This is the third colorway I’ve seen in a quadruple-strand style but is the first that has only two colors (red and off-white); the others were in four different shades of a single color.

This intriguing pendant design reminds me of ancient Sumerian carvings, although most would probably classify it as “Egyptian Revival.” The ribbed center matches one of the MJM’s smaller box clasps that they used on double- and triple-chain necklaces. This lozenge/link chain has been found previously but with a bow-and-drop pendant in those cases. Chain length is 16″; the pendant is 1 1/2″ long including the bale and is 1″ wide at the bottom portion. 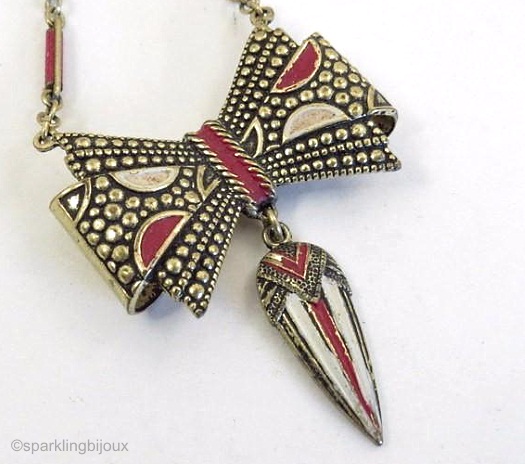 Here’s their same lozenge chain but in a third colorway: a true red. The other two colorways to date are the green shown above and also a brownish pink (possibly salmon pink, but it was definitely not red) seen in my June 2016 update. It’s the third example found to date pairing this chain with their nubbly bow plus the drop element normally combined with their large bow; 16″ long.

Speaking of their large bow, here it conveniently is in a newfound chain pairing. Although the same  colorway was shown in my June 2016 update, that bow was instead paired with their flat mesh chain painted in black and blue stripes; this is their heavier link chain, and is 16 1/2″ long. 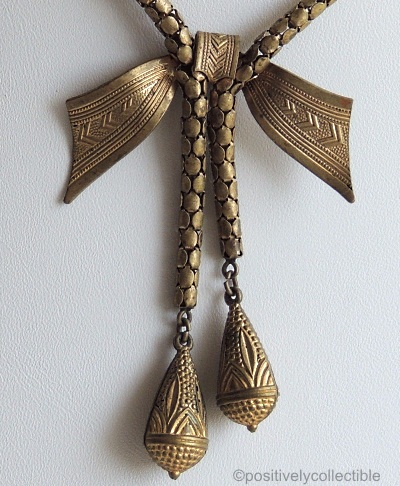 I’ve seen this snake chain/half-bow lariat design only once before, way back in only my second Mystery Jewelry Maker post. That one was decorated in brown and cream, including the finial ends. The existence of this plain brass version does invite speculation about whether they also produced it in the silvertone finish. 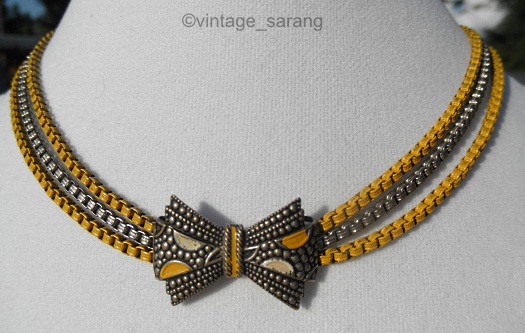 Did someone say silvertone? Here’s their triple box chain choker with their nubbly bow, in mustard yellow and silvertone. The box clasp is accented in yellow and cream/white to match the bow. Typical choker length for this style at 15 1/2″.

Naturally, Murphy’s Law would decree that after finally locating my sought-after lotus flower necklace another one would appear in a different colorway! Honestly if there hadn’t been so much paint loss to the chain links I might have bought this one as well. (Another factor was that the colors go with absolutely nothing that I own or might look less than terrible in.) The extent of paint loss on so many of the ribbed links does puzzle me; there are just enough traces to show that they were indeed all accented as seen in the other examples of this necklace. Quite a shame.

Now this iteration of the same necklace really made me do a double-take because for some reason the “lotus flowers” were only partially cast, resulting in small “fans” instead! In fact, there are several atypical things about this necklace. First, of course, is the truncated flower/fan casting  but there’s also the defective (??) painting of them: three of the five fans contain white-painted sections while the other two are solid green in the same areas. And the white sections don’t match each other. The painting of the ribbed links isn’t consistent either, because they are green, white, and black (why black??) but not in the usual alternating fashion which would at least make some sense.

Finally there’s the question of the back of the casting, because the stamping is also seen on the reverse. Why is that unusual? 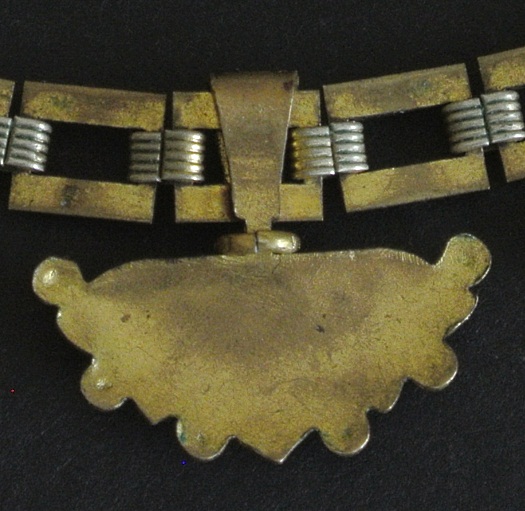 Because here’s what the back of all the “full lotus flower” stations looks like; those are all completely plain. So it seems as if there were two molds: one that included the lower portion and one that didn’t. The thing that most puzzles me, though, is that the proportion just feels wrong in the ‘fan’ version. If they wanted a fan motif, why not make it larger than this? Maybe these simply feel too small because I’m used to seeing the other version and so this truncated piece appears too small. That doesn’t explain the odd paint job, though! By the way, the clasp on this one was correctly noted as not being original; this chain was always given the box clasp shown on the previous example.

My next Mystery Jewelry Maker update will feature more of their interesting patterned-mesh necklaces.