Who’d ever think that the same simple chain that has dangled from millions of light fixtures for the past 120 years also inspired a jewelry fad? It’s true; the humble brass ball-chain has a costume jewelry genre all its own.

In August 1896, Harvey Hubbell patented a pullchain lightbulb socket in response to a real need in the burgeoning Victorian market for that newfangled invention called the electric light. In those days the only way to turn an individual light on and off was by a small key inserted into the socket itself. This was fine for fixtures attached to a wall within easy reach but what about the ceiling lights? Hauling out a ladder every time a ceiling light needed to be operated – and some of those old ceilings were very high indeed – simply wasn’t practical. 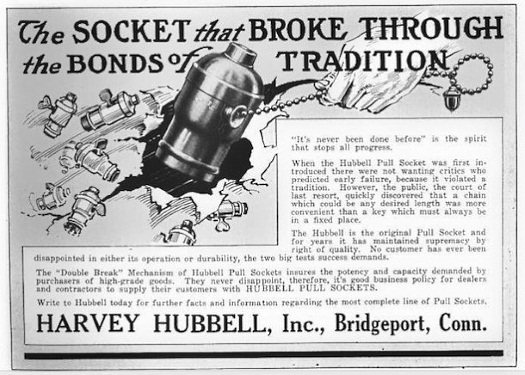 Enter Hubbell’s invention which instead of a key used a brass chain that could be cut to any length required. This ad appeared in 1915.  Rustproof, heatproof and sturdy, the ballchain was the quintessential utilitarian and therefore boring element… until a jewelry company (or two) latched onto the idea during the 1930s.

Because ball chain necklaces and bracelets were always multi-strand, they have some form of box clasp and indeed typically a variation of the exact same one. Necklaces range from a minimum of two strands (in the back section only) to twelve or more. The usual size (diameter) of the ball chains is approximately 3mm.

The two- and three-strand clasps are identical except for the capacity.

The four-strand clasp is necessarily taller. The clasp on the right does not have the typical pierced design. 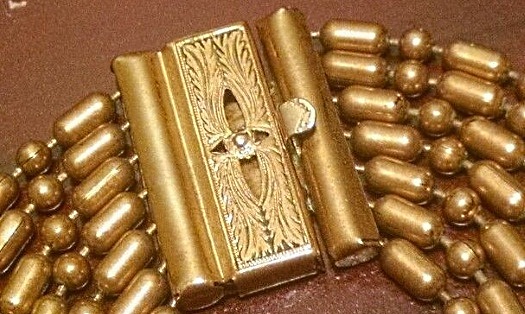 The five-, six- and seven-strand clasps follow the same general pattern, except that the larger capacity clasps have plain sidepieces instead of being cast in the shape of the chain balls.

Here’s a pretty floral clasp for an 8-strand necklace. Unlike the others, this one connects in the center rather than on one side.

A nine-strand clasp in the most typical design.

I could not find examples of 10- and 11-strand clasps, so we’re jumping straight to what seems to be the maximum: a dozen strands! Now let’s look at some of the actual jewelry pieces, divided into two categories by color treatment.

Single-color ball chain jewelry is plain brass or gold-tone plated. It’s the most commonly seen form of this genre and in fact most of them may have been made by the same anonymous company. Some – perhaps even most – of the chains may have been of aluminum or base metal, although the clasps and connecters were brass. 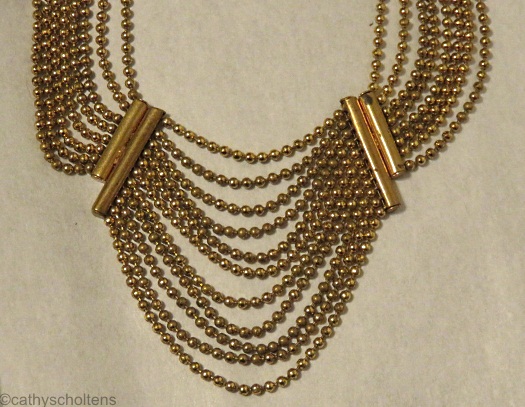 This necklace incorporates three different chain “counts” via the use of bar connectors. The back section has three chains, the side sections hold 8 chains, and the frontmost section has 11 chains. The shortest (closest to the face) section is 18″ long. 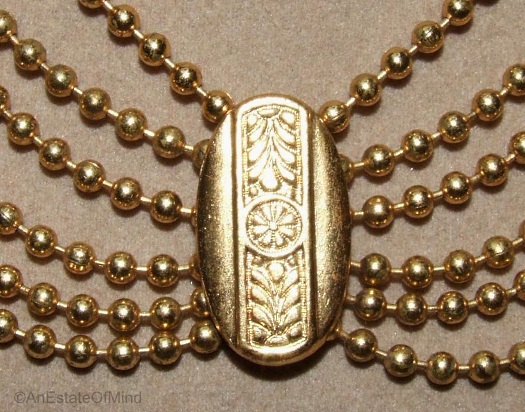 This necklace also uses connectors but only to provide a draping effect; there are six chains throughout but they are spaced differently. Length is 15.5″. 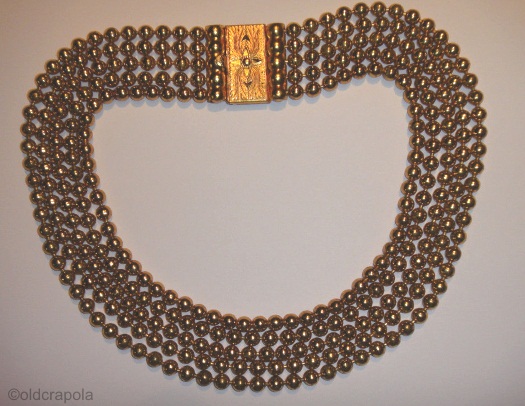 This simple five-strand necklace is 16″ long.

Twelve strands, all the way around! Including the box clasp, the shortest chain is 15″ and the longest is 23.5″. 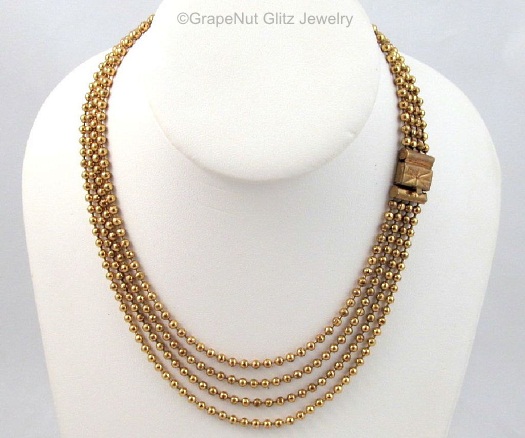 A four-strand necklace with the atypical box clasp shown above. The seller, GrapenutGlitz Jewelry, noted that the clasp was “secure but tricky” and that the tension of the male piece sometimes needs to be fiddled with.  The shortest chain is just shy of 15″ and the longest one is 16.5″.

This is a ball-and-lozenge chain, also called a ball-and-bar chain. I’ve never seen this type used in a light fixture, although it does give added interest to the simple design. 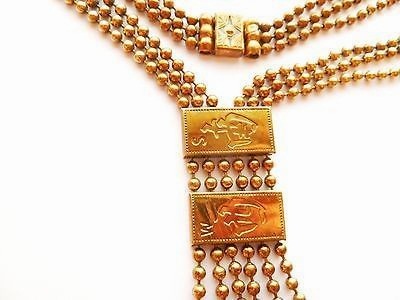 Here two connecting panels are used to create a waterfall effect. The 1″ wide panels have a chinoiserie design and hold six chains, three on each side and then a short and longer drop that is six chains wide. The inside chain is 16″ long and the drop section is 3″ overall. The seller cited a patent-pending mark on the side of the decorative panels.

Here’s the unusual flower clasp seen above; it is approximately 1″ x 1.5″ and holds eight chains which are widely spaced. The shortest chain is 14″ long which is choker length but when worn there is a distance of about 7.5″ from it to the longest chain. 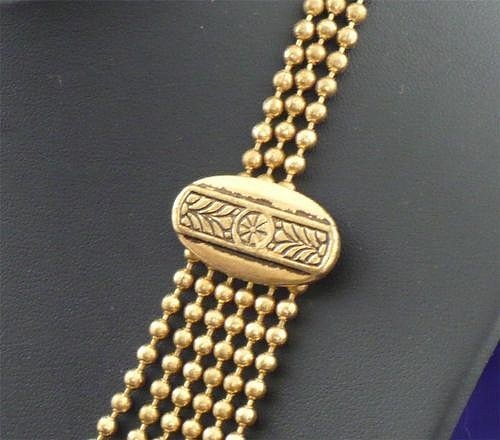 The two oval connectors allow this necklace to go from three to six strands; the ‘balls’ are 3mm diameter. Seventeen inches long plus a 5″ draping distance gives this a total of 22″. The seller described this as being more goldtone than brass, indicating that it was given a bright plating.

This pretty connector, a combination of a scroll and a pleated fan(?), allows for six chains in the back section to increase to 11 chains on the sides/front. Cited as being 20″ long.

Three different connector types were used in this necklace: a bar, a filigree ball, and stylized leaves(?) bring this from two to six strands. 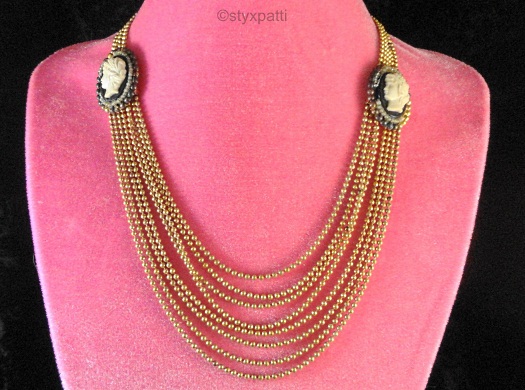 Not all connectors were brass, as seen in these plastic faux cameos. The front section has eight chains while the back has six.

Another cameo but this time front and center; the seller described it as being a carved shell cameo rather than a faux version. Unfortunately this was the only available photo so we don’t know if this was the only decorative element. Nine chains in this front section, and an overall length of 16″ including the cameo which is about 1″ wide.

An oh so Deco bow motif with a black glass accent also allows for a geometric waterfall fringe made of 16 (!) individual chains. The detail view shows the attachment method on the reverse. Almost 17″ long at the bow’s location; length of the fringe wasn’t cited. This bow reappears below in another capacity.

In these pieces the chains were either plated or painted in two or more colors. 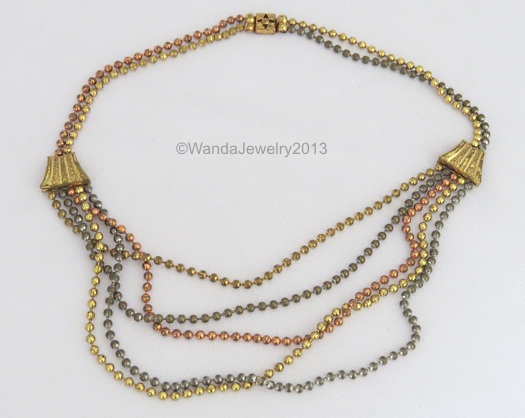 The fan-shaped connectors are one-half of the bow shown at the end of the previous section. One sees this quite a bit in other examples of 1930s jewelry, including necklaces made by my ‘Mystery Jewelry Maker’.

This necklace is atypical in two respects: there are only two plating colors (gold and bronze), and the chain balls are graduated in size. This is clearly the clasp that matches the connectors seen on other examples. The seller cited a Pat. Pending mark on the clasp, and that the length is 19″ although it’s unclear whether that refers to the shortest or the longest chain. 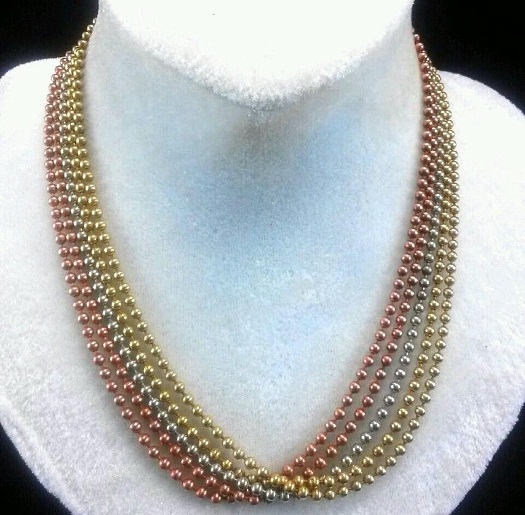 This tricolor five-strand 18″ necklace is so shiny as to look almost brand-new; although there was no photo of the clasp, the description mentions it having a Pat. Pending mark and so it does sound as if it’s the same vintage as other examples.

A tricolor necklace/bracelet set with oval medallion connectors. The shortest necklace chain is 17″ and the longest about 20″; it goes from four strands in back to eight in front.  The eight-strand bracelet is 7″ long and just over an inch wide. It appears as though the medallion’s ball-shaped outer rim was originally painted black to match the center, which may be either glass or plastic. 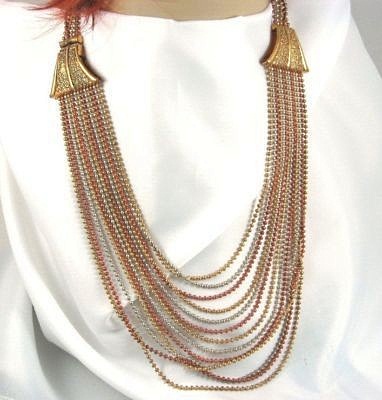 This is a ‘doubled’ sister necklace to the tricolor example shown first. Using the same half-bow connectors, this one goes from four strands in back (versus two) to 12 in front (versus five). On this necklace the shortest strand was cited as about 20″ including the clasp, and the longest as 28″. The widest portion of the fan connector is 1.5″ which makes sense because it needs to accommodate a dozen chain ends. 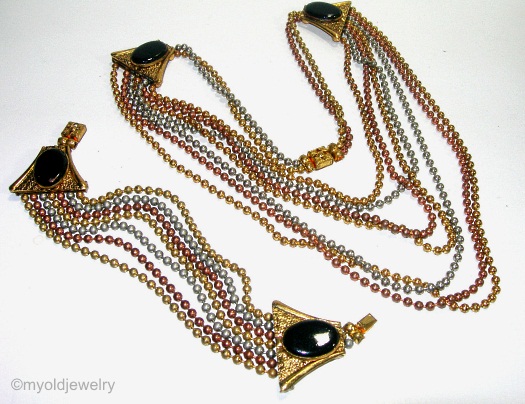 Here are the same half-bow connectors but with an oval glass stone added to the top, just as it was added to the center of the full bow in the fringe/waterfall necklace at the end of the first section. For the bracelet, the same two-strand box clasp used for the necklace was attached to the narrow end of the half-bow connectors. The bracelet (7.25″ including clasp) and necklace (18″ at the shortest) both hold seven strands.

Probably made by the same company, this waterfall/fringe tricolor has seven tricolor leaves as well. I count a whopping 19 graduated lengths of chain on this one.  The excellent detail photo shows how everything is attached; the chain ends were inserted into the small brass tube which was simply crimped shut at both ends. The individual leaves would be soldered together where they overlap each other.

Plating colors weren’t always gold, silver, copper or bronze; here’s one in pink and blue! The seller mentioned that it was extremely lightweight which lends credence to the multicolor plated pieces having used aluminum chains. The shortest chain is only 13″ long which would have been uncomfortably snug for most adults even as a choker; the longest is 15″. Therefore this was probably intended as a little girl’s necklace. 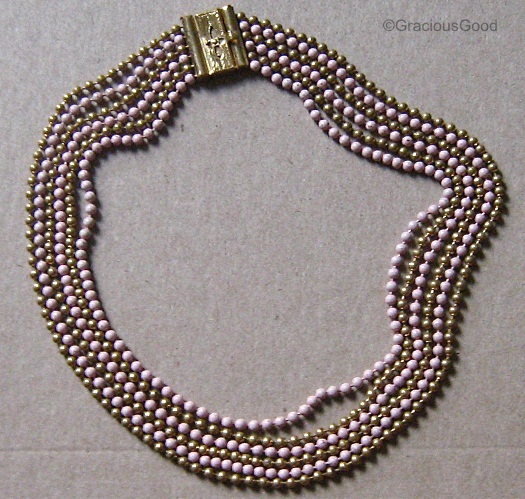 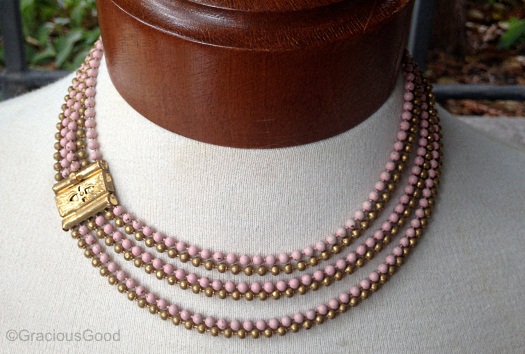 The least common color format of ball chain jewelry seems to be those that were enameled, or decorated with enamel paint instead of plating. This six-strand necklace alternates plain brass strands with ones that were dipped in baby-pink paint. Small areas of wear are visible where the pairs of strands contacted each other while worn. The shortest chain is 18″ and the clasp has the expected Pat.Pend. mark

Probably from the same manufacturer, this combines brass and baby blue paint with charming flower-element connectors. With the shortest of the seven chains being 18″, this would be the perfect “fill in” for that scoop-necked springtime top!

Here’s the same floral connector used with the tricolor plating in gold-, silver- and copper-tone. Two back strands increase to seven, with the shortest one at 15.5″ long. The flowers themselves are 1.5″ in diameter.

Add a second layer of brass petals to the flower connector shown above, used deep red paint instead of baby blue, and voila! Red roses. The third (central) connector gives it an entirely different and more sophisticated look. The shortest chain is 17″ and because of the center section the length only increases by about 2.5″ from that strand. 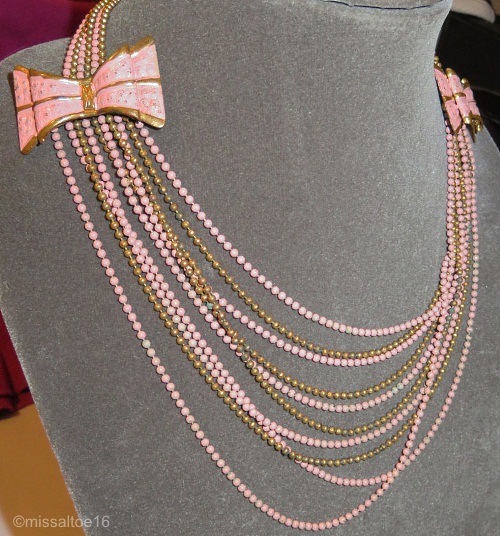 Close examination of some of the ‘brass’ chain balls reveals a grey material underneath, upping the odds that at least some of these necklaces were made from plated aluminum or base metal. Oddly, the pink enamel paint-dipped strands seem to have fared better! The pair of bow connectors are the same as seen above in both their full-bow and half-bow/fan formats. This necklace displays 10 strands in front and six behind, and is 18″ with a drape of almost 4″.

Of course these various clasps and connectors would have been available to any jewelry manufacturer of the day, but the similarities between most examples of ball chain jewelry suggest that perhaps only one or two companies may have been making these.  But just as with my Mystery Jewelry Maker, we’ll probably never know who they were unless one turns up on (great?)grandma’s top shelf unworn with its paper tag still on it!