The animals, birds, and flowers aren’t the only ones finally emerging from winter hibernation: Why not a springtime update on new Mystery Jewelry Maker finds as well? Three newfound designs plus an intriguing custom modification are included in this batch.

The “least new” is probably this large bow paired with their brass watchband-style pointed-ends mesh chain, because its silvertone counterpart was catalogued waaaay back in post #2 of this series (for comparison, the post you are now reading is #25!). I can’t believe it’s taken this long for the plain brass version to surface.

While we’re on the subject of bows, here’s an all-white version of their three-strand nubbly-bow bracelet. Plain white examples seem to have been less common than their other colors. I chose not to add a closeup photo because the bow had a truly awful case of verdigris….. the bane of vintage metal costume jewelry. 😦 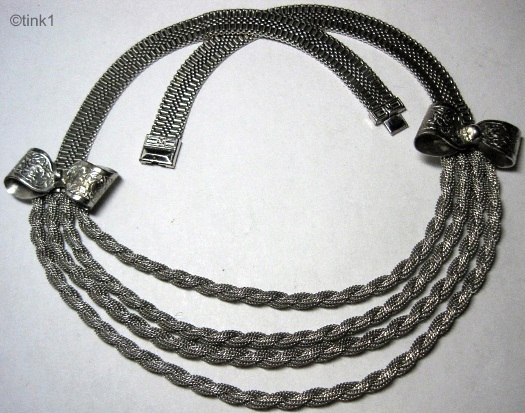 And this is a new bow discovery for the MJM database, which I’ve dubbed their “soft bow.” When I first saw one of these some months ago I was suspicious that it might be an assemblage – or as the euphemism seems to be nowadays, “repurposed” – because although the flat mesh chains and clasp are definitely MJM elements, I’d never seen either the rope chain or these bows before. However, after later finding three examples (one brass and two silvertone) for sale online simultaneously, it seems that they were production pieces. The overall end-to-end length is 17.5″, with the four rope chains dropping down about 2.5″ when worn. Both of the flat chains are their 3/8″ wide versions. To date I have only seen this necklace in these two finishes (silvertone, and what I call their “bright brass” or “goldtone” plating.) It would be interesting to know if they also made any with enamel lpaint accents, as many of their other bow designs and/or flat mesh necklaces were. 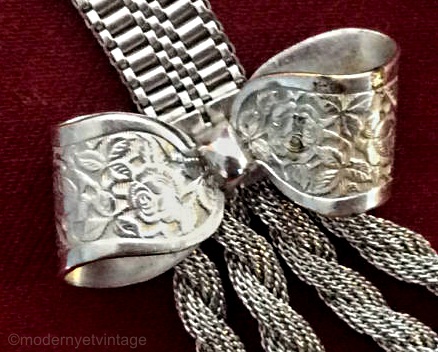 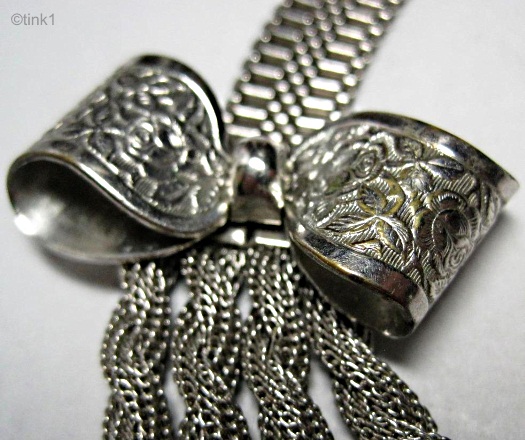 The bow is embossed with a rose motif. The third photo shows the construction which allows for the attachment of a flat chain at the top and four rope chains at the bottom. Sellers differ a bit on the actual dimensions of the bow; one seller cited it as 1 1/8″ wide while another claimed it is only 3/4″ across. They seem to agree on its being 1/2″ high, however. 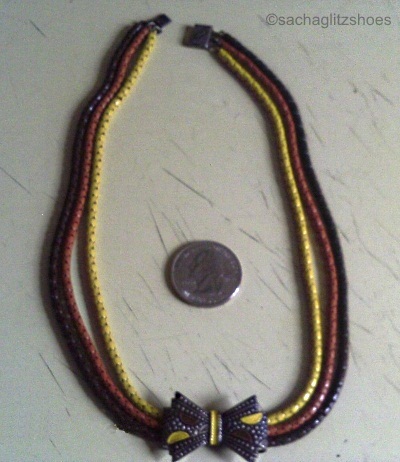 I normally don’t use poor-quality photos but because this necklace is a slightly different colorway I decided to include it with as much improvement as Gimp could offer. Typically this colorway is a combination of bright yellow, pumpkin orange, and chocolate brown but on this necklace the center chain appears to be red. True red doesn’t seem to have been a color that the MJM used very often, so it’s worth including even though the photo leaves much to be desired. The necklace is a choker at 15″ long.

This necklace was shown in the 2016 Midsummer Roundup in a different colorway but here it’s in classic black and white. This nouveau-look oval decorative medallion (not a clasp) has only been found on this particular necklace so far. It is 28″ long, a true flapper length. 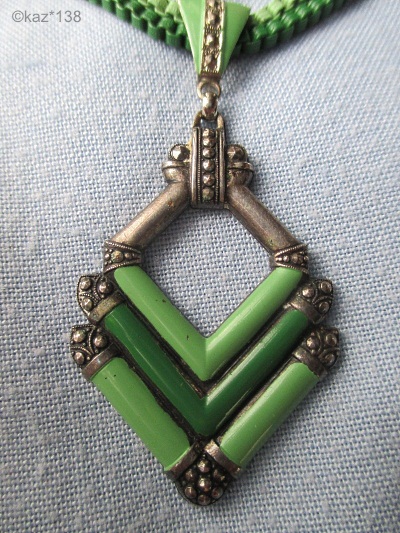 Forgive me if I vent just a bit about this lovely necklace which is the third colorway that I have seen it in – the first being my mom’s necklace, in red, in my very first post. The other was the blue colorway which I will forever kick myself for accidentally missing when it was for sale in 2014. I would definitely have bought this green one if only the seller had not misrepresented it as being “attributed to Jakob Bengel” despite the complete lack of any evidence supporting that claim and in the face of all evidence to the contrary. As a result, it was significantly overpriced and while I would have been happy to acquire it at a fair price based on what it actually is (a very nice piece of American 1930s costume jewelry by an anonymous maker), I’m not willing or able to throw money away willy-nilly. I do hope, however, that whoever did eventually buy this necklace didn’t do so simply because they believed it to be a Bengel piece. 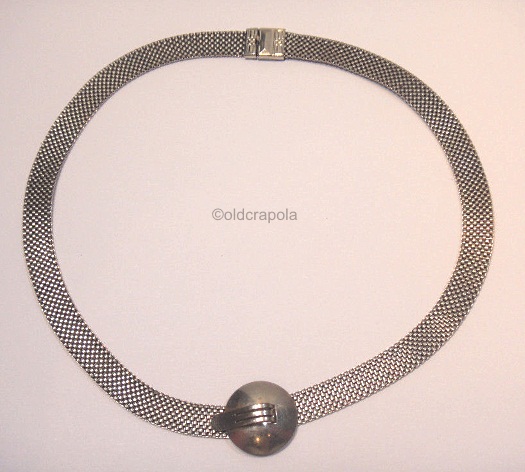 Speaking of machine-age styles, here’s a classic example using their plain silvertone flat mesh (width not specified but probably the 3/8″ version) chain with a tab-topped dome element. It is 16.5″ long.

This is the same tab that was combined with a slightly different circular element in another necklace style, seen in yellow in the Midsummer Roundup and in blue in The Mystery Jewelry Maker Returns. In those iterations the central piece is flat-topped rather than domed. 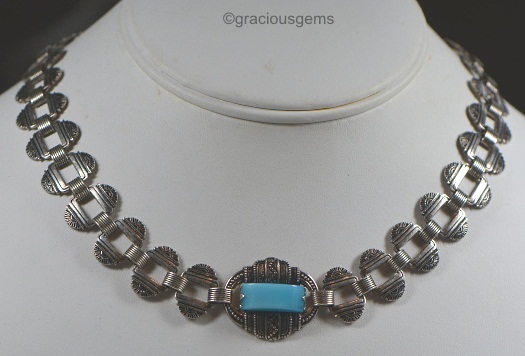 This is another necklace that I noticed last year but had no indication that it was a Mystery Maker piece other than having just a ‘gut feeling’ about it. So, as is my wont in such situations, I put the photo and specs in a file called “MJM Maybes” just in case evidence might pop up in the future. Such is now the case with this 15.5″ necklace which is composed entirely of these ornately embossed oval links measuring almost an inch from top to bottom. The clasp is a standard spring ring which was no help in identification, and although the exact same blue glass stone insert is seen adorning a tailored bow in my Trio of Discoveries post, that’s no proof either. So what was the ultimate identification connection? 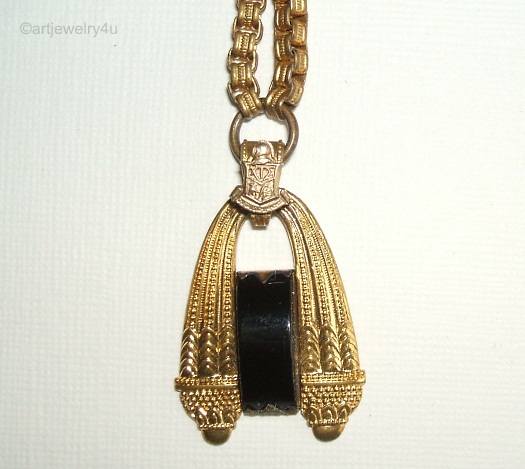 This necklace and bracelet, while not identical as in other MJM pairs, nevertheless clearly connects two previously discovered designs. The pendant necklace – which some may consider to be Egyptian Revival style but to my eyes looks Sumerian or Phoenician – was shown with green-and-white accents just a few months ago (Janury 2017 update post) and is definitely theirs. In this set the ribbed metal section is occupied by a black glass stone; their typical large box chain is 16″ long and the pendant is 1″ x 1.25″. The bracelet links are identical to the silvertone blue-stone-insert choker above, but here done in brass as a companion piece to the necklace; logical, because neither the box chain nor the pendant would make sense as a bracelet.

However, there’s something else pointing to a single source for these two pieces: Both have been ‘customized’ with a sorority badge added: atop the bail of the pendant and across one link of the bracelet. According to the seller it appears to say “Chi Tau Sigma MCMX”. Google could find no extant sorority named Chi Tau Sigma, and the translation of the Latin numerals comes out to be 1910 ….too early for that to be the date of manufacture for this set. A more likely explanation is that the sorority itself was founded in 1910. It would be interesting to find out whether the sorority contracted with the Mystery Jewelry Maker to produce these sets for them, or whether the sets were purchased at retail and the badges added after the fact by a local jeweler.  The bracelet is 6″ long and as mentioned for the choker the links are 7/8″ high. On the back of the bracelet’s stone setting a name has been scratched into the metal; it looks like either “G Caser” or possibly “Casey.”

If anyone has information about a Chi Tau Sigma sorority that existed between 1910 and the 1930s or 1940s, I’d be very interested to know where the chapter was located; it may well give a clue to the location of our Mystery Jewelry Manufacturer if the college or university was in the same area.

Here’s the same pendant again but this time with a ribbed green glass stone in the center. The chain is unfamiliar but the photo isn’t sharp enough to be certain; it’s narrower than their snake chain but not their lozenge chain either. It could also be a replacement.

It wouldn’t be right to end a springtime blog post without some flowers, would it? And these are not only “new MJM flowers”, they are the very first dimensional ones that I’ve seen from them. My intuition tells me that this necklace is probably of similar production age as the “soft bow” necklace shown above. The very shiny, almost pinkish or coppery-gold plating also coincides with a few other somewhat-atypical designs I’ve come across.

This crossover design is the first of its kind I’ve seen, using two lengths of their watchband-style flat chain with their usual box clasp and pointed opposite ends. My guess is that the four flowers are attached to a round base that is attached to one of the chain ends via tabs (the usual method for a center station on their flat chains) and then the other chain is overlapped and spot welded. Length was given as 17″ (I assume this means to the pointed ends) and the chain width as 3/8″; the floral element is 1.5″ wide. I would not be at all surprised to someday find one of these in the silvertone finish as well.