….baby tree peonies, that is! Which only goes to prove a bunch of old gardening adages about not giving up on Mother Nature, I suppose… at least where tree peonies are concerned, anyhow.

Almost two years ago I ordered some P. rockii seeds from Cricket Hill Nursery in Connecticut. Because I’m house-hunting, my intent was to grow them in pots until such time as I have a new garden to put them in. In any case, the existence of the Mysterious Alien Fungi in the front-yard beds here makes me feel uneasy about moving anything from Here to the as-yet-undiscovered There.

I carefully followed Cricket Hill’s detailed instructions about how to germinate the seeds in the special bags they were shipped in, a process which they advise can take anywhere from a few weeks to a couple of months. Unfortunately, the seeds remained stubbornly dormant; horticulturally speaking, the only result was (if you’ll forgive the irresistible pun) ‘crickets.’ Not the tiniest indication of root filaments to be seen.

After almost a year had passed, and after pulling out some convolvulus that had succumbed to summer heat and drought, I plunked the ten tree peony seeds into the resulting bare patch next to the back patio in a fit of pique, watered them in, and told them to “sink or swim.” Assuming that nothing would result, I promptly forgot all about them.

Fast forward to last weekend (which ironically was Mothers’ Day) as I was finally getting around to doing my neglected Fall 2016 cleanup here and there, I happened to glance at the area which was now festooned with creeping phlox, a couple of iberis, and bearded iris foliage. It crossed my mind that maybe I should scatter some blue nigella seed in that empty spot. 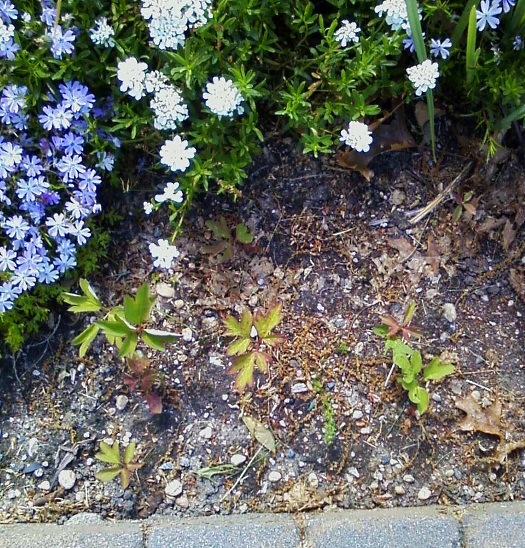 Except that it wasn’t entirely empty anymore.

My first thought was “those are odd looking weed seedlings” and my second was “they almost look as though they’re in line with one another.” Then I had a sudden flashback to having done something with those tree peony seeds… and the shape of those second sets of leaflets does rather look like…hmmmm. 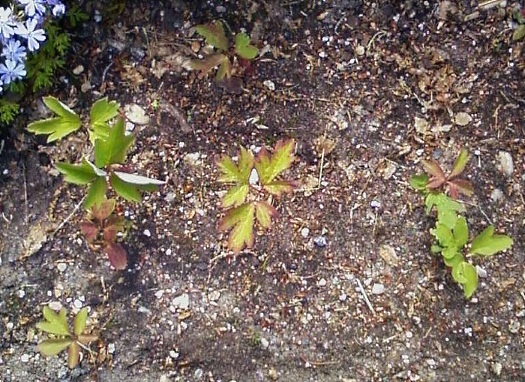 A quick check online confirmed that yes, I had become “stepmother” to seven (possibly eight, but I’m not at all sure about the one in the upper right corner) baby tree peonies.

It reminded me of one of my favorite passages in one of Beverley Nichols’ books, where he describes smuggling back a pocketful of cypress seeds from a vacation trip to the Mediterranean. He carefully sowed them in a box of fine soil and hid the box under a greenhouse bench to keep them away from the prying eyes of his resident gardener, Oldfield. He eventually forgot about them until almost two years later when he happened upon the box, opened it, and “twenty baby cypresses got up and bowed.”

Well, my baby tree peonies didn’t bow but the overall effect on me was the same. 🙂

Just like any new mom I instantly began to panic over the welfare of my ‘kids’, because they were not situated in an ideal location. For one thing that spot is in full blazing sun all day, which would be compounded by the heat reflecting off the adjacent brick patio. The poor things would probably burn to a crisp in July and August. However, they were far too “young” to be moved; peony seedlings aren’t ready for that until September. Worse yet, the forecast for the next few days was probable record-breaking unseasonable temps topping 90F.  I had to figure out some partial shade solution, and fast!

Rigging up some kind of shade cloth would be a pain unless it could be easily removed for weeding purposes. I envisioned some sort of four-legged wood frame upon which I could attach a piece of aluminum window screen across the top, as long as it would be heavy enough not to blow away. Alas, no such thing is ready-made, and Charlie the Carpenter I am definitely not, nor do I know any such people. So I began scouring the local stores for something similar.

One garden supply store had an 18″x24″ rectangular wire grow-through plant support (think ‘peony cage’ but a rectangle instead of round) supported by four 2-foot-long wire stakes, for $10.99. It was a bit flimsy but I figured that the legs would anchor it well enough. I didn’t realize just how flimsy it really was, and also discovered that it was almost impossible to get all four wire stakes into the ground without two or more hitting an obstruction of some sort (probably leftover bricks or cement from the patio construction.) The top never came even close to being remotely level. So that was a waste of time and money. 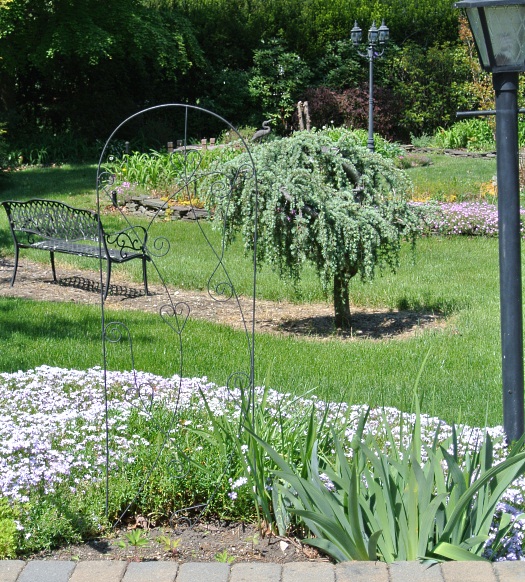 My next thought was a vertical screen that would shield the seedlings from the afternoon solar blast without getting in the way of either watering or weeding. I had a trellis brought from my last garden, so hauled it out, set it in place (miraculously without hitting any buried obstructions), and was dismayed at how easily it swayed wildly from the slightest touch. If I attached any kind of fabric screen on it, the result would be a sail in even a moderately high wind and the whole thing would be likely to fall over and squash the delicate babes flat. Back to the drawing board.

There followed a trip to Lowes, Home Depot, the local hardware store, etc , in search of a trellis that would be a bit sturdier, a bit shorter, and perhaps less “open.” There were none, but what I did find (at Lowes) was a single-panel white PVC lattice screen section intended to hide boring things like air conditioning compressors, trash cans, and so forth. Might this provide “dappled shade” in the afternoons? It was definitely sturdy and boasted two serious-looking aluminum ground stakes. Price, $26.98 …. a bit hefty for a big piece of plastic but if it worked… 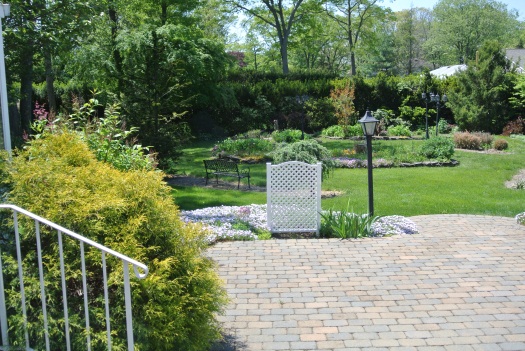 Amazingly, it did, with barely even a wobble. Didn’t even hit any rocks on the way in, either. I did rip out some phlox and iberis but hey, when you’re decorating a baby’s room there are always some sacrifices, right? Yes, it’s ridiculously blindingly white and intrudes bluntly on the view from the kitchen window (shown here), but it serves the necessary purpose. 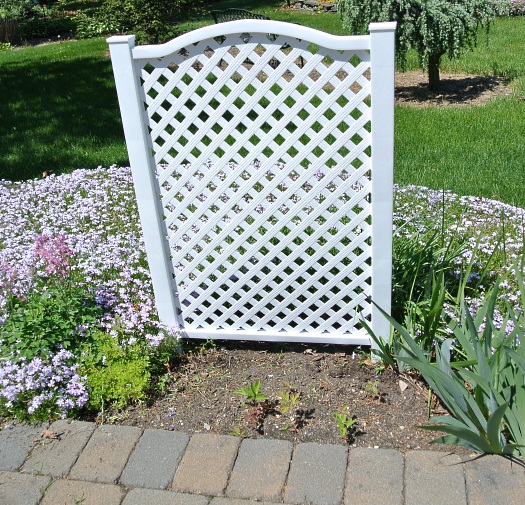 From dawn until midday the seedlings are in full sun, because the patio is very deep and so the house itself casts no shade. 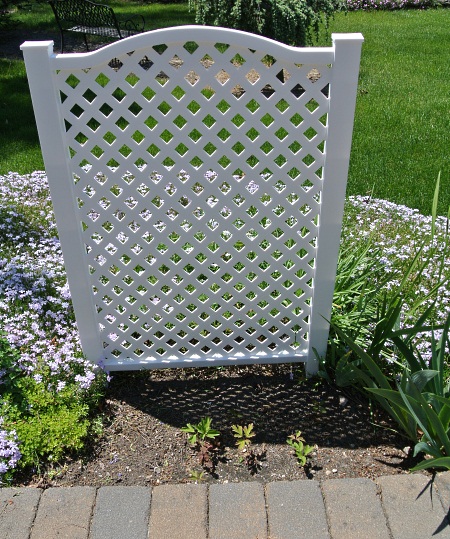 This is the shade cast at about 1 pm. 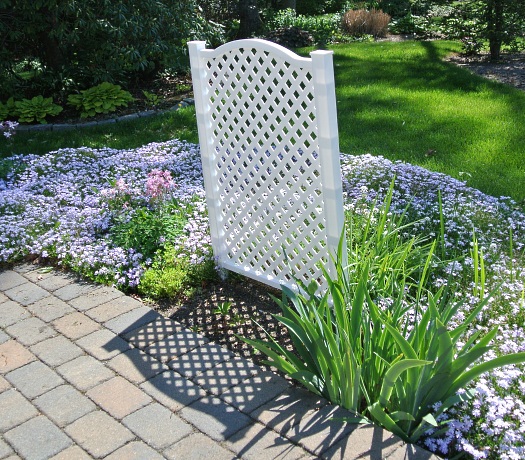 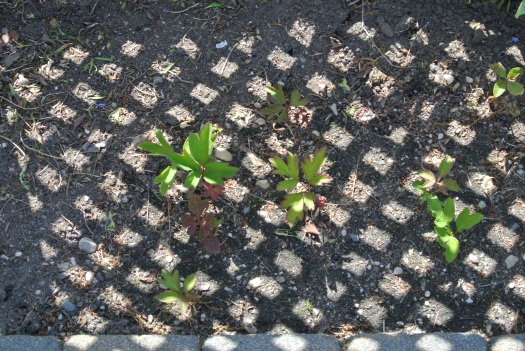 By 2:30 pm the entire section is shaded. By 5 pm the sun has lowered enough so that more than half of the bed is in complete shade; I will have to keep an eye on this and if the seedlings start to lean toward the east, I may have to make some adjustments.

My next step was to find the proper “baby food” which, again according to Cricket Hill, is ideally Neptune’s Harvest fish-and-seaweed liquid fertilizer applied every other month from April to September. Obviously we’ve blown past April already, so this coming week will be Feeding #1, followed by Feeding #2 in July and Feeding #3 in September… at which time the next dilemma will arise because I cannot leave the seedlings where they are. But what to pot them up in?!?!??

This is Cricket Hill’s webpage specifically on the topic of growing tree peonies from seed. Yes, I do notice that it says not to give up on germination until 2 years have passed, LOL. Which just goes to show that it always pays to read the fine print!

4 comments for “Unexpectedly, I’m Now the Stepmother of Seven….”