Last week I noticed that my baby tree peonies were coming close to nudging the top third of my horizontal chickenwire cloche, so it was clearly time to think about switching to a vertical orientation. But in that aspect the bottom section would no longer cover the two outlying seedlings on the righthand side. How to protect those? What I needed was a cylindrical wire ‘cage’ with about a 6″-8″ diameter footprint.

Thinking outside the box, I thought perhaps craft stores might have something. We have several in our area but a visit to Michael’s, Jo-Ann, and Hobby Lobby yielded nothing suitable. However, at the fourth and last choice, A.C. Moore, I hit the jackpot: a wire “storage basket” and marked down to $5.99 as well.

The revised protection setup is more than adequate for the next few months until potting-up time (and also gives the “kids” some heights to aspire to!) 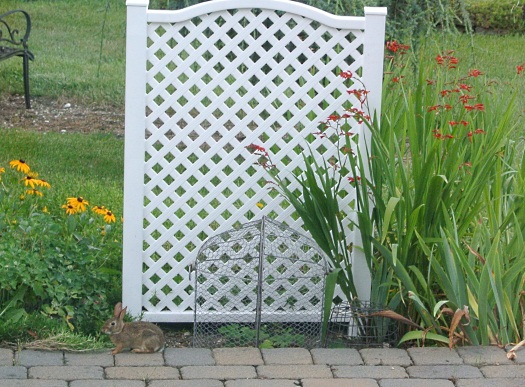 The next day I happened to look out of my kitchen sink window and saw the same young rabbit – who has been named Rodney, for no particular reason other than he just looks like a Rodney – lunching on some wayward creeping sedum that I’d pulled out of the way of the peony area. I felt smug, knowing that he couldn’t chow down on my precious little seedlings. My camera was on the kitchen able, so I grabbed it. 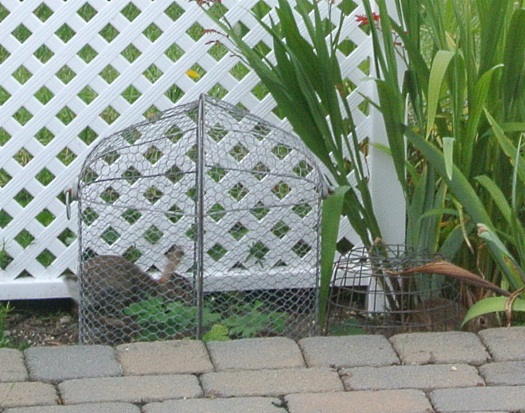 Seemingly out of nowhere a large adult rabbit suddenly dashed up from the left, causing Rodney to literally turn tail and skitter behind the peony cloches. I expected the big bully to then turn his attention to the creeping sedum. It was a hot day, so their juicy leaves were probably quite an attraction. 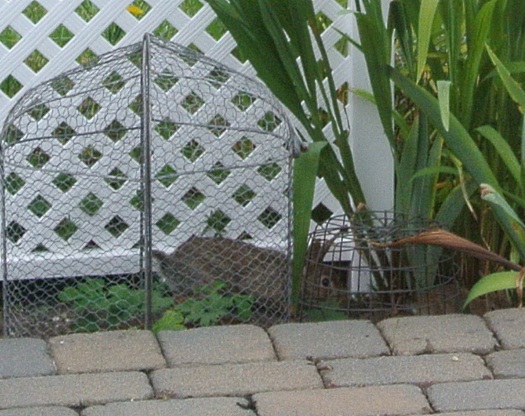 Upon which Rodney burst out, did an admirable U-turn on the patio bricks and circled around behind the large cloche. At this point I was more grateful for those cloches than ever, because the seedlings would probably have been flattened by all this traffic if they weren’t securely fastened in place. 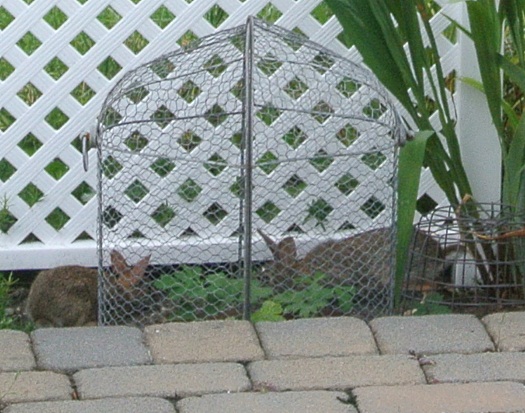 I couldn’t believe that these two were facing off again, now with their positions reversed. (Rodney must be either very brave or very foolish.) This could easily turn ugly. I assume that adult rabbits must sometimes fight – though I’ve never seen it – but do adults actually see youngsters as a threat?

“He who bluffs and runs away, lives to bluff another day.” Wise move, Rodney! With Big Bully in hot pursuit, he dashed under a large adjacent chamaecyparis and both were lost to view. I feared the worst…

Now, you would think that Big Bully would eventually emerge victorious and sit down to a nice sedum salad, right?

Nope. Amazingly, it was Rodney who came out about two minutes later and then performed an almost catlike display of face-rubbing (front paws) and head and ear scratching (back feet.) He seemed none the worse for wear, and Big Bully was nowhere to be seen. 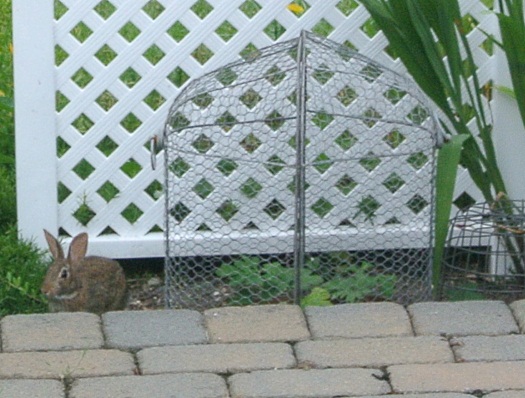 Having restored himself to sartorial splendor, he strolled over to the peony cloches, parked his little furry butt and cotton tail comfortably in the soil, and resumed his rudely interrupted repast. Gotta give the little guy credit!

4 thoughts on “An Ounce of Prevention, and a Garden Mini-Drama”