Once in a great while I come across one of the Mystery Jewelry Maker’s findings that another manufacturer has either adapted or resurrected decades later. The best example is their large bow which was picked up by the Forstner Jewelry Company and made into a sterling silver brooch. Some alternate versions of the smaller MJM bow ‘blank’ are shown in my Lookalike Bows by Guyot post, but none of these were exactly the same stampings as the MJM used.

However, I recently came across a sterling silver copy of the MJM’s “nouveau bow” finding. This bow was used by the Lucy Isaacs Jewelry Company which was based in midtown New York City from the late 1960s until the early 2000s. 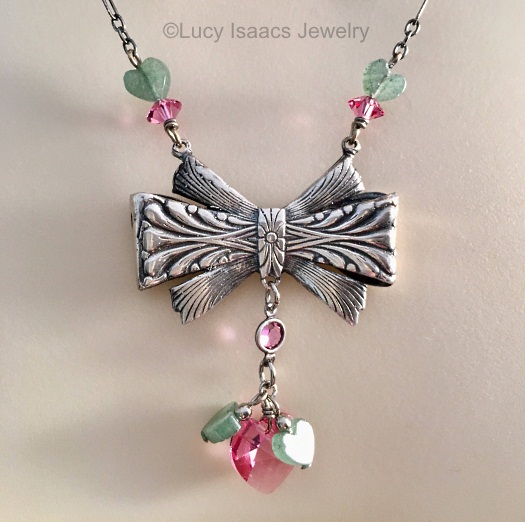 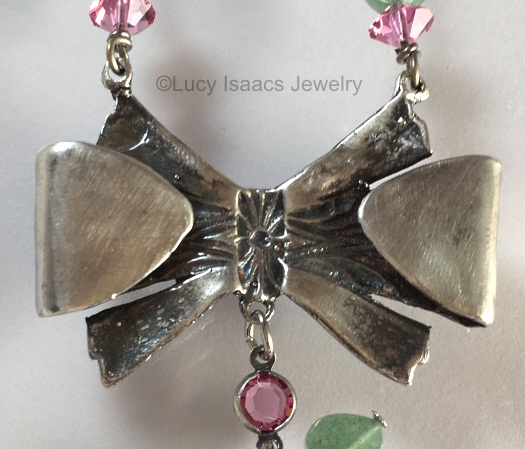 While doing my usual twice-weekly scan of internet selling venues for examples of MJM jewelry, I discovered this Lucy Isaacs necklace for sale on Etsy. The bow element is indeed the MJM nouveau bow in its normal size which is 2″ across, cast in sterling silver instead of brass, and is the focal point of a dainty necklace that includes heart motifs in green aventurine and pink Swarovski crystal. As seen in the second photo, the bow even has the “wraparound sides” typical of the MJM’s small bows. The only slight difference between this bow and the original 1930s MJM version is that there is a bit more space than usual between the main bow section and the upper and lower (stripe-y) ones; a minor quibble. So how did a MJM nouveau bow end up as part of this modern necklace?

Lucy Isaacs was a designer who incorporated a mixture of vintage and modern elements into her signature jewelry creations. Findings commonly included vintage glass beads (often Czechoslovakian), Swarovski crystals, semiprecious stones, and sterling silver elements. These were combined and assembled to create necklaces, bracelets, and earrings in her signature style. Occasionally Ms. Isaacs would make “lost wax” castings of unusual vintage findings in order to have them in sterling silver rather than their original brass or base metal. It appears that this was the case with the Mystery Jewelry Maker’s nouveau-style bow.

In the early 2000s, after closing her Manhattan location, Ms. Isaacs sold the company and all of its remaining (and extensive) physical inventory of vintage findings and finished pieces to Lauren Campbell-Reichert, a longtime friend and associate, who is continuing the original brand via her Etsy shop, Lucy Isaacs Jewelry.

Unfortunately, Lauren and I have been unable to discover exactly whether or when Ms. Isaacs made a sterling casting of the MJM bow or where she obtained the original brass version. It may well have been taken from a complete or partial piece of actual 1930s Mystery Maker jewelry. The bow’s design patent (if one was ever applied for) would have long expired by the 1970s and so there was no reason why Ms. Isaacs shouldn’t have created a silver copy of it.

This bow does seem to have been the only MJM element that appeared in Lucy Isaacs’ design history. There’s no way to know how many (if more than one or two) times this bow was incorporated into a Lucy Isaacs piece, other than that it had to have been after 1968 which was when that company was founded. But if nothing else, it proves that the Mystery Maker’s design components have stood the test of time!

(Many thanks to Lauren Campbell-Reichert for permission to use her photographs of the Lucy Isaacs necklace featuring the MJM’s nouveau bow. Additional photos and details can be seen in the item’s listing in her Lucy Isaacs Jewelry shop on Etsy.)