As promised, here’s a selection of newfound designs and colorways added to my 1930s MJM (mystery jewelry maker) database. There’s also an anomaly which possibly may have been produced by them as a sample piece, or by another company either as a knockoff or later ‘pickup.’ It will be examined last. 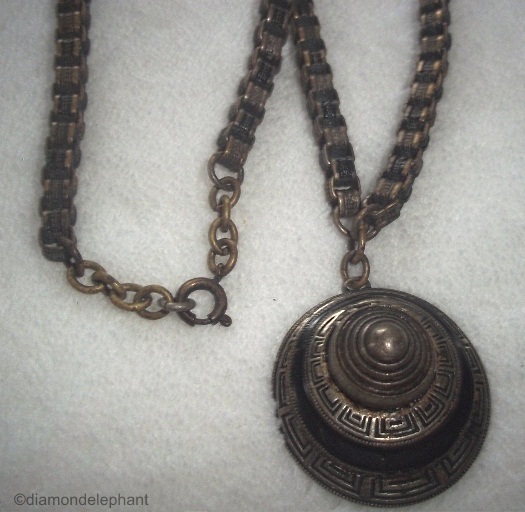 I’ll start off with a new colorway of the dome-on-box-chain necklace previously seen in green/black (in Part Two) and in blue/black (in Midsummer 2015 Roundup). This version uses black only, making it a match for their black-on-brass large bow necklace that is also shown in Part Two. The dome is 1.25″ in diameter. Although the clasp is original, the extra links must have been added by a prior owner to make the necklace longer. 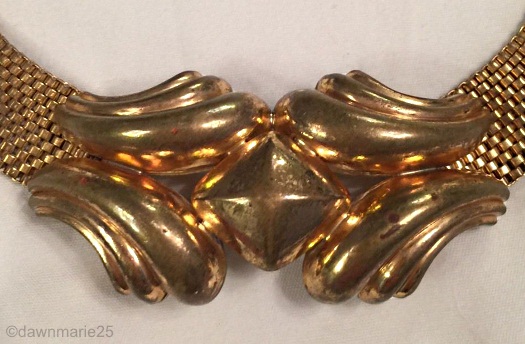 This necklace is the first of two newfound designs; I was rather taken aback by the size of the center station, which is 2.5″ wide and 1.5″ high – unusually large, especially for them. It’s definitely their box clasp as well as their 11-row, 5/8″ wide flat mesh chain. Cited as being 15″ long overall, I imagine that on most necks the center station must tilt forward a bit, at least.

It was produced in silvertone plating as well. My guess is that this was one of their later offerings because I feel it leans more toward the early 1940s in that center station design. These also seem to have the brighter plating finish often seen on their minimal- or no-painting designs. Compare the finish on the brass one to that of the dome necklace above, for instance; this one is noticeably brighter, more of a goldtone than a natural brass. 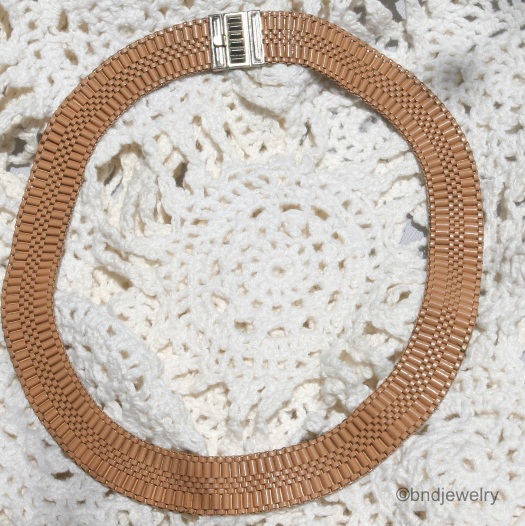 This mocha/tan watchband style mesh choker is a sibling of the salmon pink one found in The Mystery Jewelry Maker Returns. This tan color is also found on their tubular mesh and small box chains paired with their medium and/or chocolate brown paint. It is 16″ long.

Although this cutout small bow may seem the same, at first glance, as the one appearing on a mesh bracelet in A Trio of Discoveries, it is not.

A detail-shot comparison reveals that they are, in fact, different castings. This new (blue bracelet) bow is the first I’ve seen of this second version, and it has been duly added to the Index thumbnail gallery as “cutout bow style B.”  Like all their flat mesh bracelets this one is 7″ long.

This is the third colorway of one of the MJM’s patterned mesh necklaces; the other two (one red, one green) are shown in my first Patterned Enamel Mesh Necklaces post. Both of those have silvertone finishes but this one is brass. It’s difficult to tell from these photos whether the pattern paint color is black, or a very dark brown. I’m likewise uncertain of the mesh color; it’s definitely darker than the brass box clasp, and may well be their ‘coppertone’ plated mesh which I’ve found only once before.  Or perhaps the mesh is painted. The overall effect is black on orange, at least in these photographs. Length is 15″ and 3/8″ width. 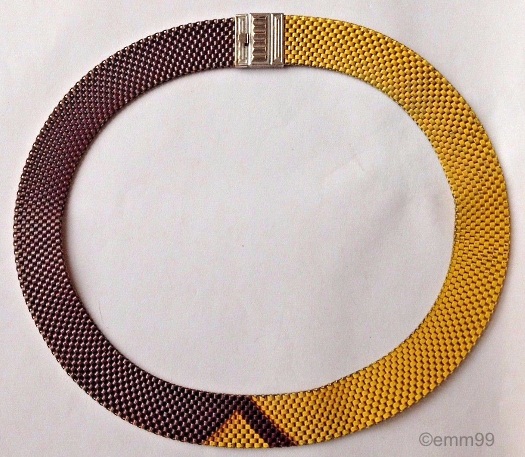 There’s no uncertainty at all about this colorway! The other example in my database is a “night and day” version in black and white, seen in the first Patterned Mesh post. It is 16″ long and 5/8″ wide.

A new entry into the nubbly-bow-on-small-box-chain collection, this time in deep cherry red on silvertone with two bright white accents. In excellent condition too.

This is only the second time I’ve found their “tailored” small bow on a bracelet. Sadly, the decades have not been kind to this one. The detail photo shows that the bow was once neatly accented in black paint, though the dark shadings on the woven flat mesh chain are probably just oxidation and verdigris rather than a faded paint pattern. I’m surprised at the pointed ends/thumbring clasp on this; although I’ve seen the same on a few necklaces, the flat chain bracelets were more suited to the box clasp as on the blue cutout bow one above.

If, or When?? An Odd-Couple Front Clasp Necklace

Well, here’s my anomaly and I still can’t decide which side of the fence (MJM or not-MJM) that I’m perched on. 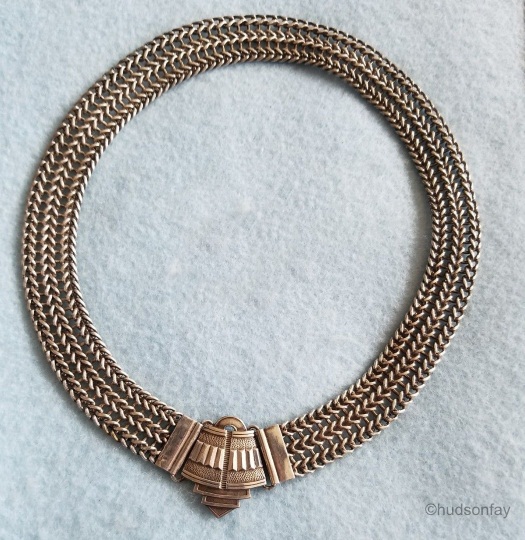 Obviously this is the MJM’s “ribbed architectural” front clasp. No doubt about that, because I’ve seen it on six different patterned mesh necklaces so far. And that’s the problem: ALL of their front-clasp necklaces have invariably been on either their 3/8″ or 5/8″ flat mesh chain. Every. Single. One.

Except this. Plus, I’ve never even seen this “triple herringbone mesh” (?) chain on any MJM piece before!  It is completely, utterly different from anything I’ve found of theirs – which isn’t to say that it doesn’t look good or interesting. In fact I think it does, and is.

The brass is also a perfect match for the front clasp, something that’s not always a given. 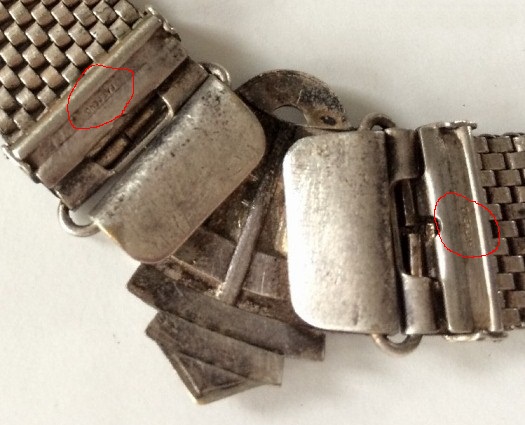 There’s another problem. On ALL of my other front-clasp examples, the two clasp parts are stamped Pat.Pend. on the back, just like this photo shows.

Except, of course (as per Murphy’s Law), this newfound one. *sigh* And to make it worse, although the side pieces (connecting the clasp to the chain) of all the other discovered MJM front clasps are stamped with a design….on this clasp they are plain. *headdesk*

So this presents me with three competing theories. (1) This may have been an early piece by the MJM, before they (or whoever actually made these front clasps if it wasn’t them) applied for the utility patent; or (2) Somebody in the foundry or finishing shop forgot to add the Pat.Pend. to this clasp; Monday morning hangover, whatever. Or (3) this was made by a different company, using a copy of the Patent-Pending front clasp paired with their own chain.

I’m leaning toward theory #1 or #2, especially if – and admittedly it’s a big if – this was the very first front-clasp design/motif that was produced. The MJM may have produced a small run to test the waters, gauging what reception these got from their customers before moving ahead with anything else.  I am still stumped about the triple herringbone mesh chain though. It’s a bit unusual, and looks like it’d be very comfortable to wear, as well. Good design.

All of which leaves me with a “definite maybe” as to whether this was a Mystery Jewelry Maker piece or not. I’d like to find a silvertone version (or an additional brass one) with this same chain, to see if that clasp has the Pat.Pend on it or not. For that matter, I’d like to find anything else using this identical chain but so far, no luck.

That rounds out the latest MJM update on this chilly winter’s day, as I’m closing in on a milestone of 200 (!) different illustrations of the 1930s Mystery Jewelry Maker’s work. With a little luck, the next instalment will cross that threshold. 🙂