Our hot humid weather stands in stark contrast to the glacial pace of my attempts to move forward on the renovation work needed in both house and garden. It’s not for lack of trying; the first hurdle is getting estimates, but the worst hurdle is actually getting the work done. I’ve accepted the fact that in July and August I can’t do anything outdoors except stand in one place for five minutes and watch the sweat drip down my hair and onto my shoulders. As the saying goes, it’s not the heat so much as the humidity – and both have been brutal lately.

On June 21st the poison ivy and invasive weeds were treated, and on June 23rd I began calling companies for estimates to rip out the contents of the several infested planting beds as well as the pestiferous Rose of Sharon (the poison ivy company does not do that work.) On July 9th I settled on one of them and signed the work order; I was told that the work would probably be done “toward the end of the month.” They finally arrived on August 16th but it took several phone calls plus an in-person visit to their office to accomplish it. Here are a few Before and After photos. 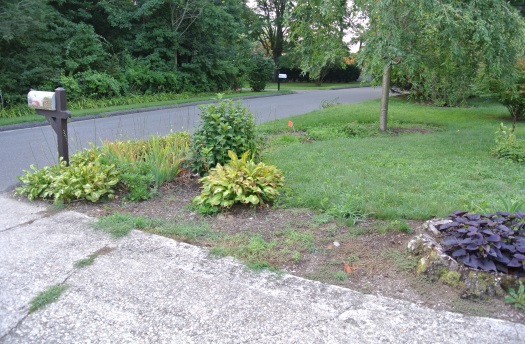 I call this the Mailbox Bed for obvious reasons but it should really be named the Poison Ivy Breeding Ground because I kept finding more and more plants of it popping up even after the June treatment. This bed used to be shaded by the oak whose stump is now hosting the black sweet potato vine but now it fries in full sun all day. The only reason the hostas and hydrangea aren’t dying of thirst is that we’ve had intermittent thunderstorms last week. My gut told me that the only way to eradicate the poison ivy threat (it is also in the “grass” nearby, despite mowing) would be to rip everything out. 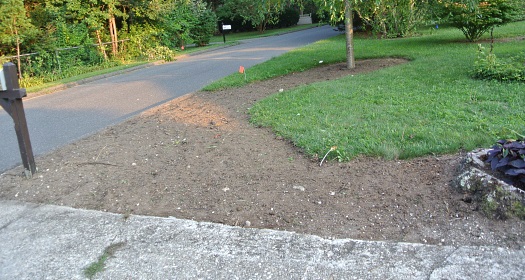 Except for the weeping cherry, of course. Eventually this will have great potential but not until the driveway is torn out and replaced next year. Plus at least a year of constant vigilance for the return of the poison ivy. 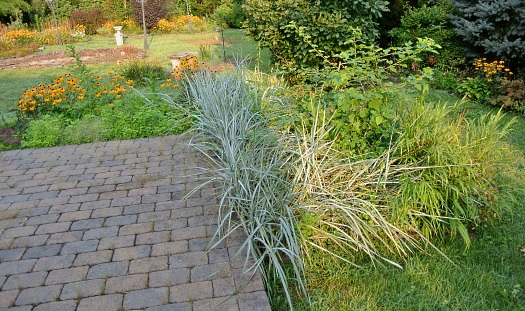 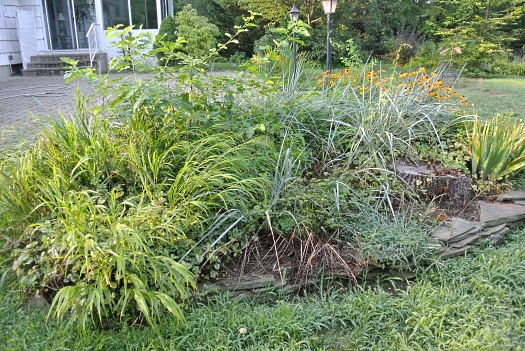 The lyme grass and yellow archangel had made this bed hopeless even before the poison ivy, bittersweet, and Virginia creeper invaded it. When I bought the house there was a nice little Japanese maple in here and some pretty phlox; the maple was later split in two by an ice storm, and the phlox became loaded with P.I. Honestly I have hated the sight of this out-of-control bed for almost two years. 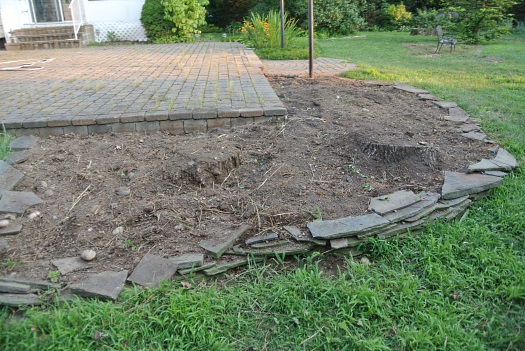 Finally, all gone … but I will have to spend at least two seasons nuking it with herbicide before daring to plant anything new in it. By the way I loathe the bluestone “raised bed walls” the prior owners put in. They are simply stacked in place loosely, which means grass and everything else invades it and it’s constantly falling apart. I wish I could afford to replace it with something solid, but there’s no financial way. ☹ 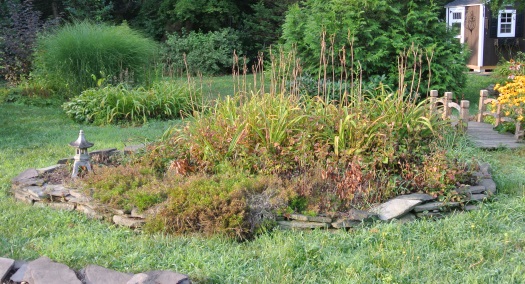 The Lantern Bed’s problem wasn’t poison ivy (that I had found, anyhow) but being completely overrun with houttonyia, mugwort, and tawny daylilies. 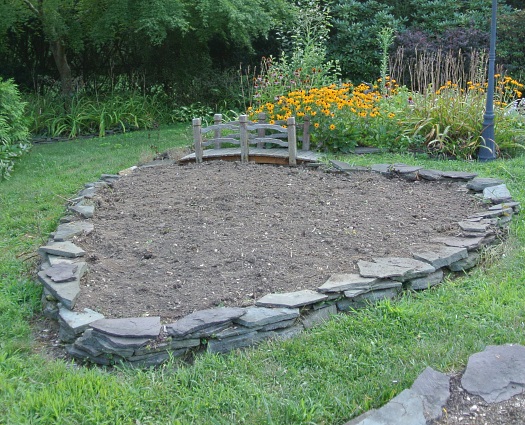 At least I’ll have a shot at replanting this area in the spring. After the day’s work was done, I regretted that I didn’t tell them to rip out the bed behind it as well, because I noticed the houttonyia had snuck in there while I wasn’t looking. Damn. 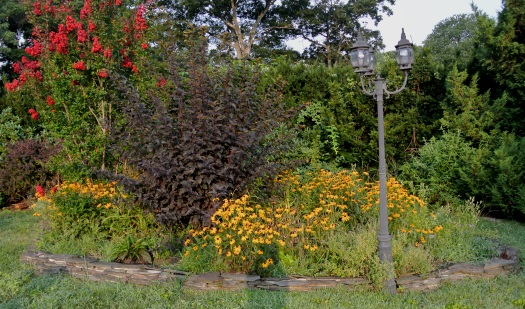 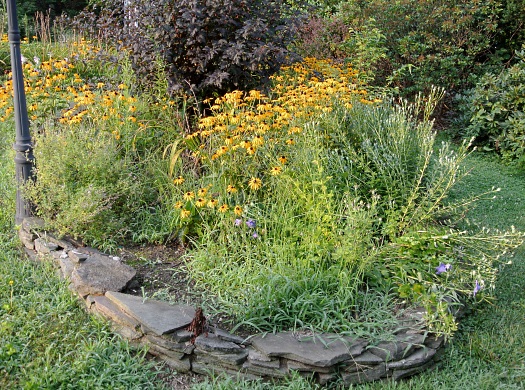 I had been calling this P.I-infested bed the Ninebark Bed. I’d been (until I discovered the P.I. in it this May) hacking it back to about 2.5 ft every March because otherwise it totally blocked my view of the very nice rhododendrons behind it. The blue are some platycodons, and there was some ajuga here and there before the crabgrass smothered it. Otherwise, nothing but tawny daylilies, tiger lilies, rudbeckia, and weeds. 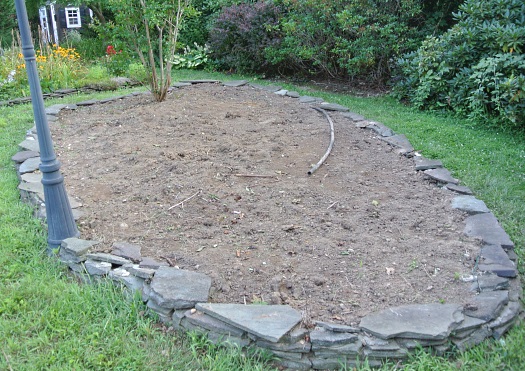 Now it is the Crape Myrtle Bed. The flowers are an extremely nice true clear candy-apple red. But I can’t believe they left the remnants of the old sprinkler system just sitting there. Oh well. 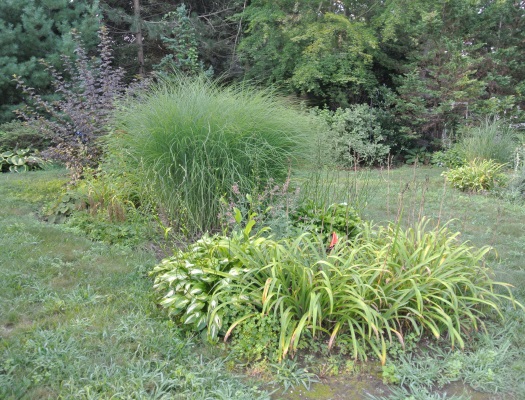 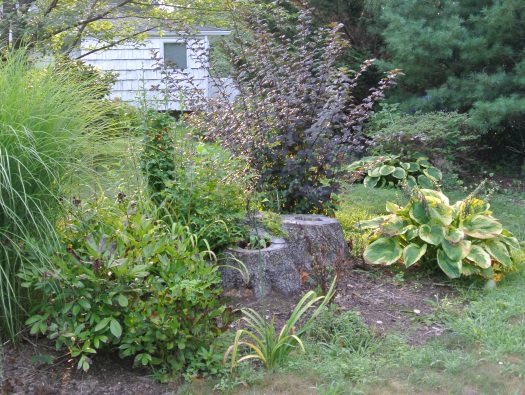 Originally I planned to turn this double oak stump into a “fairy condo” because I think my granddaughter might like it. What you can’t see much of in these photos are the Rose of Sharon (large, medium, and small) taking over the other side and the zillions of seedlings in the grassy areas surrounding it. The orange flag marks more poison ivy in the tawny dayliles. There were some heucheras and astilbes here that were nice before the P.I. reached ‘em. 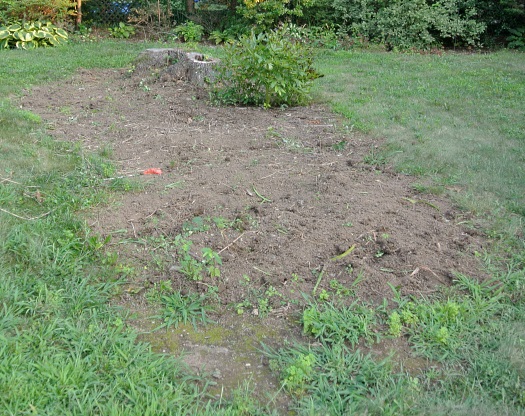 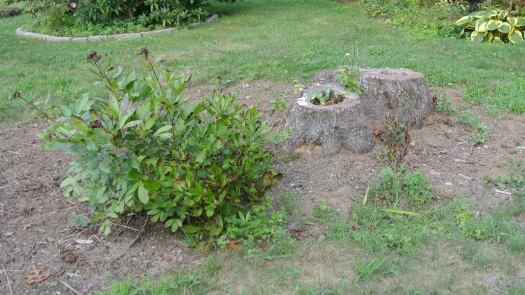 I told them to leave the peony. I did not tell them to leave the surrounding weeds and the rose of sharon that seeded itself into the trunk. Hopefully some brush killer will take care of that. I do have hopes for turning this into the “condo” eventually. Good thing I have a few years’ lead time for that (granddaughter is not even two months old yet)! 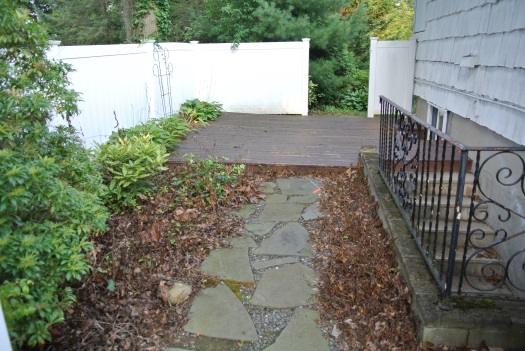 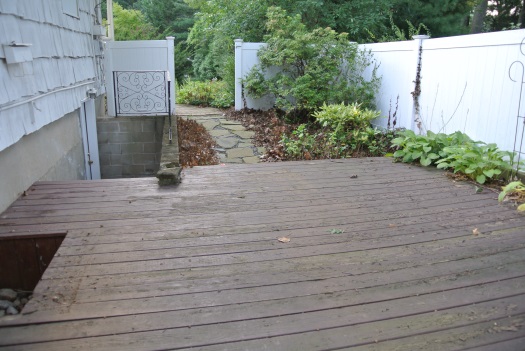 Okay, well, this what I laughably called the Courtyard because when the prior owners had tenants in the (now gutted) basement, they had a table and chairs here. The DIY window cutout was open and so it (and the deck, and the bottom of the stairwell) collected quantities of leaves and acorns from the neighbor’s ginormous oak on the other side of the fence. Poison ivy had appeared everywhere; this photo was taken six weeks after most but not all of it had been nuked. The only decent things were the pieris and the aucuba, so I told the men to leave both of those but rip everything else out. The wood, as you can see, was not in good shape and I am pretty sure that rodents were finding a cozy home underneath. 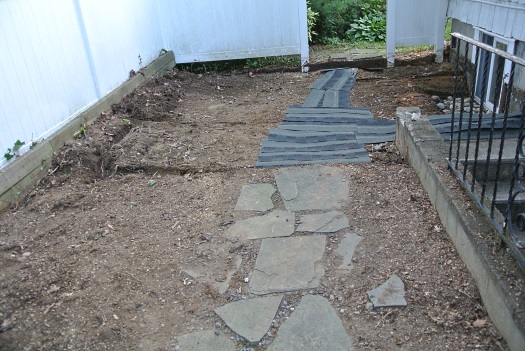 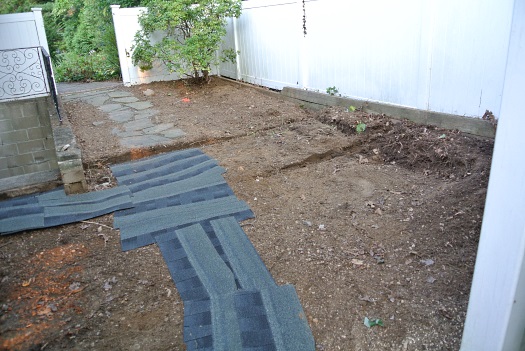 Yeah, it’s a mess. I also had no idea that the area was graded toward the house! No wonder I’m having dampness issues in the basement (though not in that spot, oddly enough.) This is going to be a huge project. Luckily I had some extra/old roofing shingles with which to lay down a dry pathway because I don’t know how long it will be (weeks for sure, possibly months) before I can get anyone to do anything with this area. Still waiting for estimates… I definitely want it all hardscaped except for that one rectangular area where the pieris is, and the aucuba was. 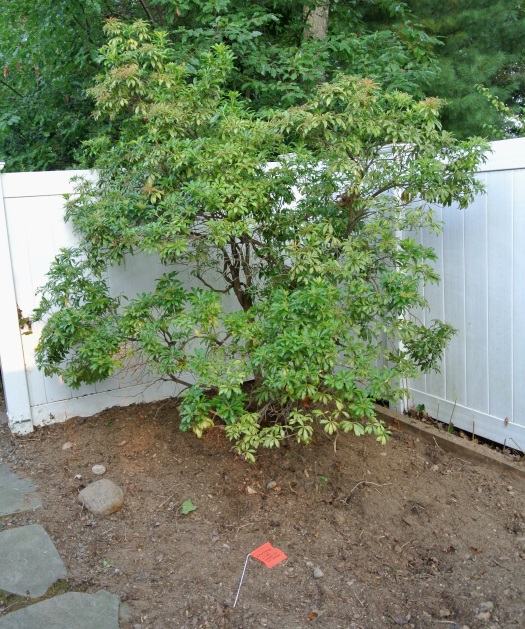 The pieris is actually pretty nice. I expect it will do better now that it has been freed from the strangleholds of the English ivy, bittersweet, and wild raspberry that were threatening to choke it. The house wall faces south but because of the neighbor’s (*$($##@! overhanging oak – which I roundly curse three times a year – and the fencing, the planting bed gets only part sun in the mornings and is almost all shaded in the afternoon after the oak leafs out. This would be a good spot for some azaleas, hostas, and epimediums eventually. It’s basically just a pass-through from front to back but could be made into something attractive eventually…. despite the damn oak. 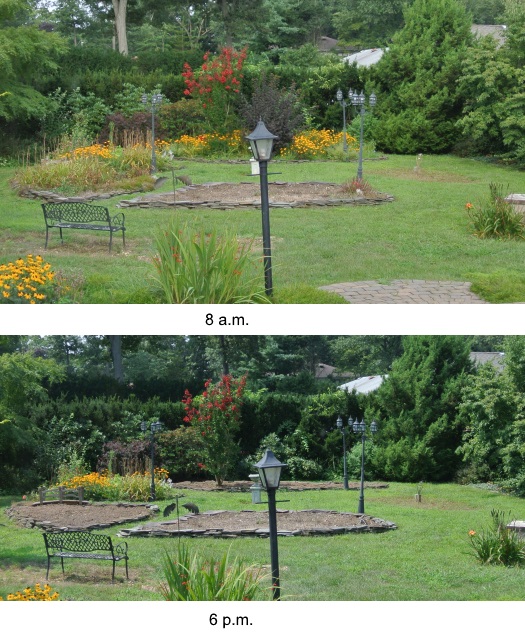 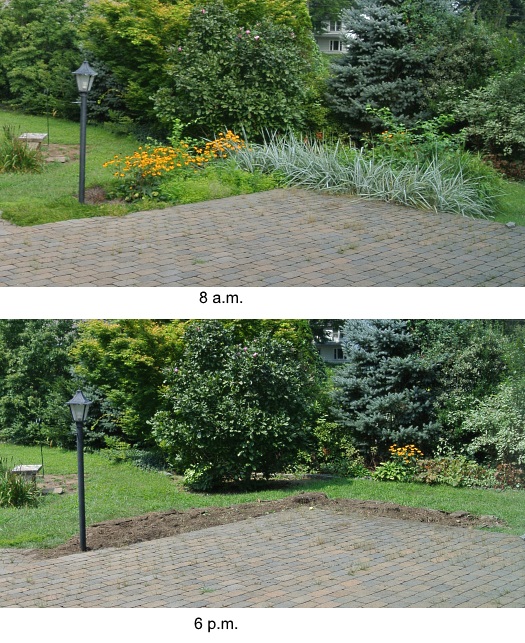 Before-and-after views from the kitchen window. I cleared out the bed in the center this spring; there was no P.I. in it but it was loaded with mugwort and some houttonyia. I have to keep spraying it with RoundUp every 3 weeks because those two miseries just will NOT give up and die.

The cost for ripping out these areas, plus digging out some additional rose of Sharon, two chamaecyparis that needed to be removed from next to the (leaking, it turns out) greenhouse room because of needed future repairs to the foundation, plus five small conifers along the other side of the front porch, was ugly but there was no way I could do any of this myself. There’s also a staggering amount of additional heavy work to be done: the cesspool installation had to rip up part of the front walkway as well as 2/3 of a planting bed (happily also ripping out another Rose of Sharon, though!) plus grassy areas, so all needs re-grading; an area of the backyard next to the house needs to be re-graded and hardscape installed; and at least four backyard planting beds need to get some kind of edging. Two of those have an electric line (to lamp posts) running through them. And by my estimate last week, approximately 80% of the flat green stuff (I refuse to dignify it with “grass” or “lawn”) in the backyard is crabgrass. I don’t recall it being this bad last year…. *sigh*.

But one step at a time. After posting this, I have to again email the contractor that was here two weeks ago and from whom I have not yet received an estimate for work needed to be done ASAP to the Money Pit itself. I remember thinking to myself, in January, that by now all the renovation work would be completed: the bathroom finished (it isn’t 100%), the porch area redone, the garage interior completed, and the house re-sided. Those last three haven’t been able to be started yet, because my original contractor bailed out after mucking up something on the bathroom job. An October completion, anyone??