During the 1970s the Boehm of Malvern studio produced four categories of collectible porcelain: sculptures, collector plates, one of a kind plaques, and limited edition plaques which are the subject of this post. However, there were far fewer retail plaque designs than plates.

Retail limited edition plaques produced by the Malvern studio during the 1970s were assigned design numbers starting with 600.  However, unlike the sculptures and plates which were almost always made either in Malvern or in Trenton, NJ, the production of these retail plaques was apparently shared: some are marked Made in England and some are marked Made in USA. This results in backstamps that all have a Malvern design code (600-x) but also have the USA logo (horse and feather) …regardless of where a given plaque was actually made according to the “Made in” element. I’ve chosen to put these plaques into the “Malvern” category because of the design code and because so many of them were produced there.

The 600-series limited edition plaques produced between 1971 and 1977 are listed here in design number order. Several additional plaques that don’t follow that design number convention are shown at the end.

We begin with a missing plaque from 1971 which, by all standards of Boehm design numbers, should be #6000. It may be that whatever plaque was given this number ended up never being produced, though it’s odd that Reese Palley’s 1976 book does not mention it. He does cite all sculptures that were given design numbers but never saw the light of retail day. So the plaque with design 6000 is unknown: It may exist, or may not. (Note that on some items the design code decal contains a hyphen, e.g. 600-1 or 600-12, but sometimes not.)

The first known retail limited edition plaque is also the most rare: the Drummer of the Royal Regiment Horse Guards which was given design #6001 and only produced during 1971. Its declared edition size was 50 but only 12 were ever made, because the Royal Insignia was included in the design without first obtaining permission from Buckingham Palace. This was subsequently denied and so the edition had to be cancelled.

The overall (framed) size of all the 1970s plaques was approximately 11” x 14” unless othewise noted. 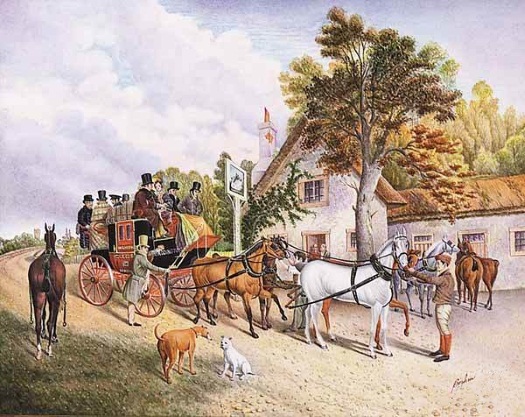 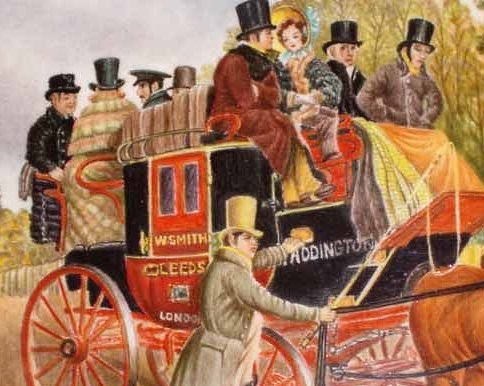 I do not have a good photo of #6003 which is Cockatoo and Flowers. This too was an edition of 50, of the same dimensions and production years as Coach and Four. 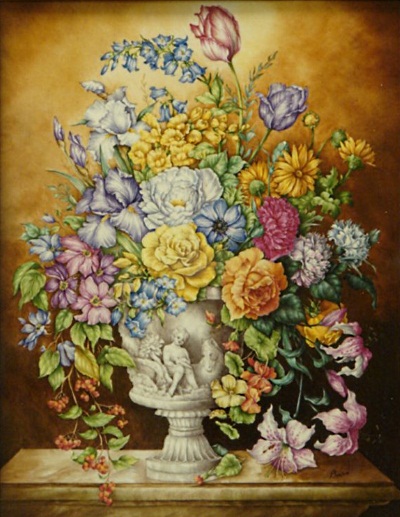 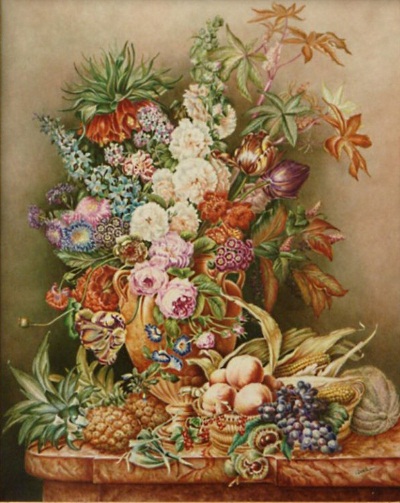 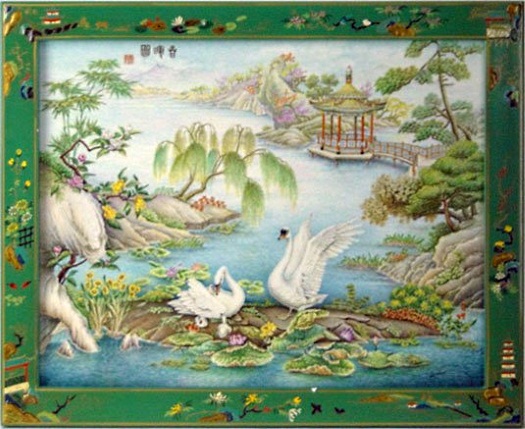 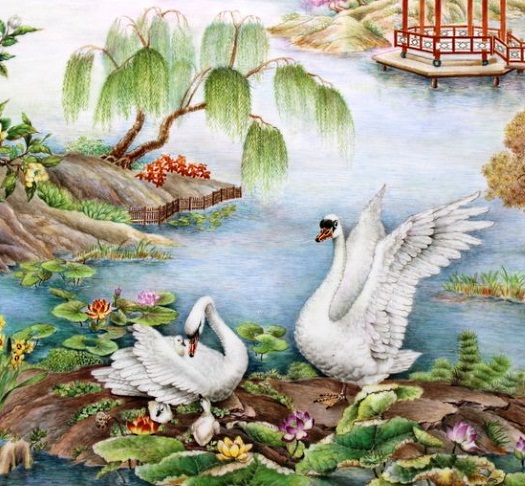 The Glories of Spring (#6006) was an edition of 100 that was begun in 1973 and likely completed its full edition because by 1976 they had already made 82. The decorated frame is also made of porcelain. In this case the original art was by Hsiao Ming-Hsien for the Trenton Boehm studio and some of the early plaques were actually painted by him; others were painted by other Boehm artists such as Paul Beck. 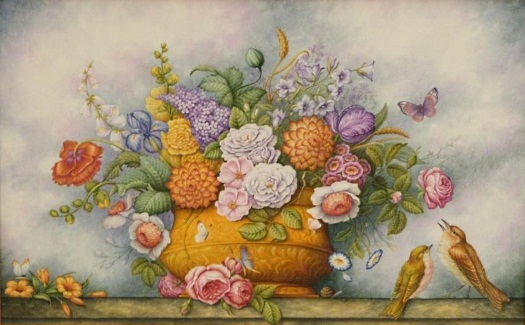 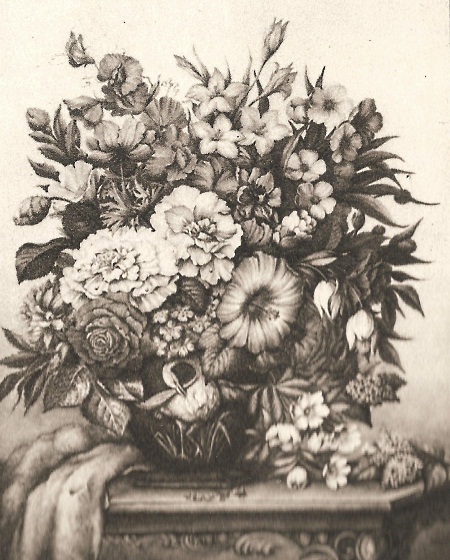 Floral Enameled Crane, design #6008. The declared edition of 30 in 1975 was reduced to 25 in 1976 at which time they had only produced 18; it is possible the final edition size was reduced again before production of this plaque ceased in 1977.  The crane element is in bas-relief and is enameled. This plaque required more than 200 hours of painting time including 15 days of separate color firings. 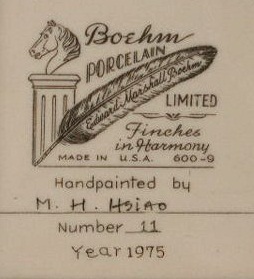 #6009 is Finches in Harmony, an edition of 25 made only in 1975 and 1976. This one was mounted in a handmade wood frame. A number of the earlier-numbered plaques were painted by the original artist, Hsiao Ming-Hsien.

I could not find a good photo of #600-10, the 1975 Venus. It was an edition of 25, five of which were completed the first year. The year of completion is not known. Adapted from the well-known Boucher painting, this was defintely a joint effort of the Malvern and Trenton artists; the first few plaques were made in Trenton. 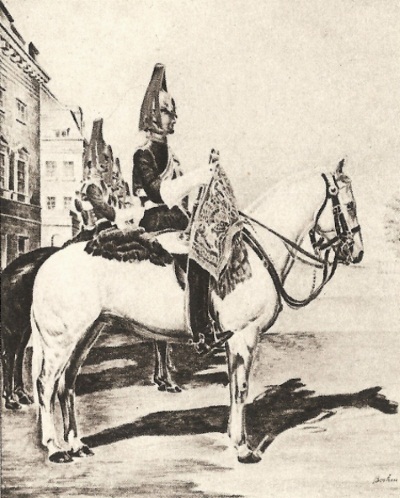 I wish I could find a good photo of Summer’s Beauty, (#600-12) an edition of 25 in 1976. As they did with The Glories of Spring, the painting’s title is said to be shown in Chinese characters and the plaque is surrounded by a floral mat of silk brocade.

Part of Boehm’s “Thirteen Colonies” range in 1976 was the Freedom plaque showing the American Bald Eagle. Not only was its design code appropriate (#600-13) but also the issue size: Only 13 of these were made.

Most of the subsequent plaque designs depart from the prior birds/flowers motif and focus on animals instead.

#600-15 has been found titled as The Ram in some backstamps and as Ram’s Head in others. There seems to be no correlation between the title and where they were painted. There were only 10 made and this was another 1976 release.

The next two plaques are historical in genre and are both also from 1976, which seems to have been a banner year for the issuance of Boehm plaques! Both were editions of only 13 and were clearly meant to be in the same category as the Freedom plaque. #600-16 is a copy of the Gilbert Stuart portrait of George Washington, and #600-17 copies the famous Emanual Leutze painting of Washington Crossing the Delaware. The plaques are titled likewise.

Plaque design #600-22 was an Elephant’s Head, issued in 1977. One assumes it follows the style of the Leopard and Ram heads of the previous year. 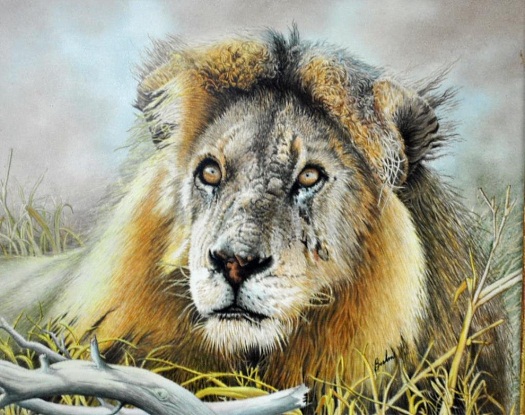 Starting with #600-24 this design code series switched to certain collector plates (not plaques) that were all made in New Jersey and thus it appears that the Lion’s Head was the final one in the 600-series of plaques.

Of course my first example is one for which I have no photo. This was reportedly a pair of plaques, titled Melange de Fruits, issued in 1974 as an edition of 10 pair. This is the only instance I can find of Boehm selling plaques as a pair instead of individually. Six such pairs had been completed by the end of 1976. These plaques were larger than the others and horizontal in orientation, being 16.5” high and 22” wide as framed.

“The Big Five” is a series of five animal heads on circular plaques, designed by David Shepherd and released in 1978 as an edition of 2000 per design. The five heads are Elephant, Lion, Rhinoceros, African (Cape) Buffalo and Leopard. The circular tiles are only 5.5” (14 cm) in diameter and the item as framed is 9.5” (24 cm) square. 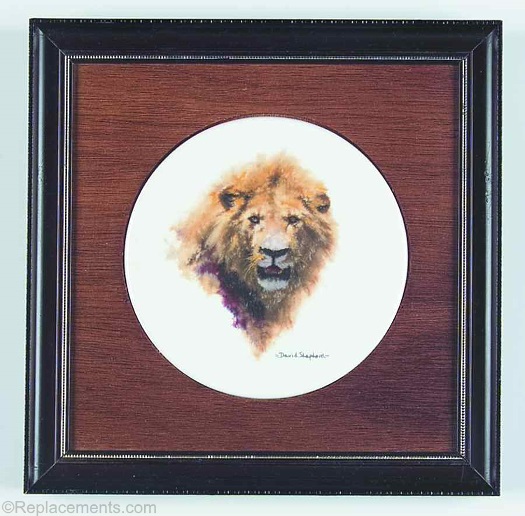 The framing of these plaques vary.  Some sets are backed with brown velour fabric and the wood frame is covered with brown leatherette (faux leather); other sets have a woodgrain backing and a black wood frame. Why the difference?

Here is an example of the backstamp on a plaque with the velour-and-leatherette framing. It clearly says Made in England. What I would like to find is a photo of the stamp on a woodgrain/wood framing, because at least one online seller cited the Big Five plaques as having been sold to benefit the USA chapter of the World Wildlife Fund. Such items almost always had that fact cited in the backstamp and usually included the WWF logo, but the stamp shown above does not. It is possible that the ones made in/for the USA WWF market are the ones with the woodgrain back and the UK/Euro market ones have the velour. The term “Big Five” refers to the fact that these animals are not only the most often poached but are also the most difficult to hunt on foot. It is a popular genre for mass market collectibles such as coins, stamps, prints, etc. 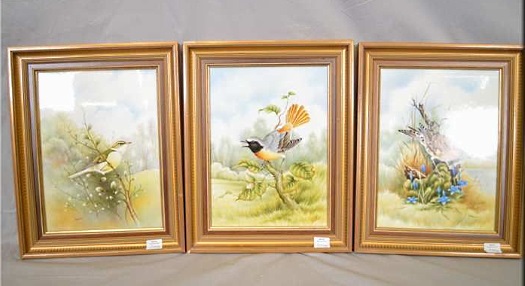 And finally here are three Malvern plaques that don’t seem to fit anywhere. The backstamp is stunningly unhelpful, offering no information other than the title and the issue size (50 each.) From left to right, they are Willow Warbler with Pussy Willow, Redstart with Hazel, and Linnet with Gentians. These are small plaques, being only 7.5” wide x 10.5”  high as framed. Although they are undated, these three subjects correspond to three 1977 Boehm open-edition sculptures of the same names and appearance (#200-49, #200-46 and #200-45, respectively.) It seems only logical that these would have been issued at the same time. It is interesting to note that the Royal Worcester studio had done the exact same thing (issued framed plaques based on sculptures by Dorothy Doughty) in the early 1970s, so the Malvern Boehm studio – many of whose artists were ex-Royal Worcester – appears to have copied the idea a few years later.

The Redstart plaque is a good rendition of its corresponding sculpture. 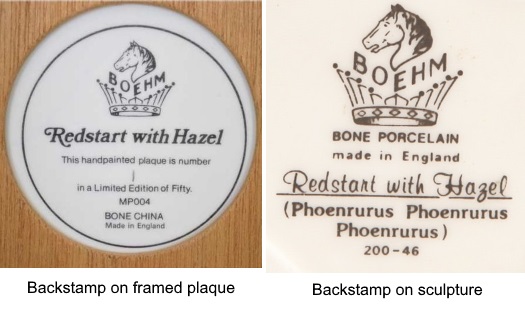 The design code series MP on the plaque backstamp is intriguing; P probably stands for “plaque”, but what about the M? I would like to find out if there were more of these sculpture-based plaques produced. It’s unusual to see a limited edition item (plaque) based on an open-edition item (sculpture.)

My Boehm of Malvern retrospective will continue with future posts examining the studio’s work from 1980 until its closure in the early 1990s.