Some wise person named Anonymous once penned this great truism:

If an article is attractive or useful or inexpensive, they’ll stop making it tomorrow; if it’s all three, they stopped making it yesterday.

Well, I have the dubious distinction of going this universal law one better: If I really really love an item, its days are numbered. In my family this talent of mine is known as the Curse of Discontinuance (or The Curse of D for short.) Trust me, I am Typhoid Mary. The Kiss of Death.  The Grim Reaper of Retail.  And I have not only killed off specific items – I’ve managed to send entire companies to the Great Beyond.

This makes me sad, and not only because I can’t buy any of these wonderful/useful/well-made gone-but-not-forgotten items anymore. The least I can do is memorialize some of my very favorite long-lost products. Perhaps they were among your favorites as well? 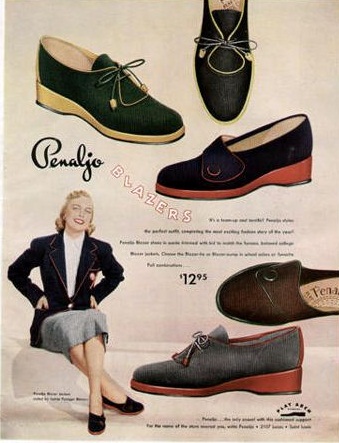 The first example is also one of the oldest in terms of how long they’d been around before my unbridled enthusiasm took an axe to the company. The Penaljo shoe brand began in the 1950s; this advertisement is from 1951. In the early 1980s they built a nice shiny new factory to produce their shoes which were designed for maximum comfort; their new trademarked phrase was “The Fine Art of Comfort.”

That’s when I discovered them because I’d always had trouble finding comfortable shoes for my size 7.5 W feet that also have a narrow heel and a high arch.

Penaljo shoes were absolute heaven to wear. Even their sandals were comfy! I had the pair shown above in black, white, beige, and even gold and silver metallic for dressy occasions and by the mid 1980s Penaljo was the only brand of shoes in my closet. That’s when the D Curse hit. In 1985 the owners sold the company to an Australian firm, Pacific Dunlop Footwear.  In 1989 Pacific Dunlop went bankrupt. In 1990 a group of speculators bought the Penaljo brand name; the company barely survived for three years, probably because they didn’t use the original Penaljo “lasts.” There were no more comfy new shoes for me. ☹

Ever need to strain only one or two servings of something like, say, veggies or pasta? A regular size colander would be overkill but this handy stainless steel style lets you hold the pan in one hand and the strainer in the other. Unlike the mesh kind it is super easy to clean and the handle is perfect; they called it the Supergrip Colander. It was made by MetroKitchen and sold for about $10. When shopping for my daughter-in-law’s bridal shower in 2013 I wanted to buy her one of these. Of course I couldn’t.  Let’s put it this way: you’d have to pry mine from my cold dead hands… 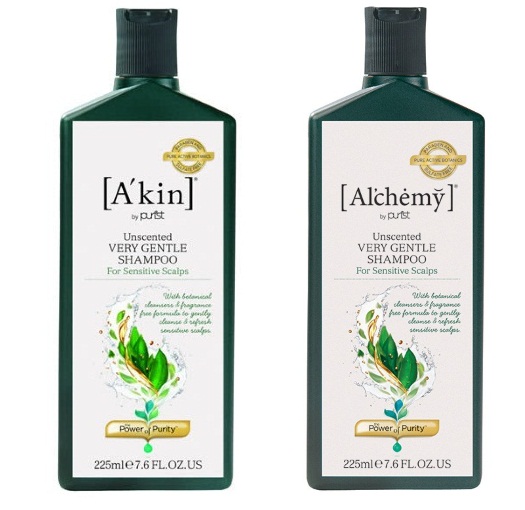 Because I’m super-ultra-sensitive to any kind of fragrance, finding a good shampoo has always been a problem. In the early 2000s I found a fantastic brand from Australia that was sold in the USA by only one distributor on the west coast and only online. They were mostly botanicals but also had an Unscented Very Gentle Shampoo that made my hair look fantastic. In Australia the manufacturer (Purist) sells the line under the brand name Alchemy but for the USA market they renamed it A’kin …no idea why.The ingredients and packaging were identical. I didn’t care what they called it as long as I could order it online and have happy hair days. For less than two years. Suddenly the Powers That Be down in Oz pulled the plug on selling to the American market. In desperation I asked a friend of mine in Sydney if she would buy two bottles of the shampoo locally and send them to me while I tried to find an acceptable substitute here. Between the currency conversion and the international postage, those two bottles ended up costing more than $100. They’re used up now, and my hair has never looked quite as good after that. I am so envious of my Australian readers!

Another perfect fragrance-free product was this brand of hand wipes which was marketed for kids but also great for adults. I discovered these in 2010 when I went to the (recently defunct) Toys’R’Us store to shop for a gift, and tried one box. Then multiple boxes, because I kept a supply of packets in my car, my purse, the garage, pretty much everywhere. Within six months Toys’R’Us stopped carrying it. Okay, well, let’s fire up the trusty Amazon search engine. No problem, I was able to order them there. For one year, until all of a sudden the dreaded “No longer available” popped up. The manufacturer had replaced these with with a ‘similar’ product that nevertheless was made from an entirely different material (thinner and harsher) and in a much smaller size. Which was odd because the new version wasn’t even marketed to kids. And every other sanitizing wipe on the market today has a fragrance. I eventually gave up and switched to a Clorox brand fragrance free alcohol-based spray which is fine except that you can’t also easily use it to wipe things off (like cart handles.) I can only buy the Clorox mini-sprays online and I expect they’ll probably disapear from the production line any month now.

Gardeners and weekend yard-warriors will mourn with me for this one. This marvelous invention was called the Trash Funnel. It first appeared in 1993 and was written up in Popular Mechanics magazine as one of the best new products. It was made and sold exclusively by a company in upstate New York and cost $50. This is the sturdiest, most practical, virtually indestructible 39-gallon lawn/trash bag holder you’ll ever see. The wide mouth lets you toss or dump stuff in there without any misses (especially useful for autumn leaves), the hinged top locks down over the bag rim so nothing never falls out, the top is super heavy duty plastic and the metal legs are steel that the Incredible Hulk would have trouble bending. Best of all, it can easily fold down to store against a wall. I bought one for myself in 2003 and then another as a gift for my son the following year. I have seen renovation contractors look at this bag holder lustfully. It occurred to me about five years later that maybe I should invest in a spare “just in case”. That’s when I found out the manufacturer had recently gone out of business and that Trash Funnels are no more. If you are lucky enough to have bought one of these, hold onto it for dear life and maybe put it into your will. Your heirs will thank you, especially when they have leaves to rake. 😉 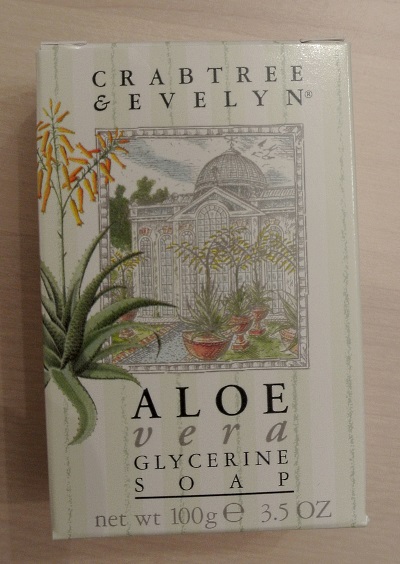 I mentioned buying discontinued products by the case, and this is perhaps an extreme example. It’s definitely in the “all good things must come to an end” category. Waaay back in the 1970s I began using Crabtree & Evelyn’s Aloe Vera Glycerine Soap… the only soap I’d ever used that didn’t trigger my allergies. (They also made a milled bar version but that was more drying.) It became my sole soap and when my son was born it was the only one for him as well. Until in 2002 I discovered they’d discontinued it. Shock and panic!! I ended up buying the last bars left in the Crabtree & Evelyn warehouse. Hundreds of them. By my calculations I should have enough to last until I’m 87 years old, at which time I’ll have a problem. Because I’m a good mother I’ve given several three-packs to my son as birthday or holiday gifts; he saves them for the times when he has a sunburn and needs that special extra TLC.

And finally the two companies I managed to kill off within fairly short order after discovering them. One was a womens clothing chain called Northern Reflections. They originally launched in Toronto in 1985 as a division of Woolworth Canada and expanded into the USA during the early 1990s. By the late 1990s they had almost 1000 stores here, all located within shopping malls. What made them unique was that all the clothing they sold was made in Canada… and they ran true to size! The materials used were top quality; I have a quilted all-cotton ¾ length hooded winter coat that I bought more than 20 years ago there. It sees daily use during at least three winter months and has been tossed in the washing machine more times than I can count. It still looks like new. In 2001 all the American stores suddenly ran “going out of business” sales and were cleaned out in a matter of days; the parent company had decided to dump the USA operation in favor of “athletic apparel” instead.  To be fair, I had noticed during the previous months that made-in-Asia items had been creeping into the stores’ inventory. You could tell the difference in both quality and fit between those and the Canadian products. Technically I supposed I haven’t quite killed this company because they do still sell online (only) under different ownership and have four stores in Canada, but their wares aren’t the same. They are just like a hundred other such retailers now.

A similar situation occurred with the American retailer Coldwater Creek: mall stores, good quality merchandise (about 50/50 made in USA/made offshore) and good selection. Unlike Northern Reflections, this company started as a mail order business in the mid 1980s. Two unusual features of their catalog were (a) clothes were never photographed on live models and (b) the descriptions were very well written. As in, interesting. It took them almost ten years to open their first retail store but the locations steadily multiplied like rabbits and by the early 2000s they were on track to have more than 500. I shopped there regularly, especially for jeans which miraculously fit me properly and comfortably with no alterations, which no other brand had ever done. It was like discovering a gold mine.  In 2008, coincidentally with the Great Recession, the business cratered and by 2014 they closed all their stores and went down the bankruptcy rabbit hole. Later that year the Coldwater Creek name was bought by the same company that owns Talbots and Nine West, and reappeared as a catalog-only operation (the more things change, the more they stay the same.) I ordered a pair of jeans from the new catalog in my usual size. They didn’t fit. I ordered the adjacent sizes. They didn’t fit. I ordered the same 100% cotton blouse I’d always bought in the stores. The material was awful. I gave up. As Queen famously said: And another one gone, and another one gone, another one bites the dust..

At least I don’t have to worry about my new car, which I absolutely love, disappearing anytime soon…. because by the time I bought it, it was already a previous-model-design leftover.  Whew: Safe!!! 😊

p.s. I should probably post a future-availability warning about Langnese Acacia Honey, though, because I’ve recently become very fond of that!