This final instalment of my overview of the Boehm of Malvern studio in England covers three genres (human figures, decorative eggs, and holiday ornaments) plus a commemorative home décor item.

The “people pieces” from the 1980s studio were  — other than any single-item special commissions that may have been done, such as the 1979 Elgar bust at the end of this post – issued as part of series. The series shown below were all launched in 1986 and have design codes in the 102-xx range.

The Women of History series had great promise but does not seem to have included more than three known pieces.

This is the backstamp format for this series.

Another piece in this series was Marie Antoinette (supposedly design #10271) but I have been unable to find any photo of it.

I have not found any indication that there were more than these three figures in the Women of History series. If anyone has any other figures in this range, or a photo of Marie Antoinette, please let me know and I will be happy to add it to this overview. It does seem a shame because there would have easily been enough other female characters to create a series of six, eight, or more figures.

Another 1986 series was the Victorian Children which are all about 9” tall. At least three of them had a very short production run! 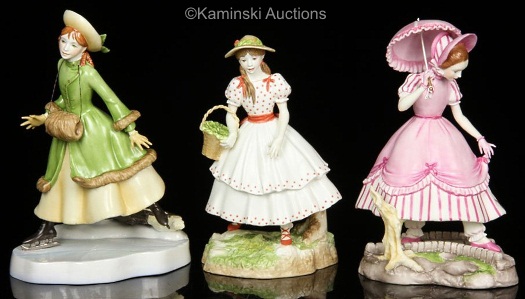 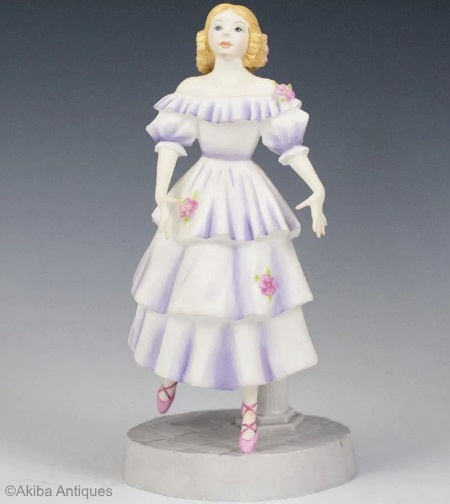 Amy is the only other piece this series I’ve been able to discover; she is design #10273. It’s not known how many were produced.

Obviously the design number gaps are intriguing although after the 1970s the studio tended to mix genres willy-nilly within number sequences rather than separating them. So we have no clue yet as to what pieces were given #s 10270, 10274, 10275, or 10276.. covering the range between Jo Skating and Nefertiti.

The World of Children series was released in its entirety (seven designs) in 1986. All are about 9” tall.

All have a “Premier [sic] Issue” designation in the backstamp, despite the fact that the 1986 pieces were the only ones produced. Obviously the word premiere – meaning ‘first’ – is misspelled as “premier” which means “best”! (Was there a less-good issue? LOL) 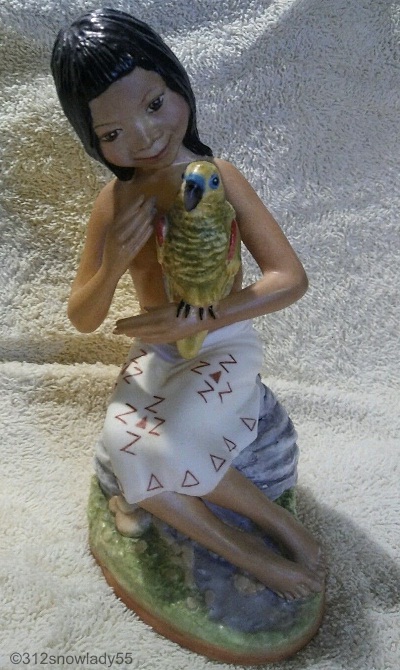 The Boehm Collectors Society offered a series of five porcelain-and-bronze fairies exclusively to their members in 1986. Each was an edition of 100 pieces and were priced at $775 each.

Again this is a series marked as if it was the first of several even though there was only the single issue. 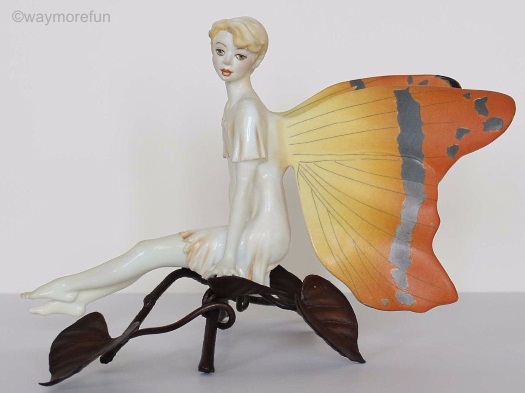 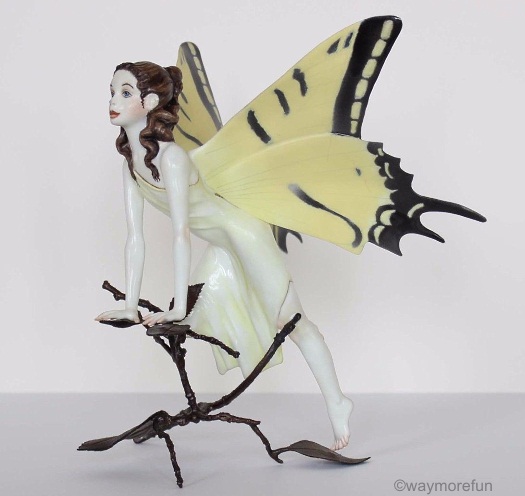 An oddity is a series of open (non-limited) editions called Cupids in Fantasy showing a cupid astride various animals, all with a BW-series design code. 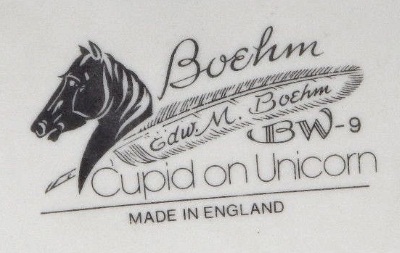 The backstamp has the USA studio’s horse-and-feather logo, but also clearly says “Made in England.” The BW design code always meant “bisque white”, i.e., plain white with no color or glazing These BW design numbers began at the Trenton studio with a replica of a 1950s madonna bust (BW-1, La Pieta Madonna) and were always human figures either completely or in part. Many were religious subjects and the final one was Moses at BW-51. So this cupid series was clearly a Trenton brainchild although produced at Malvern. If the series continued past the Malvern closure, I would expect that some might have been then made in New Jersey.

The Eggs of the Seasons series was a retail commemorative, and the backstamp tells the story: To Commemorate The Boehm Porcelain Exhibition Moscow USSR May 17th – June 27th 1987

This was one of several retail pieces that Boehm issued in connection with that particular exhibit. The eggs are 6.5” high and 3” in diameter. Each contains an ormolu (gold-plated bronze) miniature figure with one or more tiny (7-point) diamond accents, no doubt produced at the Boehm of Llandow facility. The original price of these eggs is not known. 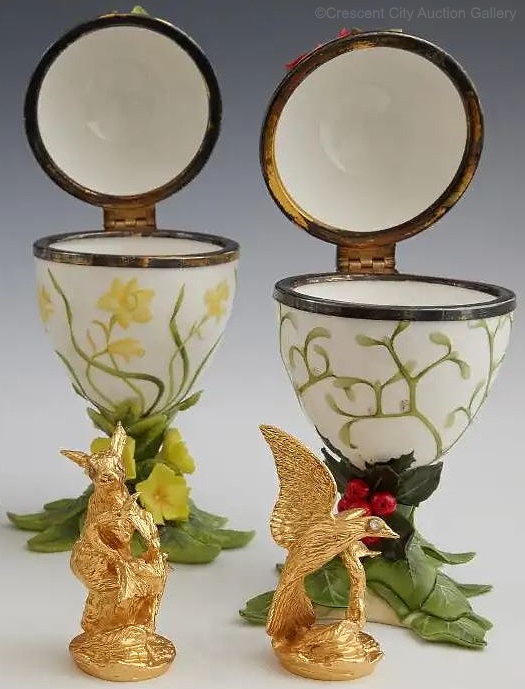 The Spring Egg (#651-14) features daffodils and primroses, and contains a rabbit; the Winter Egg (#651-17) has holly, mistletoe, a poinsettia, and a bird who identity is unclear but perhaps may be meant as a dove of peace. 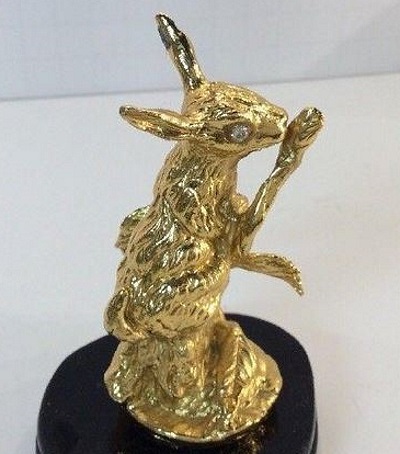 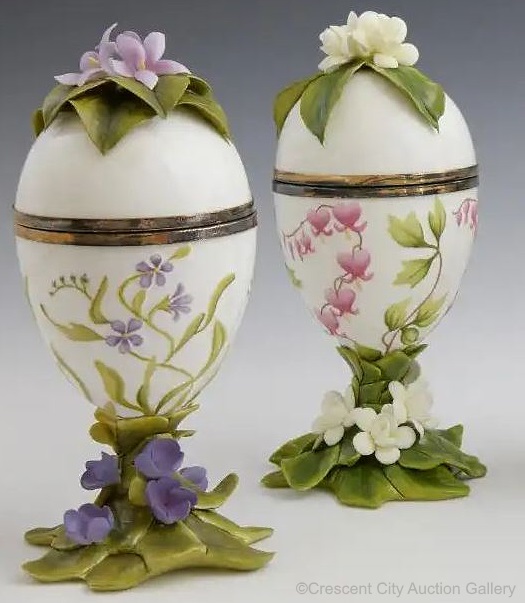 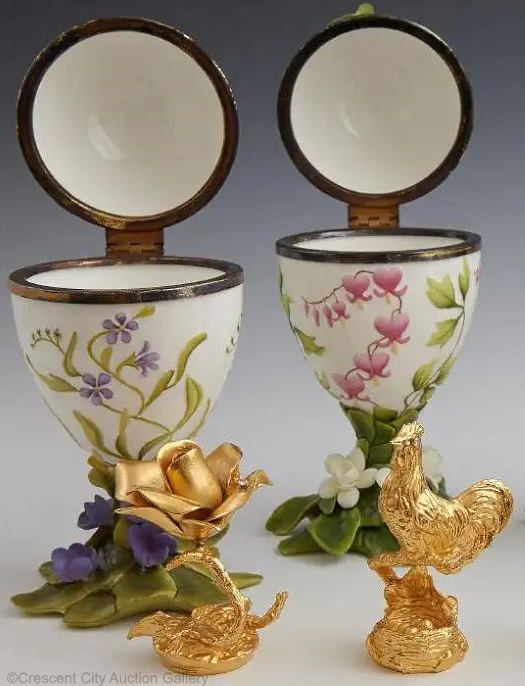 The floral association of the other two eggs is less clear. The Summer Egg at left has a top flower that appears to be a clematis but the purple flowers are not as identifiable; the figure inside is a rose with a tiny diamond ‘dewdrop’ on one petal. The Fall Egg is even more confusing because it shows a pink bleeding heart (a definite spring flower) and a white gardenia (late spring/early summer)! A rooster with diamond eyes in inside.

It is difficult to discern in most photos of these eggs but the flower design on the surface is slightly dimensional rather than flat.. The angle of this photo makes it more noticeable, especially on the edges of the leaves.

Two years later (1989) at least two eggs with internal porcelain sculptures were released. They are not dated but their design numbers are adjacent to items released during that year. These are more like “three-quarter eggs” because almost the entire front is open. They remind me a bit of the fanciful sugar eggs that were popular Easter items during my childhood! 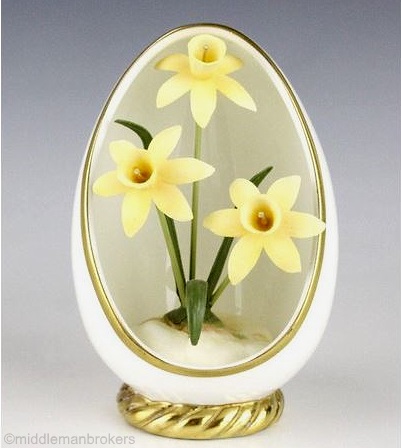 The Egg with Daffodil is design number is 204-70. Were there two others between this one and the Lily of the Valley Egg?

HOLIDAY ORNAMENTS and a BOWL

There were a number of Boehm-branded holiday ornaments but only three (and a partial run of a fourth) were made at the Malvern studio. These were given design code SP78 (the S in “SP” seems to have stood for “special”, perhaps “special production”?) followed by a letter. 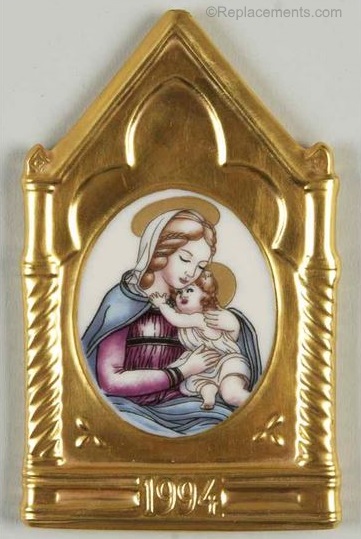 Boehm released a Madonna and Child Ornament in 1994 (design #SP-148) which was just about the same time that the Malvern studio closed. This is why some of these are marked Made in England and others marked Made in U.S.A. The ornament is 4” high, 2 3/8” wide, and about ¼” thick. It has been variously described as a holiday ornament and/or a miniature plaque. Because of the small size and the prominent date, I believe this belongs in the ornament category.

To commemorate the Ruby (40th) Wedding Anniversary of Queen Elizabeth and Prince Philip the Malvern studio issued this 8” x 4” bowl. It is the same mold that the Trenton studio used to produce at least 20 bowls of various designs and issues, some of which will be shown in my upcoming retrospective of the New Jersey studio.

Browse all Boehm of Malvern posts