Gardeners are nothing if not resourceful, and unless one has money to burn (hint: Not me!) we always have that “Where/how can I use this?” question in the back of our minds. Not long ago it popped up in mine and although it took a little bit of time – okay, well, more like a year from idea to reality – I ended up with something new and a problem solved. But first let’s go back in time to the original scenes of the hopefully-not-crimes. 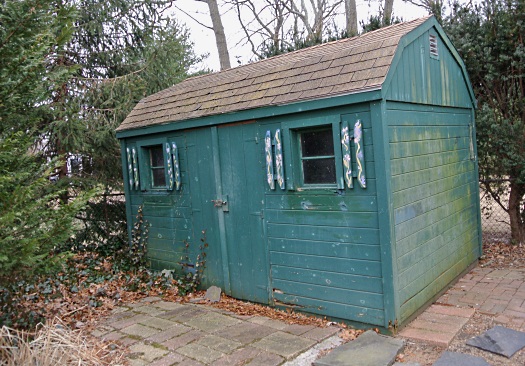 When I bought the Money Pit it included this 8’x12’ shed in a fair state of dilapidation. Its eventual demise and replacement in early 2018 are illustrated in Old Shed, New Shed. This photo was taken on the day of the pre-purchase inspection in late March 2013. 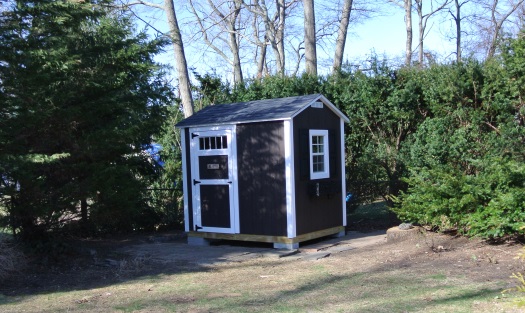 Fast forward to May 2018 showing the area in front of the new shed. Singularly uninspiring, don’t you think? Although it looks dry here, don’t be deceived: This area was shaded by several oaks, numerous evergreens, is downslope from the shed area and in rainy weather it became a muddy mess wherein grass struggled. In winter it was the last place from which the collected snow and ice melted. Basically, it was the definition of “blah.”

Although a future post will chronicle the transformation of this Courtyard Area (still ongoing, long story best kept till later) it originally included this short slate/bluestone pathway leading to a wood patio. All of this was ripped out in August 2018, at which time I looked at the pieces and said “Maybe I can use these somewhere” … so they were set aside.

Originally, I thought they could be used to make more of this sloppy hose-bib area a bit drier. It already had these few slabs anyhow. The re-siding job in October 2018 made the spot look even worse, so I decided that part of the future Courtyard renovation would include paving this area as well. And so, after that work was done in March 2019, I had a fair-to-middling pile of homeless stone slabs. The mason asked me what they should do with them. I said “hmmmm…” while looking balefully at the still-filled-with-ice area near the shed. [cue lightbulb icon above head]

Me: “You still have some of that RCA [recycled concrete & aggregate, a/k/a/ paver-base material] left over, right?”
Mason: “Yes.”
Me: “Can you dump a couple wheelbarrows of it onto a low spot in the back yard? I want to use those old stone slabs to make a little hardscape area over that spot.”
Mason: “Sure. And when we’re all done, we can compact it and put the slabs down for you too. Where do you want them in the meantime?”
Me: “Oh just pile them on the driveway for now.”

So, the RCA got dumped, but with one thing and another it didn’t get compacted and the masons didn’t have a chance to do the slabs either (and since it was supposed to be a freebie, I didn’t want to nag.) Another snowstorm here, another rainy spring there, and the pile of slabs sat in the driveway for almost two months until, as part of yet another planting bed rip-out, I managed to get a landscaping-crew guy to at least wheelbarrow them from the driveway to the backyard near the shed. Guy said he would stack them up. He didn’t, so there the pile sat. 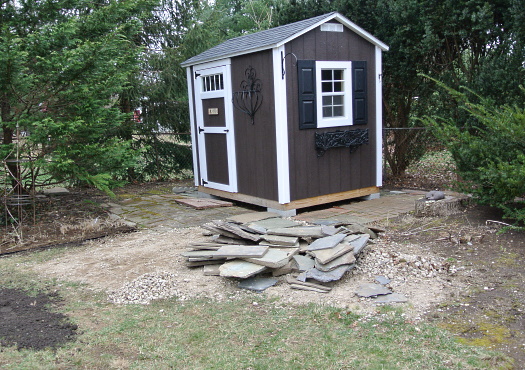 And it sat. And it sat. For the rest of April and all of May. Rather like the Dr. Seuss story Horton Hatches the Egg, except these “eggs” were flat and heavy! 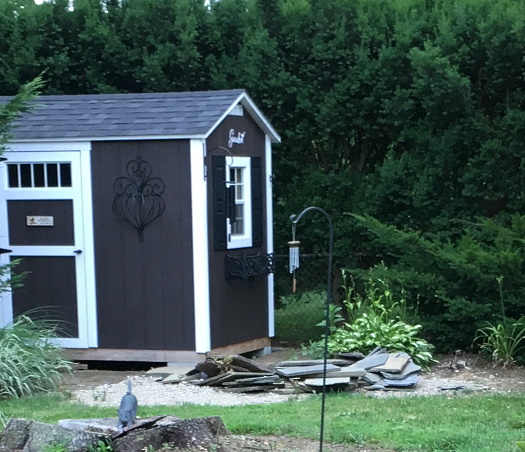 Finally, I’d had enough and decided that I was going to make something out of this sloppy pile or kill my lower back in the attempt. I have no excuse for starting to do this on July 13th other than temporary insanity.

The first order of business was to create an outside edge. Mind you, I had NO idea how many of these things I actually had, or what shape they each were other than vaguely rectangular. Or wedge-y. Or something. But I figured that the biggest ones were probably the best for the perimeter because their weight made them less likely to be dislodged by the lawn cutting guy on his riding mower. 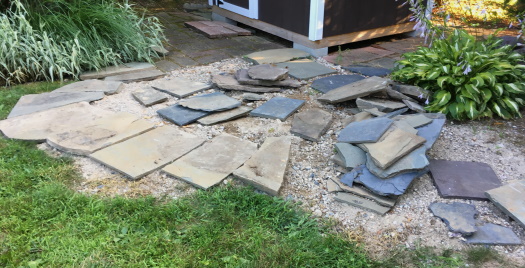 I wish I could say that I was able to move the pieces off the area and sort them out in the grass. I couldn’t. It was bad enough trying to move them at all, due to the weight. I did become quite adept at the rolling-along-on-its-edge maneuver though. Some of the bluestone pieces took exception to this treatment and split (literally.)

By July 26th I had this much done. It was like working on a particularly frustrating jigsaw puzzle, especially since I had to “grade” the RCA as I worked on each small section.

On July 29th there were only seven pieces left. Of course, they were all the smallest ones and had to fit into the “final” section which is to the right front of the hosta. Of course, they refused to do so on the first, second, fifth or tenth attempts. There was always one remaining gap that every remaining piece was either too small or too large for. But as Tim Gunn is fond of saying, I “made it work.”

The RCA underneath actually provides the appearance of ‘grout’, in a way. I do realize that I will be spraying and pulling weed seedlings out of those spaces for the rest of my life.

The view from the shed door looking across the new “crazy paving/mosaic patio” across the back part of the garden. But that final section, composed of the smallest stone pieces and the largest “grout” spaces, definitely bugged me. 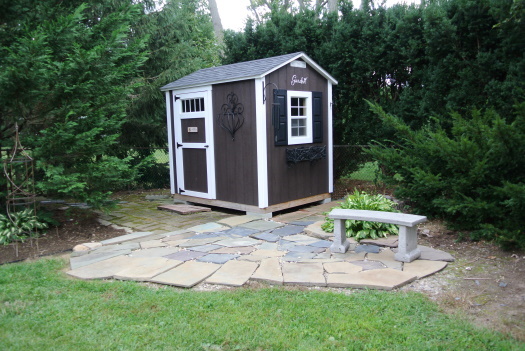 What I really wanted to put there was a nice small dark-ish granite or marble bench, no more than 3 ft wide so as to fit in that end space and not take up too much room. Unfortunately, the only halfway appealing ones I could find locally were $500 and up (mostly up) plus delivery fee (another $50) and sales tax. It would likely cost about $700 which simply isn’t in the budget. So, I settled for this simple Massarelli ‘cast-stone’ bench on sale for $130. I’m not terribly in love with it but it’s the right size, the right price, and serves the purpose. Maybe it will “age gracefully”?? And it provides a place to sit in a part of the garden where there wasn’t any such accommodation.

It is nice to no longer have a sorry-looking almost-bog at the approach to the shed, and since this section of the yard is a Poison Ivy Hotspot it will be one fewer area where it can pop up. (If it does, it will be easily noticed and dealt with.) There’s still that bare-dirt area next to the bench which is less than 3 ft square; there’s a slightly raised bed on the other side. A coupe of variegated hostas in that spot would work well, or even – and this might be the easiest way, given the number of subsurface tree roots – a single plant of the ginormous hosta ‘Empress Wu.’ Or maybe the slightly-less-ginormous variegated hosta ‘Victory” …. which would be even more appropriate in view of how I felt when I finally completed this little ‘reclamation project’! 🙂

← Favorite Cat Memes, Part 8
A Garage By Any Other Name… →