The words ‘chocolate’ and ‘opal’ don’t usually pair in most jewelry aficionados’ minds – considering that their wondrous play of color is what makes opals so special – but there actually is such a thing.  However, they differ in several respects from the more familiar forms of opal.

The differences begin with how chocolate opals are formed: their origin is volcanic, rather than sedimentary as is the case with most other opal. In fact, these unusual opals weren’t even discovered until 1994, at Yita Ridge near Mezezo in the Shewa Province in Ethiopia. (More than a decade later, another type of opal would be discovered in the province of Welo but they are very different from the Yita ones.)

Ethiopian opal deposits contain a much lower percentage of stones containing “fire” (color play) than do stones from countries such as Australia. But when they do, they are far more likely to exhibit the coveted red which is relatively rare in opals from other locations. Ethiopian opals (of either chocolate or Welo type) form in nodules rather than seams, and are typically hydrophane: They absorb water quickly and their appearance changes as a result. This is dramatically seen in Welo opal which is sometimes near-colorless when dry but turns into a veritable peacock when submerged in water.

The body color of the Shewa chocolate opals ranges from a caramel-brown to a milk-chocolate brown. Some of the caramel-brown ones have a distinct reddish cast but are still considered brown (or “chocolate.”) It’s all a matter of personal preference, but I think the truly chocolate-brown examples are the most attractive; if I wanted a red-bodied opal, I’d get a really dark Mexican fire opal instead.

There is no gem-industry-standard manner of grading Ethiopian opal compared to opal from other sources. In black opal, for example, the body color factors in to the valuation process but in the Ethiopian stones – whether from Welo or the chocolate ones from Shewa – it does not. Thus, it doesn’t matter much (value-wise) whether the body color resembles a rather anemic caramel or the darkest of 70% Valrhona dark chocolate. Of more importance with Ethiopian opals are the type and intensity of the colors and the patterns they form.

This is a nodule of chocolate opal showing areas of color-play within the chocolate-brown body color. These nodules originally look like the back-view photo all around, and so need to be broken open to see whether the interior contains any play of color.

A major downside to chocolate opal is its strong tendency to scratch, crack, and craze; it’s one of the most unstable of opal forms. This is why it is much less often seen in jewelry; great care must be taken with it and the likelihood of damage at any stage of the process is very high. Stones can also craze or crack over time even if merely kept as display pieces of ‘rough.’ It is also why hundreds of nodules need to be broken open before one or two are found that have a center that is both attractive and might be usable for anything. 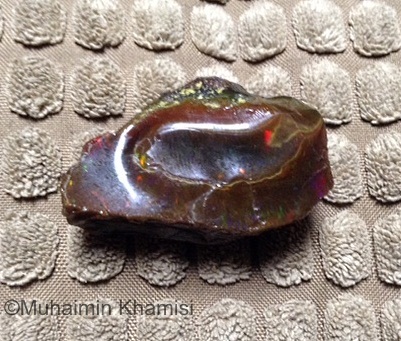 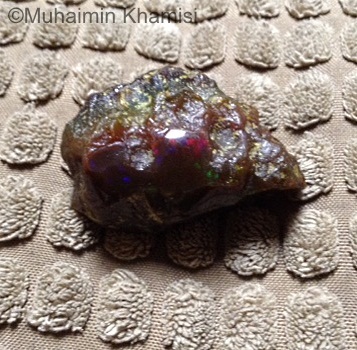 This is a very good example of a piece of dark chocolate opal ‘rough’ that has been polished so as to display the play of color from all sides and angles; many thanks to its owner for sharing these photos!

This cut and polished round cabochon (flat back) stone was offered at Bonhams auction gallery in London. Described as an “excellent ring-sized stone” (for a large hand, no doubt!) it weighs 11.9 carats and measures 16mm x 8 mm. 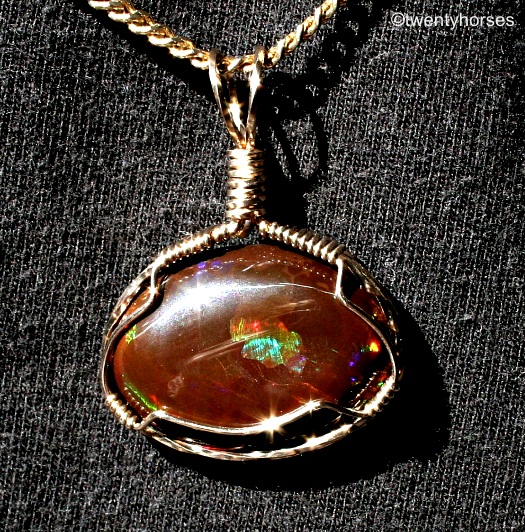 This oval shaped chocolate opal has been set into a pendant.

This is a beautiful chocolate opal that has been put into a diamond-set pendant mounting, and received a Gemological Institute of America (GIA) grading report. In such cases the stone is removed from its setting for examination. 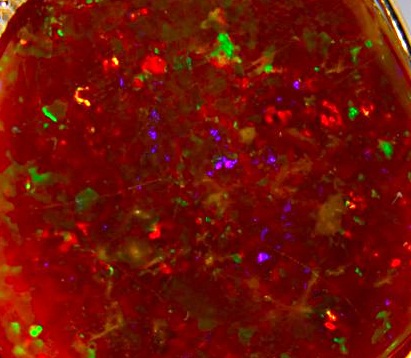 You can see that this stone exhibits three of the four most desirable colors: green, purple, and red. The only possible color this stone lacks is blue.

Nevertheless, the GIA’s colored-stone report is fairly minimal. It verifies that the stone is natural (neither synthetic nor dyed, a subject I’ll touch on in a moment), that the body color is classified as Brown, and that it has a play of color. It’s a large stone (59.61 carats) measuring 37.66 x 34.73 x 7.30 mm. The triangular shape of the stone is minimized by the custom setting it was put into.

A search for “chocolate opal” on eBay will typically produce a few hundred results, the vast majority being pieces of rough. Those that are sold as “clarity enhanced” (which usually means some type of heat or diffusion treatment) sell for $10 or so, more or less. At least those sellers do disclose that what they are offering is no longer 100% natural. Pieces that are assumed to be natural, and are also claimed to be stable (i.e., having been out of the ground for periods of time measured in years) usually sell for between $50 and $200 depending on size.

For example, here is a piece of approximately 60-carat rough for which the seller is asking $65. It is described as stable old stock: “This piece has been out of the ground for 8 years and is stable. There is some crazing that occurred early on and has not since progressed.” With proper handling and storage, this piece should not exhibit any future problems but obviously it could never be used for jewelry.

On the other hand, there are quite a few items tagged as “Ethiopian Black Chocolate Opal” which are clearly not either. They seem to be mostly from a seller who is located in India. The leftmost example above looks like Welo opal, but neither it nor the others would be considered “chocolate” by most people.

A search on Etsy will also result in many listings for roughs but also for handmade finished jewelry pieces. Accuracy will vary on these. Sometimes a seller will describe an ordinary dark-body-color stone as “chocolate” even though there is no hint of brown. Ethiopian polished (with the surrounding matrix removed) pieces of rough are often put into a wrap-style sterling silver setting. These will typically sell for between $50 and $150 depending on size. What is unknown is how long the stones have been out of the ground, and so even if one has no crazes or cracks at the time of purchase, it could possibly develop them at a later date. Again, many jewelry items on both venues are more of a caramel or brownish-orange body color rather than what most people think of as chocolate.

This brings us to the subject of dyed stones. It is of course possible to darken the body color of an opal in that way, and in a 2017 issue of the GIA publication Gems and Gemology an article titled “Ethiopian Precious Opal with a Dyed Brown Bodycolor” appeared. It’s worth quoting:

Brown opal exhibiting play-of-color has been previously reported (1996) and can occasionally be found in the marketplace as “chocolate opal.” Recently, a 17.15 ct semi-transparent oval cabochon with brown bodycolor and strong play-of-color was submitted to the Carlsbad laboratory for identification services. While this specimen’s properties were consistent with Ethiopian opal with a natural brown bodycolor, it was necessary to confirm that the color was not the result of dye, since this was hydrophane-type material. Meticulous examination showed that the brown color conformed to the surface, indicating that it was in fact the result of dyeing after the stone had been fashioned. The uneven bodycolor was difficult to detect because of the stone’s transparency and strong play-of-color. Careful microscopic examination with strong transmitted and diffused white lighting revealed very subtle color concentrations in pits and uneven blotchy brown patches on the surface, which confirmed that the brown color was artificially induced. ….When examining opal, it is important to consider carefully whether it could be dyed, especially if it is hydrophane material with a color that occurs naturally.

The GIA article stresses an important point (which was also made in their 2011 article reporting on so-called purple Ethiopian opals which were simply dyed Welo opals) which is that because Ethiopian opals are hydrophanic (easily absorb water) it is not all that difficult for stones to absorb dye into their outer layers as well.

When buying chocolate opals as jewelry pieces, the sensible approach is to keep in mind that (a) there is a real possibility that the stone may craze or crack unexpectedly [or you may be lucky and it may not] even during normal careful usage, and (b) if the body color is particularly deep and rich, it may have been dyed or otherwise artificially enhanced. If you become enamored of a particularly pricey piece of “chocolate”, it’s probably worth investing in a GIA colored-stone report; it’s smart to condition your purchase upon a satisfactory outcome. The current (2020) fees are tiered according to type of stone and carat weight. For opals (loose or mounted) they are: up to 19.99 ct $70; 20.00 to 49.99 ct $85; 50.00 to 99.99 ct $120, and so on. Most jewelry stones will fall into the $70 category. It is up to the customer to decide whether to ship the item to and from a GIA location or to bring it in person.

In any event, the chocolate opal is an unusual addition to any chocolate-lover’s jewelry box!

← On the Naming of Garden Beds
Big Brother, Little Brother →