Have you ever made such a stunningly stupid, colossally clueless and yet breathtakingly basic planting-plan error that the only thing you can do is keep repeating to yourself “How in the world could I have ever failed to…????!?!?!?”

I’m not talking about deciding to take a gamble on something that the left side of your brain knows perfectly well is marginally hardy (at best) in your zone. We do that all the time. Well, sometimes. Like the Loropetalum that I bought this spring, or the Eucalyptus perriniana that I once managed to keep alive through two Zone 7 winters before Mother Nature slapped me down for my impertinence. But at least we acknowledge, at some level, what we’re doing. I’m talking about completely missing something that has been right in front of my face for six years.

If you’ve read my ‘Temporary Garden’ posts, you may remember that I moved into the Money Pit in late 2014, so 2015 was the first year that I was able to really assess what kind of garden I’d acquired. 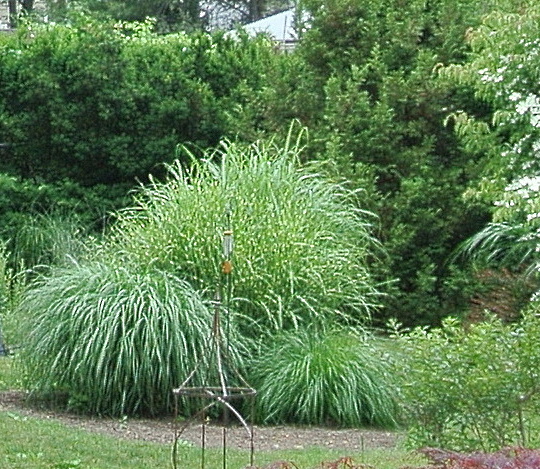 One of the many planting beds in the backyard was this one, which was inhabited by three large Miscanthus and a thriving population of mugwort that had moved in after the previous owners cleared out their dahlia collection. This photo is from June 2015. I am not a fan of large ornamental grasses, having made that mistake at my previous garden, so “have grasses dug out” was on my very long to-do list. 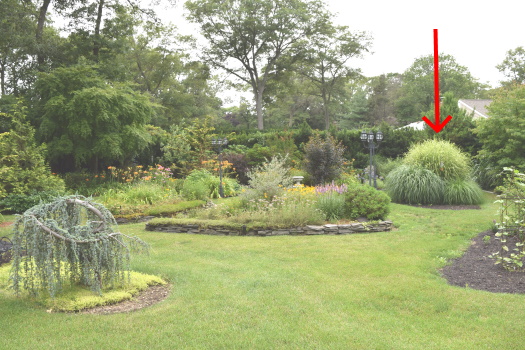 This photo was taken a month later, and was the view from my west-facing kitchen window, at the sink. It is the window that I look out of about 95% of the time, maybe even 98%. The west orientation means that unless I pull down the opaque roller shade in midafternoon, the sunlight streaming in through that window can be absolutely blinding. (This is something I learned on the first sunny afternoon after I moved in.) The arrow is the grasses bed. 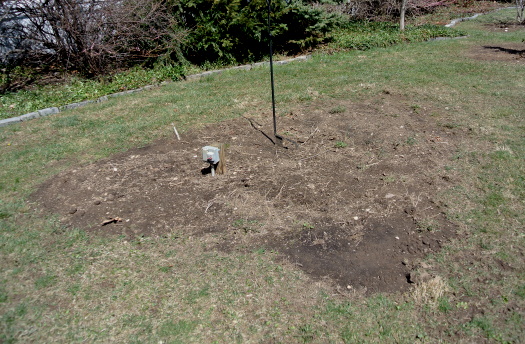 It took me until February 2018 to get my head far enough above the bottomless “projects” waters to have someone come in and dig out the grasses. A pleasant surprise was the discovery of an electrical outlet. Of course the outlet didn’t work, but I thought it would be handy, so I had it replaced. I’d managed to get rid of the mugwort – after two years – and decided that this would be a great location for one of my favorite trees: Halesia carolina ‘UConn Wedding Bells’. This area went from being called the “ex grasses bed” to the “silverbell bed” in anticipation. 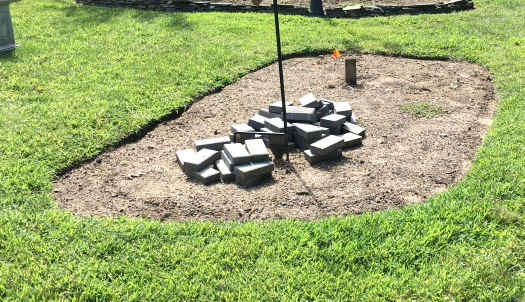 2018 was a year in which the Money Pit fully lived up to its nickname, so it wasn’t until August 2019 when I got around to putting some temporary (cheap 50-cents-each pavers on sale at Home Depot) edgings around many of the planting beds. I had finally found a nice young UConn Wedding Bells but decided it would be happier in a different planting bed, so this went back to being the ex-grasses bed again. (The new outlet had already died, supposedly because of some problem in the 100+ feet of buried electrical line between it and the house.) 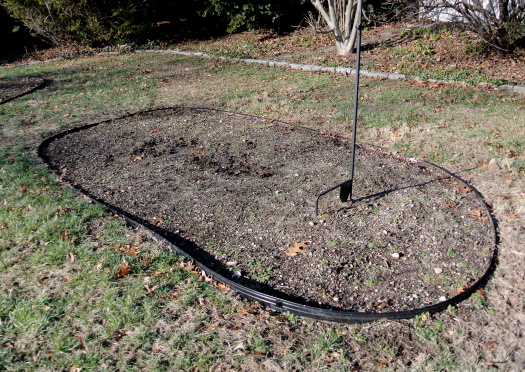 In December 2019 I had the faulty outlet eliminated, and all the backyard beds got new edging. Gazing from the kitchen window on a cold, gray winter’s day, inspiration struck. Wouldn’t it be nice to have the Ex-Grasses/Not-Silverbell Bed as a focal point for autumn and winter color? Especially since the afternoon sun would be shining through it and setting any colorful foliage all aglow. What a great idea!!

I worked up a quick list of likely plant candidates. I’d had Enkianthus cernuus v. rubens in my previous garden and knew that its foliage will glow like a bonfire with backlighting; Fothergilla ‘Mt. Airy’ was a given also. Dwarf conifers would be represented by Thuja ‘Morgan’ which goes from clear green to bronze in the winter. Naturally I’d have to make room for Calluna ‘Blazeaway’, Nandina ‘Firepower’, Erica darleyensis ‘Goldrush’, Ceratostigma willmottianum, and of course some bergenias. And all lit up gloriously by that western sun. What a wonderful kitchen-window view that would be! 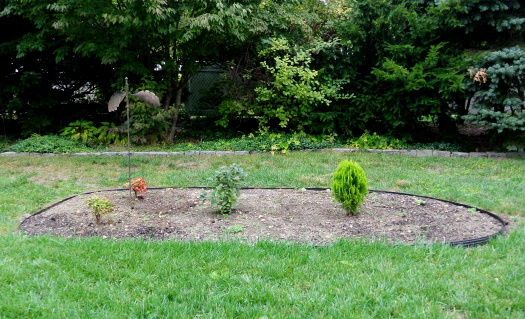 I was able to find the Fothergilla, thuja, and two Firepower in 2020; the wind spinner serves as a placeholder for the elusive Enkianthus. The pandemic threw many nurseries into disarray, which is why the other plants had to be postponed until 2021. This was taken in September 2020. 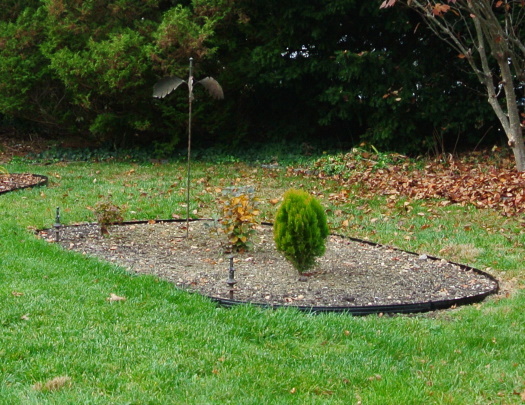 In early November I realized that although the foliage on Mt. Airy had begun to change color, it wasn’t really noticeable from the kitchen window. Or from the patio outside the window. Or from any other spot when looking due west in the afternoon. Nothing was glowing, nothing was turning into the envisioned “pillar (or even puddle) of fire.” Where, oh where, was the afternoon backlighting upon which my entire Autumn-Winter Color planting plan was based?? 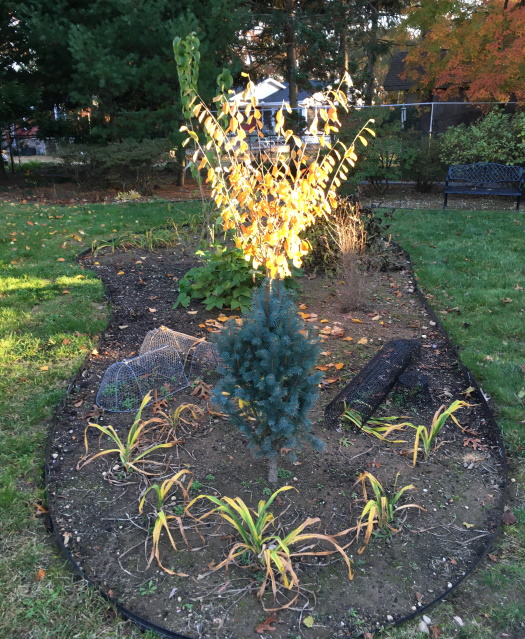 Well, I found it – between 3:30 and 4 pm on every sunny day, to be precise. It was doing a fabulous job of lighting up the Hamamelis ‘Arnold Promise’ in the Four Seasons Bed which is on the other side of the garden. That’s a bed that is NOT visible from the kitchen window. At all. Ever. 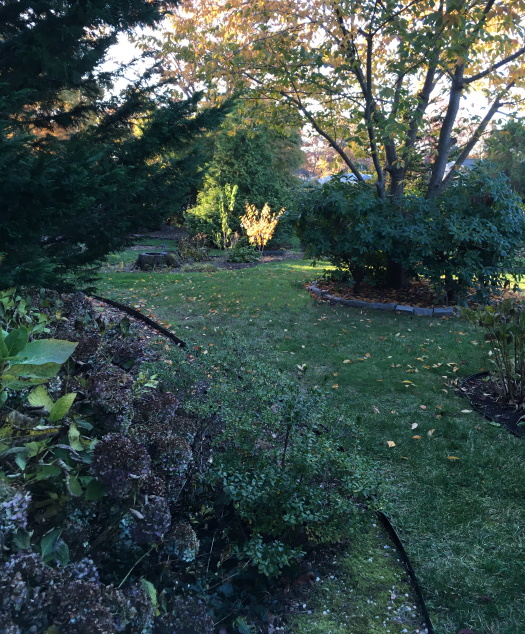 I do have a great view of the backlit Arnold Promise if I happen to stand at one particular spot at the entrance to the backyard on the southwest corner of my house.  Where there is, of course, no window view. Or even a place to sit. Murphy’s Law.

What I’d completely failed to notice, during the SIX autumns and winters that I had spent looking out of my due-West-facing kitchen window, was that the afternoon sun only provided backlighting to that bed for part of the year – and that part was NOT during the autumn and winter! Yes, the sun sets in the West…but only in the “true” (due) West on two days a year: the spring and fall equinoxes, March 21st and September 21st.  How did I not realize this?? I had been looking out of the window, but not seeing what was actually happening with the sun.

Mentally dividing my backyard in half vertically, with my due-West facing window as the midline, would have immediately shown me that the ‘autumn-winter’ bed sits well on the north side of center. During the summer, the sun actually sets north of due west; any foliage in that bed would indeed be backlit on summer afternoons (as I remember the large grasses were.)

But after September 21st the western sun begins moving toward the south, so that by November it is not behind that bed at all. The bed with the witch hazel is on the south side of the backyard, which is why its fall foliage gets spotlighted by the now-relocated setting sun. In five weeks, the backlighting will begin to shift toward the center again…but by the time it backlights my “Winter Interest” planting, it will be spring!

Now that I know when the maximum ‘backlighting effect’ will occur (May, June, and July) I am rethinking what this bed will be. There will be some backlighting in April and August, for sure, but I can’t count on any after mid-September. So, the Firepower may well get shifted elsewhere, as may the Fothergilla to a bed that is toward the south but still visible from the kitchen window (if I can find such a spot.) The Thuja will stay put, because it’s happy there. The question now becomes: What foliage looks especially interesting during late spring and summer, when backlit?

I have several candidates in mind, so stay tuned! 😊

2 comments for “The (Not Quite) Best-Laid Planting Plan”