Today we’re all too familiar with PPE: face masks, plastic shields, disposable gloves, hand sanitizer, etc. Hopefully, we’re all stocked up on those – but what about the other kind of PPE? I’m talking about Plant Protective Equipment, which is something else I never needed until that fateful year, 2020. In this case, my enemy is quite visible: The Ravenous Rabbit.

For most of my life I thought rabbits were cute. As a child, I thought Mr. McGregor was a meanie for harassing poor Peter; my best friend had an adorable pet “mini-lop” named Bogie; and I not only own a well-thumbed copy of Watership Down but I’ve watched both movies (btw, the Netflix version is better.) There was even a long-running family joke about “seeing rabbits”, which is one of those things that lose 99% in translation and so I won’t even try. The only problem-creatures that ever set paw into any of my first three gardens were squirrels, and once I learned that it was futile to plant tulips or crocus (and gave up on the bird feeder), no big deal. I liked rabbits. Such adorable furry things with their big ears and cute little twitchy noses and cotton-ball tails. Awwww.

That all changed when I began to work on my current garden in earnest.

I would occasionally see a rabbit in the yard during the first few years here but it didn’t matter because (a) I was looking to sell, and (b) I disliked all of the grossly invasive perennials that the former owners had planted. If a rabbit appeared, so what? Who cares? In fact, I’d cheer it on: “Hey there, bunny, please eat some more of those dandelions! Have a few more tiger lily buds for dessert, why don’t you? Bon appetit!”

Remember my baby tree peonies, back in 2017? This brief skirmish should have sent my antennae up, but after the peonies were transferred to pots and moved elsewhere, I stupidly forgot about the interlopers.

After all the unwanted plant material was removed in 2019, it was just dumb luck that the first things I planted were either conifers or shrubs almost 3 ft tall. That’s why I didn’t realize that the Ravenous Rabbit who frequents my garden was now likely to develop gourmet eating habits. The dandelions and other weeds were still in the lawn, mind you, but now there were new goodies on offer. I looked out of my kitchen window one summer morning and realized that a rabbit was closely inspecting the 10”-high dwarf Japanese cherry ‘Kojo-No-Mai’ that I’d planted two days before. By the time I dashed outside, shrieking like a banshee, the poor Prunus was completely stripped naked except for one lonesome leaf. That’s when I realized that I needed some serious PPE to bolster my odds in the standoff between me and The Ravenous Rabbit.

I made the mistake of actually naming my nemesis before I realized that she is a furry Terminator. For some reason she looked like an Abigail to me. (No idea why, because I’ve never known anyone named Abigail.) She is a formidable foe, and here are the lengths I’ve gone to in order to keep her from destroying my 2020-acquired treasures. (USA sources in parentheses) 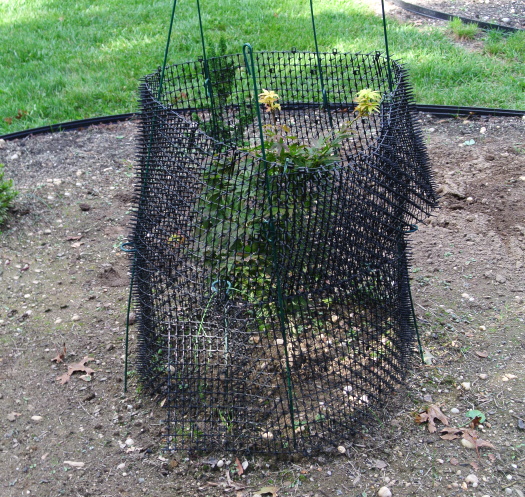 May 2020 saw the first of my two want list Japanese maples, ‘Mikawa Yatsubusa’. “Mick” was only about 15” high and thus prime rabbit-fodder. He was immediately wrapped in two lengths of Cat-Scat Mat with the spikes facing outward. No intelligent rabbit is going to stick its tender little twitchy nose into that more than once.
(Cat-Scat Mat in 11” x 78” rolls – Gardeners Supply, Lee Valley Tools, and various vendors on Amazon)

When in August I bought the other maple, ‘Ikandi’, it was not quite ready to come out of its #2 pot and had also spent its life thus far in a shade house. So, it had to be moved from place to place in the garden over a period of weeks, gradually increasing the sun exposure with each new location. I was taking no chances with this pricey baby and had invested in some chew-proof mesh netting and special stakes to attach it to. For good measure, I also wrapped the pot section with Cat-Scat!

In late September it was time to put it in the ground. By then I needed the Netting for other things, so upgraded the PPE to three critter-proof fence panels. 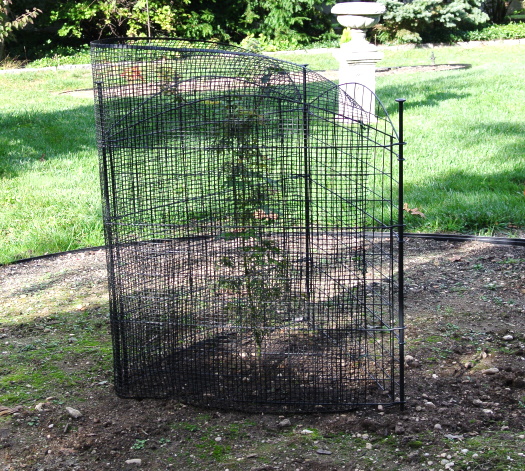 This spot is in full sun most of the day, so I added a section of the chew-proof netting on the south and west sides, figuring that an extra section of PPE can’t hurt and actually provides a smidgeon of shading as well.
(Gardener’s Supply chew proof plastic hardware mesh and separate stakes)
(Gardeners Supply offers the critter fence in 4-panel, 5-panel, and 6-panel versions. The six-panel one is the most expensive and has one hinged panel that creates a gate; the other two do not.)

Mini Gingko ‘Troll’ inside two of the chicken wire cloches from Gardeners Supply that once protected the baby tree peonies.

Originally, I rigged up three of those same cloches around the previously-eaten Prunus incisa ‘Kojo No Mai’ but when Gardeners supply came out with an additional cloche design this autumn, I switched it to this. The challenge is to be able to come up with a shape and size that works for each individual shrub without allowing any of it to peek out into rabbit-danger territory. 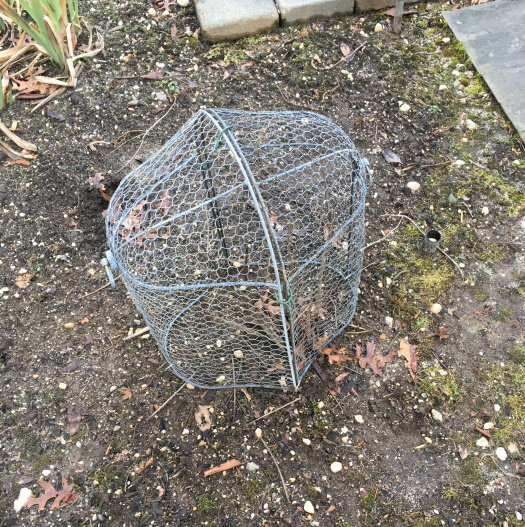 Tree peony ‘Kamata Fuji’ in what I hope is its final location. The poor thing has been moved three times in the past two years and is probably completely disgusted with me.

The largest of the three surviving seedling tree peonies (“Porthos”) behind a section of cat-scat mat temporarily protecting a small group of recently-planted Eranthis bulbs from being dug up by squirrels. Just in case.

A just-planted shrubby clematis (‘Stand by Me’) protected by an upended wire basket from the local dollar store.  Clearly this will need something taller as it starts into growth this spring. In front of it is another of the baby tree peonies (“Aramis”) who got caged a few minutes after I took this photo.

Small black-vinyl-coated wire baskets are sold at Dollar Tree for $1 and are handy to cover very small perennials like this miniature hosta. These are just about 8” in diameter and 4.5” high, and are cheap enough to throw away when they eventually rust out, as I assume they will. You can buy them as a box of 36 on their website but in that case, they send 50% of them in black and the other 50% in white. If you want just the black ones, you have to buy them in the store. 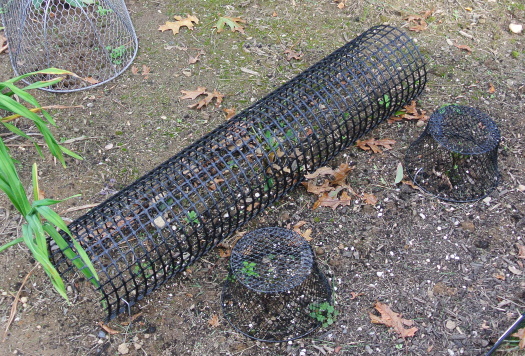 Within 24 hours after planting out two small groups of Echinacea in early October, Abigail had eaten them halfway to the ground. The Dollar Store baskets now cover the two smallest ones while some temporary protection is afforded the others by a narrow tunnel of rigid plastic mesh trunk guard.

More of the Gardeners Supply cloches cover the other group nearby.

Two of the trunk guards fixed in position to protect all parts of Disanthus cercidifolius ‘Rikyu’. These come from A.M. Leonard and are sold in a pack of 5 (why not 6?) They come in 24”, 36” and 48” heights. 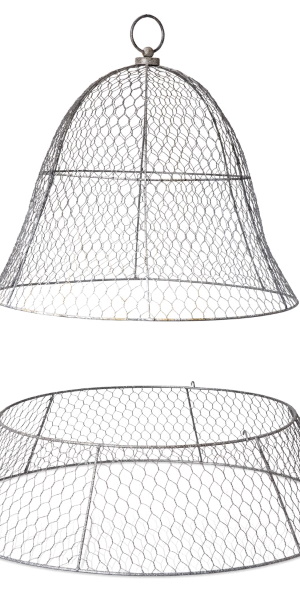 I also have two of these on backorder from Gardeners Supply for midsize individual plants or dwarf shrubs. Most, but not all, of the items on the Gardeners Supply website are also on Amazon.

All of the PPE is secured with a combination of garden staples on the bottom plus whatever type of vine clip works with the openings of the material in order to hold the sections together.

I was forcibly reminded last week that the price of freedom is eternal vigilance. 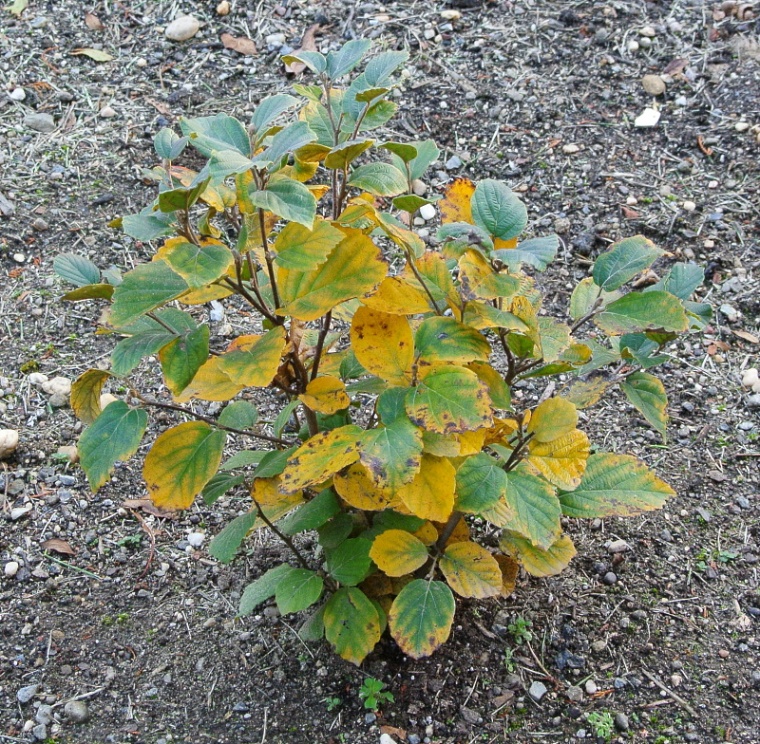 This is my young Fothergilla ‘Mt. Airy’ in early November. I have had fothergilla in my previous two gardens and never had any critter touch them. But that was there and then…. 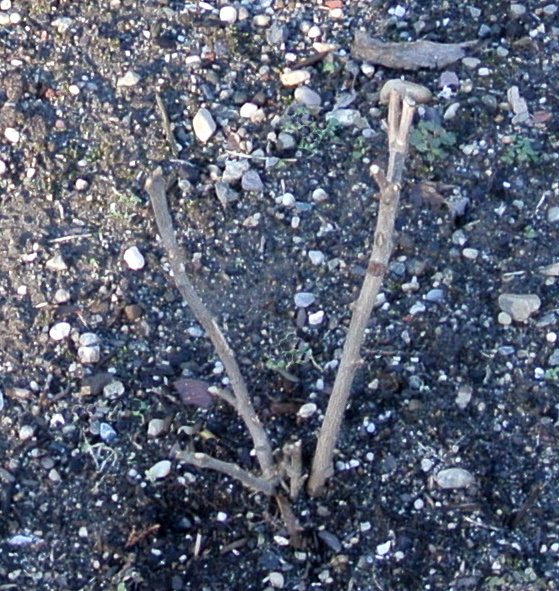 …. this is what I discovered after a recent snowfall. 😦

In the spring, this will be moved to another location in order to spend the next several years recovering from Abigail’s butchery and my stupidity. At least I know she won’t be able to get to it in the meanwhile.

After adding that latest bit of PPE recently, it occurred to me to also protect the very small, young witch hazel sapling that I’d also acquired last summer and put into a choice spot in the front yard. The last time I looked at it, it was 12” high. But there’s no photo here, because there’s nothing to show: It has been eaten right down to ground level. Clearly, PPE is just as important for our prized plants as it is for us!

← Favorite Cat Memes: New Year’s Edition
Vintage ‘Joy’ Jewelry: Who, When, and Where? →

2 comments for “PPE versus The Ravenous Rabbit”