Orchids were a favorite Connoisseur floral subject and figured in more than a dozen of their limited- and non-limited-edition sculptures during the 1980s and early 1990s. The examples below are shown in chronological order by introduction year; studies for which that year is currently unknown are shown at the end.

The White Cymbidiums group appeared in 1985 as an edition of 100; dimensions are 8″ high and 13″ wide.  The open edition Pink Cymbidiums, showing two blooms, was also issued the same year. 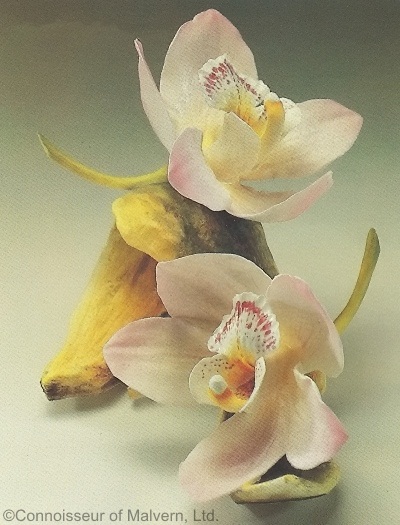 Phalaenopsis have always been one my favorite orchids, and Connoisseur’s Phalaenopsis Orchid Group is a particularly appealing one, with its pink-blushed white blooms. This limited edition of 10 appeared in 1985. It is 6″ high and 10″ wide.

The single-orchid-bloom studies were deservedly popular and the Green Orchid was no exception. This study opened in 1985 and is 6″ high.

Purple Moon (single) was introduced several years later, in 1989. Note that the name specifies single to distinguish it from the earlier limited-edition sculpture of the same name. I did a quick search for the actual hybrid ‘Purple Moon’ on the RHS/Sanders List site but the only result was a dendrobium…. nothing for a Cattleya ‘Purple Moon.’ 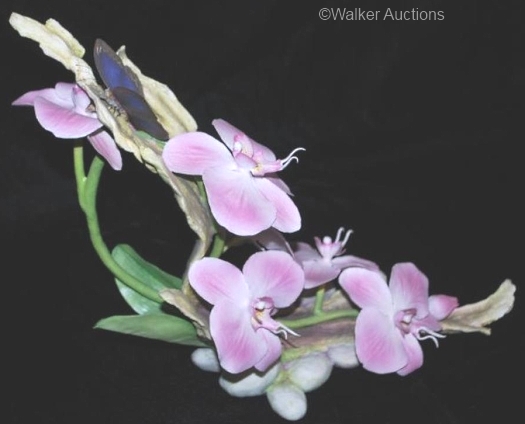 Pink and Free is a study of pink phalaenopsis orchids from 1988. This issue of 100 is 11″ high. Unfortunately, the deep blue butterfly (perhaps Cupido minimus, known as the Small Blue) is not seen to best advantage in this photo.

Silent Eloquence is a stunning 1989 orchid group designed by Diane Lewis. The white orchid is a cattleya; the striated flowers are phalaenopsis. Only 50 of these were made. It is 12.5” high. 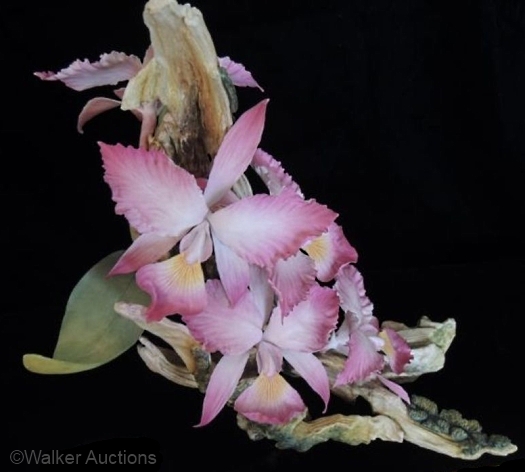 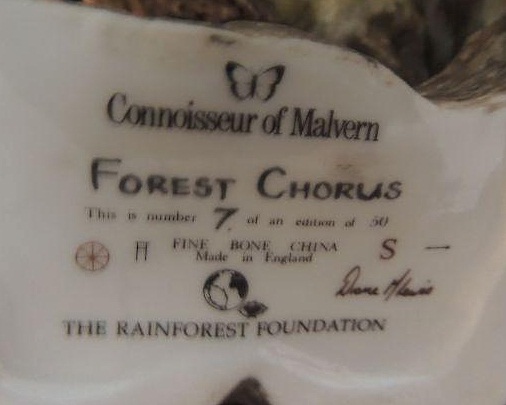 Forest Chorus is a cattleya orchid group that was issued in an edition of 50 as part of the 1990 Rainforest Foundation series. The backstamp, like all pieces in this special series, also includes the Rainforest Foundation’s name and logo. This piece is approximately 16″ high. Cattleyas, being epiphytic plants, grow on tree trunks and limbs just as they are depicted here.

The introduction year of the following pieces is unknown, either because I do not have a photo of the backstamp, or because it is not shown there. 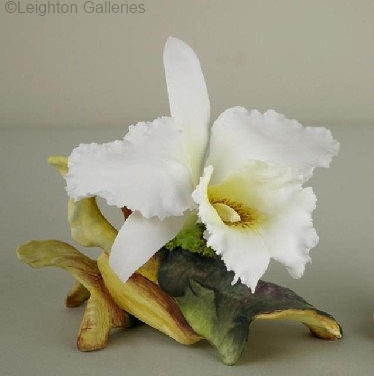 Cattleya Bow Bells is a tribute to one of the true classics of orchid breeding. It was first introduced to the world in 1945 at an American Orchid Society meeting but the cross was developed by the British orchid firm Black & Flory. They named it ‘Bow Bells’ after the bells of Saint Mary-le-Bow church in London. This non-limited edition is cast from the same mold as the Purple Moon (single) shown above.

This photo gives a great view of the structure of the sculpture. It is 5” high, 7” long and about 5.75” wide.  However, I have not yet located a photo of a corresponding limited-edition Bow Bells by Connoisseur.

The limited-edition group titled Tropical Dawn Orchid is taller than some others at 10.5″ high. An edition of 100, it may have had a corresponding single-bloom version cast from the same mold as Bow Bells and Purple Moon; however, the determination of whether a single-bloom Tropical Dawn was actually made by the original Connoisseur studio must await the discovery of one!

Two open blooms plus a bud are shown in the non-limited Pink Phalaenopsis Orchid study from the mid-1980s. It is 6.5″ high. 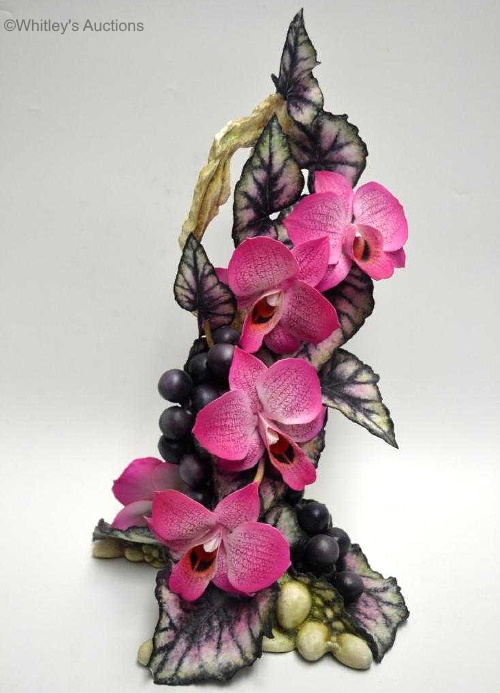 The first time I saw a photo of Orchid and Grapes, it was an online listing some years ago that had no photo of the backstamp and no issue details; the unusually intense coloring made me suspicious that it might be a non-original-studio piece. However, this example did include a backstamp photo which verified that this is indeed a Lewis-studio-era design by Diane Lewis and was painted by Tracy Arrowsmith. It is 15” high and has a 9” footprint. The orchid flowers are dendrobiums. 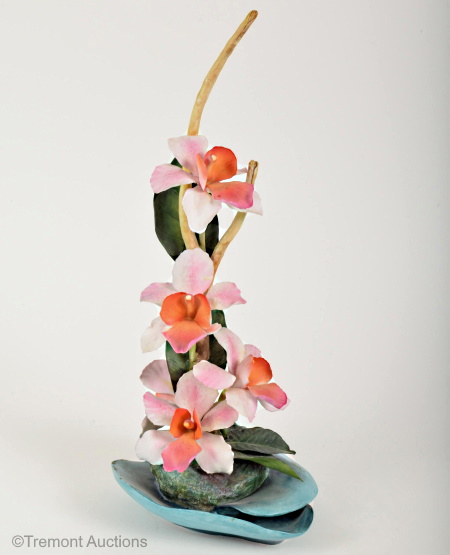 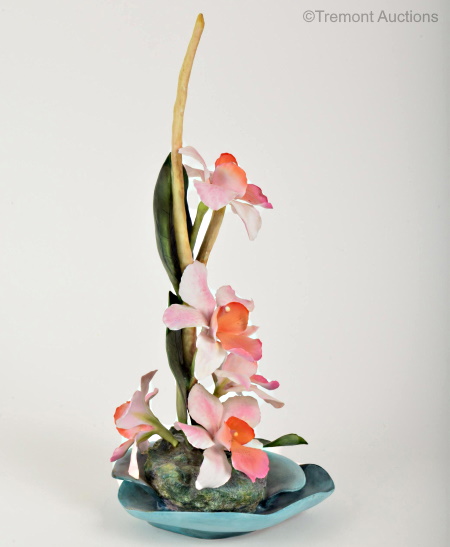 Exotic blooms are also featured in Oriental Pride which is also a Diane Lewis design. It was an edition of 50 but the issue year was not contained in the backstamp. Height is about 14.5” and 5.75” at the widest point. 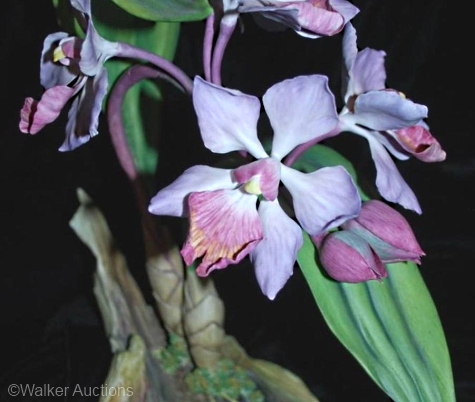 Unfortunately I have only this partial photograph of this orchid study called Matinee, which was a limited edition of 50 (year unknown.) As a former orchid grower, I’m embarrassed to admit that I can’t quite pinpoint the species although I’m determined to work it out eventually!

If anyone has photos of any Connoisseur of Malvern orchid study that is not shown here, I would love to add them to this post; there is a contact form on the About the Chatsworth Lady page.

Browse my other Connoisseur of Malvern posts