The Connoisseur studio created a marvelous group of porcelain studies focusing on butterflies; in fact, one series was called Butterflies of the World and was produced in collaboration with the Cecil B. Day Butterfly Center in Atlanta, Georgia.

Brimstone with Bluebells at 10″ high, was a limited edition of 200 in 1980. It is said that the color of the brimstone (Gonepteryx rhamni) was the original inspiration for the word “butterfly”, derived from “butter-yellow fly”. This little piece of fluttering sunshine is found in the UK, Europe, North Africa and Asia. 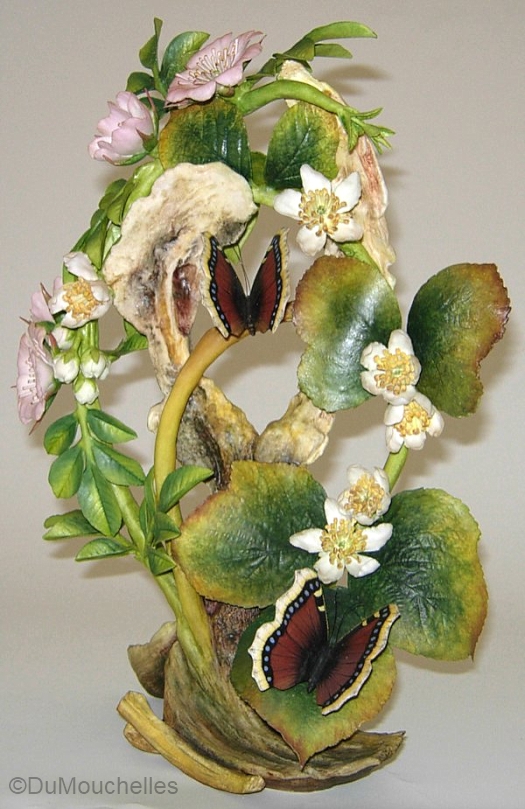 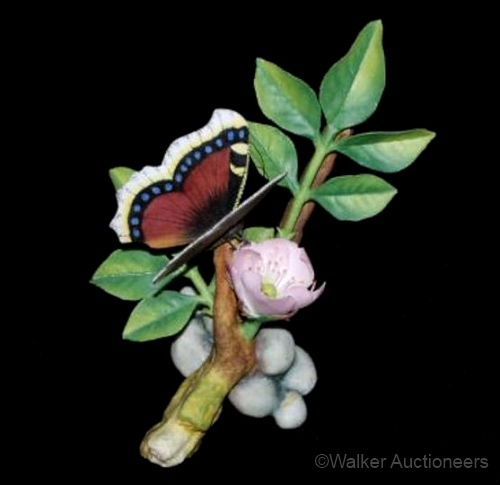 The stunning Camberwell Beauty butterfly is shown in two different sculptures. The larger (13″ high) study was a limited edition of 50; the smaller, non-limited version is about half that size. The backstamp on the smaller study indicates that it was designed by Diane Lewis.  The butterfly species is Nymphalis antiopa. From the British Butterflies website:

The Camberwell Beauty is named after its first ever reported sighting in Britain in 1748 near Camberwell in south-east London…. It is a large striking, magnificent butterfly which in North America is known [as] the ‘Mourning Cloak’. It is rarely seen in large numbers even on mainland Europe and sightings are normally brief as the butterfly is a strong flyer and tends to spend much of its life in the tree canopy.

What a lovely butterfly this is – no wonder it was named “Beauty”!

The Georgia Tiger Swallowtail is definitely a Diane Lewis design and was an edition of 100 in 1991.  It is 13.25″ high and 7.75″ wide. The Eastern Tiger Swallowtail, Papilio glaucus, has been the official state butterfly of Georgia since 1988. It is found throughout the eastern and central United States.  [The example in the photo has the following damage: missing butterfly wing, butterfly reattached to sculpture, and missing flower stamens.] 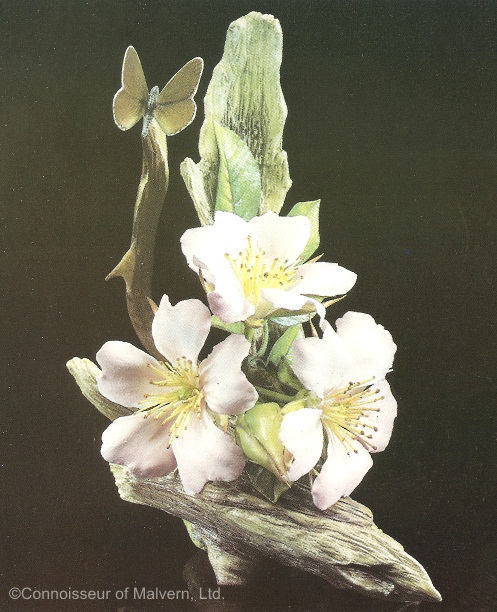 Green Hairstreak with Dog Rose from 1983 was an issue of 200 and is 6” high. The Green Hairstreak butterfly (Callophrys rubi) is found in the UK as well as most of Europe and parts of the Mediterranean.

Large Blue with Gorse was an edition of 200 in the early 1980s that is 6.5” high. The Large Blue (Maculinea arion) is a very rare butterfly, due in large part to its rather odd lifestyle: It spends most of its growth cycle within red ant nests, where it feeds on the ant grubs. When this sculpture was first issued, the Large Blue had recently been declared extinct in the UK, but in later decades it was successfully reintroduced from Europe. However, it still remains one of the rarest blue butterflies overall, and one of the rarest in Britain.

The Large Tortoiseshell with Oxlip was a limited edition of 100 in 1981 and is 6″ high.

This intricate sculpture is Monarch with Buddleia and dates from 1990. It is part of an edition of only 50. Similar in size to the Georgia Tiger Swallowtail, it is 13″ high x 7.5″ wide. Sadly, the example pictured above also displays several areas of damage. The Monarch butterfly, Danaus plexippus, is currently the subject of a lawsuit in the USA regarding its status as a potentially endangered species. In late 2014 the U.S. Fish and Wildlife Service acknowledged a decline of about 80% in Monarch populations and launched a review aimed toward classifying them as an Endangered Species; however, to date no determination has been made even though legally it is required to be done within 12 months. One of the several apparent culprits in the Monarch’s decline is the loss of millions of acres of milkweed plants (this butterfly’s larval food source) in the corn and soybean production areas in the Midwest.

Monarch on Buddleia was an open edition that appeared in the 1993 issue of Brielle Galleries’ retail catalog. Its introduction year is unknown but it may well have coincided with the limited-edition Monarch with Buddleia above. It is 4″ high. 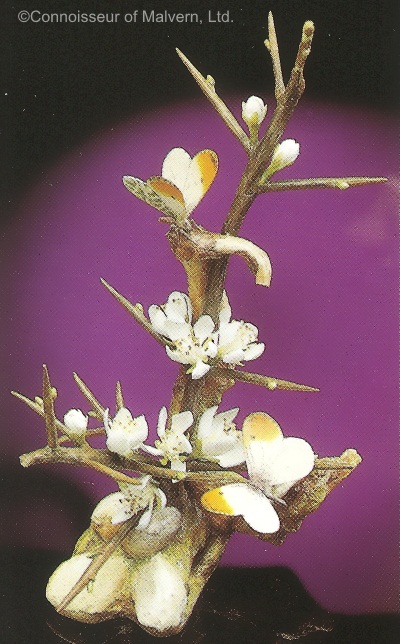 This study is Orange Tip with Blackthorn. An edition of 200 in 1980 that is 8.5″ high. The charming Orange Tip (Anthocharis cardamines) is a familiar sight in Britain during the spring and early summer. Only the males have orange on their wings; females are white with black wing tips covering a smaller area than the males’ orange. A somewhat similar species called the Pacific Orangetip is found in California. I would like to have found a better photo of this piece; the image above is scanned from a Connoisseur brochure.

Connoisseur’s butterfly studies are, of course, floral studies in equal measure. I am endeavoring to discover a complete list of their Butterflies of the World series to determine which sculptures were included in it and which (if any) were not. There are certainly more of their butterfly studies remaining to be added to this page!

Browse my other Connoisseur of Malvern posts

← Favorite Cat Memes, Part 10
Stem Research (or, Why Does My Campanula Look So Weird?) →