My overview of Connoisseur of Malvern’s porcelain bird studies will be divided into three posts, this first one focusing on the categories that I personally consider to be the most magnificent of their ‘birds’ genre.

The incredibly talented sculptor Christopher Ashenden designed almost all of Connoisseur’s birds as well as most of their animals.

RAPTORS (Falcons, Owls, and an Eagle) 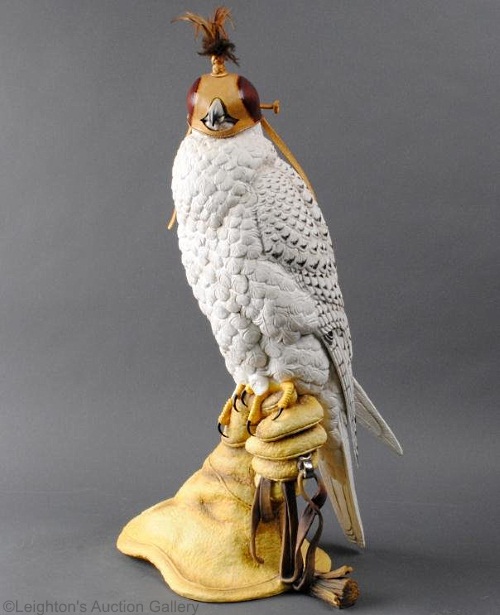 Falconry (the practice of hunting using trained raptors) is a sport that goes back thousands of years. Gyrfalcons (Falco rusticolus) were often used as hunting birds during the Middle Ages and were particularly prized. Chris Ashenden’s stunning Gyrfalcon is shown patiently waiting on the falconer’s gauntlet. He is an impressive 20″ high. These photos show the study complete with the removeable leather hood; any examples seen without the hood included are not mint as originally produced. 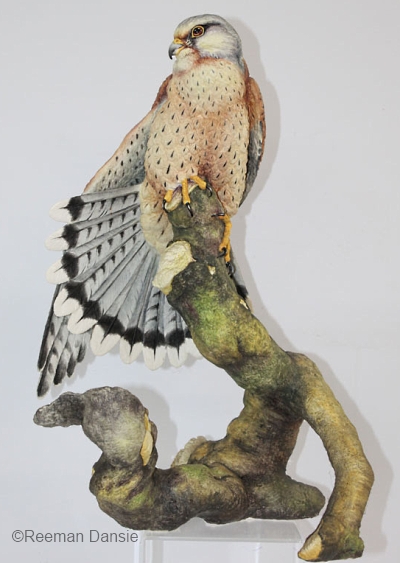 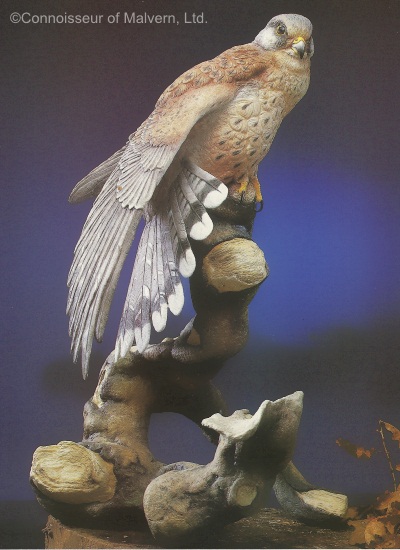 Another raptor, the Kestrel stands 20 inches tall, 14″ wide and 13″ deep. It was an issue of only 25 sculptures in the USA; however, there are examples in the UK with an accompanying certificate citing an edition size of 50. Also known as the sparrow hawk, the kestrel is one of my favorite birds; if you feel as I do, you might enjoy my post that looks at how various porcelain studios portrayed them. 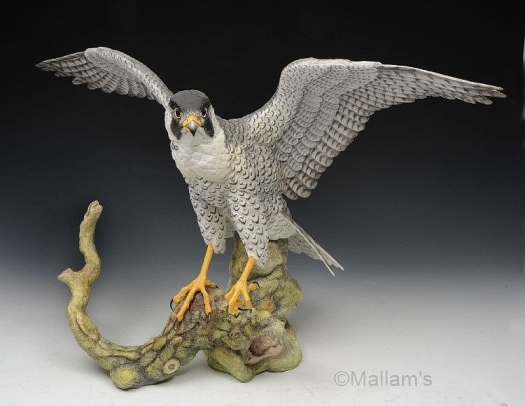 Chris Ashenden always did a fantastic job with raptors, and his Peregrine Falcon is no exception. A 1983 limited edition of 25, it stands almost 19” high and has a 30” wingspan.

Showcasing one of my favorite owls, the Barn Owl with Fledgling is 12” high and was an edition of 75 in 1980.

Another of my very favorite birds (I do seem to have a lot of them!), the diminutive Saw-whet Owl is captured in mid-flight as a limited edition of 50 sculptures. This piece is 14” high and displays a wealth of detail.

His larger cousin the Tawny Owl was a limited edition of 100 standing about 15.5” high and came with a wood base as shown in the upper photo.

This study of America’s national bird, the Bald Eagle, was a 1989 issue of only 20 sculptures standing 19” high and with a 21” wingspan. 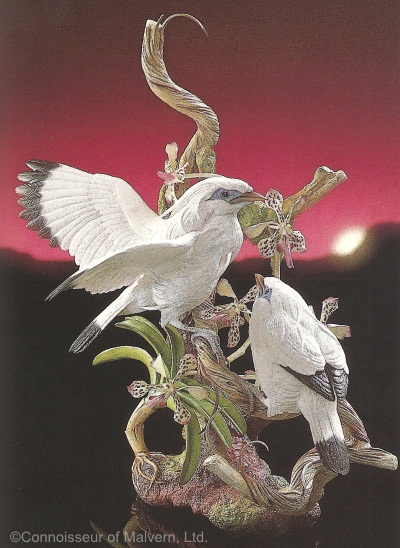 The 1981 sculpture Paradise Lost features one of the world’s rarest birds: Leucospar rothschildi, also known as Rothschild’s mynah, Bali mynah, and white starling. It has become critically endangered due to poaching for the illegal cagebird trade, as well as having an extremely small habitat range. In 1990 only 15 remaining birds were counted; the introduction of captive birds has boosted the population somewhat – to approximately 70 — but the survival of this species is still very far from being assured. This amazing sculpture, of which only 15 were made, also shows one of the native Indonesian orchids. It measures 18″ x 17″ x 15″.

The brilliant (in all respects!) Hyacinth Macaw stands 29” tall and was a limited edition of 25. Not only is the bird absolutely amazing, but look at the incredible detail of the stamens on the pink tropical hibiscus; the white orchids are beautiful as well. This stunning piece has now taken over the #1 spot in my own personal (wish)list of “Most Gorgeous Bird Sculptures Ever”.

The Blue and Gold Macaw is another amazing parrot sculpture by Ashenden; it is 28” high.  This bird (Ara ararauna) is also known as the blue-and-yellow macaw. Unfortunately, I do not know the edition size of this study. 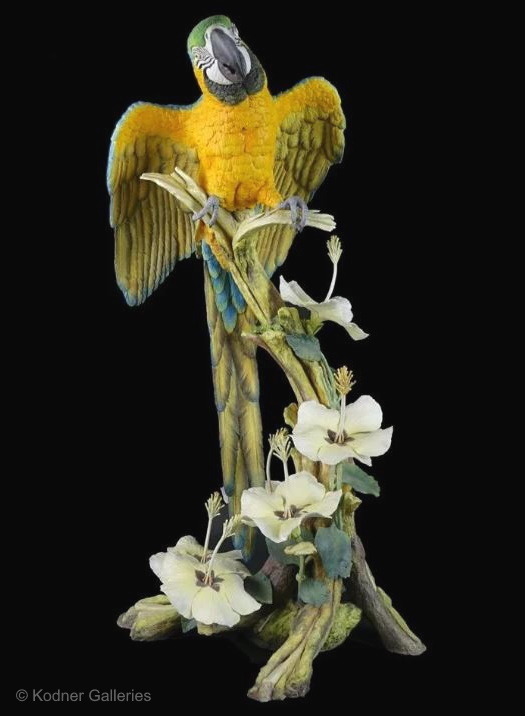 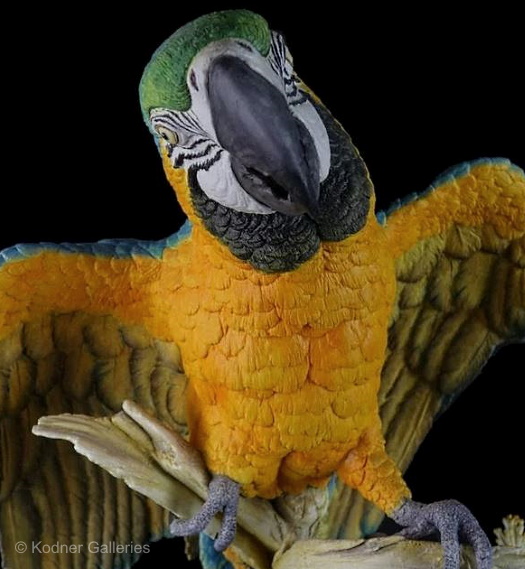 Shangrila also features the blue and gold macaw, this time with white hibiscus instead of orchids. This was an issue of only 5 sculptures in 1982. It’s no surprise that this is quite tall: 31″ high and 16″ wide and deep.

Staying with the macaws for a moment, this is Scarlet Knight depicting the brilliantly colored scarlet macaw, Ara macao. There are two subspecies which are identified by the color (whether blue or green) of certain wing feathers. As expected, this is another tall study at 28″ high; it’s also 12.5″ wide and about 18″deep. An issue of only 15 pieces in 1989. 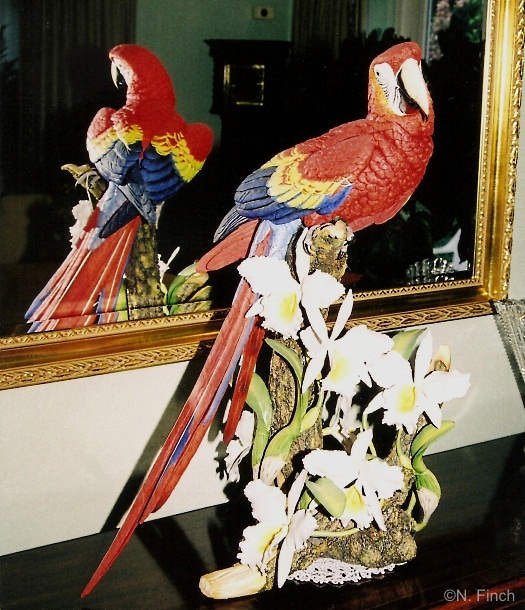 A reader kindly sent this photo of his Scarlet Knight very effectively displayed in front of a large mirror so that the amazing detail work on the wings and tail can be easily seen; many thanks!

Although more widely known for his equine and human studies, Richard Sefton’s Tropic of Capricorn was an edition of only ten pieces and designed exclusively for Brielle Galleries in 1980. It depicts an African grey parrot (Psittacus erithacus) with white cattleya orchids. Dimensions are 13.5″ high, 16″ wide and 14″ deep. 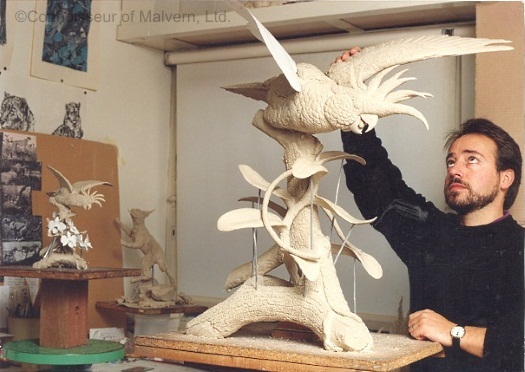 This marvelous photo of designer Christopher Ashenden also shows an unfinished Australian Sulphur Crested Cockatoo which was an edition of 25 during the 1980s. The smaller (maquette) prototype includes the phalaenopsis orchids that were part of the retail piece. 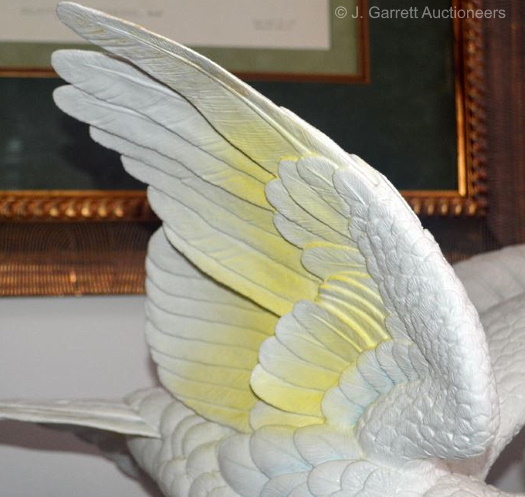 An example that came up for auction in recent years provided the finished dimensions of 27” high and 19” wide.

There was also a large 1980s study of three macaws perched atop a large branch or log that I hope to one day find an image of, and name for.

It’s strange that I have so far been able to find only five Connoisseur of Malvern studies of birds that are found either on or near water. I can’t imagine any reason why there wouldn’t have been more! 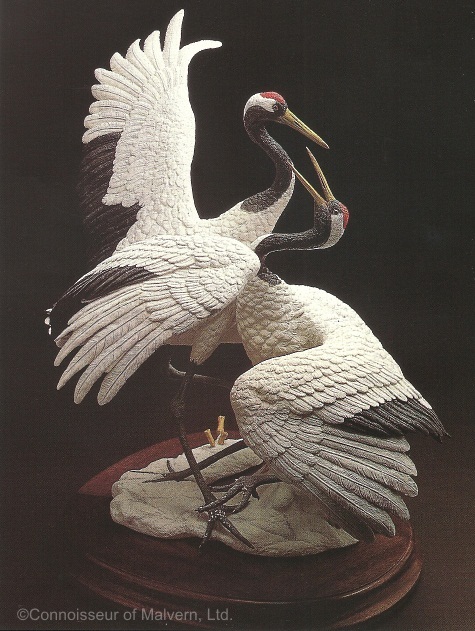 Dancing Wings can only be described as dramatic. This edition of only 10 sculptures was released in 1983. It stands 25″ high, 24″ wide, and 27″ deep on its walnut plinth as shown. These are Red-Crowned Cranes (Grus japonensis) which is also known as the Japanese or Manchurian crane. These are among the largest cranes, standing about 5 feet tall, and like some other large cranes they engage in an elaborate and graceful courtship dance. 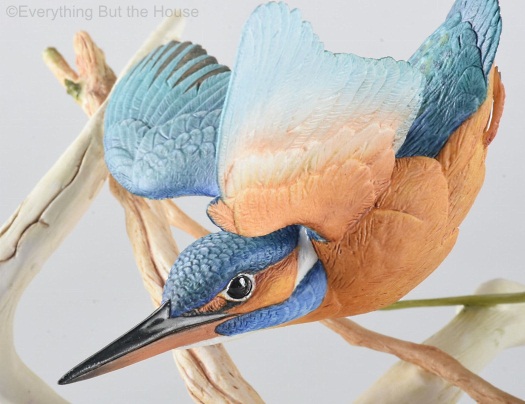 The Eurasian kingfisher, Alcedo atthis, is far more colorful than its American counterpart! Connoisseur’s Kingfisher is a 1987 limited edition of 50, designed by Richard Roberts and measuring 15″ high and 10.5″ wide. Unfortunately, the example shown above was noted as having “several broken petals and cracked grass.” 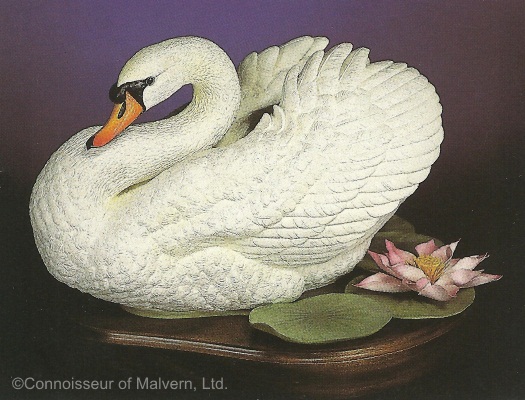 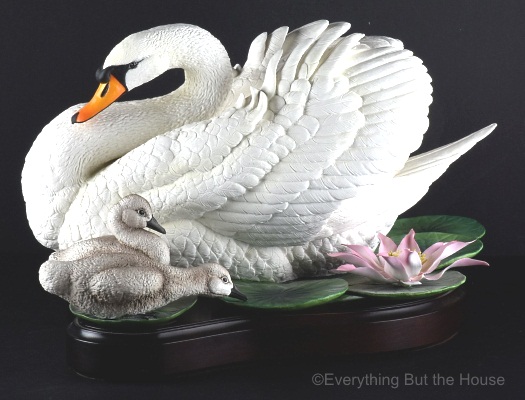 The Portrait of Peace swan was available both as a single adult swan (first photo) or as a group study incorporating two cygnets. This 1988 introduction was an edition of 50, but I don’t know if that number comprised both the with- and without-cygnets versions. It is 11” high but the width is not known. The group study’s base was enlarged in order to accommodate the addition of the cygnets. 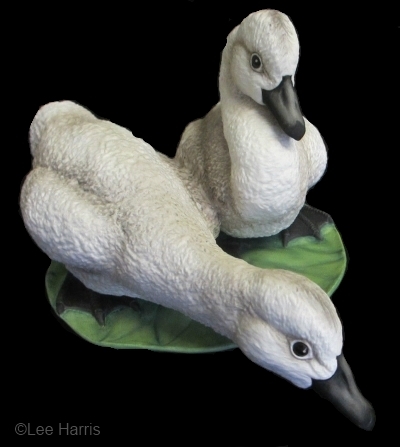 The Cygnets were sold as an open (non-limited) edition piece at the same time. 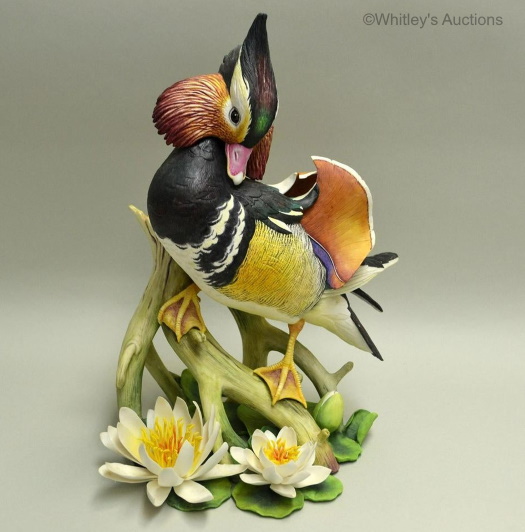 The Mandarin Duck, issued in 1990, was an edition of 100 designed by Richard Roberts and measuring 13.5″ high and 11″ wide. This duck, Aix galericulata, is only found in East Asia but it does have a counterpart in the USA: the Wood Duck, Aix sponsa, who is likewise a veritable riot of color. They are the only two birds in the genus Aix.

The next post will cover all limited-edition Connoisseur birds that are not (you guessed it) falcons, hawks, eagles, owls, parrots or water-lovers!