Here is a veritable aviary of limited-edition porcelain bird studies by Connoisseur of Malvern. Most were sculpted by Christopher Ashenden, although there are a few exceptions. The only limited editions not included here are the ones previously shown in my overview of their Raptors, Parrots and Water Birds.

I have sorted these by introduction/issue year from the first year of the studio’s operation (1980) until the last under its original ownership. Sculptures for which I do not currently know the introduction year are listed alphabetically at the end. Examples discovered in the future will be added to the appropriate section.

By the way, it’s not unusual to see a slight variation in some titles as shown on their backstamp versus in Connoisseur’s advertising literature, when it comes to “with” versus “on” – e.g., different examples or mentions of the same sculpture may be titled Blue Tit with Apple Blossom or Blue Tit on Apple Blossom. For consistency’s sake, I am using the ‘with’ format for all of those pieces. 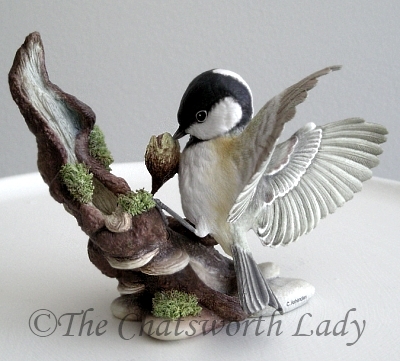 Coal Tit was a limited edition from 1980, standing 4.5″ high. Although it was sold as an edition of 300 in the USA, apparently there are sculptures marked as a limited edition of 50 that may have been sold in the UK only. It’s not known whether the edition of 50 preceded, was part of, or followed the edition of 300. The coal tit a close British approximation to America’s black-capped chickadee. Back in the days when bottles of milk were delivered to residential doorsteps, these birds were notorious for landing on the bottle tops, puncturing the top seal with their small sharp bill, and helping themselves to a delicious early-morning treat from the fresh cream at the very top. 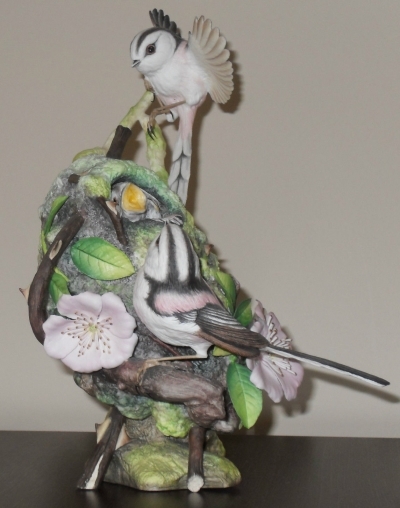 Long-tailed Tits with Young was an issue of only 75 sculptures in 1980, standing 11″ high.

Christopher’s Wren, circa 1981 and 16″ high, was an edition of only 25. This pair of wrens has set up housekeeping in an old teapot tossed away in a field. Whenever I see this sculpture’s name, I think of the famous British architect Sir Christopher Wren, although it is also most definitely ‘Christopher (Ashenden)’s Wren’! 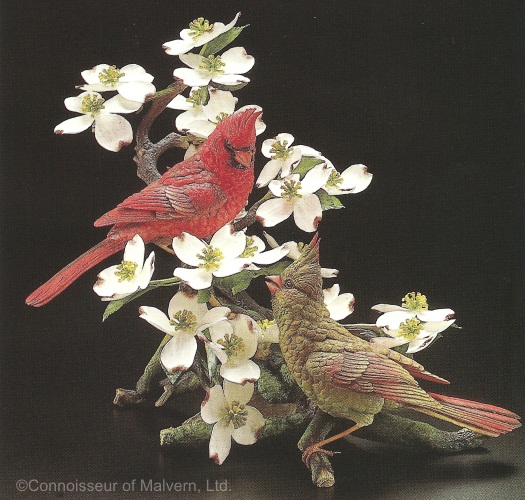 Crimson Spring is another Ashenden piece, standing 14” high. This was an edition of only 15 sculptures. The subsequent owner of the Connoisseur operation had the unmitigated gall (from a collector’s point of view) to have this piece reproduced offshore in resin as a “limited edition of 800” during the early 2000s. In a word: Ugh. 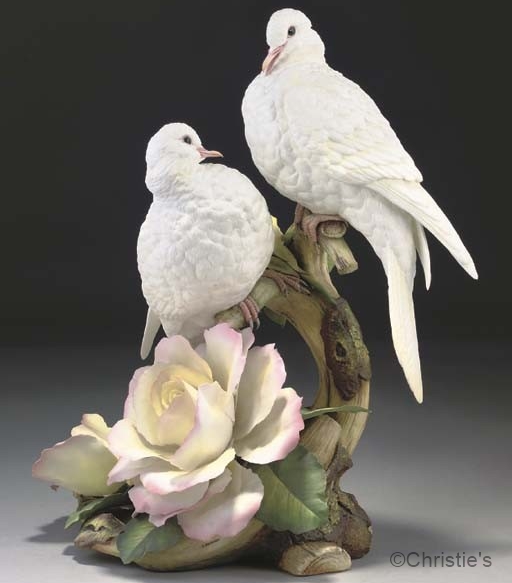 This romantic sculpture of a pair of white doves, entitled Love’s Majesty, commemorates the marriage of Charles, Prince of Wales to Lady Diana Spencer on July 29, 1981. It is a limited edition of 25 and is 14” high. The rose shown on the sculpture is the famous ‘Peace’.

Fledgling Wrens with Bramble, an issue of 100 in 1982, is approximately 8″ high. This is another original limited edition that the studio’s subsequent owner insulted by having it reproduced in large numbers in resin.

Fantail doves are portrayed in Peace on Earth. Twenty inches high and 26″ wide, this was a limited edition of only 25 sculptures. 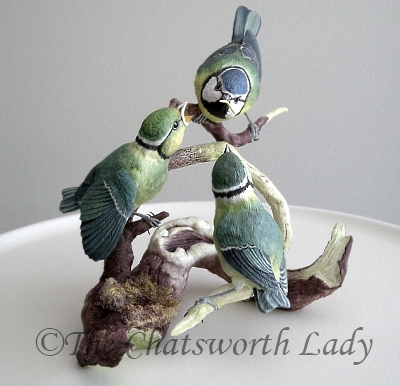 Blue Tit with Young was an issue of 250 in 1983; this is indeed a Chris Ashenden piece even though not identified as such on the sculpture.  It is about 7.5″ high. The parent bird is offering a tiny yellow caterpillar to the hungry babies.

A very limited edition (only 10 made) sculpture is Finches in Unison. Released in 1983, it is about 22” high. The birds shown are Zebra Finches and the flower is a white peony. See the limited-edition flowers post for the same structure but featuring flowers instead of birds. 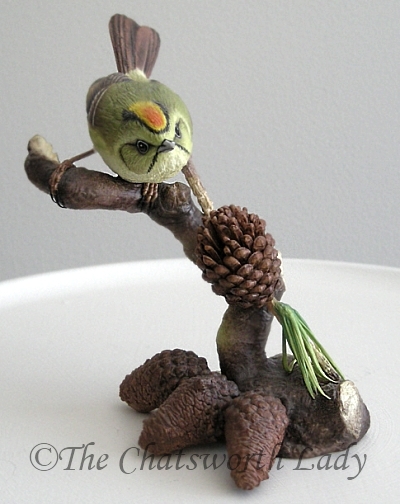 Goldcrest, an issue of 500 sculptures by Chris Ashenden. This spunky little fellow perches on a spray of pine having one mature cone and and three others which are in varying stages of development. The delicacy of the bird’s legs, feet and tiny claws is absolutely amazing. 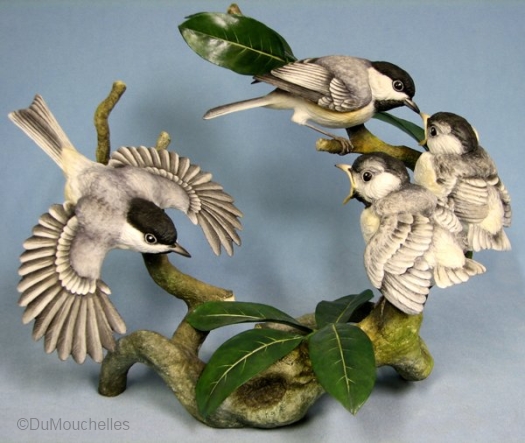 The Chickadee Family was created for Neiman-Marcus as a limited edition offering of 25 pieces in 1984. It measures 7.75” high and 11.5” wide. The backstamp identifies it as a store exclusive. An alternate name for this may have been Chickadee Family with Dogwood.

Mockingbird with Magnolia was an edition of 25 modelled by Chris Ashenden. This too was a Neiman-Marcus exclusive edition.

The delightful Redpolls with Apple Blossom was a limited edition of 50 sculptures and stands 12.5” high.

Willow Warblers with Forsythia was a limited edition of 25. This beautifully delicate study is 11.5″ high, and 10″ wide and deep. 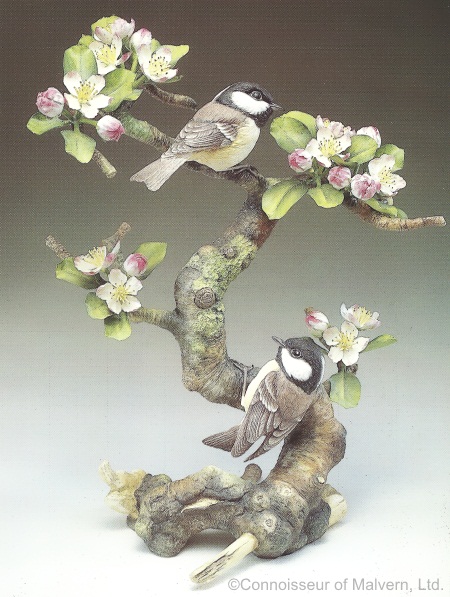 Another limited-edition songbird-and-blooms pairing was Coal Tit on Crab Apple in 1985. An edition of 50, it is 12.5″ high and 10″ wide at the upper portion.

This is the Great Tit, a limited edition of 100. It is 5” high. The flowers are pear blossoms. Although the Great Tit is Parus major and the chickadee is Poecile atricapillus, they are both in the same tit family.

Unfortunately, I have no vital statistics for the Blue Tit on Apple Blossom except for its introduction year being 1986. If anyone happens to have one and can send me a photo of the backstamp, I’d be delighted! There is a contact form on the About the Chatsworth Lady page.

First Kiss portrays a trio of Ruby-throated hummingbirds feeding from a pink fuchsia in marvelous detail.  One almost expects the birds to take flight at any moment! It measures 16.5” high and 13” wide and was an edition of 50.

Not every Connoisseur bird was sculpted by Chris Ashenden; the artist who created the Golden Oriental Pheasant was Richard Roberts. An edition of 50, it is 18″ wide and 8″ high on its cherry wood base.

The friendly British robin is again captured by Connoisseur with Robin in Springtime, an edition of 100.  Size is just about 6.75” high.

Goldfinch with Plum Blossom dates from 1987 and is a limited edition of 50, approximately 13” high. The bird represented is the European goldfinch, Carduelis carduelis.

Siskins with Winter Jasmine, an issue of 50 in 1988, 13” high. In some literature this is shown as “Siskins with Jasmine Blossoms” The jasmine shown is Gelsemium sempervirens; despite its species name (sempervirens literally means ‘evergreen’) it is only hardy in tropical and subtropical climates. These are European siskins (Spinus spinus) rather than the somewhat plainer pine siskin (Spinus pinus) found in North America.

This delightful study, Lovebirds with Quince Blossom, was also captioned in one of Connoisseur’s brochures as “Frolicking Lovebirds.” To add to the confusion, a contemporary retailer’s price list shows it as “Blushing Lovebirds”! I am awaiting a photo of the backstamp of an actual piece in order to confirm its official name. This limited edition of 50 dates from 1989 or 1990; sources differ, and I have no photo of the backstamp. It is 10″ high and 7″ wide. The species shown in Connoisseur’s study is the Red-faced (also called Red-headed) Lovebird, Agapornis pullarius; the oft-encountered cage birds are a different species, the Peach-Faced. 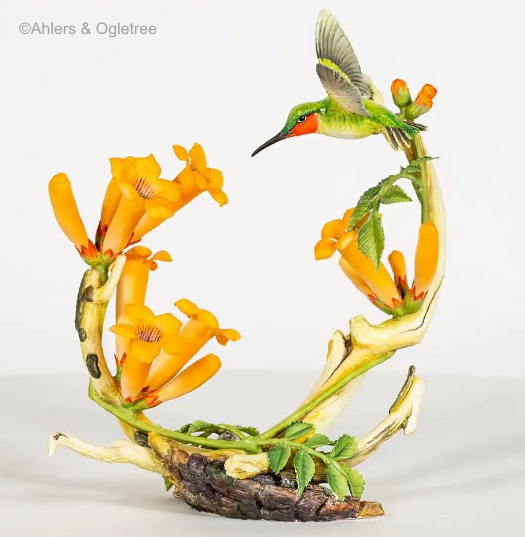 This gravity-defying study is the Ruby Throated Hummingbird with Trumpet Vine, an edition of 50 and measuring 10” high. Sculpted by Richard Roberts, it was a 1989 introduction

The 1990s are tricky because the sale of the studio took place in 1995. As always, the presence of artist icons always means that the piece was made by the Lewis-owned studio. However, pieces made in 1995 or later were not (with the exception of some of the Disney pieces which will be discussed in their own post.)  The bird shown below is an example of a Connoisseur piece that was introduced during the final year of the original studio’s operation.

The limited-edition Bulmer’s Cider Woodpecker was one of two promotional pieces that Connoisseur created on commission for the H.P. Bulmer company. This was a small edition of only 15 pieces. It is 9” high and with an equal wingspan, and about 7.5” deep.

Although the backstamp does not identify Chris Ashenden as the designer, I have confirmed that he did create both of the Bulmer pieces. There are no artist icons but that is probably a result of lack of space after the inclusion of the Bulmer identification elements; there is no place to fit a row of artist-icon decals on this small a footprint. A helpful reader recently sent a photo of the COA that Connoisseur supplied with the limited edition woodpeckers:

Unlike standard retail-edition COAs, this one includes the name of the original owner (P.D. Taylor.)

These may have been a form of annual corporate award/recognition at Bulmers. This theory is bolstered by the existence of a different limited-edition woodpecker produced for Bulmers by a different studio (Windmill) in 1997. That COA states that the same person (P. Taylor) was “awarded” that piece, rather than being a purchaser of it.

Further proof that the Connoisseur Bulmers Woodpecker was a corporate award is this example, whose COA mentions a different person (C.W. Beech) as the recipient of woodpecker #11. Many thanks to the helpful reader who supplied the photos of the Connoisseur and Windmill Studio woodpecker editions.

There was also a non-limited edition Bulmer Woodpecker which is a different design and can be seen in the post showing the non-limited-edition birds.

I do not know the introduction year for these sculptures, either because (a) I have no photo of the backstamp, or (b) the backstamp does not include the issue year and I have no dated price list or brochure identifying it as a new introduction. They are all definitely original-studio designs. 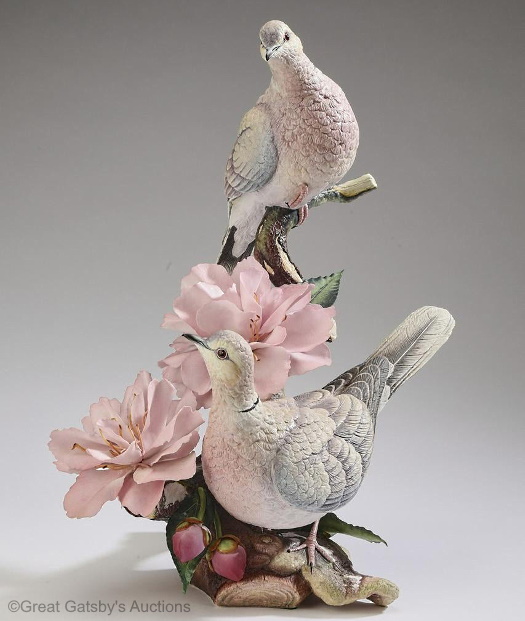 Devotion (Collared Doves with Camellias) was 16″ high and an issue of 25 sculptures. One can almost hear them cooing! This lovely study is particularly romantic in feeling and and also shows the camellia hybrid ‘El Dorado.’ 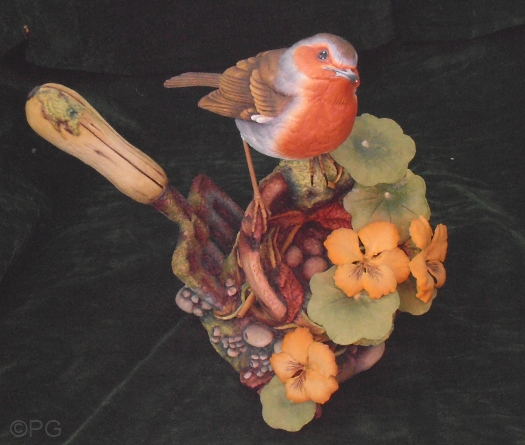 The beloved British robin is charmingly portrayed by Gardener’s Friend, a limited edition of 100 sculptures. This is likely from the early/mid 1980s.

Richard Sefton, who was best known for his equine and human portraits, sculpted this 19” tall, limited edition Toucan. Issue size and year are unknown. Native to the southern Americas and Mexico, toucans are distantly related to woodpeckers – easy to believe, given the size of their bills! However, although toucans do nest in trees, they do not use their bills to make holes; despite its ponderous appearance the toucan’s bill is very lightweight. These birds instead use nesting cavities previously made by other birds or forest creatures.

I am making an educated guess about the Yellow Headed Blackbird on Apple Blossom, because I have discovered only this one photograph which does not show it to best advantage. The seller did not provide any details other than the name, and so the issue year and edition status are a mystery. However, I am assuming that this is a limited edition, based on the title and style similarity to several of the mid-1980s pieces shown previously.

There were certainly many more limited-edition Connoisseur bird pieces, and they will be added here as discovered.