I was gobsmacked when I realized that it has been almost two years since I last accumulated enough ‘newfound’ Mystery Jewelry Maker examples to warrant an update post! That is, if one doesn’t count the March 2020 ‘Maybes and Wannabes’ overview. But there are now enough ‘new’ items (17) and one of them was rather unexpected. Let’s look at the bow styles first.

The MJM (Mystery Jewelry Maker) designs rarely included anything that wasn’t metal; this tailored bow with a pink glass stone insert is only the second such example seen. The same necklace with a turquoise-colored stone is in the Trio of New MJM Discoveries post. 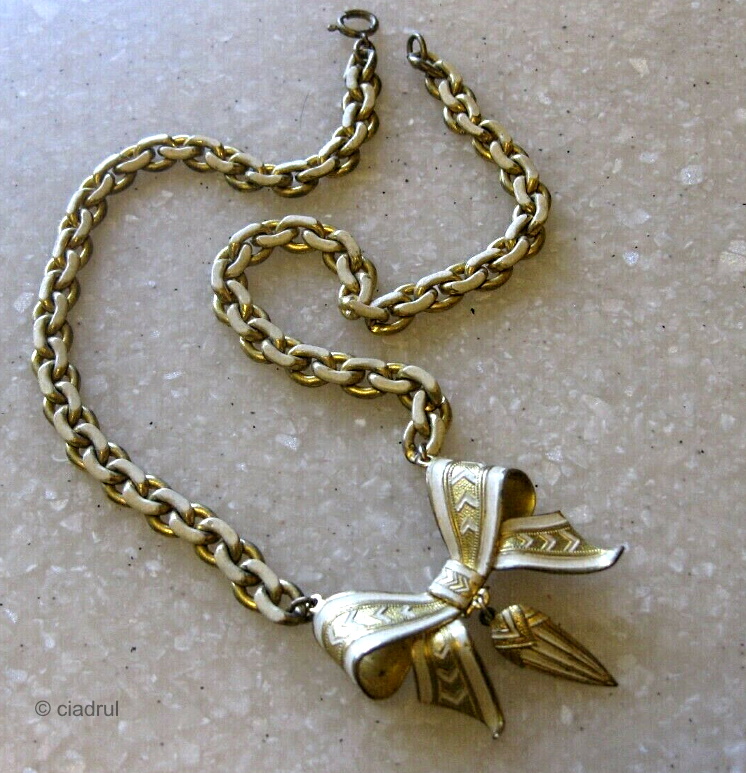 This is a newfound color treatment for the large-bow necklace: brass with white accents. I can’t say I’m a huge fan of the partial-painting of this chain.

Here it isn’t the colors that makes this a new find, it’s the plating/chain combo. I had only previously seen the brass (not silvertone) snake chain paired with this bow.

Next up are three new color combos in their painted-mesh line. I’d previously only seen this one in black and white, but here it is (and in excellent condition, too) in medium and dark green.

It’s rare to find an intact MJM necklace/bracelet set but here’s one in black on brass. I’d previously seen the same necklace on silvertone metal but this one is on brass. The bracelet is a different paint design also; the one previously found was indeed black on brass, and with this clasp, but not painted in the same pattern. The necklace is 5/8” wide and 15 3/8” long; the bracelet is the MJM’s standard 7” length and the same width as the necklace.

I have a special fondness for the MJM’s box-chain necklaces because my mom had one of them (which also launched me on my quest to discover who made it.) My mom’s necklace, shown in my very first MJM post, was red; this one is brown. To date, I have also found it in green and in blue (which I will kick myself forever for having missed when it was on eBay) and in plain brass with a different chain. The oh-so-Art-Deco pendant is 2.5” long from bail to bottom, and 1.5” at the widest point. The box chain necklace is 16” long. 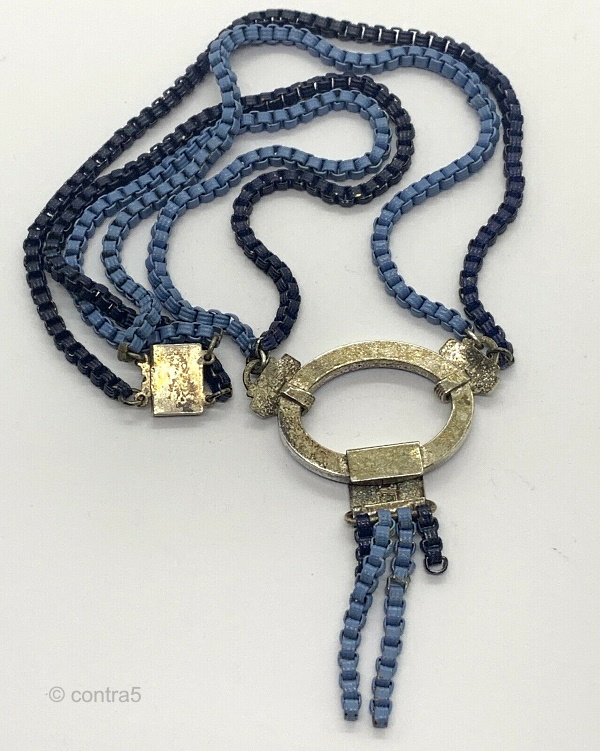 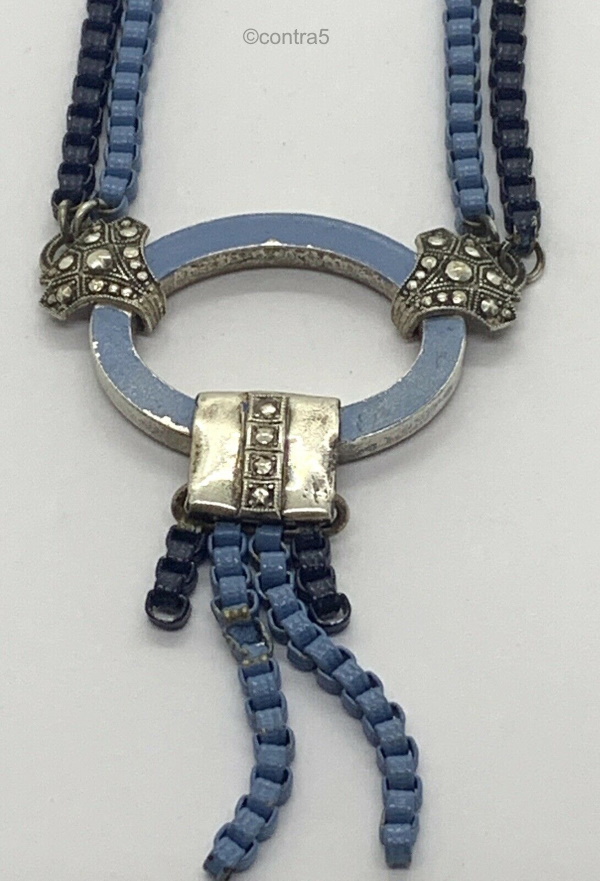 Similar in stye is this two-tone blue box chain necklace with an oval center station. Unfortunately there was not a good photo of it with the center station facing front. The cited length of 16” probably means the box chains only. I had previously seen one of these in the same colors but without the chain ‘fringe’ under the oval. Perhaps that part became detached from the other necklace?

Wow, talk about piling on the strands! Before seeing this listing, the highest MJM box-chain count I’d had was four – this one has seven, painted in autumn colors of brown, russet, and cream. I find it a bit hard to believe that the seller described it as being only 15 ¼” long – unless it’s the shortest/inside, rather than the longest/outside, chain that was meant. Either that, or the 5 was a typo. 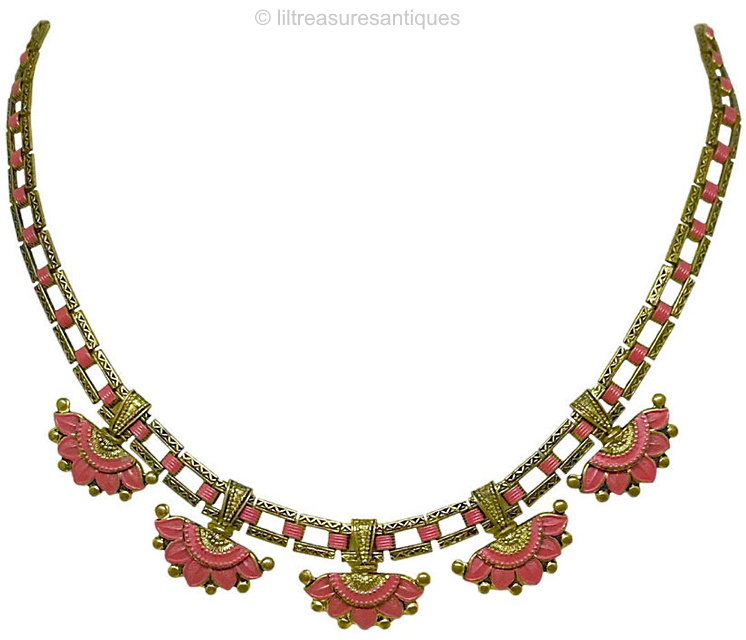 Yet another colorway for their lotus-flower necklace; would you call this Rosy Red, or Dark Pink? By any name, the paint is in excellent condition. 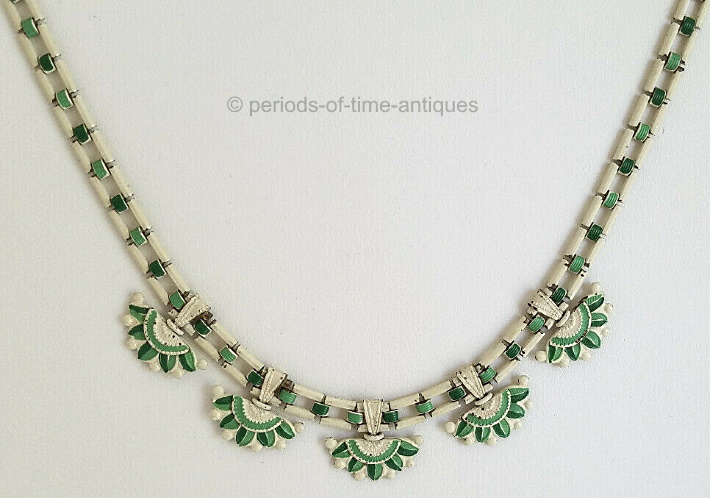 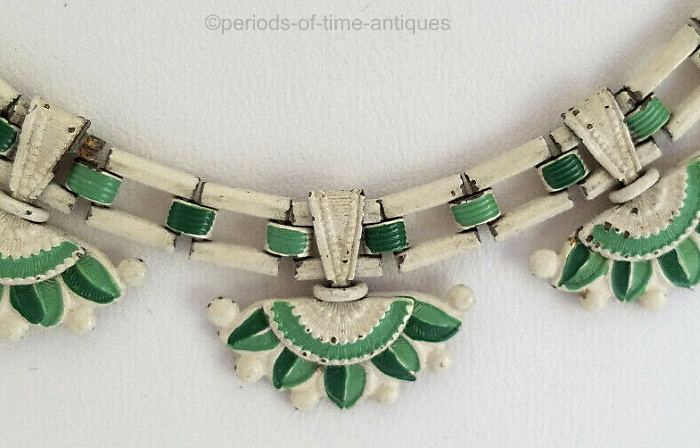 And here’s another newfound colorway: green and white, though unfortunately the worse for wear. But, after all, these MJM pieces are probably about 90 years old now. And, to paraphrase Yoda, “When 90 years old you reach, look as good you will not!”  [isn’t it the truth?!] 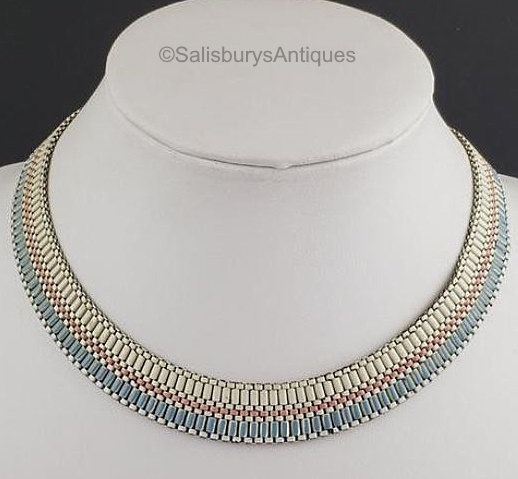 This pastel-painted watchband-style mesh choker, 15 ½” long and 5/8” wide, is as fresh as spring. I have seen this same combination of blue, pink, and creamy white on a couple of their box chain necklaces also.

The tubular-mesh-chain necklaces must have been among the least common MJM designs, because I’ve only seen a few. It appears to be a rolled version of their 5/8” wide flat woven mesh chain. Although it looks as if the center station could be a functional clasp, it is not. This is the only the second four-tubular-mesh-chain piece I have seen, and the other one (alternating red and white) didn’t have a center station. This choker is 15 1/2” long. 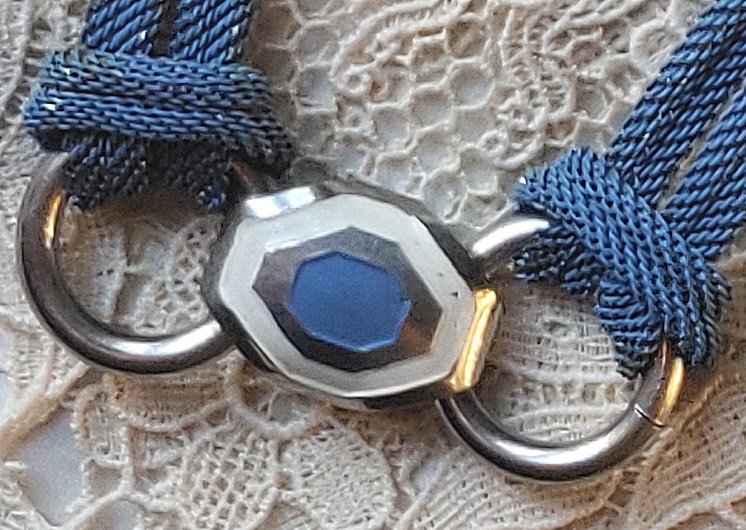 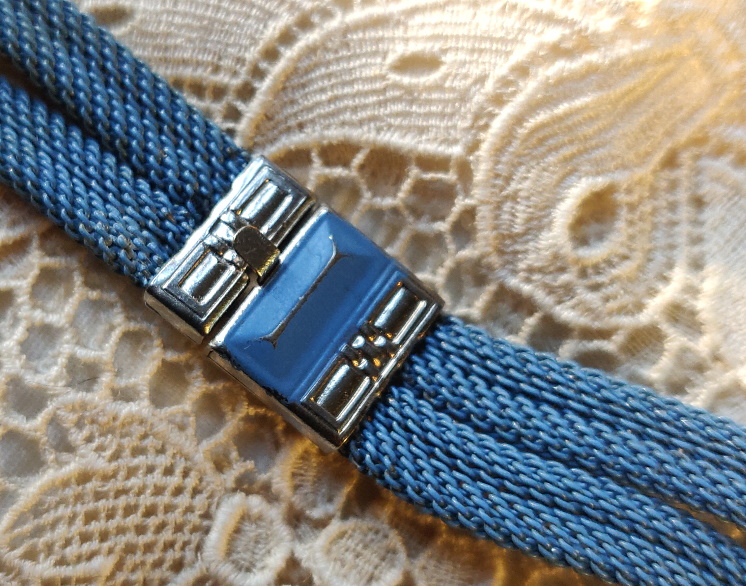 A helpful reader very kindly shared these photos of a pristine-condition blue colorway of a necklace previously seen only in green. This necklace originally had a matching bracelet but it’s not known whether they were actually sold as a set at that time. You can see the green set in Yet More 1930s Mystery Maker Jewelry, about three-quarters of the way down the page. The central station of this design was resurrected and slightly adapted by Christian Dior during the 1970s.

This interesting necklace’s design was once only an MJM-Maybe until 2017 when I discovered the central station used in a bracelet with a matching definitely-MJM necklace. This, and the other necklace, strike me as having an ancient Sumerian/Phoenician look and so that’s what I’ve been calling these. The only other necklace in this exact style, was also in silvertone but with one difference: there was a turquoise glass stone in the middle of the center station. So, this is the no-stone version. It is 15.5” long. 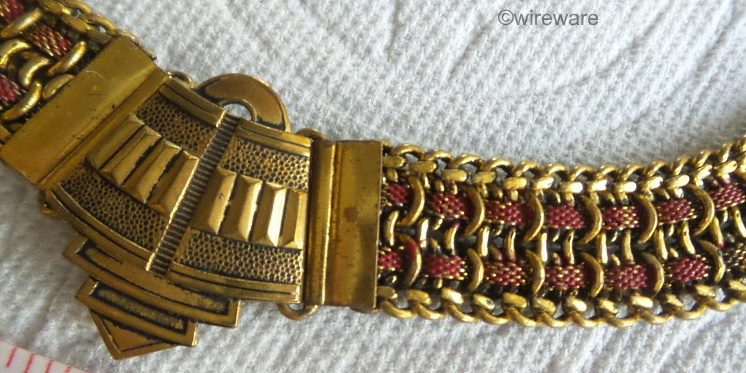 This is the totally unexpected find, because although I had discovered one (and only one, thus far) example of their Ribbed Architectural front clasp being paired with this new-to-me chain, this necklace goes one better: Threaded through two rows of chain links is a length of their narrow (only 1/8” wide) flat mesh chain. That chain itself has only been seen in less than a half dozen necklaces, and always by itself – not combined with anything else.

Here is the same necklace but without the ‘ribbon effect’ of the added mesh chain; it was shown in my early 2018 update post. What puzzles me is that the overall length of the newfound one was stated as only 14 inches – if that’s true, this is technically a ‘collar’ rather than a ‘choker’ necklace. One would need to have the proverbial “swan neck” in order to wear this one comfortably!

Browse the other posts in this series

Descriptive index of all Mystery Maker jewelry shown on this site

← Living An (Almost) Fragrance-Free Life
Cats, Big and Small, by Connoisseur of Malvern →