Some art porcelain sculptures were given a real dose of ‘glitz’ over and above the rather typical enhancement of accents of 24k gold paint. Three studios also added components made of gold, sterling silver, or precious gems.

Sterling Silver: Connoisseur of Malvern and Boehm of Malvern

The original Connoisseur of Malvern studio incorporated custom-crafted sterling silver elements into three of their equestrian studies designed by Richard Sefton. All of the 925 sterling components were crafted by silversmith Clive Willets, of Kinver in Staffordshire.

Sefton, an edition of 25 in 1983, is 21” high and 17” wide, exclusive of the wood base. The sterling silver elements are the sword and scabbard, stirrups, bit and curb chain. This was Mr. Willets’ first such commission for Connoisseur but it would not be his last. 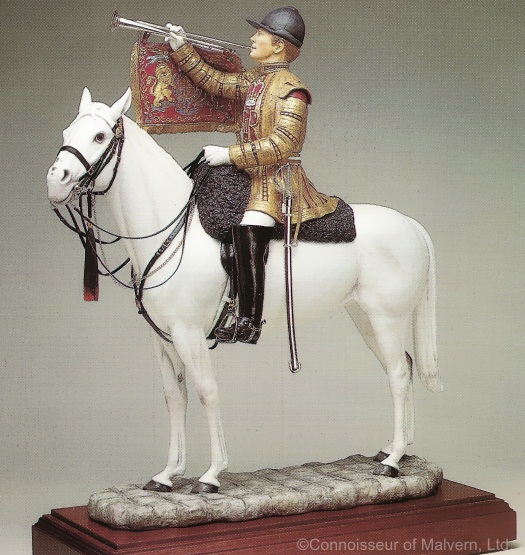 The full name of this 1984 limited edition is Trumpeter of the Life Guards on Delilah. Only ten of these were made; it is 22” high and 21” wide. The sterling silver components here are the same as on Sefton but with the addition of the trumpet itself. All crafted by Clive Willets. 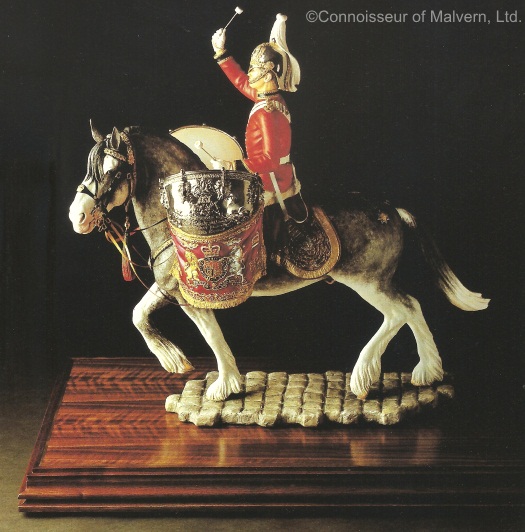 Drummer on Coriolanus is a tour de force of silversmithing and I do wish I had a better photo of the incredible detail on the kettledrums. Mr. Willets also created several other elements of the horse’s trappings, and the drumsticks. This sculpture was an edition of 10 introduced in 1984.

The Boehm of Malvern studio used sterling silver for the base of four of their butterfly studies. According to Antony Halls, who worked on them,

The subjects were Adonis with Sea Holly, Small Copper with Fir Cone, Painted Lady with Wild Rose, and Small Tortoiseshell on Bramble…The butterflies were porcelain and the bases were sterling silver.

Sadly, I have so far been unable to locate a picture of any of these. If any reader has one, I would love to add it/them to this post! There is a contact form on the About the Chatsworth Lady page.

Although the use of metallic gold paint on porcelain was common at porcelain studios, the incorporation of actual (three-dimensional) cast gold elements was not. During the late 1970s, Laszlo Ispanky introduced a series called Golden Touch, the first four designs having an 18k gold element. I am not entirely sure which of the following pieces were in that series, however, because I’ve not found any advertising specific to it. 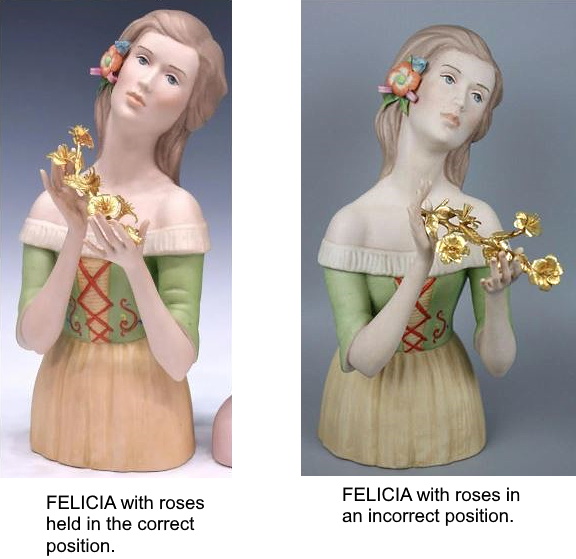 Felicia is just about 11” high and was an edition of 100. The backstamp identifies her as being by Ispanky Arts, Ltd (one of several corporate names that the artist attached to his studio over almost two decades) and also notes “18 Karat Solid Gold Parts”, meaning the spray of roses. The weight of the flower spray is just over 48 grams. Because it was simply glued atop her fingers, the attachment was not particularly secure. A former Ispanky collector told me “Most of these get cannibalized; the gold is removed and sold, leaving the porcelain worthless.” If not completely missing, an accidentally-dislodged rose spray might be glued back in the wrong position, as shown in the images above! 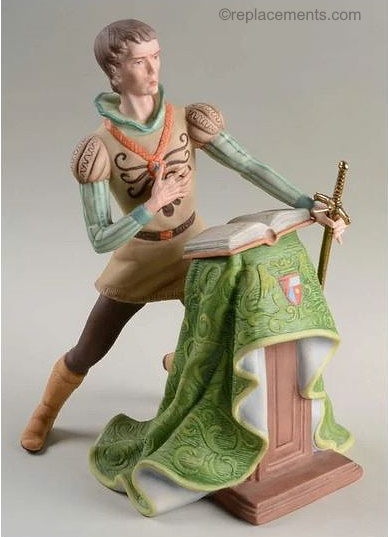 King Arthur’s sword Excalibur is the 18k gold element here, as well as the name of the piece. This, too, was an edition of 100 although the backstamp says Ispanky Porcelains instead of Ispanky Arts. This piece is 12” high. 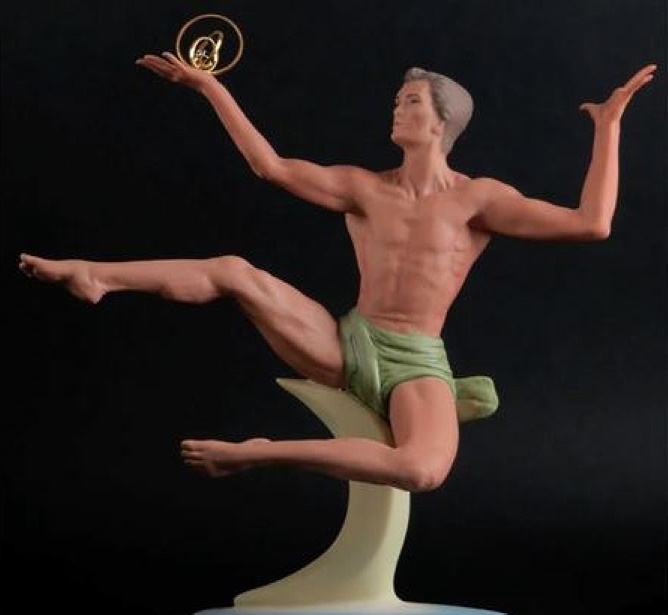 The sphere held by the male subject of The Quest is marked 14k gold and has a tiny gemstone in the center. This was an edition of 50 and is about 13” high and wide. Marked Ispanky Porcelains. 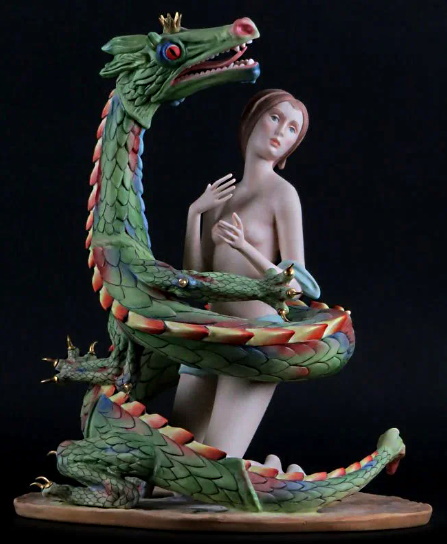 There are several gold elements on the dragon in Beauty and The Beast: his crown, his claws, and several balls accenting his scales. I do not know whether they are 14k or 18k, however. Not having seen a photo of the marking on this edition, I don’t know whether this was part of the Ispanky Arts/Ispanky Porcelain Golden Touch series but it seems likely. 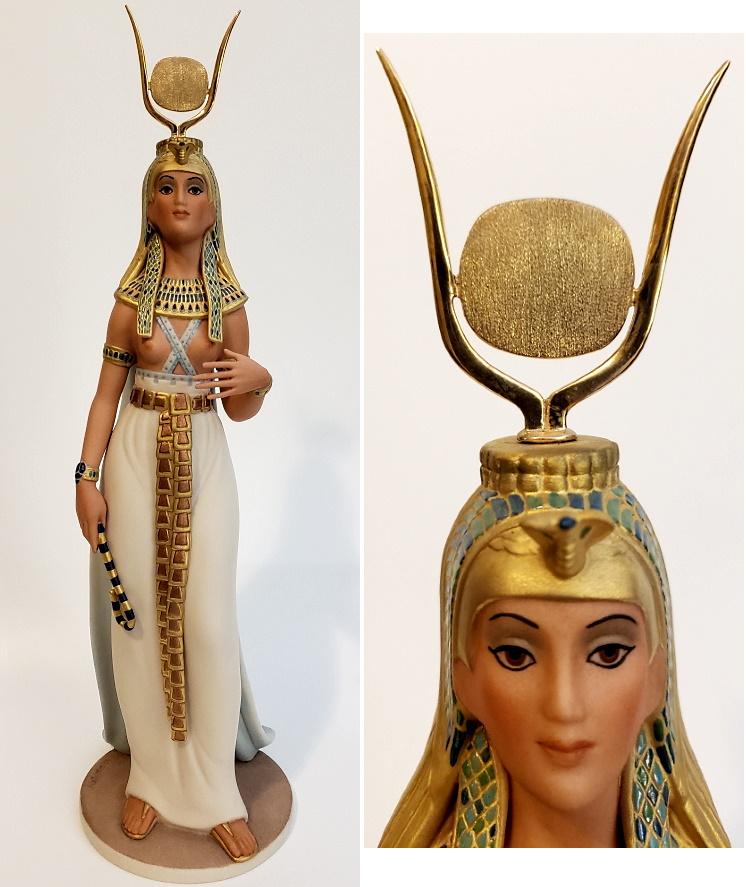 Cleopatra was designed in 1978, during the period where Ispanky was under contract with Goebel, and was an edition of 450. She is 13” high, and her headdress, made of 14k gold, weighs 11 grams. The Goebel pieces were not part of the Golden Touch series.

The cross atop the crown worn by Boris Godunov is made of 14k gold and was also a Goebel-era edition of 100, just over 12” high.

This rare Ispanky piece is Tekiah, with a gold shofar (ram’s horn) of unknown carat weight. The sculpture name refers to the sound that the horn makes, not to a proper name.

In 1977, Boehm introduced an eight-piece series called the Gem and Gold 400 Collection. The gold in this case refers to the 24k metallic gold paint; the gem component was (in all but one piece) the eyes. The 400 references the edition size of each piece. Some of the designs were also, or had previously been, available in normally-painted and/or non-gem-accented porcelain. Retail prices for the glitzy series ranged from $300 to $950.

This is the backstamp format Boehm used for this series. The small Au inside the lower part of the G is the abbreviation for gold in the Periodic Table of the Elements.

There were actually three versions of some of the pieces in this series: the standard porcelain version, a gold-painted version but without gemstone eyes, and the “Gem and Gold” version. For example, the standard painted African Elephant is Boehm design number #200-44 and the gold painted one is 200-44G; but the gold with gemstone eyes has a backstamp like the right-hand example above (but with a G&G series design #1 instead of 3 or 6, in this case.) The handwritten number is the individual sculpture number. 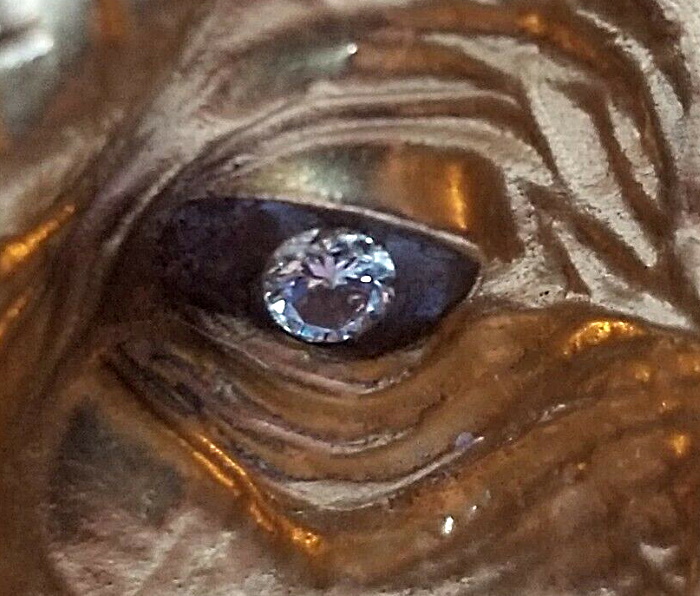 The Elephant was design #1 in the Gem & Gold series and has diamond eyes. It’s almost 8” high and 10” long. It sold for $950. This is cast from the same mold as the all-porcelain African Elephant. 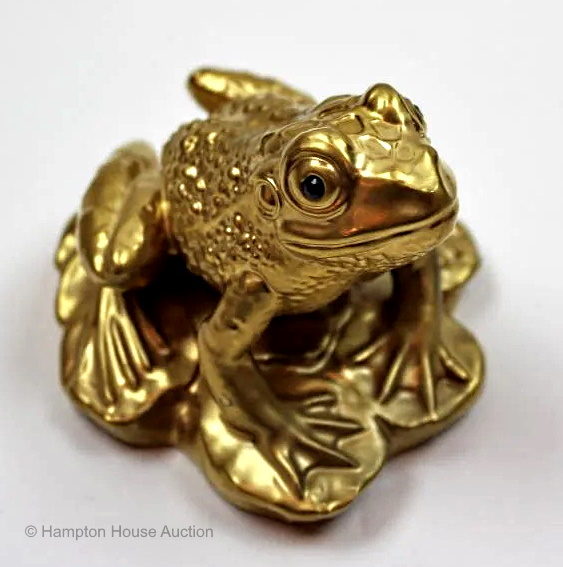 The Colt has emerald eyes and sold for $650. This mold, which is 5.5” high and has a 4.5” footprint, is the same as their standard Colt #40123 that was sold in two colorways (palomino and chestnut) during the same years. The G&G design number is #5.

The Poodle (design #6) originally appeared during the 1950s as a glazed color piece, but was resurrected two decades later for this series. It is 5” high, has ruby eyes, and sold for $400. 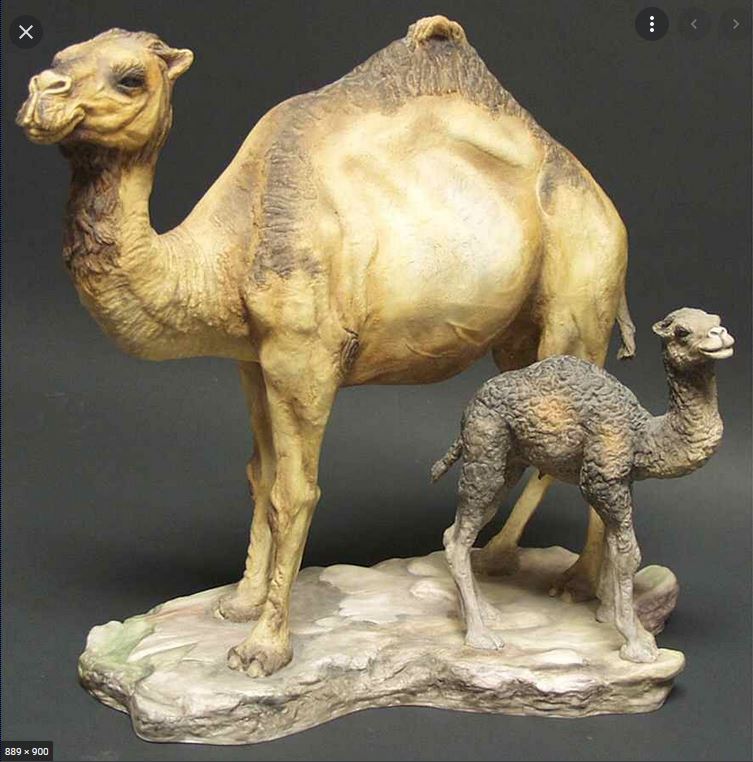 The standard Camel Calf was combined with an adult camel to form the porcelain Arabian Camel and Calf design #500-10 produced at Boehm of Malvern in 1978. 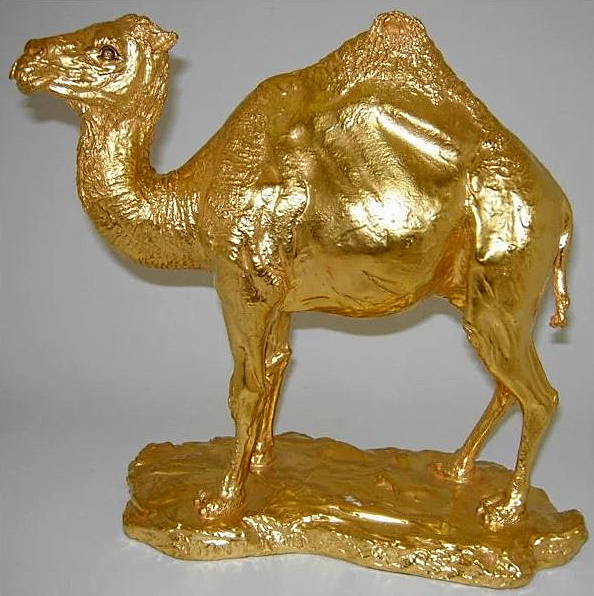 Two additional designs were added after the release of the original eight. The Adult Calf with diamond eyes was design #9, and naturally there was…

..a Gold/Gems combo version as well! The pricing of this piece is not known, but it definitely was design #10 and completed the series.

The original 1977 ad for the Gold and Gems series mentions an un-pictured Rose with Diamond Dewdrop as part of the collection. The cited size of 11” long suggests that it may have been a single rose stem, but I have been unable to find an image of it. It sold for $500. By process of elimination, it was either #7 or #8 (the other candidate is the Camel Calf.)  I do wonder if they reached the original production goal of 400 pieces for any of these, however, because something like this definitely falls into the love-it-or-hate-it category! 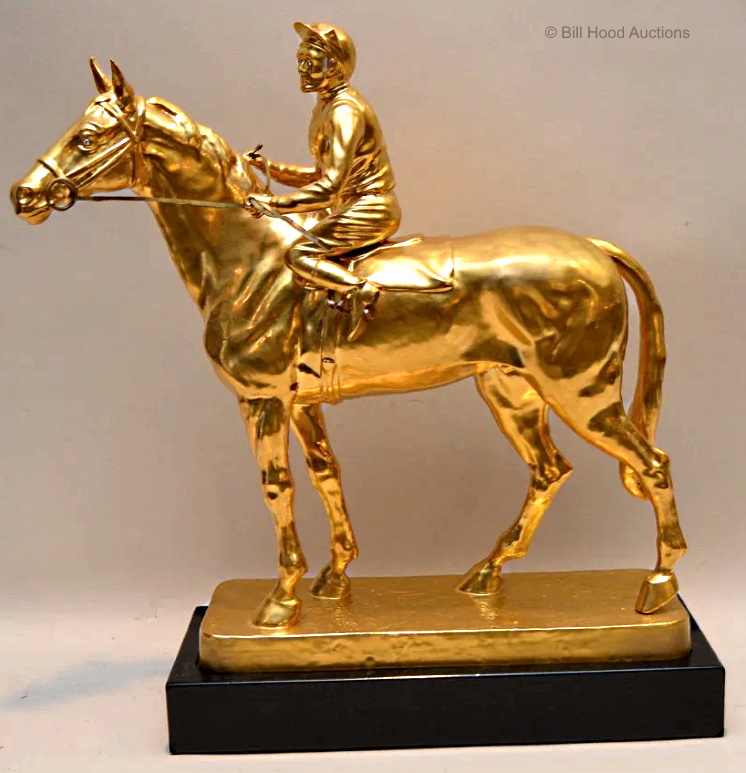 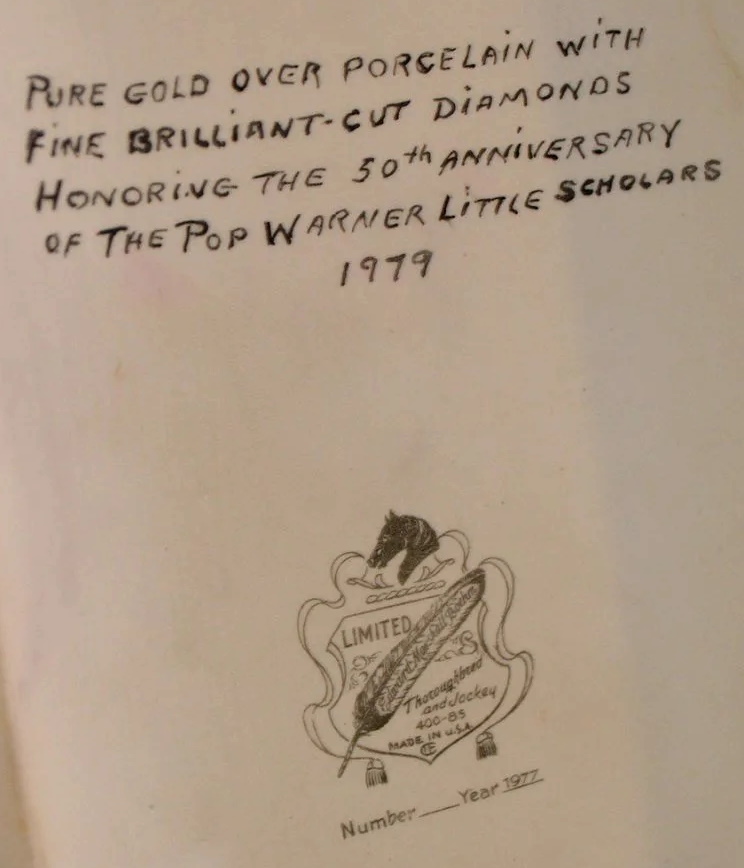 This piece was not part of the Gold and Gems 400 series and is a one-off, gold-painted and diamond-accented version of Boehm’s #400-85 porcelain Thoroughbred and Jockey. It is approximately 15” high and wide.

Ten years after the appearance of Trenton’s Gold & Gems 400 series, the Boehm of Malvern studio issued a lovely edition called Eggs of the Seasons in 1987. Each egg contains a gold-plated bronze miniature figure inside, each having a diamond accent. The miniatures were made at Boehm of Llandow. The two eggs shown above are the Spring and Winter eggs, with a tiny rabbit and a duck. Additional photos are in the Boehm of Malvern, Part 3 post.

The next/final post in my Porcelain Plus series will take a look at how other types of metal components were cleverly disguised.

More in the Porcelain Plus series: