The original Connoisseur studio created two types of hand-painted porcelain plaques: flat-painted and dimensional. All the dimensional plaques are botanical subjects and were produced in a variety of sizes and editions.  They are shown below in chronological order by introduction year.

The first Connoisseur plaques were issued in 1981 which was the second year of the studio’s operation. Both were commemorative editions. 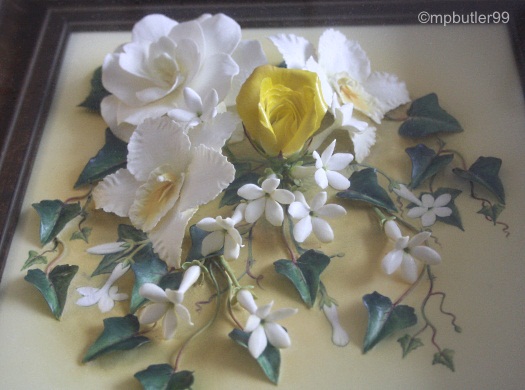 This is the Royal Wedding Plaque celebrating the marriage of Prince Charles and Lady Diana Spencer. The backstamp states that the design was “Inspired by the wedding bouquet carried by Lady Diana Spencer at her marriage to His Royal Highness the Prince of Wales on 29th July 1981”. This plaque was an edition of 150 produced for and sold exclusively by the long-established Mulberry Hall fine china and crystal shop in York, which closed in 2016 after 60 years in business. Likely designed by a collaboration between Diane Lewis and Wendy Green, the plaque is 14″ x 17′ and 3.5″ thick including the frame.

Bridal Posy was an edition of 100 (not a retailer exclusive) for the 1981 Royal wedding as well.  It is 9” x 12” framed, and came in a custom-made sized silk-lined box bearing the Connoisseur logo.

An undated but definitely 1980s retailer price list includes a Baby Talk Rose plaque as an edition of 15, priced at $1200. Unfortunately, this is a text-only list and thus no image was included. The Roses post shows the sculpture of the same name, which commemorated the birth of Prince William in 1982; it’s possible that this plaque may have been issued for the same purpose. If anyone happens to have one and would like to send a photo of the plaque and its backstamp, there is a contact form on the About the Chatsworth Lady page.

An eight-design series of limited-edition botanical plaques was called “Shakespeare’s Flowers”, each of them portraying a flower mentioned in Shakespeare’s plays. They measure approximately 9” x 12” (framed) and were designed by Diane Lewis. Two plaques were issued each year from 1981 through 1984, starting with Harebells and Violets. 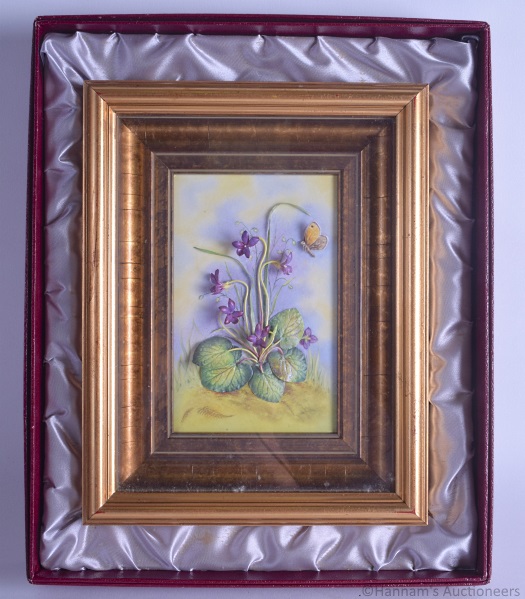 The backstamp identifies each as a part of this series and includes the quote upon which the study is based; a certificate also accompanied each. The plaques were originally sold in a custom silk-lined box. 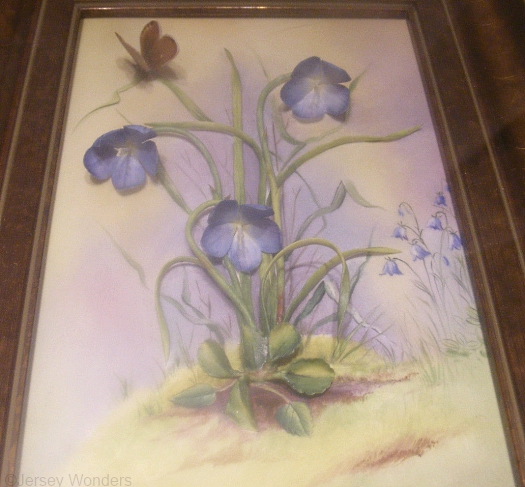 Harebells was an edition of 100. It shows the wild harebell, Scilla nutans, also called wild hyacinth. Several spring-blooming blue “bell” wildflowers are variously called bluebell, harebell, or hyacinth in both the UK and USA. The genus Scilla contains white and pink flower forms as well as blue.

“Thou shalt not lack the flower that’s like thy face, pale primrose, nor the azur’d harebell, like thy veins” – Cymbeline 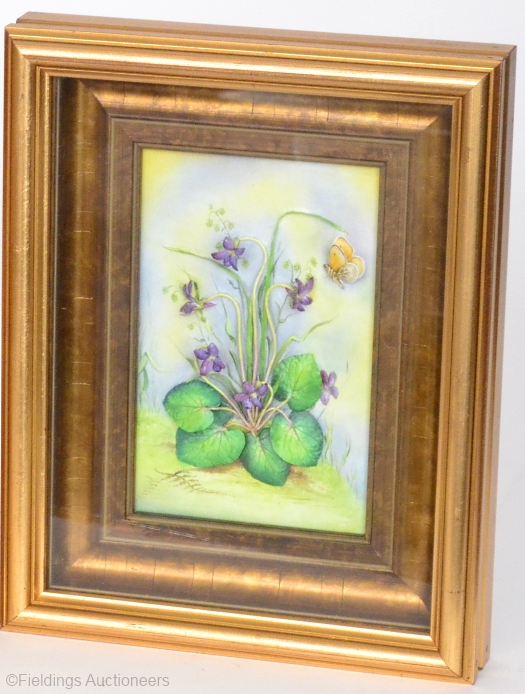 Violets was likewise an edition of 100.

“I know a bank where the wild thyme blows, where oxlips and the nodding violet grows” – A Midsummer Night’s Dream

With the 1982-1984 issues, the edition size was cut to 50 although the size of the plaques and the framing remained the same as the first two.

“Where the bee sucks, there suck I. In a cowslip’s bell I lie” – The Tempest 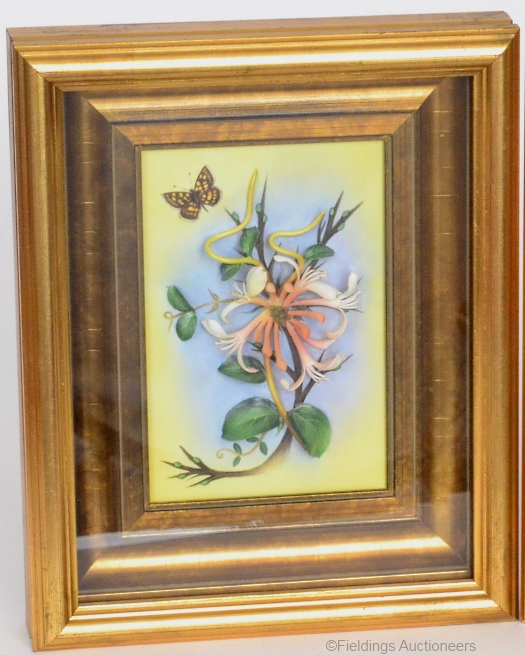 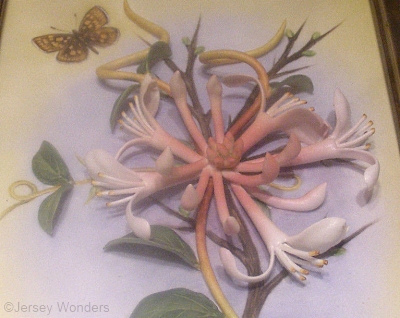 Honeysuckle was issued in 1982 as well.

“So doth the woodbine, the sweet honeysuckle, gently entwist..” – A Midsummer Night’s Dream 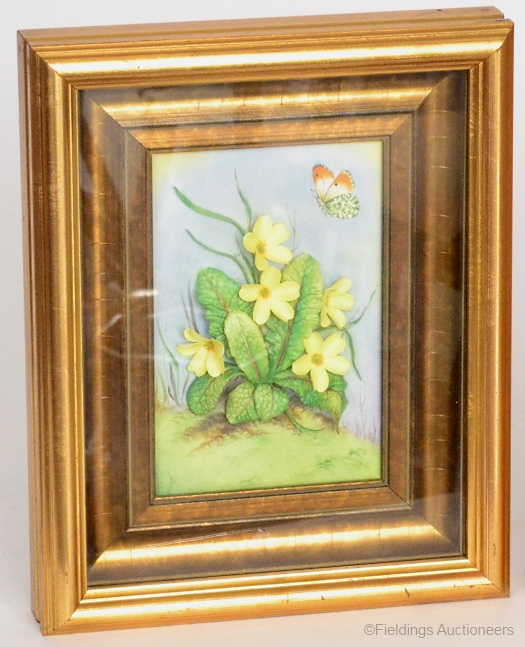 Primroses was one of the 1983 issues.

“And in the wood, where often you and I upon faint primrose-beds were wont to lie.” – A Midsummer Night’s Dream

“When daisies pied, and violets blue
And lady-smocks all silver-white
And cuckoo-buds of yellow hue,
Do paint the meadows with delight” – Love’s Labours Lost

Columbines was issued in 1984.

“I am that flower…that columbine” – Love’s Labours Lost

Wild Roses was also one of the two final issues, in 1984.

“What’s in a name? That which we call a rose, by any other word would smell as sweet” – Romeo and Juliet

Returning to the non-Shakespearean dimensional plaques, in chronological order: 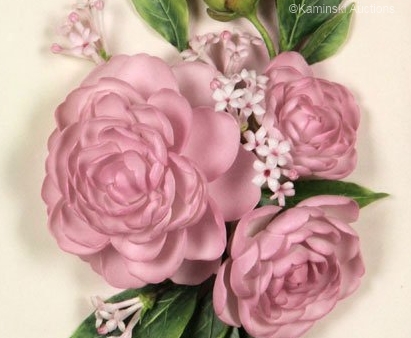 Lavender Blue was also an edition of 10 from the same era and of the same dimensions as Pink Perfection.

Fields of Autumn reminds me very much of the 1985 sculpture named Summer Harvest which is shown in the Limited-Edition Flowers post. It has the same dimensions as Pink Perfection and Lavender Blue. 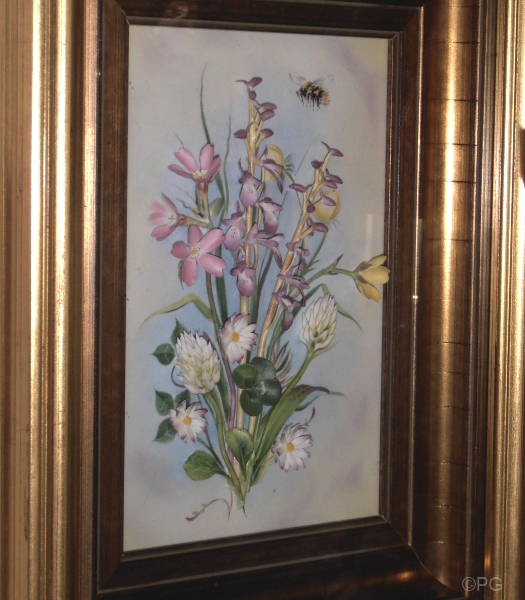 Lucky Charm was an edition of 50 in 1986, designed by Freda Griffiths, to commemorate the wedding of Prince Andrew and Sarah Ferguson.  It is the same size as Bridal Posy.

In 1987 the studio introduced a series of plaques based on the four seasons. Each was an edition of 50 and measure 9”x12” framed. 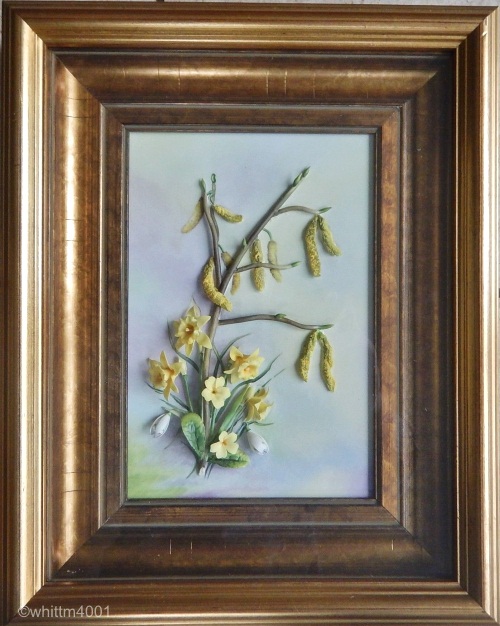 Blush of Spring offers the earliest blooms of snowdrops, primroses, narcissus and fluffy catkins. There is no butterfly in this study, because it’s too early for any to emerge!

Berries, fruits and acorns steal the show in Shades of Autumn although there are still some late bloomers as well.

Connoisseur followed this with a series of four plaques in 1989 showing flowers and fruits/berries. These too are editions of 50 and measure 9” x 12” as framed. 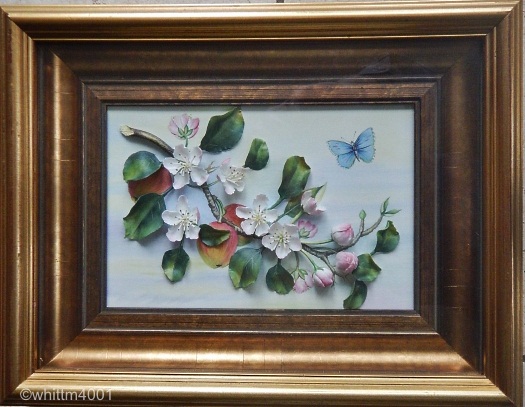 Crab Apple celebrates the well-known spring flowering trees of the Malus species. Although the small fruit is too sour for many tastes, rootstocks are sometimes used to improve domestic apple varieties. 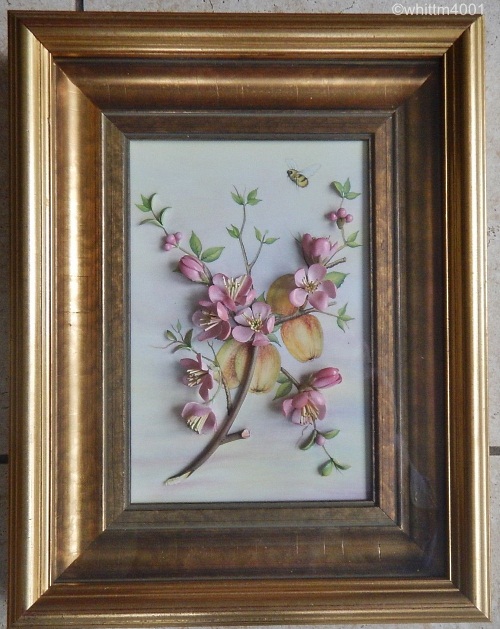 Quince can refer to either the edible species (Cydonia oblonga) or the ornamental (Chaenomeles spp., often called ‘Japanese quince’) although even the ornamental species can produce fruit. 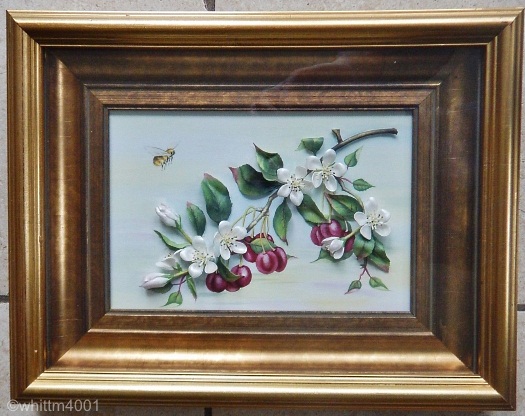 In the UK, the tree most often called Wild Cherry is Prunus avium, the ‘bird cherry’; however, in the USA the name is sometimes also applied to Prunus serotina. Both species are favorites of birds and caterpillars.

Sloe depicts the flowers and fruit of Prunus spinosa, also called ‘blackthorn’ because of its dark colored bark. Sloe gin is a mixture of gin, sugar, and sloe fruits infused together to produce a liqueur.

This chinoiserie-style plaque is titled Ikabana. The detail in the basket is truly amazing, as are the flowers, of course. This was an edition of 25 in 1989, and I am very grateful to Connie Sommer for taking and sharing these photos. is about 15.25″ high and 19.5″ wide, framed as shown. The artist icons in the backstamp reveal that the dimensional flowers were made by Wendy Green, and the painting was done by Freda Griffiths. The word ikabana is an alternate spelling of the more familiar ikebana. Connoisseur produced a sculpture during that same year (1989) that they titled Ikebana but was of entirely different design; it is an arrangement of chrysanthemums and pine atop a decorative platter.

I recently became aware that the studio produced a number of small dimensional plaques that I had not come across in any advertising literature I currently have. Hopefully more of these will turn up in the future for documentation!

This holiday-themed miniature oval plaque is called Memory Lane. Issued in 1988, it is autographed in 1989 by its designer, Chris Ashenden. It is only 4.75″ high.

There were fewer non-dimensional (flat painted) plaques from the studio, and at least two of them were one of a kind.

Connoisseur created a special series of six plaques for the Fort Royal Galleries store in Worcester, although I do not know the issue year. The designer of these plaques was Freda Griffiths, and they are 6” x 8”.

I am assuming that they came framed, but do not know for certain; the photos below were all from a 2013 UK auction sale. I subsequently saw an additional example of the Snowdrops plaque offered in the USA, but that one was framed quite differently. Thus, it is possible that the plaques were originally sold unframed, leaving the framing up to the purchaser (especially if the Fort Royal gallery also offered framing services.) 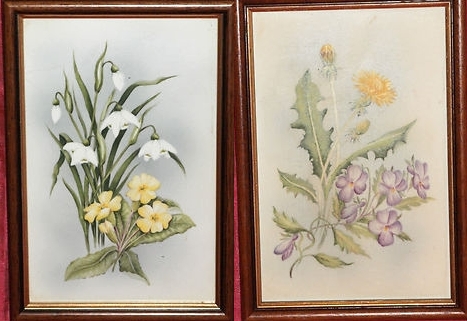 The next two flat-painted plaques are one-of-a-kind. 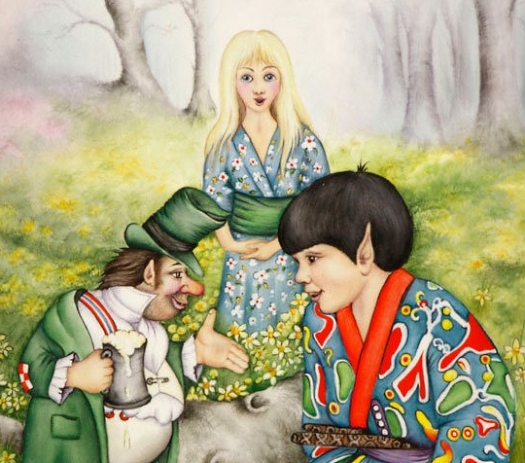 The Human Figures post includes two 1986 Connoisseur sculptures based on James Clavell’s children’s book Thrump-O-Moto. This plaque is a one-of-a-kind painting on porcelain by Sandy Griffiths, whose mother Freda Griffiths was also a Connoisseur artist. It shows the three main characters (Patricia, Charley Rednosebeerdrinker, and Thrump-O-Moto) in a flowery meadow. The overall (framed) size is 18.5” high x 13.75” wide; the viewable area is 15” x 10.5”. 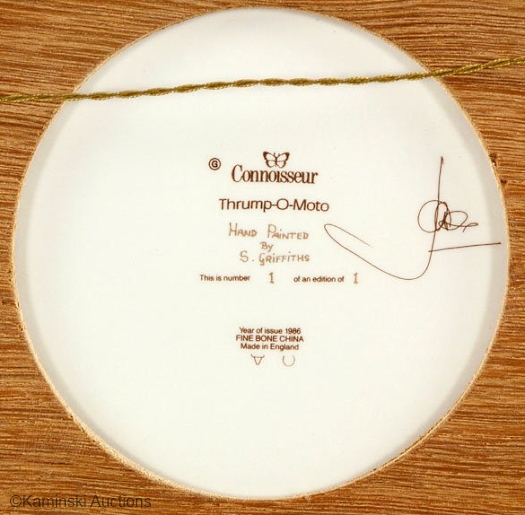 The Thrump-O-Moto plaque was sold already framed and with the backstamp visible through an opening in the wood ‘mount’. The autograph shown is that of J.R. Roberts, who designed the Charley Rednosebeerdrinker porcelain figure. 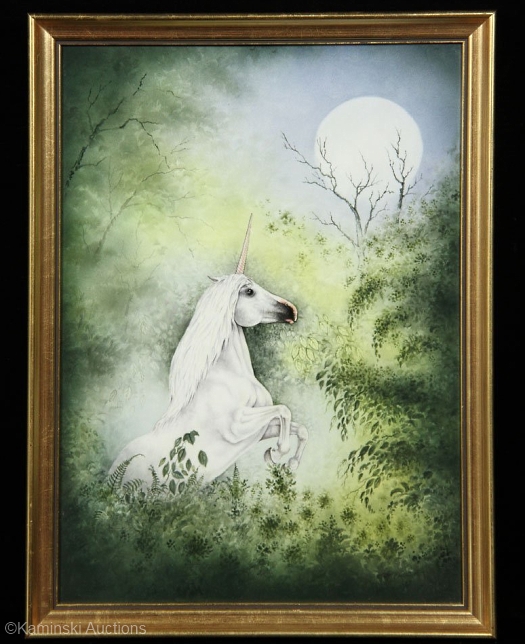 Another one-of-a-kind plaque/painting was Silver Mane, an evocative portrait of a unicorn in a misty moonlit forest. Painted by Anthony Tomson in 1987, it is approximately 15” high and 11” wide; framed dimensions are 16.5”x 12.25”. It is mounted in the typical Connoisseur method with a wood back incorporating a circular cutout through which the backstamp area is visible. The artist icons indicate that Mark Farmer also worked on this portrait.

← Disney Princesses in the Garden
Ruthless →